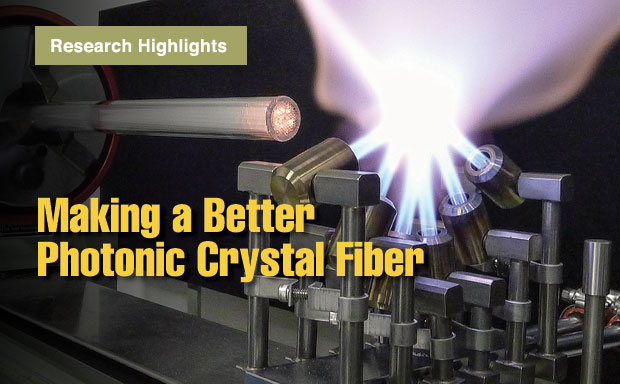 At Lawrence Livermore’s new fiber fabrication facility, the outer tube of a photonic crystal fiber preform is shrunk slightly in diameter on the glassworking lathe before being placed vertically in the facility’s draw tower.


Culminating several years of successful modeling and experimentation with novel optical fibers, scientists at Lawrence Livermore have succeeded in fabricating ribbonlike photonic crystal fibers (PCFs) and using them to create optical lasers, amplifiers, and oscillators. These accomplishments were made possible by the installation of a fiber fabrication facility within the National Ignition Facility (NIF) and Photon Science Principal Directorate. The facility features an 8.2-meter-high draw tower with a furnace capable of temperatures above 2,000°C and offers a unique capability within the Department of Energy (DOE) complex.

In addition to the tower and its furnace, the facility also includes a computer-controlled mechanism for pulling the fibers and a glassworking lathe. With this new capability, Livermore scientists can produce custom optical fibers with intricately detailed cross sections. Unlike the bulk fibers produced by the telecommunications industry, which are completely solid and circularly symmetric, the rectangular-shaped Livermore fibers are manufactured with asymmetric patterns of holes and various materials that run the length of the fiber. These filaments of glass are just a few hundred micrometers thick but sturdy enough to withstand the extreme experimental conditions in high-power, high-energy lasers. The fiber fabrication facility enables fundamental fiber laser research for future laser missions, such as defense and basic science, and the development of fibers for sensor, medical, and communications applications. Scientists predict a multitude of other applications as advancements are made in the technology.

Lasers being developed by Laboratory scientists for missions in defense and basic science typically require high-quality beams that are diffraction-limited and operate at average power (more than 1 kilowatt) and high energy (more than 10 millijoules). For a long time, experimental studies showed that even lasers made of PCFs would fall short by two orders of magnitude for many applications. This limitation, it turned out, lies partly in the circular symmetry of optical fibers first developed in the 1970s for the telecommunications industry. To overcome this obstacle, Livermore scientists created an entirely new waveguide geometry: the ribbonlike PCF. (A waveguide is a device that confines and directs the propagation of electromagnetic waves such as light.) The researchers computationally modeled and tested the concept, and they met many technical challenges, including fabrication and mode-conversion techniques and scalability issues. (See S&TR, June 2011, A New Shape for Optical Fiber Lasers.)

The light-guiding portion of a ribbon fiber is rectangular with a high width-to-height aspect ratio—similar to a ribbon of light. “By breaking from the telecom norm and making these ribbonlike fibers, we improve our lasers,” says Livermore physicist Mike Messerly, who fabricates the fibers. “The rectangular core increases the surface area for heat removal, thus extending the thermal limit for power scaling.”

PCFs, a relatively new class of optical fibers, have a built-in microstructure consisting of a series of closely spaced holes that run along the length of the fiber and guide the light while blocking it from exiting the sides. PCFs derive their properties not from the glass composition but rather from the diffractive configuration of the optical holes. The fibers can be fabricated from a single material—pure silica—so they are more resistant to radiation than traditional optical fibers. The configuration of holes can be designed for the specific needs of each application. PCFs can confine light using lower-refractive-index cores or even hollow cores. The hollow-core fibers are particularly useful for Laboratory applications. The hollow replaces glass that can melt and fracture, so the fibers have a higher damage threshold at high temperatures.

Most importantly, these fiber lasers can scale up to higher laser powers than previously achieved. “The scalability of the new structure is much higher than that of earlier designs,” says physicist Jay Dawson, who leads the multidisciplinary team working on developing, fabricating, modeling, and testing the fibers. “We met our goal to demonstrate we could amplify a single, higher-order mode and convert that back to a single beam.”

One application for the technology is for use in injection-seed lasers. “For example,” says Dawson, “NIF is essentially a giant amplifier. A laser shot begins with a small laser from which a pulse is carved and then amplified in a series of amplifiers until the pulse becomes very powerful.” Ideally, Dawson would like to see these fibers used more extensively in injection-seed lasers. He believes future laser facilities would benefit by incorporating the improved power and energy capability enabled by the novel fibers.

When fabricating the fiber, the type of light that it will guide is a major consideration. For basic science applications, pulses of light are needed to create bursts over a very short period of time—a mere 10 nanoseconds of ultraviolet light for inertial-confinement-fusion missions. Even shorter periods are needed for applications in high-energy physics, medicine, and fundamental materials research and development. Transporting these pulses turns out to be challenging for scientists. “If the bursts are energetic enough to melt a target, they might also be energetic enough to melt the fiber,” Messerly says. Ultraviolet light, in particular, tends to dissociate the molecules that make up glass. “We need to have a fiber that has a large light-guiding region to prevent that from occurring. We are working on special fibers that can transport extremely high-power lasers and high-pulse energy lasers.” These fibers will enable new applications for lasers by allowing light to be efficiently delivered into hard-to-reach places. 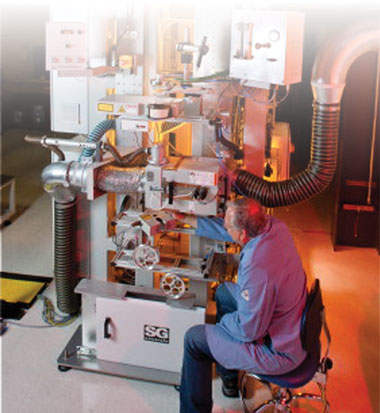 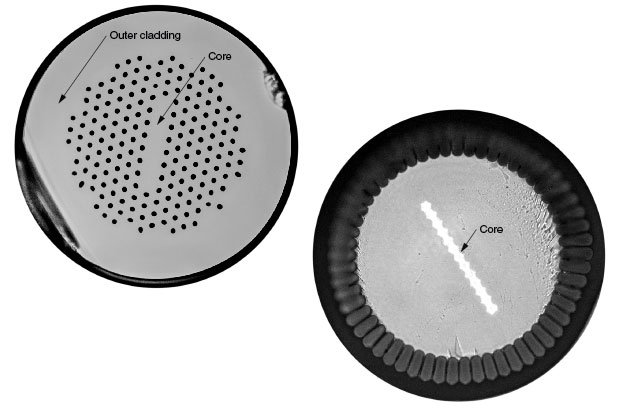 Some of the novel optical fibers being drawn at Livermore have intricate cross sections. They derive their properties from a series of closely spaced holes that run the fiber’s length. The configuration of these holes is customized for each application. As shown in these microscope images, the light-guiding portion (core) of a ribbon fiber is rectangular.

First envisioned three years ago, the tower began drawing fibers in the fall of 2011. About two stories high, the tower is small compared to the 10-story-high towers used in the telecommunications industry, whose fibers must span continents. “We do not require such a high tower because the fibers we fabricate for lasers are shorter—about 10 meters long,” says Messerly. Researchers have since used the fabrication tower to draw hundreds of kilometers of custom fibers and have produced fiber lasers that are theoretically scalable beyond the limits of conventional circular-core fibers.

In the fiber fabrication process, a glass preform is fed through a tube at the top of the furnace. As the glass drops, it melts and is drawn out. The initial product looks almost like a teardrop-shaped Christmas ornament, but the control system quickly regulates the width of the strand to a constant diameter. The faster the glass is pulled, the thinner and more flexible it becomes.

The fibers are made in a two-step process: First, a hollow tube of glass a few centimeters wide is pulled down to form hollow capillaries about 2 millimeters in diameter. Next, about 200 of these capillaries are stacked together in an array and drawn through the furnace again, this time to a diameter of a few hundred micrometers. Further steps follow to create the ribbon fibers and ultimately the laser, which is made with rare-earth-doped glass incorporated into the core.

Manufacture of the Livermore optical fibers involves multiple steps. Here, a circular, sleeved stack of rods and tubes, already drawn through the tower mechanism, is placed in a glassworking lathe to be tightened and prepared for its next round in the draw tower. The finished fibers will be just a few hundred micrometers thick.

Guide star lasers are an example of an application for transport fibers, and the Laboratory has already provided lasers used at the Lick and Keck observatories. A flexible fiber could simplify the transport of guide starlight from the source to the launch point. Existing conventional fibers cannot transport the required power over the required distance. In the field of medicine, hollow-core PCFs could help perform robotic surgery by transporting short pulses of light from a laser into a patient.

Optical fiber sensors may need more research and development before they become feasible on a large scale, but the possible applications are virtually endless. Fiber sensors have already been deployed in downhole oil and gas sensing, and ultralight, ultraprecise fiber-optic gyroscopes are guiding aircraft and drones. In the future, optical fiber current sensors could be used to measure high voltages.

Furthermore, DOE and scientists at SLAC National Accelerator Laboratory have expressed interest in laser-based particle accelerators. “Traditional accelerators based on radio-frequency technology would be scaled down to optical wavelengths by taking a hollow-core optical fiber and shooting light into it to make an accelerator,” Dawson says. He believes the technology needs some two decades of further research, and he is on the organizing committee to create a road map for the application of lasers to accelerators.

While some applications of these novel materials are still many years away, Dawson and his team have demonstrated the Laboratory’s capability to stay ahead in the area of fiber optics. The unconventional fiber waveguides being developed at Livermore are of great interest to the Department of Defense and DOE for laser missions, and they promise to dramatically change accelerator design for scientific research in this century.