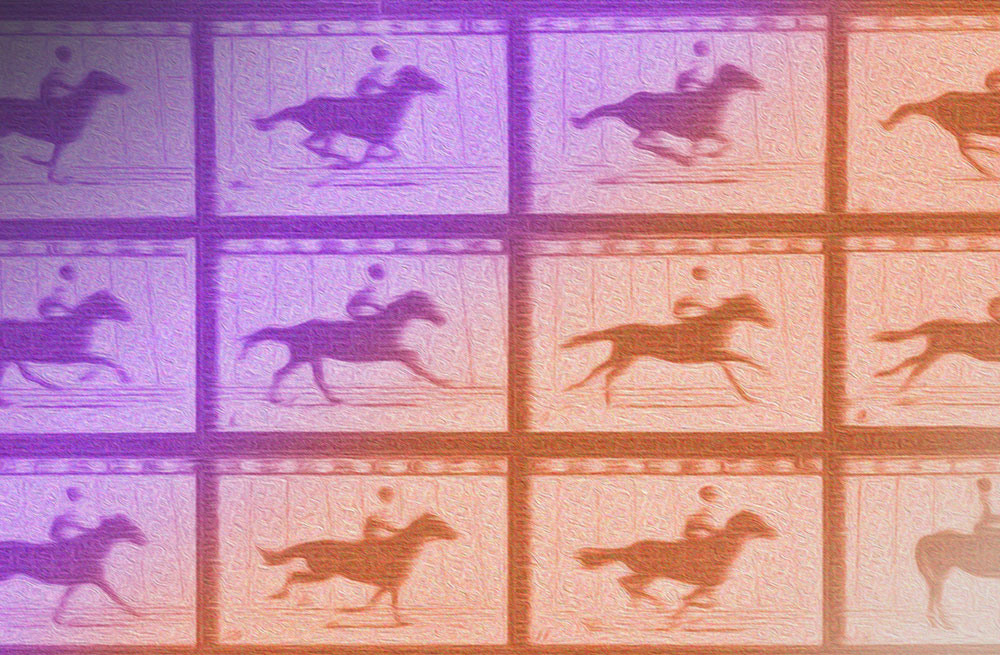 Cinema in a Nanosecond

Just as sports photographers must clearly capture chaotic movement on the playing field, Lawrence Livermore personnel must photograph experimental detonations in action. In the Laboratory’s hydrodynamic tests, devices experience temperatures and pressures that imitate the initial stages of a nuclear explosion—conditions so extreme that rigid materials instantaneously exhibit fluid properties. Such tests, which are essential for studying material dynamics and informing computational models, would be impractical if only the aftermath of an explosion could be analyzed. Instead, scientists must study the entirety of implosion behavior, in high detail, to assess nuclear stockpile operability and longevity, a core directive of the Stockpile Stewardship Program.

To analyze nearly instantaneous effects, pulses of x-ray light just nanoseconds in duration are fired off at microsecond intervals, penetrating objects to examine their interior effects similar to a medical x-ray procedure. Successfully acquiring even one snapshot represents significant scientific and engineering developments and a collection of complex instrumentation. But one image only reveals so much. A Livermore team headed by Jennifer Ellsworth, the Linear Induction Accelerator (LIA) Program group leader, is developing a method to obtain dozens of back-to-back diagnostic images. The technology—an improvement over earlier attempts to achieve multiple images—will drastically reduce the time and cost associated with testing while capturing more data than ever before.

“If we want to understand the evolution of these systems, we need to take a series of images,” explains engineer Katherine Velas, part of the LIA group and a member of the Pulsed and Electrical Power Group in the Laser Systems Engineering and Operations Division. She displays Eadweard Muybridge’s iconic work, The Horse in Motion—famed photographs that settled an age-old debate by revealing that all four horse’s hooves are, at one point, simultaneously airborne during gallop. Velas establishes parallels between the 150-year-old images, considered by some to be the birth of moving film, and the team’s current endeavor toward x-ray movies. “For the longest time,” she says, “acquiring multiple images meant performing multiple experiments, each of which demands immense investment and coordination. Think about all the variables that may change just slightly between tests. By acquiring a multitude of images from a single experiment, we’re eliminating variability, obtaining more precise data, and significantly reducing the cost of testing.”

X-ray diagnostics for nuclear-related testing dates back as far as the explosive devices themselves. However, x-ray imaging requirements have posed significant limitations on the types of tests conducted and the information gleaned. Early systems yielded only one image—or “radiograph”—of experiments, leaving uncaptured dynamics to be inferred by modeling. Given the substantial cost incurred with each experiment, the pursuit of ever more frames has continued. Livermore’s Flash X-Ray (FXR) system housed at Site 300’s Contained Firing Facility generates two diagnostic frames for each experiment. (See S&TR, July/August 2018, X-Ray Machine Does Double Duty.) A multilaboratory accelerator effort, Project Scorpius, will provide four images at flexible intervals once installed at the Nevada National Security Site.

To image hydrodynamic experiments, FXR first creates an initial electron beam and channels it into an accelerator. (See S&TR, May 1997, Better Flash Radiography Using the FXR.) Like other linear induction accelerator models, its accelerator is a meters-long shaft encircled by ring-shaped compartments containing hunks of magnetic material. As the electron beam proceeds through the accelerator, the electrons are steered by electromagnets and sped up by precisely timed electric field fluctuations. FXR’s downstream transport section then narrows the electron beam onto a thin target of dense metal, usually tantalum. Upon impact, electrons passing near the target’s atomic nuclei are deflected, and their resulting kinetic energy loss is converted via emission of a continuous spectrum of high-energy light known as “Bremsstrahlung,” which is perceived by a gamma-ray camera to image the experiment.

A simplified schematic illustrates how a linear induction accelerator creates diagnostic x rays. The process unfolds from left to right: an energetic pulse supplied by the injector is compacted and accelerated through a series of induction cells before striking the tantalum target to produce x rays, which then interact with the sample and are imaged by a gamma-ray camera.

In 2017, Ellsworth’s accelerator team began work on the Bipolar Reset Experiment (BiRX, an homage to accelerator design pioneer Daniel Birx) seeking to support rapid-fire pulses. Within a year of obtaining funding and approval and amid the COVID-19 pandemic, they designed, built, and tested a prototype device by integrating it into Livermore’s FXR facility, the first time it was used with a live beam. “That test was a big deal,” says Nathaniel Pogue, technical lead for the BiRX accelerator cell design and Accelerator Physics group leader. “The setup worked exactly as we wanted.” 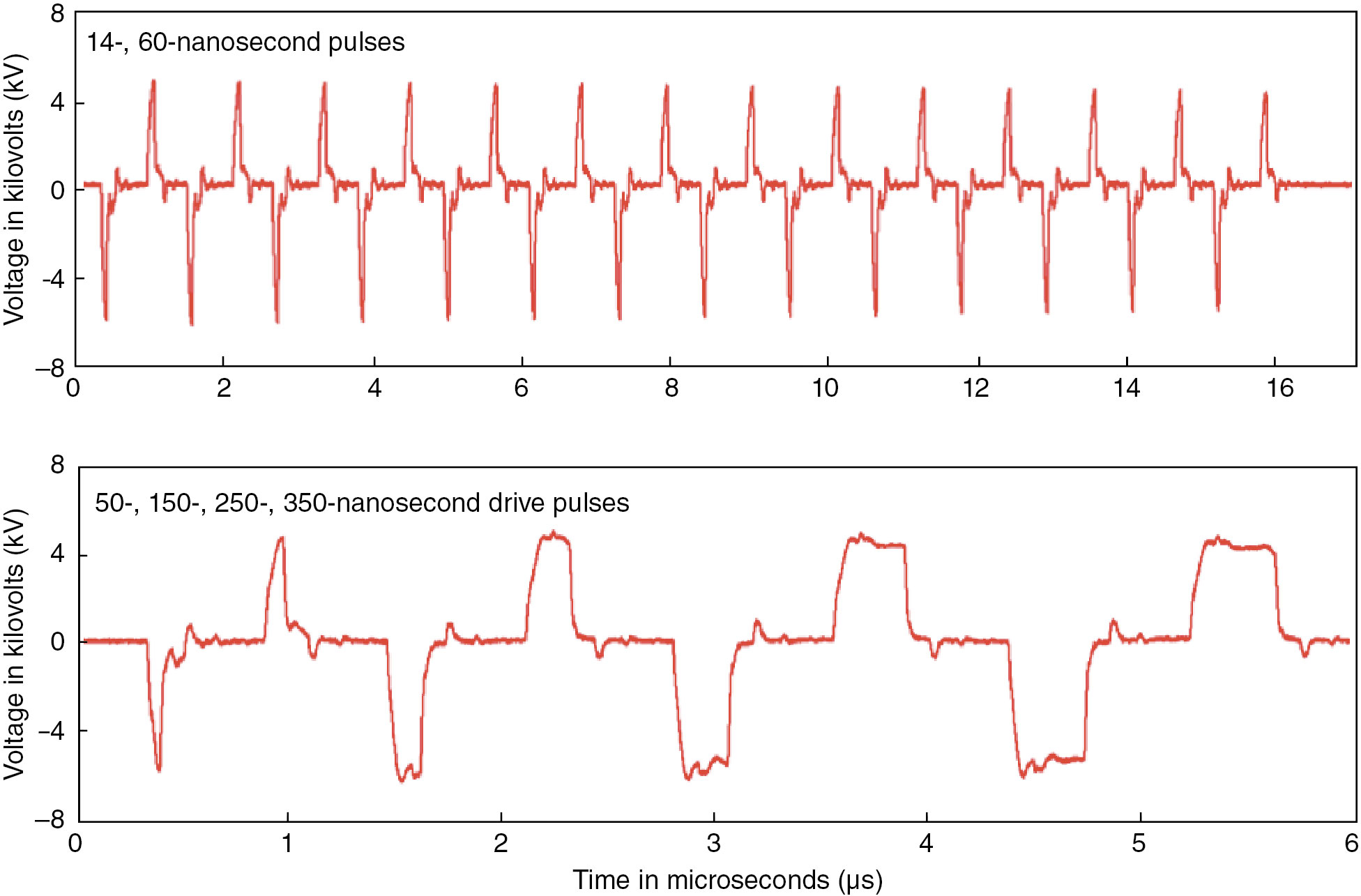 The diagnostic capabilities achieved with BiRX soar past those of its predecessors. Rather than divide a single microsecond beam pulse into multiple subintervals like other systems, the newly developed hardware generates and accelerates multiple beams in rapid succession. With BiRX, nanoseconds-long pulses can be executed at arbitrarily spaced intervals on the order of microseconds, revealing behavior on the smallest of timescales. Pogue is convinced the new system can outdo itself yet. He envisions a powerful movie machine serving as a second axis to Livermore’s FXR facility. The new instrument would supplement FXR’s existing two shots with another 20 shots taken from a different angle, creating a 3D image series—a leap after nearly 70 years of incremental improvement. “We’re not simply aiming to provide the next evolution of linear accelerator technology,” says Pogue. “This work is a complete revolution in radiography. Without that singular image taken by Muybridge, we’d never know whether horses left the ground. Unexpected behavior can’t be extrapolated; we just have to see it.”

The lightning-quick nature of flash radiography requires compression of large energies into small timescales. BiRX ultimately confirmed viability of a bipolar solid-state pulsed-power (BSSPP) system, the key innovation for realizing x-ray cinema. Energy is first accumulated as electrostatic potential within a large capacitor bank where it is stored as if in a battery. The built-up charge is released on cue almost instantaneously to generate and accelerate the electron beam. Because power is inversely proportional to elapsed time, discharging the stored energy in a matter of nanoseconds maximizes the peak power achieved.

Livermore’s multidisciplinary team reimagined pulsed power by introducing solid-state components. “Solid-state refers to the use of semiconductor devices such as the silicon carbide components found inside your home appliances,” explains Velas. Previous generations used a combination of water-filled pipes and spark gaps to provide single, fixed-duration pulses. Employing millions of solid-state components affixed to printed circuit boards provides researchers unprecedented experimental customization. In addition to the number, duration, and rate of pulses, the amplitude and shape of each pulse in a sequence can be altered as well.

The notion of using solid-state materials to power accelerators was hypothesized decades ago, but, until recently, schematics were more theoretical than realistic. “Innovation in the electric vehicle market paired with federal investment in semiconductor technology has given us high-quality, readily available components,” says Velas. “I’m fascinated that linking loads of tiny semiconductor chips together in the right way can generate gigawatts of power. Millimeter-size differences on a circuit board can make or break the entire system.”

The other revolutionary principle validated by BiRX was its eponymous bipolar reset functionality. Electron beams conceived at high voltage experience high initial velocity. Rather than endlessly generate ever-higher voltages, however, the beam is further accelerated using magnetic induction. Upon entering the accelerator portion of the system, the electron beam passes through rings of magnetic cores. These fine-tuned composites of ferromagnetic material are electrically charged to generate alternating polarity electric fields along the length of the accelerator. Exploiting the electromagnetic tenet of “like repels like,” the propensity for negatively charged electrons to accelerate away from a negative electric field ultimately propels the beam.

The magnetic cores, however, can withstand only so much use before becoming energetically saturated and shorting the system. Once too much voltage has been applied over time, the cells require cool-down time to neutralize and reset their storage capacity. This “passive reset” requirement has hindered prior experiments seeking a greater number of pulses. BiRX’s success ushered in “active reset” technology. Once a beam is fired using one polarity to obtain an x-ray image, a second pulse opposite in polarity shortly follows, releasing the magnetic cores’ accumulated internal energy.

Pogue’s team has so far designed an injector that supports bipolar capabilities, but Livermore’s FXR facility is still limited to passive reset overall. “Marrying active reset to the existing pulsed-power system is challenging,” admits Velas, who leads design of a bipolar pulsed-power source. Obtaining a bipolar active reset system will require a separate machine with purpose-built components, including new magnetic cells and a more resilient target. Pogue lauds the achievement thus far. “We started with arguably the most difficult part,” he says. “Now that we’ve proven the pulsed-power system performs just as we hoped, the remaining parts of the system should be less complicated to devise and construct.” 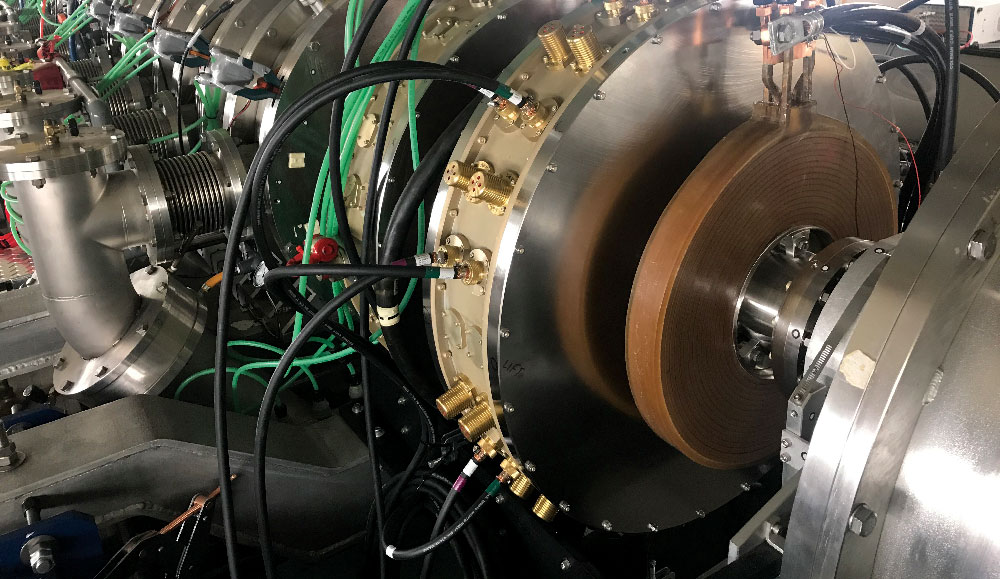 Active reset cells, seen here installed at Livermore’s Flash X-Ray Facility, are key enabling components for rapid-fire x-ray capabilities. The cells take the shape of large, metal cylinders at the injector side of the accelerator (foreground).

Pogue and Velas attribute their success to working with a diverse, fast-paced team. “The agility and multidisciplinary talents of our group prove we have exactly the people we need working on our national security mission,” says Velas. “We’re likely to uncover problems and solve them before other projects even know they’re there.”