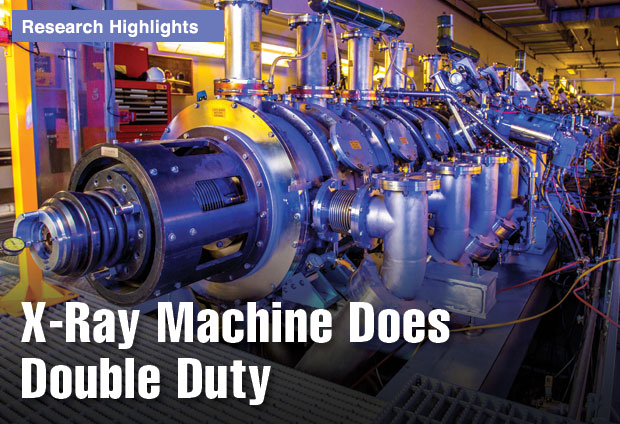 The Flash X Ray (FXR) is an important diagnostic tool for hydrodynamic testing that enables scientists to capture images of an exploding device. (Photo by George Kitrinos.)

Imagine an x-ray machine billions of times more powerful   than those used by dentists, a machine whose x rays can penetrate more than 30 centimeters of steel and provide a stop-motion photo of an explosion. This extreme radiography is the core capability of Lawrence Livermore’s Flash X Ray (FXR), a decades-old linear induction accelerator that continues to assist the Laboratory in fulfilling its national security mission.

First developed at Livermore in the mid-20th century, induction linear accelerators are used in applications requiring extremely high currents of charged particles in a single short pulse. With FXR, scientists can see into the heart of test objects at an exact moment after detonation, revealing data about implosion symmetry. In the past, this sophisticated x-ray machine could only capture one image per experiment. However, a recent upgrade to the system now allows two images to be taken only microseconds apart. These images will provide new understanding into the implosion process of nuclear weapons. FXR’s new double-pulse capability, which has been a long time coming, proves the adage that good things are worth the wait.

Only nonnuclear hydrodynamic experiments are carried out at CFF. These tests involve an inert (nonfissile) material wrapped in a high explosive. When the high explosive is detonated, the resulting explosive compression deforms the inert material making it denser and even melting it. Radiographs taken with FXR can capture an entire test device or concentrate on a small area. Scientists can “view” details of the experiment and gain insight into the process from detonator initiation through the implosion phase.

The Contained Firing Facility at the Laboratory’s Site 300 is home to unique experimental capabilities such as FXR, which helps weapons scientists assess the operation of nuclear weapons.

Data gathered from experiments help weapons scientists verify and normalize computer models used for stockpile stewardship. Livermore’s Scott McAllister, associate program director for hydrodynamic and subcritical experiments, explains, “We combine such models with data from current experiments and past nuclear tests to verify we have confidence that our nuclear stockpile will perform. Codes are improving all the time, so diagnostic tools such as FXR must also evolve to maintain parity to the codes. We are always developing new ways to retrieve more data from each experiment. By obtaining multiple images from a single experiment, we can better test our models.”

During an FXR double-pulse experiment, pulses of electrons, separated by a few microseconds, are created in the machine’s injector and accelerated through electrically independent modules. (Blue cells indicate modules used for the first pulse, while orange cells indicate modules used for the second pulse.) When the enhanced electron beams hit the tantalum target, the electrons lose energy, emitting powerful x rays. The collimator narrows and focuses the x-ray beams onto the exploding device. Photons that pass through the device are recorded by a gamma-ray camera, creating a high-resolution x-ray image.

FXR’s newest upgrade essentially divides the machine in half. For each shot, 5 of the 10 injector cells work together to fire a 1.5-megavolt pulse that enters the accelerator tube containing 44 electrically independent modules. Twenty-two modules are used for each of the two pulses. Each module fires sequentially, adding energy and acceleration to the negatively charged particles, propelling them forward until the 9-megavolt beam is traveling close to the speed of light. The electron beam then enters a drift section where magnets “steer” the beam toward the tantalum target.

As the electrons pass through the target, the electric field created by the stationary charged particles of the heavy tantalum nuclei causes the electrons to decelerate and radiate x-ray photons. These photons enter the exploding test device. Most of the photons are absorbed—how many being a function of the density of the material they encounter. The photons that reach the camera create the x-ray image. The two electron beams are spaced 1.5 to 4 microseconds apart, providing two closely spaced images of the exploding device.

Engineer Jennifer Ellsworth and her team reconfigured FXR to create this double-pulse capability, while retaining the machine’s single-pulse functionality. The biggest challenge, Ellsworth notes, was integrating the subsystems and components. “Once the upgrades were in place, we had to ensure everything worked together and the system as a whole was reliable,” she says. As an added challenge, since the facility was in use during regular, day-shift hours, Ellsworth and her team had to conduct all their upgrades during the swing shift.

Images captured from FXR’s first “dynamic” experiment show changes to a detonator device during the first and second pulses, which occurred 7.8 and 10.8 microsconds after detonation, respectively.

The recent upgrades to FXR increase the utility of the decades-old machine, enhancing its contributions to the Laboratory’s national security mission. This valuable capability helps weapons scientist to ensure the safety, security, and effectiveness of the U.S. nuclear stockpile without nuclear testing. Toward this end, FXR is one of the resources that Livermore scientists have turned to in their work on life-extension programs for the W80-4 and W78-1 nuclear warhead systems. Life-extension programs focus on the challenges associated with aging materials, older designs, and aged parts for weapons that were designed with a 20-year service life.

Scientists are invigorated by FXR’s double-pulse capability as it demonstrates what is possible as technology advances. Researchers are using an end-to-end simulation capability for the machine and other simulation tools to improve machine performance for both single- and double-pulse operations. “Eventually, we want the machine to be able to generate two closely spaced full-energy pulses,” says Ellsworth. “To make that function a reality is a big engineering challenge. We would have to reconfigure FXR such that the whole machine can be fired twice. This reconfiguration would allow more x rays to be generated, which would provide a stronger signal and higher penetrating power. Such a capability would allow us to use the double-pulse capability on a wider range of experiments.”

Ultimately, notes McAllister, the goal is to have a machine that can take x-ray movies. Similar to the processes FXR is designed to capture, the machine itself is dynamic and evolving. Each evolution takes FXR another step forward in experimental capability. Together with validated computer models and historic nuclear test data, FXR experiments provide scientists at the national laboratories with the confidence to say, “This weapon will work.”