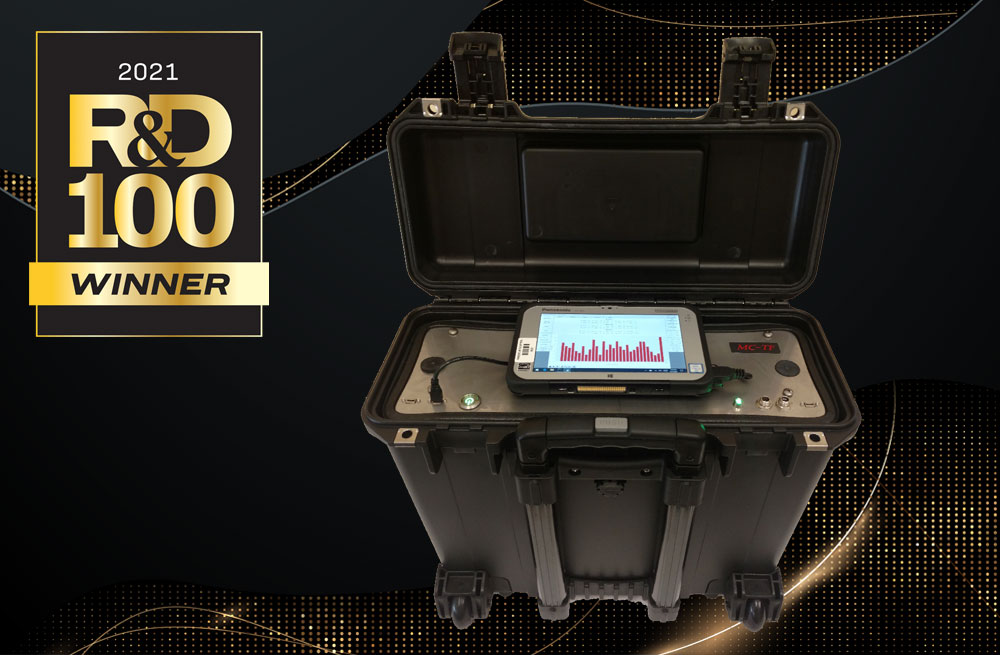 A 2021 R&D 100 Award–winning detector technology gives first responders a faster, more accurate tool for determining whether an unknown source of radiation contains core materials used in nuclear weapons. The field-deployable Multiplicity Counter for Thermal and Fast Neutrons (MC-TF) rapidly detects, in real time and with high confidence, both fast (high-energy) and thermal (low-energy) neutrons emitted by special nuclear materials (SNM), such as plutonium and uranium. These data are used to determine features of interest, including the material’s type, shape, and size—important data that emergency personnel and decision makers need to develop a response strategy.

Better Detection When It Counts 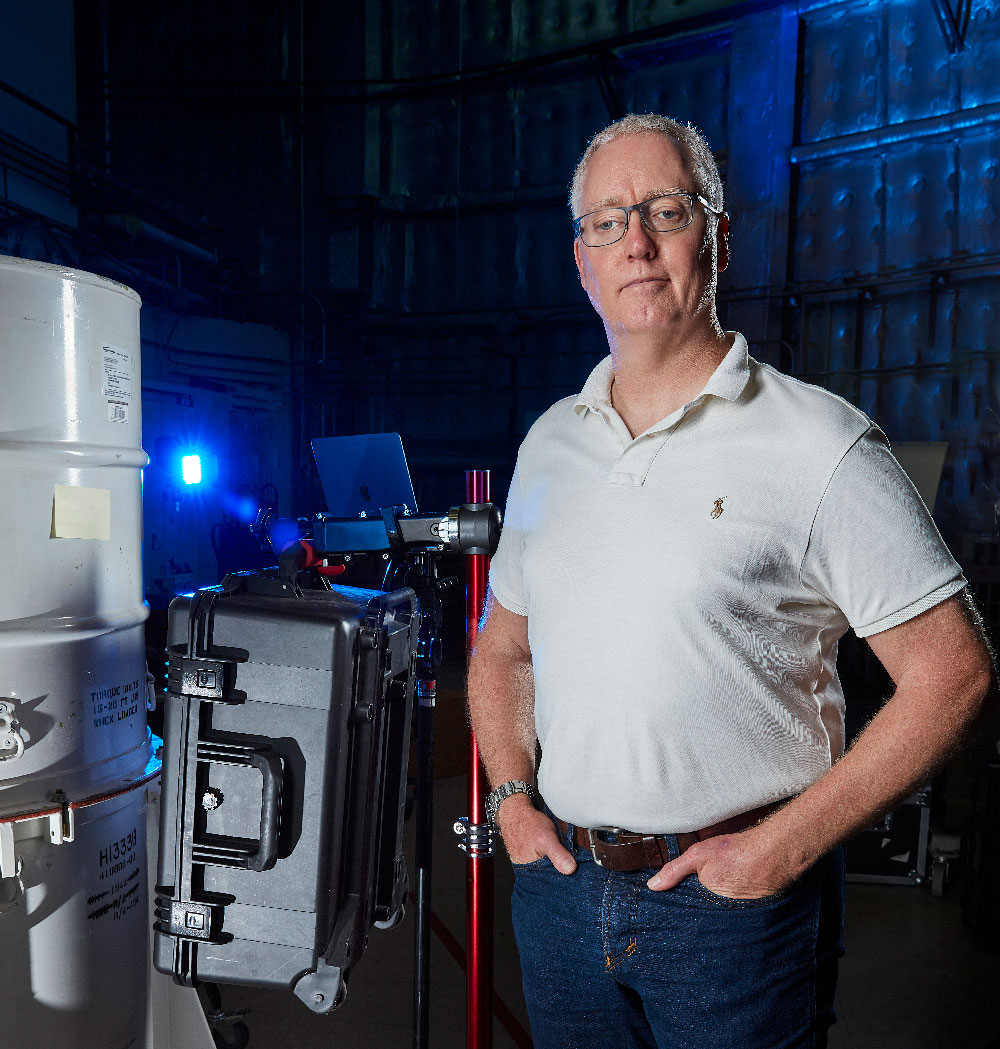 Livermore physicist Sean Walston is a co-developer for MC-TF.

Although other materials emit radiation, SNM is unique in its ability to sustain a fission chain reaction—a self-propagating process in which neutrons emitted from a fission event collide with other nuclei, which in turn fission and emit more neutrons. The process occurs repeatedly, perpetuating the fission chains.

Livermore physicist Sean Walston, one of the inventors for MC-15 and MC-TF, explains that the neutrons resulting from a fission chain are closely spaced in time and come in bursts separated by gaps, whereas neutrons emitted from non-SNM sources stream out in a steady flow. MC-TF uses this temporal correlation to distinguish between neutrons emitted from the different sources. The MC-TF system records the “timestamp” of each neutron detection event to determine the total number of neutrons produced per fission-chain burst. The data can then be used to estimate the chain length and the rate at which the chains occur to extract features of interest and quantify the magnitude of danger. The pattern of neutron arrival times can reveal the size and shape of the nuclear material as well as the material’s composition.

MC-TF offers several advantages over its award-winning predecessor, MC-15. Most notably, it can detect fast neutrons in addition to thermal neutrons. Walston notes, “MC-TF’s ability to detect fast neutrons from a fission chain provides the opportunity to witness the chain’s evolution, which is a powerful capability for nuclear diagnostics.” The detection medium has also been improved. MC-15 utilizes tubes filled with helium-3 to effectively detect thermal neutrons, leading to an inherently slow response time to fission-chain events. This time lag is due to the detector’s need to wait for the fast neutrons from the fission chain to thermalize—that is, to scatter multiple times until they lose enough energy to become detectable. Another drawback with MC-15 is the gas itself, which is becoming increasingly rare and difficult to obtain. Alternatively, MC-TF detects thermal neutrons with scintillators made from CLYC (cerium-doped cesium lithium yttrium chloride) crystals. For fast neutron detection, the team incorporated stilbene scintillators, enabling MC-TF to detect both slow, thermal neutrons, and fast neutrons in one device.

The MC-TF system contains 90 individual radiation detectors that are evenly split between stilbene and CLYC scintillators. Each detector includes a stilbene or CLYC crystal coupled to a solid silicon photomultiplier array and associated electronics. These improvements allow MC-TF to directly digitize incoming pulses with a timing accuracy of 12 nanoseconds compared to MC-15, which records data in blocks of 100 nanoseconds. The detector is also more portable and adjustable. MC-TF is about the size of a small suitcase and is modular in construction, allowing it to be scaled up or down, as needed.

The Laboratory developed the algorithm that performs MC-TF’s data analysis and detailed source characterization. Conceived in 2013 by Walston, Jim Candy, Neal Snyderman, Dave Chambers, and Hema Chandrasekaran, the On-line Statistical Analysis of Neutron Time Correlation (OSANTC) algorithm estimates the mass and multiplication of SNM given relatively few neutrons. The technique can be used for fission chains initiated by either a single neutron or by the spontaneous fission of another isotope. In neutron detectors, OSANTC interprets temporal multiplicity information to provide insights about the material being analyzed. The Livermore-developed algorithm is self-calibrating, quantifies uncertainties, and reduces measurement times by as much as a factor of 100.

MC-TF is one of only two instances where the algorithm has been run on the detector itself. OSANTC can operate online, and having it on the detector eliminates the need for multiplicity data to be transmitted to remote personnel for batch analysis. OSANTC also directly estimates MC-TF’s detection efficiency from the time-tagged neutron data, rather than relying on human analyses or data gathered from additional “on the scene” neutron detection equipment. Furthermore, OSANTC provides first responders and decision makers with confidence intervals on its estimates of SNM mass and multiplication—a first for this type of detector technology.

The new capabilities provided by MC-TF offer first responders a more advanced technology for quickly assessing in real time and with high confidence the threat level posed by a suspected nuclear weapon. Recognizing the importance of ever-more reliable neutron data, the team is hard at work on further enhancements that will include detection of neutron-capture gamma rays, which can be used as surrogates for thermal neutrons. With MC-TF’s ability to detect thermal neutrons, fast neutrons, and gamma rays, first responders facing a potential nuclear threat will have the information they need much more quickly, when it counts.