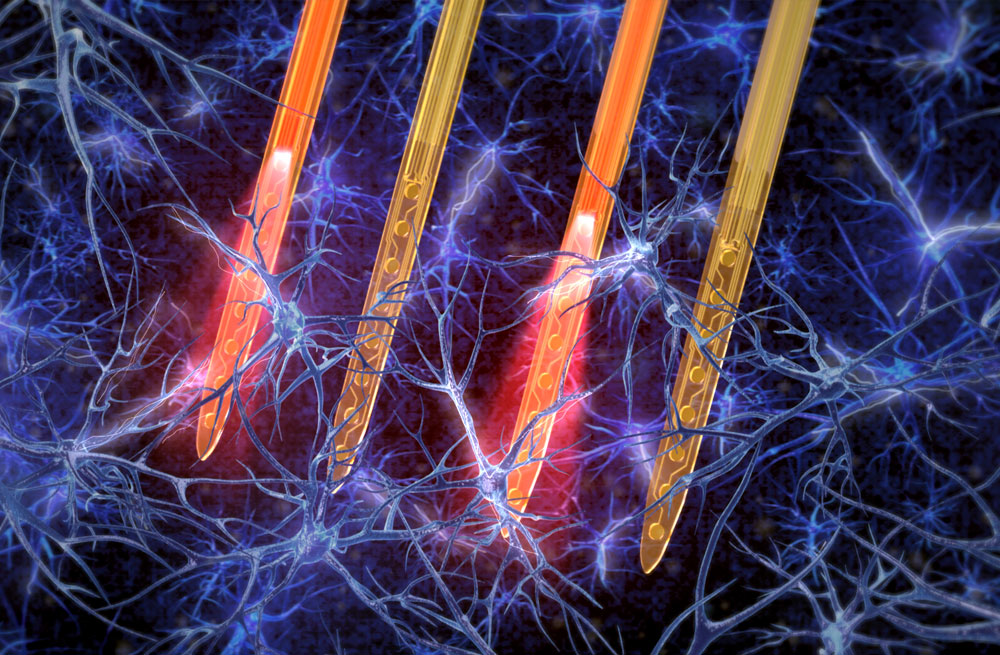 Taking Implantable Microsystems to the Next Level

In 2021, using a flexible thin-film microelectrode array developed by scientists and engineers at Lawrence Livermore’s Center for Bioengineering, medical researchers at the University of California at San Francisco, observed a never-before-seen view of how the brain’s signals move in a human subject. The high-density grid layout, small size, and ability to conform to the brain’s surface offered by the Livermore-developed technology enabled the team to see, for the first time, bi-directional brainwaves traveling across the hippocampi of patients.

Artificial retina technology, developed in the 2000s at Livermore with partners from other national laboratories, universities, and the private sector, served as a very early precursor to making this discovery possible. Components of this earlier project—a patented thin-film array containing electrodes, an implantable hermetically sealed package, and a surgical tool for placing the array—restored basic vision via a miniature video camera embedded in eyeglasses and an electronic imaging system implanted within the eye. This invention was the first Food and Drug Administration–approved retinal prosthesis for individuals with end-stage retinitis pigmentosa and won a 2009 R&D 100 Award in addition to innovation accolades from Time and Popular Science in 2013. Expanding on this foundational work, recent versions of the Livermore microelectrode array have pushed the limits of existing technology. These examples—the latest versions of the device type involved in the 2021 findings—are poised to help collaborating researchers make more breakthrough discoveries about the brain’s complexities. 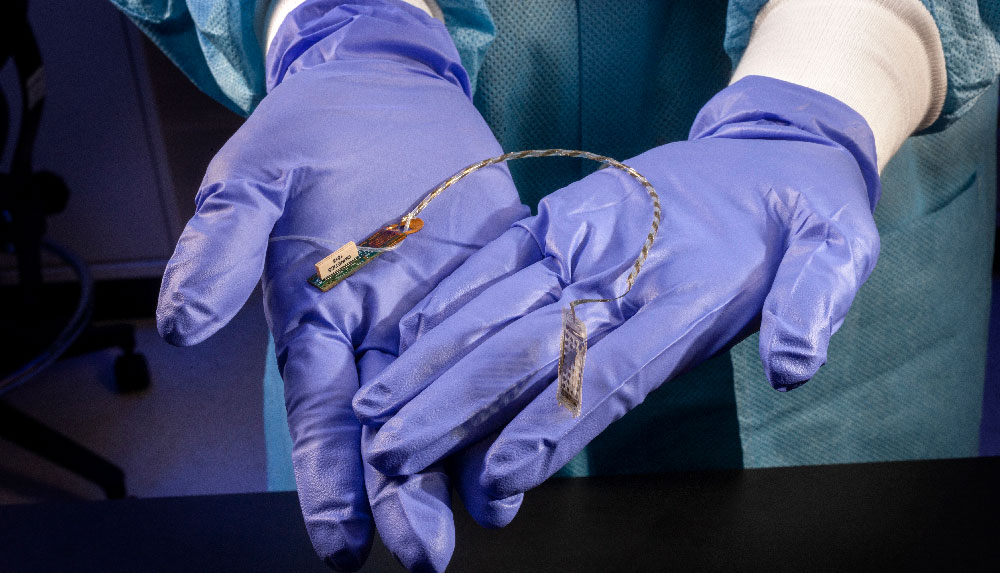 Added flexibility of the latest Livermore-developed thin-film arrays helps the electrode better conform to the brain’s cortex, establishing more intimate contact between the brain and the array so neural activity is more readily transmitted.

Using Light Instead of Electrons

Livermore’s first optical implantable devices are built on a novel platform called POEMS, for polymeric opto-electro-mechanical systems. POEMS integrates optical waveguiding capabilities with the previously patented flexible electrode platform technology—a Laboratory first. Using light to activate neurons instead of electrons, these devices could one day be used for high-resolution, minimally invasive therapeutics. “Researchers need better spatial precision and real-time monitoring over long periods of time to study the brain,” says Razi Haque, Implantable Microsystems group leader. “With the Laboratory’s additive manufacturing and microfabrication expertise and resources, we identified a combination of materials and a design configuration to develop a neural interface that combines optical and electrical capabilities into a single device.” POEMS’ waveguides can be used for optical delivery or sensing and imaging. The National Institute on Deafness and Other Communication Disorders (NIDCD), part of the National Institutes of Health, and the Laboratory Directed Research and Development (LDRD) Program funded the team’s work.

More than one million severely to profoundly deaf individuals have received a cochlear implant (CI) to restore some of their hearing. However, CI performance varies due to poor frequency discrimination and limited frequency range, making the devices less effective in noisy environments. An advanced CI, manufactured using techniques developed in the Biomedical Foundry, could help overcome these challenges and bring down the significant cost of commercial CIs.

Recent research indicates that the cochlea may be stimulated with light as well as electrical signals, possibly sending the right signal more precisely to the cochlea. This approach would provide greater control across the spectrum of sound frequencies compared to adding acoustic channels. “An optical cochlear implant that transmits light into the cochlea and produces a high-definition hearing response is next-generation technology,” says Haque. “While we don’t know if this approach will perform better than existing devices, we are working with collaborators who can conduct the studies necessary to determine the potential of this new technology.”

Researchers in Haque’s group are also developing an open-source CI design, with support from NIDCD, consisting of a 32-electrode array, the required custom electronics in a behind-the-ear package that controls and powers the implant, and accompanying software. In consultation with a scientific advisory panel, the group will support the hearing research community and related commercial sector in using the specifications to develop standardized hardware and algorithms for stimulation coding to improve the overall design and function of the device. The team is also working to make better, more affordable CIs by replacing the manual production process for traditional CIs with microlithography.

Research staff engineer Travis Massey aims to further extend the Implantable Microsystem group’s efforts by increasing an array’s electrode channel count and the number of electrodes within a given brain volume or area. Scaling channel count and density requires developing a new nanofabrication process leveraging Livermore’s electron-beam lithography capability. Massey says, “We must also address how we handle, amplify, and digitize 1,000 or even 10,000 signals. Part of that challenge is physically getting the signals to the electronics. Either we need a compact thousand- or ten-thousand-channel connector, which doesn’t yet exist, or we integrate a microchip directly into the probe.”

Another consequence of increasing spatial density to accommodate the increased channel count is crosstalk between the channels that must be managed through careful design and modeling. Electromagnetic interference (EMI) from the noisy operating room environment and sterilization process present a related challenge that Massey has mitigated by developing integrated electromagnetic shielding and a compatible, conductive fabric wrap, or Faraday cage. Massey’s solution was presented at the 2022 Neuroelectrical Interfaces Gordon Research Seminar. Both EMI and crosstalk are also alleviated by digitizing the signals as closely to the brain as possible.

Rigorous testing ensures electrode arrays function properly before they are implanted in animals or in humans. Electrochemically testing 1,000 to 10,000 channels can take days or weeks, but Massey has developed an automated process. “We reduced the time to test a 512-channel array from days to hours,” says Massey. “By parallelizing this automated testing, which is still a work in progress, we will be able to further reduce the time by a factor of 1,000. What would have once taken a month, even multiplexed, will someday take less than an hour per device.”

Detecting and quantifying chemical neurotransmitters in the brain’s complex signaling system requires modifying the Livermore microelectrode array to measure chemical signals. (See S&TR, November 2016, Peering into the Brain with Chemical Biosensors.) Adding chemical sensors onto the electrodes enables sensing modalities that can provide neuroscientists and other researchers with insight into brain functionality beyond electrophysical signals alone.

Research staff engineer Allison Yorita is developing microfabrication processes with a team of Livermore researchers she led under a separate LDRD-funded effort. The earlier work integrated carbon nanotubes onto the existing Livermore flexible microelectrode array as an electrode material to enable detection of a wider variety of neurotransmitters. “The polyimide substrate would degrade at the 700 ˚C temperatures required to grow carbon nanotubes, so we determined how to grow them before any polyimide was introduced into the fabrication process,” says Yorita. “In our ‘bottom up’ approach, we grow carbon nanotubes on a silicon carrier wafer first. Then we deposit, pattern, and etch the remaining materials that comprise our polymer probes.”

A 512-channel array (left) electrically records speech activity from the surface of the brain to decode the fundamental building blocks of spoken language. Time to test this array has been reduced from days to hours through the team’s automated process. Carbon nanotube electrodes (right) are incorporated into prototype devices (right) to enable detection of a wider variety of neurotransmitters.

Yorita sees enormous potential as applications for the team’s technology expand. “I’m interested in observing other parts of the body, such as the spinal cord or interstitial fluid, to monitor what’s happening chemically, in real time, for biodefense applications. Detecting minute chemical changes in the body now may indicate potentially harmful physiological effects that would present later and point to earlier deployment of possible treatments and therapeutics for improved prognosis.”

The Laboratory’s unique capabilities and infrastructure combined with resources at the Biomedical Foundry enable the design and fabrication of medical-grade devices and circuits at microscale with fine-grained control all within a Quality Management System (QMS). The Foundry’s next step is accreditation in alignment with International Organization for Standardization 13485 for medical device prototyping. “We’re one of the few institutions in the nation with a QMS for microfabricated medical devices, and we are working hard towards accreditation. We’re committed to maintaining this level of excellence and developing the foundry’s capabilities even further,” says Haque.

“With growing interest from the scientific community in how these technologies can best be leveraged to better understand the brain and human body, our team stands at an exciting time in implantables research,” says Yorita. Adds Massey, “Core Laboratory technological competencies are opening therapeutic avenues that could be life altering for millions of people.”