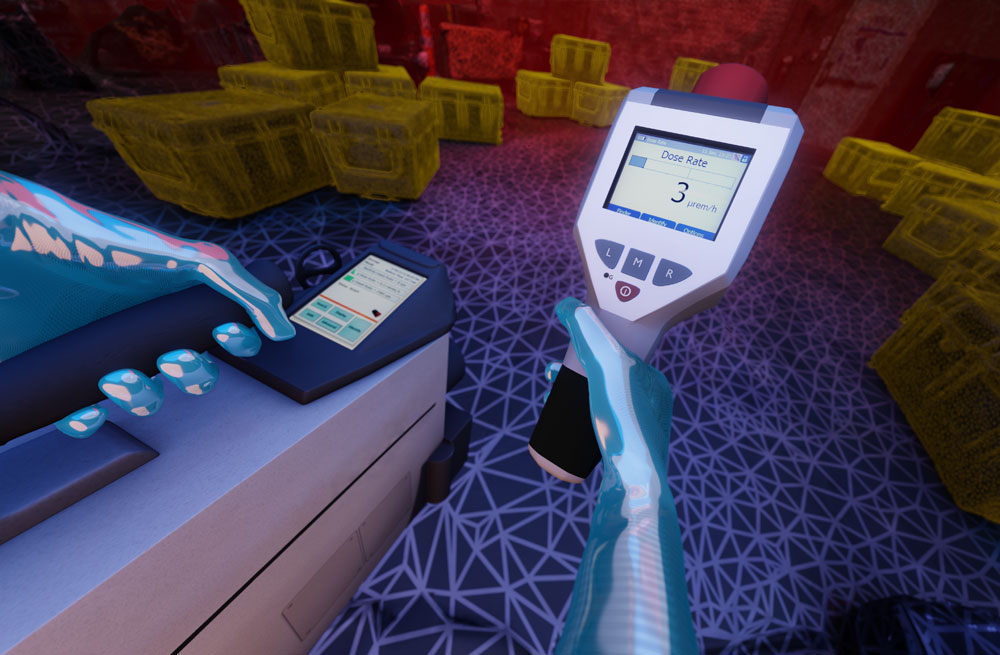 Nuclear emergency responders called to a scene involving an unknown radiological device must quickly locate, identify, and defeat the threat using specialized detectors and equipment. To prepare for real-life nuclear incidents and improve operational decision-making, nuclear emergency responders require realistic exercises. Unfortunately, training with nuclear material is logistically challenging, expensive, and can only involve sources that emit low levels of radiation and are carefully prepared and actively monitored to ensure the safety of the participants. The ideal solution to this problem is a new training capability that can simulate high radiation dose events without causing harm to trainees.

To address the need for realistic high-fidelity training, a multidisciplinary team at Lawrence Livermore has worked to establish the new gold standard simulator called TARANTULA (Tactical Augmented Reality Applications for Nuclear Emergency Support Team (NEST) Training using Livermore Analytics). TARANTULA is a scientifically accurate, fully functional, field-deployable simulator that provides an immersive training experience unlike any other. At the technology’s core is its ability to calculate and display real-time gamma and neutron data from virtual radiological sources on simulated handheld detectors for trainees and instructors to use for developing skills and practicing response tactics.

Recognizing the importance of a cost-effective, feature-rich, flexible training capability for the nuclear emergency response community, the Department of Energy (DOE) Office of Nuclear Incident Response has funded a small team of Livermore developers, scientists, and engineers to develop the TARANTULA project since 2019. This new capability is intended to support NEST, which addresses DOE’s and the National Nuclear Security Administration’s (NNSA’s) radiological and nuclear response functions. 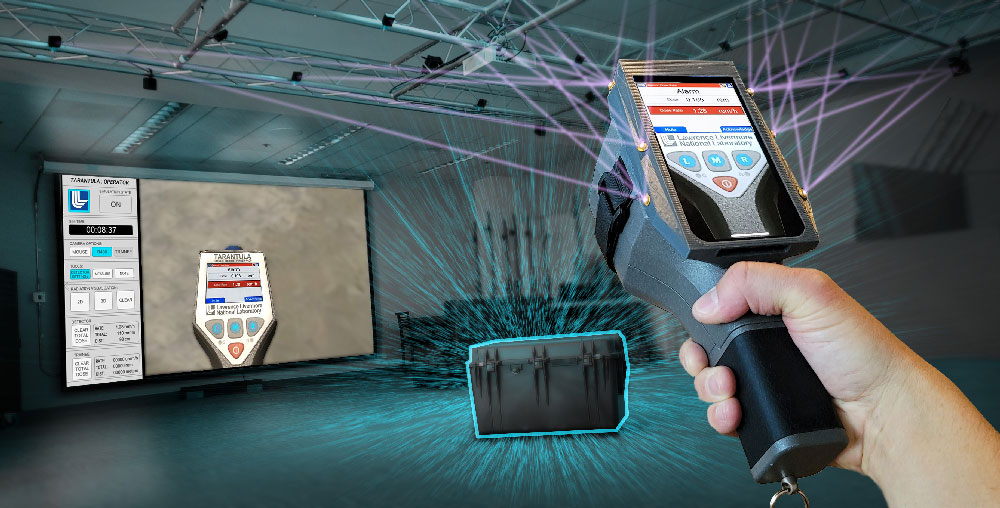 This visualization shows a setup of the TARANTULA (Tactical Augmented Reality Applications for NEST (Nuclear Emergency Support Team) Training using Livermore Analytics) augmented reality (AR) platform inside a large warehouse. An array of cameras above the training area tracks a simulated detector using infrared light sources (visually represented by the path of purple lights streaming from the cameras to the markers around the edge of the detector). The simulated item of primary concern (black case) is also marked and tracked by the cameras. The screen in the background provides instructors with a real-time view of everything the trainee sees during the training exercise. (Images by Ryan Chen.)

The project team created the proxy detectors for training by 3D printing handheld enclosures that resemble the look and feel of a radionuclide identification device. A smartphone, which runs a custom application that displays simulated detector response data for trainees, is embedded into the front of the enclosure to emulate an actual detector’s user interface. During a training exercise, simulated radiological data is calculated in real time by the system by using optical tracking data of the virtual radiological source, people, and simulated detectors. Livermore signal processing engineer Karl Nelson established the method for producing this detector-specific data to simulate the behaviors and functions of detectors in the field. In the past, the software that performed real-time gamma calculations was single-threaded, meaning the program was not designed to efficiently provide data to multiple entities, for example, people and detectors, in a real-time application. To address TARANTULA’s needs, Nelson developed a new multi-threaded gamma calculation service to replace the older training standard. This capability allows the technology to support dose tracking and simulated detector response for multiple individuals and detectors simultaneously. 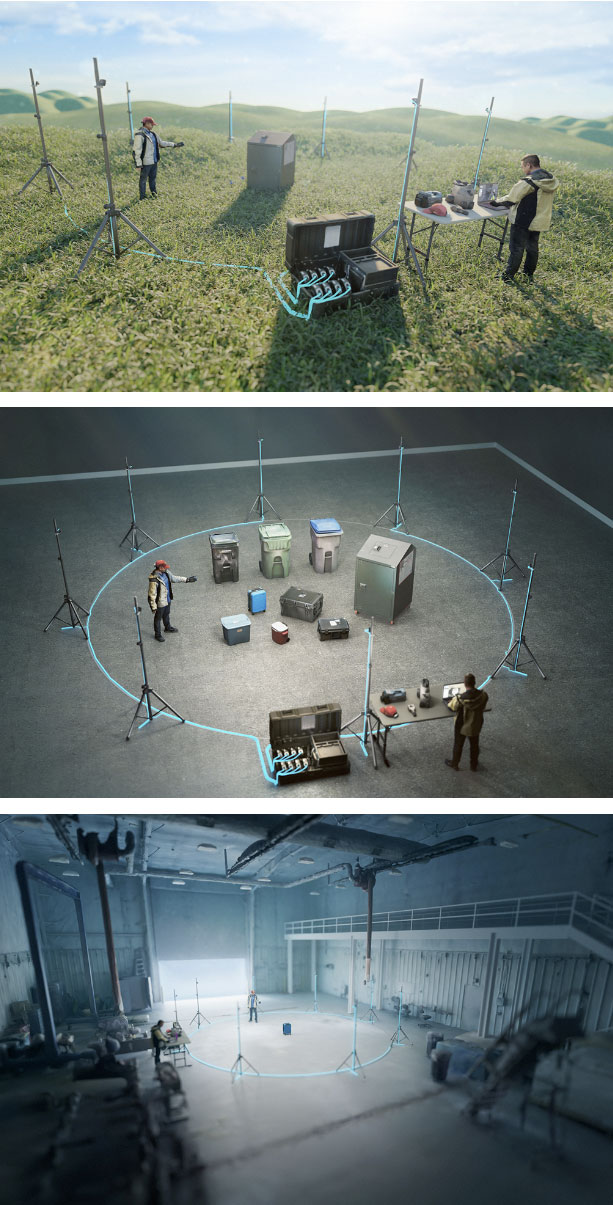 Visualizations show the TARANTULA training set up in a remote field (top), office (middle), and warehouse (bottom). Cameras in a circle formation optically track everything inside a space (boundaries indicated in blue) where a trainee holds a detector and walks around the object(s) of interest to locate and determine the nature of the nuclear threat(s). (Images by Ryan Chen.)

Most radiological training tools are limited to identifying gamma radiation alone, but TARANTULA is unique in that it can also support simulated neutron radiation. This capability is essential to support a variety of training scenarios; while some source types may only emit gamma or neutron radiation, others emit both. In addition, understanding how an environment’s intervening layers—such as walls or flooring made of wood, brick, concrete, iron, lead, water, or other materials—can affect the way radiation particles move and interact is an important feature. For example, gamma radiation is primarily attenuated and scattered, while neutrons tend to move around as they diffuse, spread, and bounce around a space. Livermore nuclear engineer Bonnie Canion, who developed the technology’s neutron simulation component, says, “Interpreting the neutron signature from a source object is key to assessing the threat, particularly for those involving special nuclear material. The neutrons provide information about whether an item is a criticality concern or if it is suspected to have high explosives in conjunction with nuclear material.”

TARANTULA can calculate real-time gamma and neutron exposure rates based on a room’s dimensions, intervening layers, and even the orientation of the detector relative to the radiological material. To perform these calculations, optical tracking cameras are stationed above the training area to track the location and distance of the simulated radiation source from the handheld detector, the trainees, intervening layers, and any other equipment in the training environment. These cameras use submillimeter-accurate optical tracking technology to capture 120 to 240 frames per second—the same motion capture technology used in video games, television shows, and movies. Chen says, “The simulation is so realistic because we can perform context-specific calculations in real time and account for variations and changes in the real world. As the scenario evolves, we can continue to simulate the detector’s response in real time, even if the source’s location is adjusted or intervening layers are added or removed.”

The TARANTULA program is completely customizable and can support both single player and multiplayer–multidetector training. The technology’s flexible and interactive design will provide the nuclear emergency response community with an unlimited number of training scenarios for years to come.

Training can be conducted in a large room, a warehouse, or outside in a remote field. Along with simulated detectors, TARANTULA provides an AR experience for instructors to watch on a tablet device where real-time information such as dose rate and total accumulated dose of trainees are superimposed on the real-world view of the participants. “The system records individual trainee performance and produces video and data files for after-action reports and post-training analysis,” says Jackson. “This feature provides trainees with the opportunity to replay their simulations, receive feedback from their trainer, and improve their nuclear response skills.” The emphasis on providing enhanced real-time situational awareness during training exercises, as well as additional material for classroom discussions, is all designed to give students the best training experience possible. What TARANTULA provides is a significant leap forward from current training methods that rely on verbal announcements read from pre-calculated datasheets on a clipboard.

During a TARANTULA training exercise, a tablet application provides instructors with an AR experience of the live simulation. The black case contains the simulated radiological source, and the superimposed circles represent a handheld detector’s reported radiation dose rates as the trainee moves around the training area. (Image by Ryan Chen.)

More advanced AR tools are in development, as are VR applications enabling individuals or a team of responders to train in their offices, classrooms, or homes. Since the COVID-19 lockdown in early 2020, and a shift to remote work practices, Chen’s team has started developing a custom application to support high-quality training through teleconferencing. In these tabletop exercises, trainees observe virtual responders in a lifelike simulated environment as they discuss tactics, make choices, and study the outcomes and consequences of their decisions.

Laboratory researchers continue to expand on the technology’s capabilities, working with DOE and NNSA partners to help inform and prepare the nation’s emergency responders to recognize, understand, and appropriately address nuclear and radiological threats. In support of these efforts and to encourage hands-on training opportunities among all sponsors, stakeholders, and potential end users, the team plans to build new TARANTULA-supported training facilities at Lawrence Livermore and other federal sites. “The community has desired a solution such as TARANTULA for a long time, and we aim to deliver on this need,” says Chen.