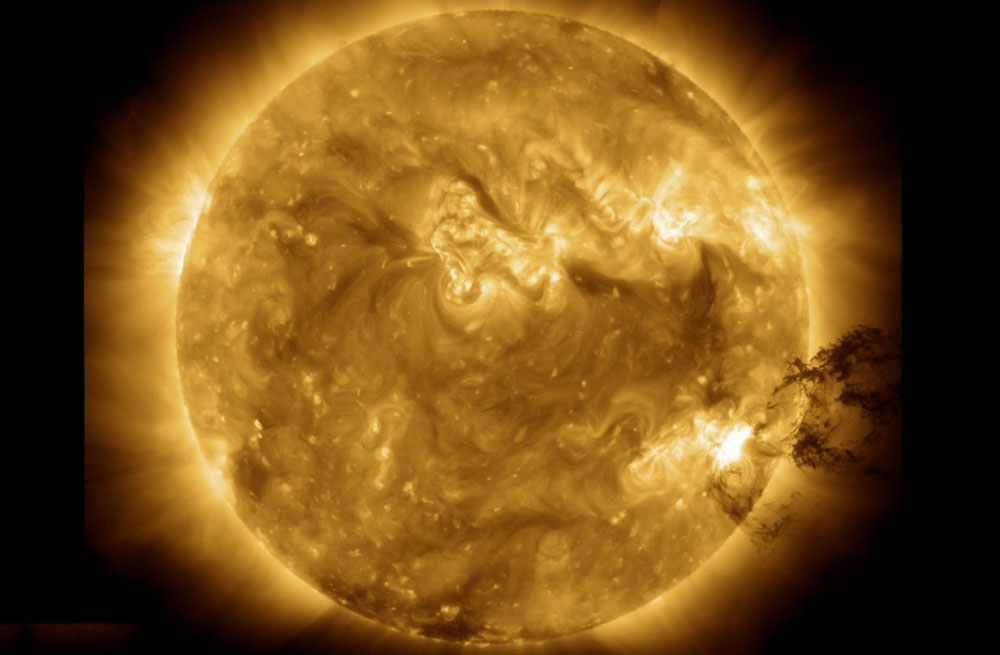 Collaborative research and development focused on the extreme ultraviolet (EUV) end of the spectrum has resulted in state-of-the-art, multilayer reflective optics used for space exploration, manufacturing microchips, and more.

Located on the high-energy end of the electromagnetic spectrum—just shy of x rays—EUV light claims the shortest wavelengths in the ultraviolet (UV) region: approximately 10 to 100 nanometers (nm). Emitted by the Sun and absorbed by the Earth’s atmosphere, EUV’s short wavelengths are created and utilized by many scientific and technical applications, including extreme ultraviolet lithography (EUVL), which etches nanometer-scale features onto computer chips, and for collecting images from space-based optical systems. Over the last few decades, the Laboratory has been at the forefront of developing multilayer optics and harnessing EUV’s capabilities to benefit many mission-critical applications.

The Laboratory’s initial entry into EUV multilayer-coating technologies focused on creating coatings for laser-system optics and for some of the earliest space-borne solar physics telescopes, more than 30 years ago. (See S&TR, December 1999, Multilayers Illuminate the Sun’s Secrets.) Laboratory physicist Regina Soufli, who has spent more than 20 years developing and characterizing EUV optics and advancing multilayer thin-film science, explains, “Livermore’s Nova laser was one of the earliest laser systems that produced EUV and soft x-ray radiation—with waves that measure a few nanometers in length and are ideal for studying biological samples and nano structures. But we were faced with the challenge of how to make images from these x rays.” Working with such short wavelengths is tricky: imaging must be performed in a vacuum environment and conventional refractive lenses will not work, because air and other materials absorb EUV. Reflective mirrors are needed to focus light, and yet, the EUV reflectivity of any single material at near-normal angles of incidence is nearly zero. To address this, scientists utilize multilayer interference coatings, which consist of alternating, thin-film layers with nanometer-scale thickness, of two or more materials, deposited onto an optical substrate. The constructive interference of EUV light bouncing between the layers results in high reflectance—a material’s effectiveness in reflecting radiant energy. These multilayers enable operation at near-normal angles of incidence, resulting in imaging geometries with high effective areas, low aberrations, and exquisite resolution, using optics of modest size.

Over time, the Laboratory and its collaborators have made significant accomplishments, applying their know-how to ever-more-challenging applications, including EUVL, which uses optical systems operating with light at 13.5 nm wavelengths to pattern microchips with the smallest achievable features. This technology was advanced at Livermore in collaboration with Lawrence Berkeley and Sandia national laboratories in a large Cooperative Research and Development Agreement (CRADA). The CRADA, initiated by Intel and funded by a consortium of semiconductor manufacturers, ran from 1997 to 2003 and garnered several R&D 100 awards. (See S&TR, November 1999, Extreme Ultraviolet Lithography Imaging the Future; October 2002, Stepping Up to Extreme Lithography; and October 2003, In the Chips for the Coming Decade.) Due in part to the Laboratory’s foundational contributions on multilayer optics and related metrology—the scientific study and realization of measurement—EUVL is now widely employed in manufacturing the microchips that power smartphones, tablets, and other digital devices. Eric Panning, Intel engineering manager, says, “Lawrence Livermore National Laboratory was a pioneer in addressing one of the biggest challenges of EUV—developing high-reflectivity, multilayer surfaces while simultaneously meeting figure and roughness requirements. The Laboratory figured this out, which propelled the program forward. Our efforts continue to push the boundaries of what is possible in this area and our collaborations have proved extremely valuable over the decades, with results that have benefited the entire microchip manufacturing industry.”

As EUV-related technologies matured, Livermore’s expertise in thin films—designing, depositing, and precisely characterizing thin layers from a few micrometers thick down to individual atomic layers onto various substrates—and in metrology grew as well. Accuracy tightened from the nanometer to picometer (one trillionth of a meter) range. Coating designs and functionality evolved from periodic—narrow band, equal thickness, and repeating pattern—to aperiodic—broad spectrum, unequal thicknesses, and nonrepeating patterns. These advances were motivated by the growing needs of various applications, including EUVL, solar and planetary physics, and astrophysics, as well as laboratory-based tabletop lasers, free-electron lasers, and attosecond (10–18 or one quintillionth of a second) physics.

For these innovative technologies, the interfaces between coating layers that determine optical performance must be stable and have a smoothness at the atomistic level. But because no accurate theoretical models exist for these interfaces, researchers conduct detailed experimental studies focused on each layer and its thickness. Using these experimental data, Soufli and her team constructed models specific to each material layer in a system and studied how they interact. Armed with data from multiple studies, the team modifies the deposition process, refining and improving these complicated multilayer coatings. Reflectance measurements obtained at the exact EUV wavelengths of each coating are collected at the Advanced Light Source synchrotron beamline 6.3.2. at the Lawrence Berkeley National Laboratory (LBNL) Center for X-ray Optics (CXRO), led by Eric Gullikson, a key collaborator.

As applications become more dynamic and multifaceted, so do the requirements for these specialized optics and coatings. “The astrophysics community now needs broadband coatings with an extended wavelength range up to 90 nanometers to measure the EUV stellar flux or brightness of exoplanet host stars. Such measurements could help researchers understand how exoplanets lose their atmosphere to EUV ionization and heating. We don’t, however, have accurate refractive index values for the corresponding multilayer coating materials, in the 30- to 90-nanometer range. So, we need to accurately measure these values and use them in our models to provide realistic coating performance expectations,” says Soufli. Despite these challenges, Soufli and team members from LBNL and Institut d’Optique at Université Paris–Saclay, France, have recently developed new multilayer mirrors based on aluminum and scandium with record reflectance at wavelengths of 40 to 65 nm—a largely unexplored EUV wavelength range. 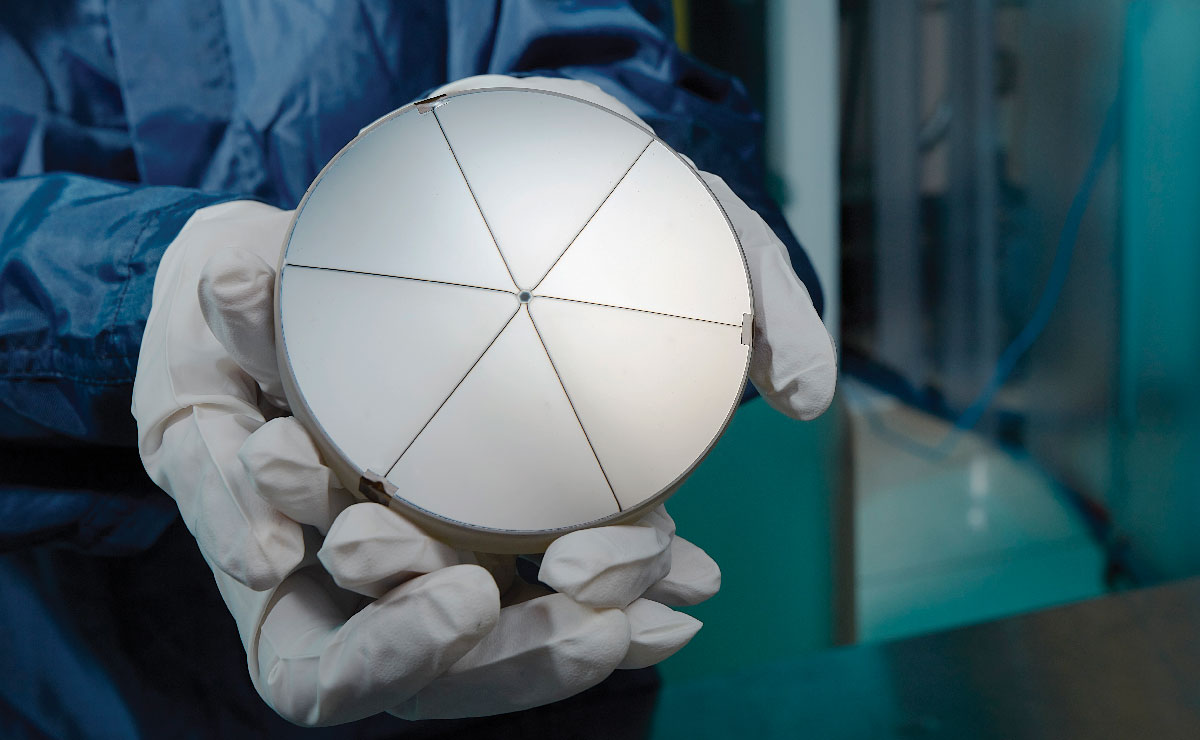 The Geostationary Operational Environmental Satellites contain the first telescopes that image at six different EUV wavelengths using a single pair of mirrors. A close-up view of a test secondary mirror (above) with six segments, coated with molybdenum–silicon and molybdenum–yttrium multilayers. Each segment is designed to reflect at a different EUV wavelength. An aperture selector in the telescope allows illumination of the specific coating segment needed to pass the desired EUV wavelength. (Photo by Garry McLeod.)

In 2010, NASA’s Solar Dynamics Observatory (SDO) launched into orbit to capture the highest temporal and spatial resolution, full-disk images of the Sun. SDO contained four telescopes bearing multilayer mirrors co-developed and calibrated by Lawrence Livermore. (See S&TR, January 2011, The Sun in All Its Splendor.) More recently, Laboratory scientists collaborated with their LBNL colleagues and others to develop multilayer mirrors for the Solar Ultraviolet Imager (SUVI) instrument onboard the National Oceanic and Atmospheric Administration’s (NOAA) Geostationary Operational Environmental Satellites (GOES)-16, -17, -18, which launched in 2016, 2018, and 2022, respectively, as well as GOES-U, expected to launch in 2024. The coatings on the SDO and GOES mirrors facilitate the imaging of individual plasma lines emitted from the Sun’s photosphere (surface) and atmosphere (corona). These images help scientists learn more about the impacts of the Sun’s solar flares and coronal mass ejections on satellites, aircraft, radio communication systems, the electrical grid, and astronaut safety, as well as the climate.

A major challenge in making a multilayer mirror is successfully controlling the coating thickness on a large and often curved substrate to ensure that all points on the mirror have the correct reflective response in the prescribed waveband or group of wavelengths. When applying a coating to a large-area optic, performance must be measured and corrected, if needed, on every point of the surface. “To make it, you must measure it,” says Soufli. Accurate, at-wavelength metrology provided during development and optimization and the final photometric calibration ensures the best possible performance of the optics. “Our collaboration with Berkeley Laboratory’s CXRO has produced some of the world’s most accurate EUV optics down to the picometer. We can measure coatings at the operational wavelength, whether for EUVL, space science, or any other application,” says Soufli. 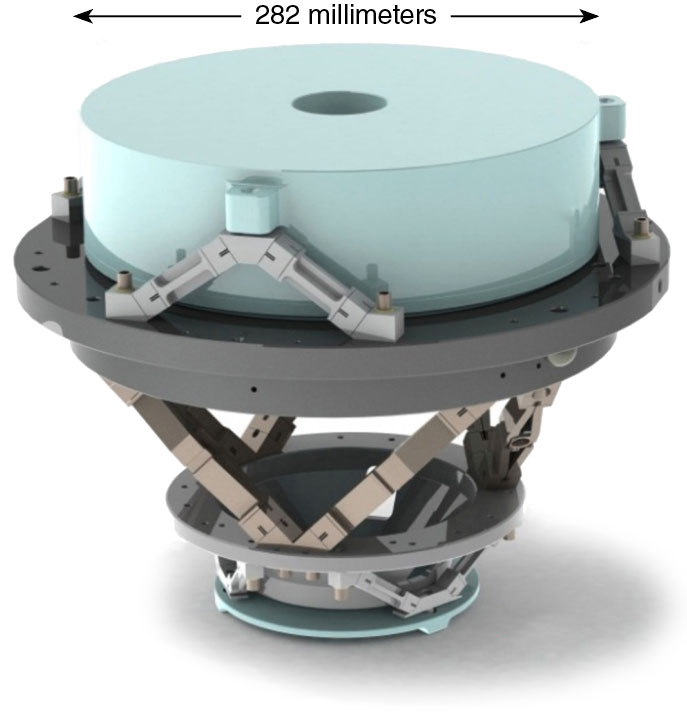 Continuing the march of computer microchips with ever-smaller features requires tools such as the Micro-Exposure Tool 5 (MET5). The result of a collaboration of Lawrence Livermore and Lawrence Berkeley national laboratories and Zygo Corporation, the MET5 is a micro-exposure tool with a numerical aperture of 0.5 that will enable the development of chips with nanometer resolution. This computer-generated image of an MET5 shows two aspherical EUV imaging mirrors (in light blue), which were multilayer-coated and characterized by Lawrence Livermore researchers, mounted in an adjustable optomechanical structure.

In another multilayer coating and metrological win, a collaborative effort among Livermore, LBNL, and optics manufacturer Zygo Corporation, funded by a consortium of semiconductor companies, achieved a breakthrough six years ago with the world’s first high numerical aperture (NA)—the range of angles over which an optical system can accept or emit light—EUV optical lithography Micro-Exposure Tool 5 (MET5), now operational at LBNL’s CXRO. For the MET5 project, the Laboratory developed the first diffraction-limited multilayer coatings for an EUV optical system with an NA of 0.5, a significant increase over commercially available systems that are limited to an NA of 0.33. This advance supports industry’s drive to print continuously smaller features and accommodate higher resolution imaging. The coatings combined high reflectance with near-zero stress and thickness variation of a few picometers across a 250-millimeter diameter area, ensuring that the coating does not deform the optic shape. Zygo sponsored the project and developed the substrates, which also must conform to strict specifications. The project delivered eight mirrors for the four MET5 optical systems to Zygo, including the one integrated into CXRO’s custom-developed EUV lithography tool. CXRO Director Patrick Naulleau explains, “High-quality optics are the heart of any lithography tool, but when dealing with EUV wavelengths, the requirements are incredibly challenging. To achieve perfect imaging optics as required for advanced lithography, the optical surfaces including the coatings must be controlled to the level of 0.1 nanometer.” Since completion of the MET5 tool at CXRO in 2019, it has been a research and development workhorse accelerating the realization of commercial-scale high-NA EUVL manufacturing.

Without EUV multilayer coatings, Soufli notes, producing smaller and denser computer chips with nanometer resolutions and examining the spectra of solar flares in detail would be impossible. “No avenue exists for addressing such technical and scientific challenges, except via EUV. The Laboratory understands that. By making substantial investments in this area, we maintain our role as pioneers,” says Soufli.