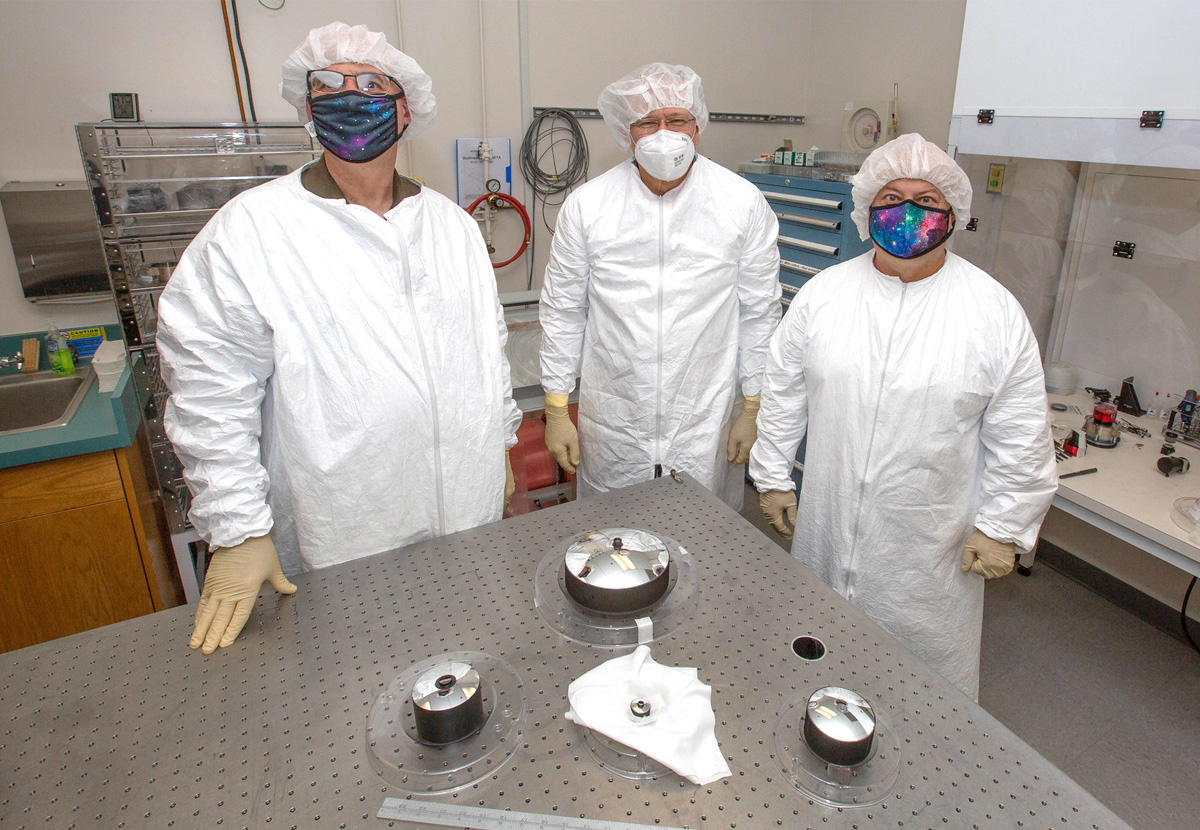 Eyes High in the Skies

What’s smaller than a breadbox, orbits hundreds of kilometers above Earth’s surface, and can take photographs that show cars on the road one minute, then provide images of galaxies millions of light-years away the next? The monolithic telescope, or MonoTele—a space telescope developed at Lawrence Livermore National Laboratory—can, with more images on the way. In 2021, a small satellite bearing an imaging payload featuring two MonoTeles hitched a rideshare on a SpaceX Starlink launch at NASA’s Kennedy Space Center in Florida.

The MonoTele is fabricated from a single, monolithic fused silica slab, optically shaped and with reflective coatings at both ends. One MonoTele has a high-resolution narrow field of view for Earth observation, the other has a high-sensitivity medium field of view for space domain awareness and astronomy applications. The compact optical imaging payload, called GEOStare2, is incorporated into a satellite about the size of a large shoebox: the Tyvak-0130 nanosatellite, designed and developed by Tyvak Nano-Satellite Systems, Inc. The GEOStare Space Vehicle 2 (SV2) payload-plus-satellite system, now orbiting at almost 550 kilometers above Earth’s surface, can take both monochrome and color images.

GEOStare SV2 is the most recent achievement of a four-year, $6 million Cooperative Research and Development Agreement (CRADA) between Lawrence Livermore and Tyvak, a Terran Orbital company. The collaboration seeks to develop compact, robust, high-performance telescopes for nanosatellites, transitioning the Laboratory’s MonoTele technology to space demonstration and eventual commercial use for applications such as space domain awareness and intelligence surveillance and reconnaissance applications. Alex Pertica, deputy program leader for the Laboratory’s Space Science and Security Program is principal investigator for the CRADA. The effort is headed by Livermore astrophysicist Wim de Vries, who leads a multidisciplinary team of engineers, physicists, and astrophysicists. In addition to designing the imaging payload and working closely with Tyvak to integrate the payload and nanosatellite, the Livermore team is responsible for analyzing the images captured in orbit. De Vries notes that in its first six months of operation, GEOStare2 has taken more than 29,000 images of Earth and space, with more pouring in every day. “The satellite and its imaging system never sleep,” he adds.

The story of “the little telescope that could do a whole lot” started long before the current CRADA. MonoTele inventor, optical engineer Brian Bauman, explains, “Like many good ideas, the monolithic telescope was born from a failed experiment.” In 2010, Bauman and a team were building a small conventional telescope that could be used in nanosatellites for Space-Based Telescopes for the Actionable Refinement of Ephemeris (STARE), a multi-institutional project to monitor space debris. (S&TR, April/May 2012, Launching Traffic Cameras into Space.) Once the telescope was aligned, it was given a “shake test,” submitting it to the kinds of forces experienced in a space launch. The team checked the telescope afterwards, only to find that the telescope had been shaken out of alignment, yielding blurry, out-of-focus images. 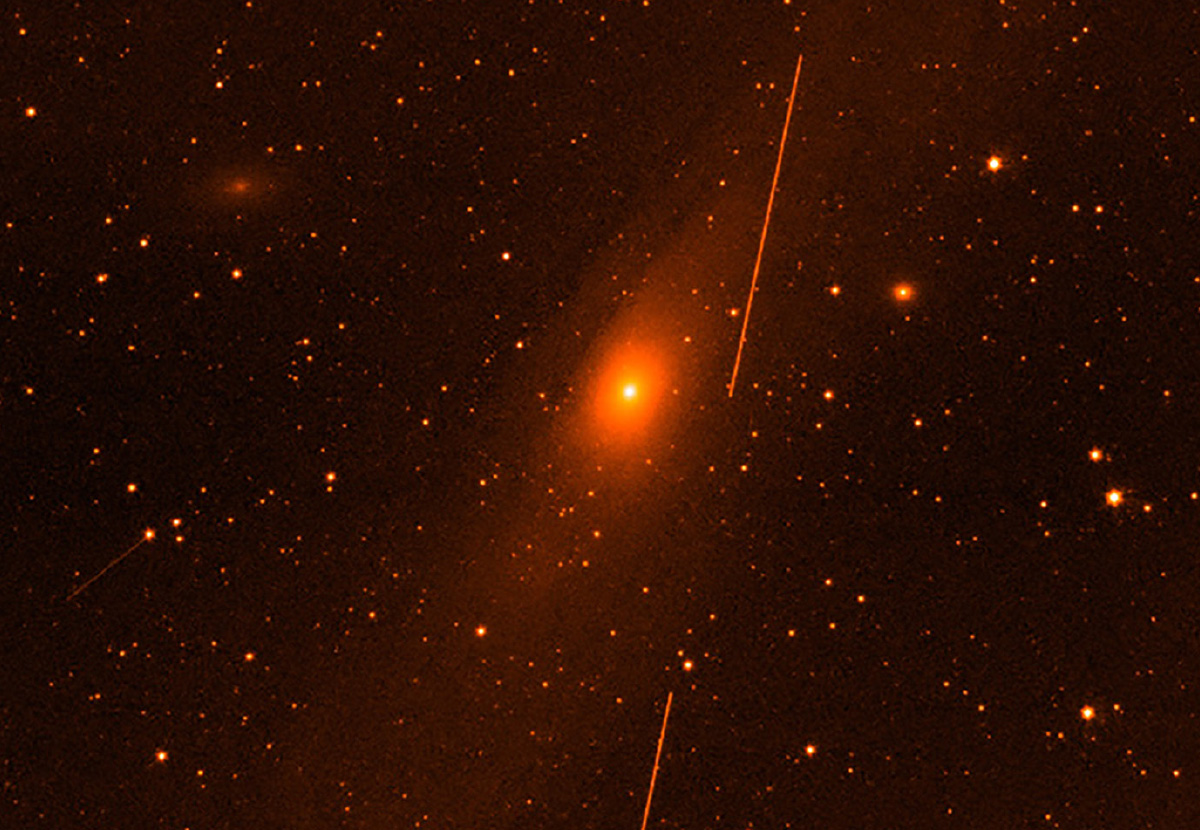 GEOStare2 peers outward, into the universe, when not focused on Earth or tracking space debris. This composite false-color image of the Andromeda galaxy, 2.5 million light years away, was created by stacking five wide-field-of-view images for an exposure of eight seconds. During these exposures, two satellites, represented as two aligned streaks in the image, moved through the field of view.

Bauman says, “I realized it was going to be very difficult to hold the primary and secondary mirrors in alignment as long as these two pieces of optical glass required fasteners to hold them in place.” He eventually came up with the notion of having a solid telescope created from one piece of glass instead of two. One inspiration for his breakthrough included the Livermore-inspired design of the Vera C. Rubin Observatory, previously known as the Large Synoptic Survey Telescope, a game-changing telescope in which the primary and tertiary mirrors are designed as a single piece of glass. (S&TR, September 2017, The Widest, Deepest Images of a Dynamic Universe.)

That’s not to say that bringing the MonoTele into being was easy. “Initially, I didn’t think a monolithic telescope could be fabricated from a single glass slab to the exacting, micrometer-level tolerances required to form the mirror surfaces,” Bauman notes. “So, we assembled the telescope from four glass pieces that we glued together. But that didn’t work terribly well and was difficult to align.” Eventually, thanks to a vendor’s improved, proprietary manufacturing processes, a monolithic telescope was formed from a single glass slab. Bauman’s invention resulted in a telescope that is shorter and more robust against shaking and vibration. Other MonoTele advantages include no need to focus, easier alignment between the telescope and the cameras that record the images, and insensitivity to temperature swings. All big pluses, considering the environment of space.

Bauman says, “The fabrication was only possible because, at this time, there existed glass with extremely high homogeneity and low absorption, modern manufacturing techniques, and modern testing techniques. “If we’d tried to fabricate the MonoTele 10 years earlier, I doubt we could have.”

And it wasn’t just the fabrication of the MonoTele that presented challenges. “Space is hard,” de Vries notes. If hardware breaks or malfunctions, one cannot just “go and fix it.” So, the hardware must be ultra-hardy and reliable. An orbiting satellite faces extreme temperature swings—from 80°C in the Sun to –80°C in shadow. “The MonoTele is well suited for this environment,” says Bauman. Additionally, the one-piece design eliminates much of the difficult mechanical engineering required by conventional telescopes.

GeoStare SV2 is the third time Lawrence Livermore has flown its telescopes with Tyvak’s satellite technology, a partnership that has yielded much in just a handful of years. The MonoTele got its first chance to shine when a Lawrence Livermore team led by de Vries partnered with Tyvak and the U.S. Air Force to develop GEOStare1, which launched in 2018 with a single MonoTele about 7.5 centimeters in diameter. The flight tested the performance of the telescope design for collecting remote sensing data for Earth observation, astronomy, and space debris tracking applications. “The test produced beautiful data and validated all our ideas,” says de Vries. (S&TR, April 2019, Space Program Innovation, One Small Satellite at a Time.) 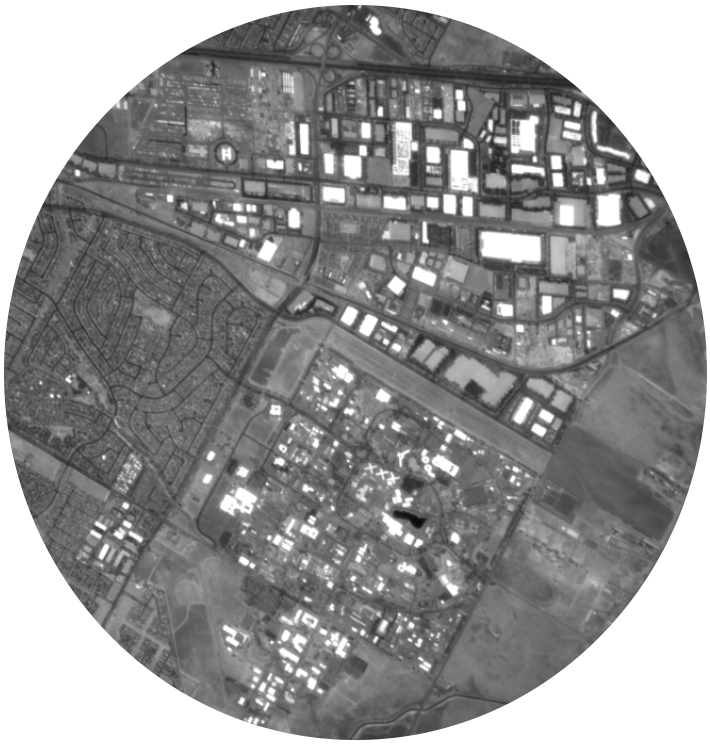 GEOStare2’s narrow-field-of-view telescope captured this image of Lawrence Livermore National Laboratory from an altitude of about 600 kilometers.

In 2020, a tiny 2.5-centimeter “mini-monolith”—about the size of a large earring—was incorporated into Tyvak’s Cerberus satellite. This tiny MonoTele took on the role of “star tracker,” measuring the positions of stars to determine the orientation of the spacecraft. De Vries says, “Tyvak is very flexible and open to taking risks. When their Cerberus satellite had some room, we asked if we could fly our new design for a mini-monolith, and they didn’t hesitate. They make things happen. It’s a great situation for advancing technologies quickly.”

Tyvak President Boris Becker adds, “Terran Orbital values our long-standing partnership with Lawrence Livermore and is honored to have the opportunity to work with Alex Pertica, Wim de Vries, and the talented professionals of their team. Together, we have developed and deployed a leading-edge capability in small satellite imaging. GEOStare2 has produced thousands of images of Earth in support of the Laboratory’s mission, from a satellite that could fit inside a backpack.”

The Livermore–Tyvak team is busy developing systems for the next CRADA mission, GEOStare3. De Vries notes that the imaging payload will be larger than that for GEOStare2, with four telescopes instead of two. One MonoTele will be optimized for the ultraviolet portion of the spectrum, a second for visible, a third for the shortwave infrared, and a fourth will be coupled to a prism to function as a point-source spectrometer, with all the telescopes focused on the same spot. The team is looking to launch the system sometime in 2022.

De Vries says, “We are excited for what the future holds. What is special about these small satellites and their tiny telescopes is how very capable they are. It allows us to put a long focal length, which in a classical telescope would be about a meter long, into something the size of a milk carton. And the images we have so far from GEOStare2 are fantastic, very impressive. We look forward to what we obtain from GEOStare3.” Pertica notes that eventually the goal is to have GEOStare systems that will be able to complement high-end, exquisite satellite systems by adding capacity and increasing how often data can be collected from a given location. He adds, “It’s really rewarding to put technology in space and demonstrate these new capabilities, capabilities that weren’t possible before nanosatellites and these incredibly compact, high-performance imaging systems.”