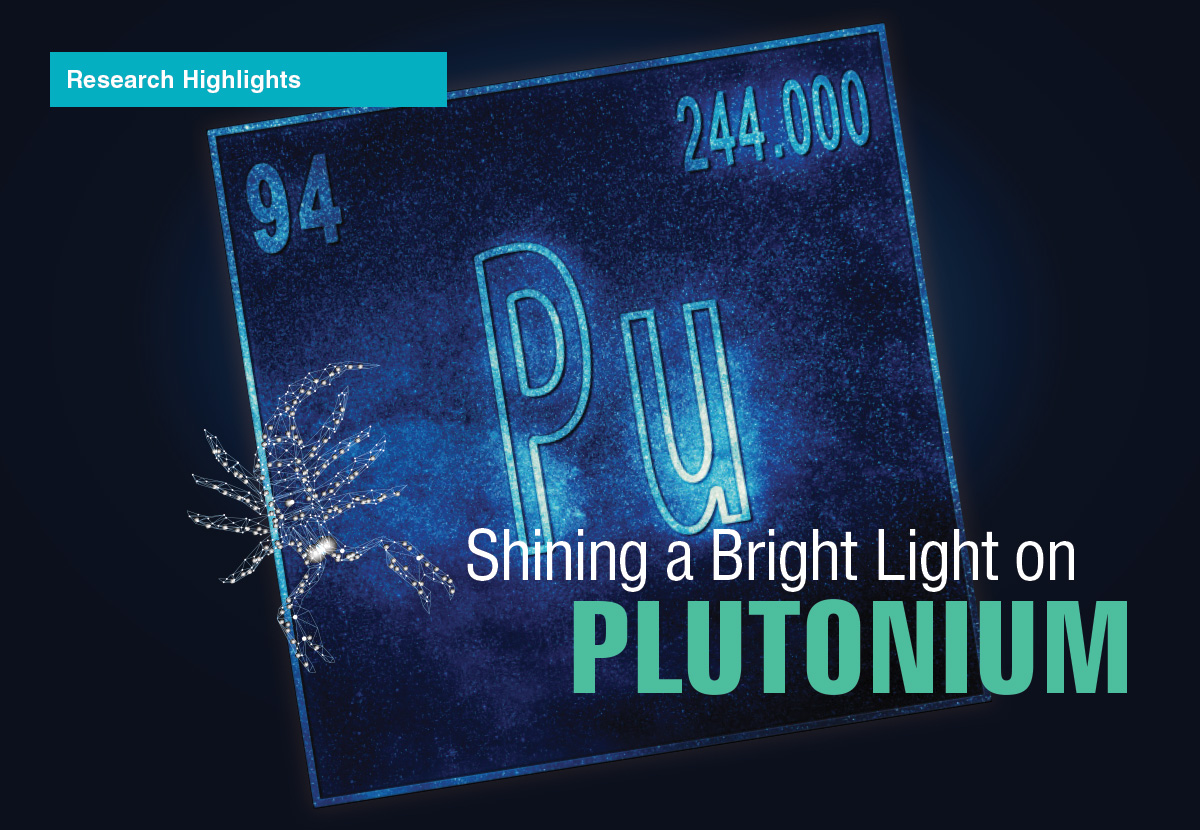 Shining a Bright Light on Plutonium

As the nation’s adversaries move to close the gap in weapon capabilities, Lawrence Livermore’s mission remains focused on supporting stockpile stewardship. Assessing weapon readiness becomes more challenging, however, with an aging stockpile and a workforce decades removed from the last live nuclear weapon tests. Computer simulations can model weapon behavior but require accurate experimental data on the behavior of the materials at the heart of the warhead.

Scorpius, a 125-meter-long linear induction accelerator diagnostic tool, is designed to generate high-speed, high-fidelity radiographic images of contained subcritical experiments with fissionable nuclear material, specifically plutonium. Once deployed underground at the Nevada National Security Site (NNSS), Scorpius’s multipulse flash x rays will offer researchers a view of the late stages of a nuclear weapon implosion. As a diagnostic, Scorpius will help identify the effects of aging and manufacturing methods on stockpile performance and inform future stockpile changes, including modernization programs and incorporation of enhanced security features. As a type of scientific classroom, Scorpius will offer training and knowledge for the next generation of experimentalists and weapon designers in the way underground testing experience and data enlightened designers decades ago.

“Scorpius represents a significant step forward in the diagnostics supporting the nation’s nuclear stockpile modernization,” says Mike Zika, deputy for Transformational Weapon Science in the Weapon Physics and Design Program of the Laboratory’s Weapons and Complex Infrastructure Principal Directorate. “The use of plutonium rather than non-fissile surrogate material will set Scorpius apart in enabling modern certification and assessment of the current and future nuclear stockpile.”

The advanced diagnostic tool will consist of four main components. Its injector will generate high-energy electron beam pulses, and accelerator cells will boost the injected electron beam energy to over 20 mega electron volts. In the downstream transport region, the high-energy electron beam will collide with a metal target generating x rays that penetrate test objects. Finally, a detector will convert the x rays into images recorded by a sensitive, high-speed camera. Because plutonium is very dense and moves very fast during the experiment, a short burse of intense x rays is required for the best image resolution. 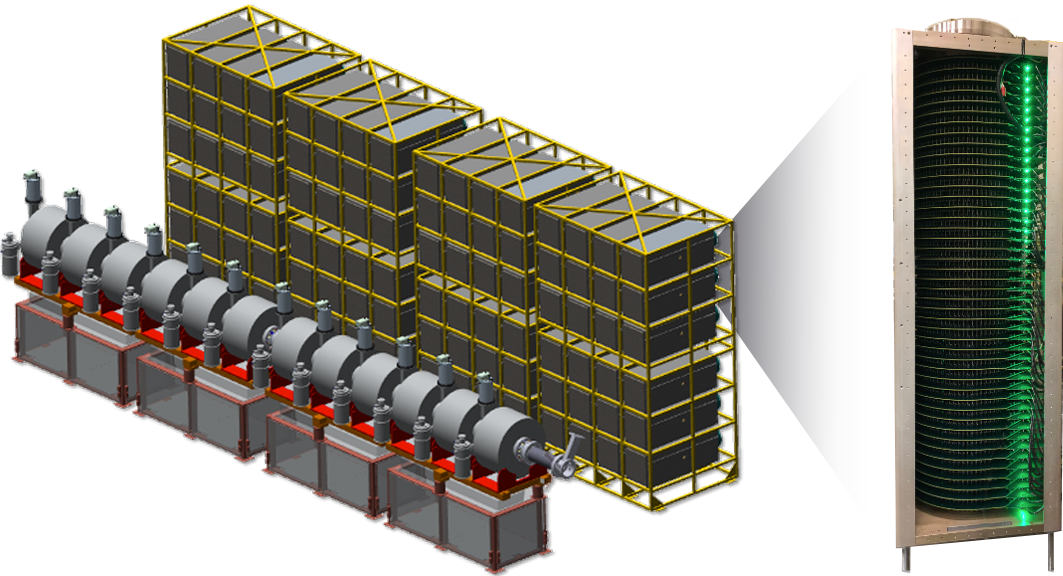 The Scorpius accelerator (pictured above), part of the Enhanced Capabilities for Subcritical Experiments (ECSE) portfolio, will enable high-fidelity, multipulse radiography for subcritical experiments at the U1a site at the Nevada Nuclear Security Site by 2025. The accelerator will be driven by Lawrence Livermore’s novel solid-state pulsed-power technology. (Image courtesy of ASD Technical Development and Communication Arts and Services at Los Alamos National Laboratory.)

Livermore’s innovative solid-state pulsed-power technology will drive the Scorpius accelerator and energize the injected electron beam. With pulsed power, energy gradually accumulates into capacitors and is quickly released, maximizing energy over time to reach exceptionally high power levels. The difference offered by the Livermore technology is its reliance on solid-state integrated circuits to create an electrical pulse rather than the separate generator bank used in older technologies. The Livermore pulsers are designed to make at least four 25,000-volt pulses, providing Scorpius unique flexibility to program pulse width and spacing and optimize the number of x rays imaging an object as a function of time.

“Scorpius will provide an unprecedented ability to tailor the radiographs to individual experiments,” says Zika. Dave Funk, the Los Alamos lead for the project, adds, “We’ve made a bold choice by choosing solid-state pulsed power. The Livermore technology gives us the opportunity to develop a machine like no other. This will enable transformational experiments, gathering the data many of us have long desired to see.” 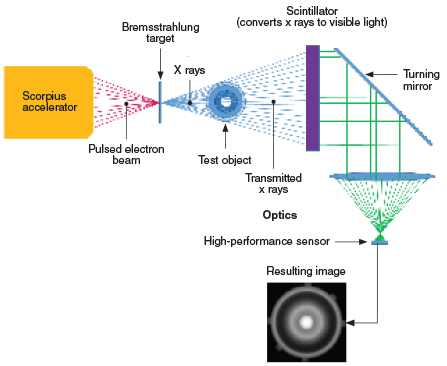 A short burst of intense x rays will pass through a plutonium test object, and the Scorpius detector will convert the detected x rays into high-resolution radiographic images. (Image courtesy of ASD Technical Development and Communication Arts and Services at Los Alamos National Laboratory.)

Livermore has already built prototype pulsers to perform integrated testing of the accelerator and injector cells designed by partners at both Los Alamos and Sandia national laboratories. Once the pulsers are tested with prototype accelerator and injector cells, Livermore will build all 984 pulsers specified for Scorpius. Flash x ray (FXR), a Livermore radiographic tool with double-pulse capability for high-speed imaging (S&TR July 2018, X-Ray Machine Does Double Duty), will evaluate selected components of the accelerator’s hardware and diagnostics during the design and build process.

A True View of Plutonium

Multipulse flash x rays made possible by Livermore’s pulsed-power approach will enable Scorpius to radiograph the late stages of nuclear weapon implosion when plutonium is under the most extreme conditions and pressure from explosively driven shocks. By using plutonium rather than non-fissile surrogates, Scorpius will provide more accurate data for computer simulations modeling weapon behavior.

While using the fissile material found in nuclear weapons, Scorpius experiments will remain subcritical. Subcritical experiments, using high explosives and plutonium, are carefully designed to ensure that the release of neutrons in a fission reaction decreases, rather than increases, over time so the chain reaction stops. When incorporated into sophisticated simulations, the data from Scorpius experiments can inform new safety design features factoring in the effects of aging and manufacturing methods on plutonium’s performance. 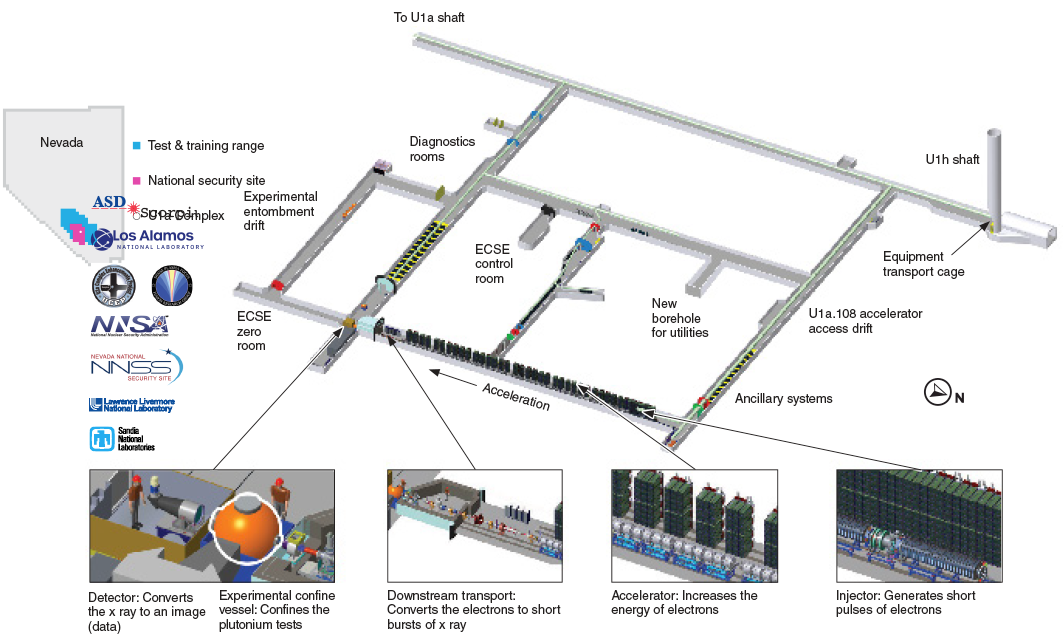 As the successor to the Cygnus radiography capability, which was named for an x-ray source in the Swan constellation, Scorpius is named for Scorpius X-1, the brightest extra-solar x-ray source. The name also reflects Scorpius’s underground location in Nevada, just like the desert scorpions that burrow beneath ground. Construction of the accelerator’s home in a corresponding U1a Complex Enhancement Project, led by NNSS, will require the excavation of a 130-meter-long tunnel 963 feet below grade, as well as the infrastructure to power, cool, and sustain the Scorpius machine throughout its 30-year lifecycle.

The project started in 2014 with the identification of a capability gap in fully understanding the late stages of explosion of a nuclear weapon. The following year, the project team agreed that multiple pulse technology at high energy—offering many images of implosions—would be the top priority. Work on the design of a multipulse machine with the initial plan focused on conventional pulsed power started. Then, the opportunity to consider a new pulsed-power technology developed by Livermore arose. “Looking for new ways to use technology allows people to be challenged and creative,” says Funk. The team changed design direction to incorporate solid-state pulsed power, and all partners agreed to the updated conceptual design for Scorpius in February 2019. 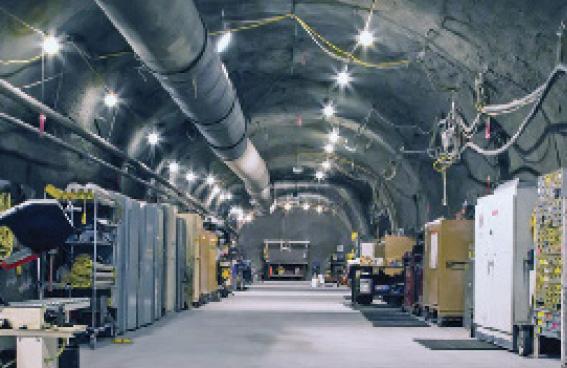 The Nevada National Security Site is the only place where subcritical experiments using plutonium and high explosives can be conducted. The U1a laboratory at the site, pictured above, is constructed nearly 1,000 feet underground. (Image courtesy of ASD Technical Development and Communication Arts and Services at Los Alamos National Laboratory.)

Now that the prototype pulsers have been delivered to partner laboratories and support Livermore’s integrated testing of the Los Alamos accelerator cell prototype, the team is looking ahead to equipment purchases and fabrication steps that will bring Scorpius to life. Commissioning of the injector at the Integrated Test Stand, planned for 2023–2024, will help establish and train an operations team of NNSS employees while providing a first systems-level demonstration of the technology. The multi-lab team expects Scorpius will be commissioned at full energy in U1a by 2025. “Anticipating national needs is our mission, and drives our timeline,” says Zika.

One of the first experiments planned will confirm the viability of Livermore’s modernization programs to lengthen the service life of an existing warhead while enhancing its safety, security, and reliability. Scorpius will also serve as a training tool for pulsed-power engineering—a technology with a limited pipeline of researchers, particularly in terms of understanding an all-solid-state machine, according to Zika. “Scorpius is the first of its kind in the world,” he says.

As deputy for Transformational Weapon Science, Zika, who serves in a newly created role and is responsible for the development of capabilities and partnerships to transform the nuclear security enterprise. Scorpius falls squarely in the categories of both capability and partnership development. “The technology is remarkable, and the Scorpius team never loses sight of its mission to fill a critical capability gap,” says Zika.