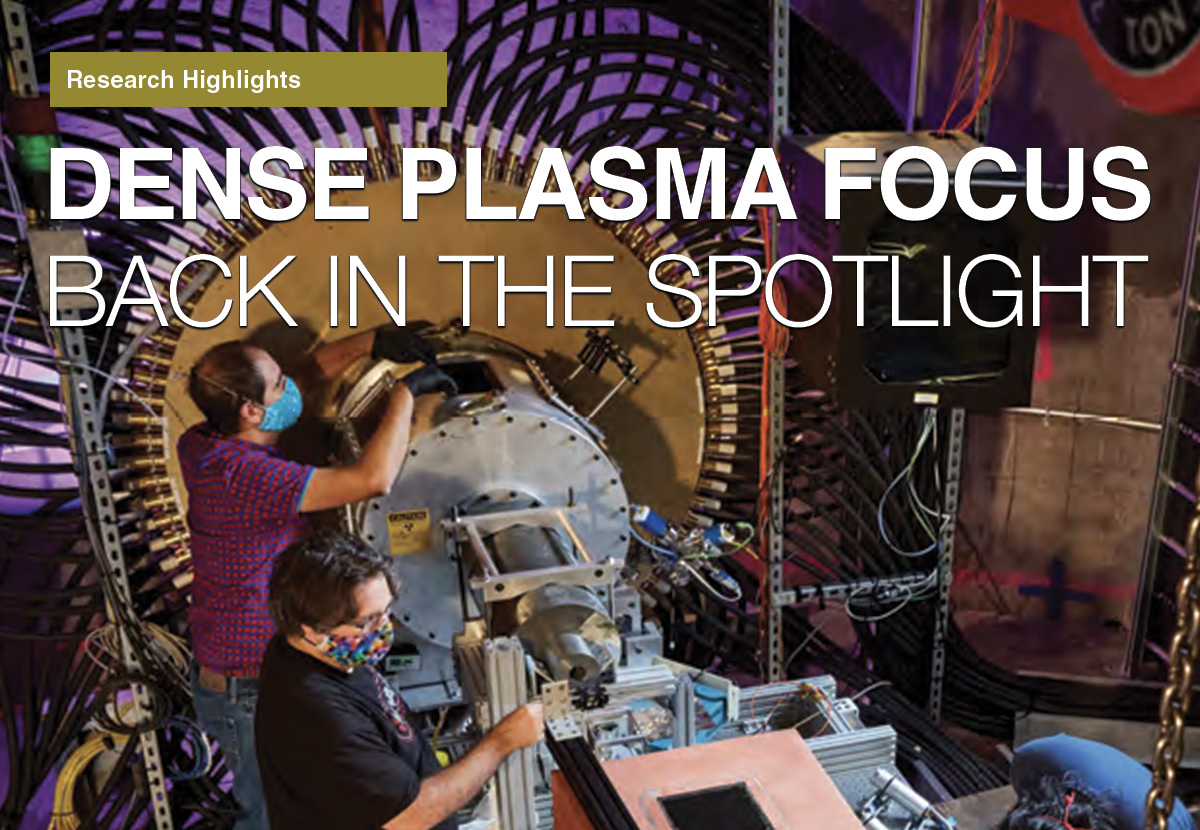 USING neutrons to “look through” fast-moving experiments requires an intensely bright neutron source originating from a very small spot. One tool that suits this scientific role is the dense plasma focus (DPF). The DPF uses a strong magnetic field to compress a plasma into a discharge called a “pinch” that creates a short, intense pulse of x rays, neutrons, and directed ion beams.

Introduced in the 1960s, the relatively compact size and uncomplicated design of the devices made them attractive as the foundation for fusion power plants, although that application was eventually discounted after decades of research. More recently, the DPF has been considered as a neutron source for radiography and other national security applications. An important complement to x-ray imaging, fast neutron imaging enables researchers to examine the lighter elements in objects of study. Unlike current commercial and industrial neutron imaging sources, the DPF generates an incredibly bright but very short flash (less than 100 nanoseconds) that is well-suited for taking still-frame pictures of highly dynamic processes.

The inability to model the DPF plasma with sufficient fidelity, however, has limited researchers’ detailed understanding of the physics needed to develop methods that produce a consistent, reliable, and intense neutron pulse. “Decades ago, the DPF was essentially a black box operated by rules of thumb,” says Livermore scientist Alex Povilus.

After a multiyear Livermore research program, the DPF’s time to shine may have finally arrived. A team led by researcher Andréa Schmidt has been using hundreds of computer simulations to understand—physically—what occurs in a DPF discharge. With this knowledge, Schmidt’s team has developed a deeper understanding of the effect of different DPF design aspects—pulsed-power capacitor bank characteristics, anode length and shape, operating voltage, device pressure—on its neutron pulse. Now, a prototype DPF design and ongoing modifications are informed by modeling predictions. The ability to guide experimental design using simulations and then challenge the simulations with experimental results has enabled the team to make remarkable progress in DPF design. The team’s ultimate goal is to create a new flash neutron imaging capability for the nuclear weapons enterprise.

In this image of visible light emission from the pinching plasma discharge, a dense plasma focus (DPF) produces a plasma sheath that pinches, over the course of tens of nanoseconds, eventually becoming unstable and producing an energetic ion beam. The ion beam’s bombardment of a dense plasma target produces neutrons.

MJOLNIR is the latest and largest iteration in a series of smaller projects developing the DPF. Initial efforts, seen as highrisk but high-reward, were funded by Livermore’s Laboratory Directed Research and Development program. Early simulations informing an effective, predictable DPF (S&TR July/August 2013, Coming Through in a Pinch: Z-Pinch Plasma Heralds Novel Accelerator Designs) were performed using LSP, the computationally intensive particle-in-cell (PIC) code. Faster-running fluid codes could not adequately model ion distributions in a DPF’s plasma discharge and, as a result, could not correctly predict properties of the resulting neutron pulse, limiting their utility.

Schmidt’s first PIC simulations, although primitive compared to the simulations run today, matched the neutron yield for experimental DPF devices. Her team scaled to bigger devices and modeled other teams’ experiments. “Skeptics thought our models were slow, therefore, not useful,” says Schmidt. “As we learned more, performance improved and generated confidence in our approach. A sponsor stepped up to fund a project to build a larger machine for our experiments.” 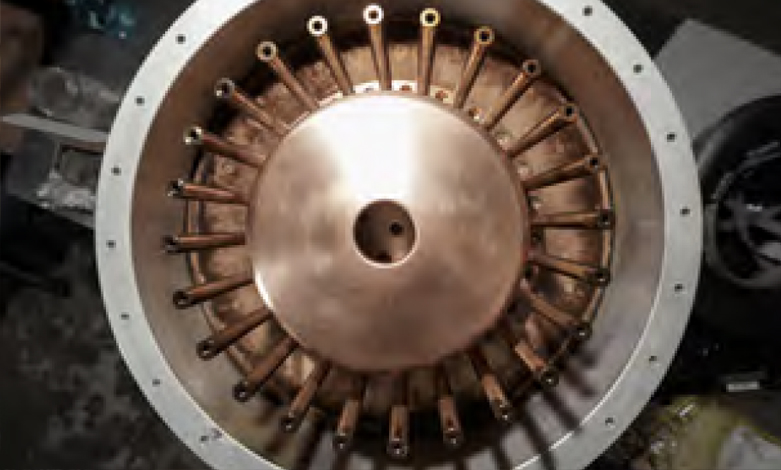 The length and shape of the anode and cathode, as well as other components of the DPF device, were designed to reliably produce the most neutrons possible based on hundreds of kinetic plasma simulations. (Photo by Garry McLeod.)

Schmidt’s team later developed a hybrid methodology using both fluid and PIC methods in Chicago code, the successor to LSP, making it possible to run simulations with larger electrodes and sufficiently accurate physics models in a reasonable computational time. The Livermore team ran models in parallel with construction of the current prototype, continually improving the design and proposing novel electrode shapes for future experiments. 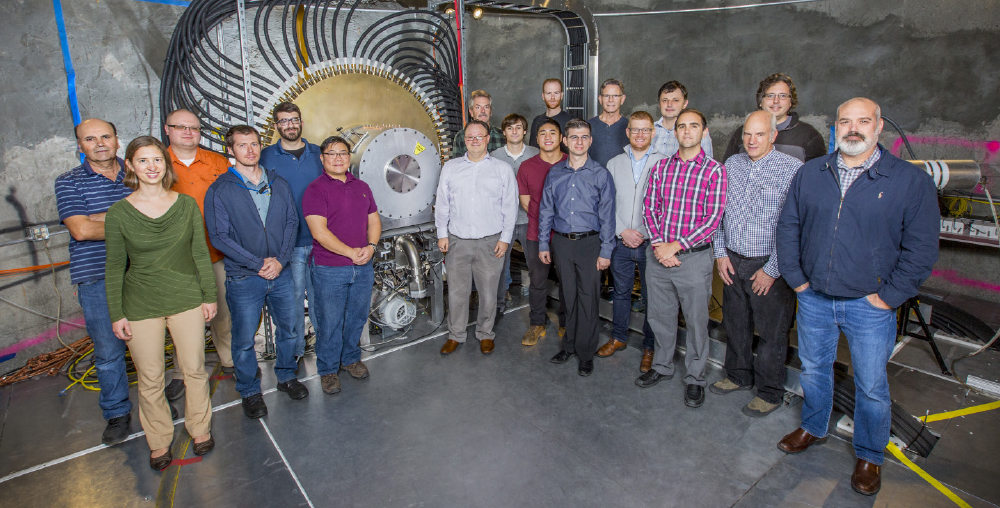 The neutron yield in MJOLNIR’s initial shots reached 2.5×1010. Optimizing pulsed power and anode/cathode design have led to an order-of-magnitude increase in neutron yield, with recent shots achieving up to 4×1011 neutrons per pulse at 2.2 MA peak current. After operating at 1 MJ of stored energy, experiments are under way to apply 2 MJ, the highest energy level ever applied to a DPF.

“Past DPF projects tried and failed to achieve high neutron yields at the plasma currents we’re aiming for,” says Schmidt. “Without our predictive modeling capabilities, past researchers could observe their source get brighter or dimmer when they made modifications, yet they had a limited understanding of what was happening in the plasma.”

MJOLNIR’s neutron source is located in a 25-foot diameter pit, one level above capacitor towers providing a total of 2 MJ and one level below ground level, where the project’s diagnostic digitization equipment is shielded from the electromagnetic pulse and ionizing radiation generated each time the device fires. “We’re diagnostics-rich for greater certainty in gathering experimental data from firing,” says Povilus. “We’re also able to reconfigure measurements and deploy new diagnostics rapidly to help better understand features we see in the pinch physics.”

Once the MJOLNIR prototype demonstrates that a DPF can meet requirements for a flash neutron radiographic source, the team will create a MJOLNIR-like machine for use at facilities such as Livermore’s Site 300. If successful at Site 300, other x-radiographic facilities in the National Nuclear Security Administration complex, such as the Dual Axis Radiographic Hydrodynamic Test (DARHT) facility at Los Alamos National Laboratory and Scorpius, an x-ray source being built forthe Nevada National Security Site, may be interested incomplementing their capabilities with neutron radiography. 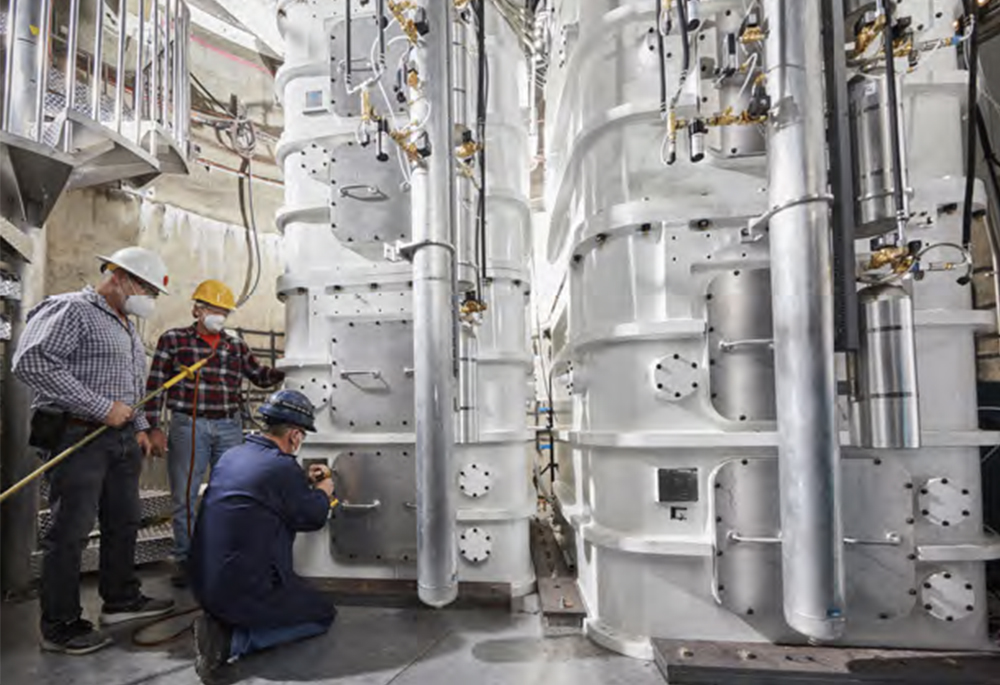 The Right Shot at the Right Time

MJOLNIR can provide a less expensive platform for developing diagnostics as well as a compact source that can go to the experiment, rather than the other way around. “Not everyone is willing to maintain an accelerator facility for a flash radiation system,” says Povilus. “MJOLNIR is a compact alternative that could be fielded within existing facilities to provide additional radiograph capability. If you need a quick pulse, this is an economical solution for many radiography applications.”

The DPF, discounted decades ago for fusion power plants, is enjoying a resurgence of interest as short-pulse neutron sources for national security applications. The Livermore team, powered by detailed simulations, has advanced understanding of the DPF plasma discharge beyond what earlier researchers could have imagined. The interplay between simulations and experiment has enabled development of a machine to support new applications.

Livermore scientist and MJOLNIR team member Steve Chapman finds satisfaction in improving a technology that held so much unrealized promise in the past. “We’re coming back for a long-forgotten tool on the shelf,” says Chapman. “The DPF wasn’t dead, only dreaming.”