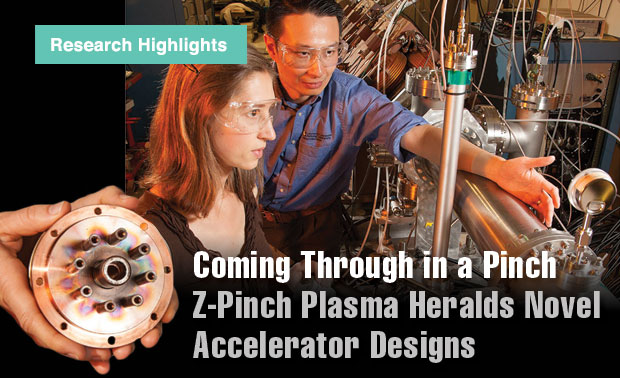 Particle accelerators are a fundamental tool of modern science for advancing high-energy and nuclear physics, understanding the workings of stars, and creating new elements. The machines produce high electric fields that accelerate particles for use in applications such as cancer radiotherapy, nondestructive evaluation, industrial processing, and biomedical research. The steeper the change in voltage—that is, the more the voltage varies from one location to another—the more an accelerator can “push” particles to ever-higher energies in a short distance.

With current accelerator technologies, electric-field gradients for ion accelerators are limited to approximately 30 megavolts per meter and low peak currents. However, all that may change, thanks to research conducted by Livermore’s Vincent Tang, Andréa Schmidt, Jennifer Ellsworth, Steve Falabella, and Brian Rusnak to better understand the acceleration mechanisms in Z-pinch machines. Scientists may eventually be able to use Z-pinches created from dense plasma foci for compact, scalable particle accelerators and radiation-source applications. With this simple technology, electric-field gradients greater than 100 megavolts per meter and with kiloampere-class peak currents may be possible.

In its simplest form, a Z-pinch device uses the electric current in a plasma to generate a magnetic field that compresses the plasma, or “pinches it down.” The “Z” designation refers to the direction of the current in the device: the z axis in an x, y, z (three-dimensional) coordinate space. “This simple plasma configuration was the first one to be identified,” says Tang, an engineer who led the Z-pinch research. He explains that the static spark one gets between a doorknob and a finger is a type of Z-pinch plasma in nature. “In a basic laboratory setup,” says Tang, “one runs a current through two plates, the current ionizes a gas and forms a plasma, and the plasma then self-pinches.” In a Z-pinch machine, a cylinder of plasma (ionized gas) collapses on itself, momentarily producing extremely high temperatures and pressures at the center of the cylinder as well as very high electric fields.

Z-pinches have been a subject of interest since the 1950s, when they were explored as a possible avenue for creating fusion power. At that time, research with pinch devices in the United Kingdom and U.S. proliferated. However, instabilities in the plasma led to this effort being abandoned. “Still,” says Tang, “the experiments created neutrons—a classic signal of fusion. It just wasn’t thermonuclear fusion, which is what scientists thought was needed to achieve energy gain.”

Nuclear fusion was one of Tang’s interests in graduate school, so he had Z-pinch devices in mind when, in 2007, he was working on research involving compact directional neutron sources at Livermore. “I had just read a few papers on the high-electric-field gradients produced in Z-pinch devices. In the past, most people weren’t interested in specifically using the electric fields produced in a Z-pinch. The fields were considered a by-product and a nuisance, because most researchers were focused on using the devices for thermonuclear fusion. I brought up the possibility of using these fields for some of our accelerator applications to my colleague Brian Rusnak.” However, such machines were not well enough understood to harness the electric-field gradients they produced. “It was essentially a wide-open field of inquiry, with many unknowns,” says Tang.

Put the Pinch under the Microscope

In the fall of 2010, Tang obtained Laboratory Directed Research and Development (LDRD) funding to better understand fast Z-pinches and demonstrate that they could accelerate particles such as protons and deuterons. Tang and his team combined new simulation and experimental approaches in their research. They concentrated their efforts on Z-pinches generated by dense plasma focus (DPF) devices. These devices have high-electric-field gradients, are technologically simple, and have open geometries that allow for beam injection and extraction.

A DPF Z-pinch consists of two coaxially located electrodes with a high-voltage source connected between them, typically a capacitor bank. When the high-voltage source is energized with a low-pressure gas in the chamber, a plasma sheath forms at one end of the device. In the “run down” phase, the plasma sheath is pushed down the outside length of the inner electrode, ionizing and sweeping up neutral gas as it accelerates. “One can think of it as essentially a plasma rail gun,” Tang explains. When the plasma sheath reaches the end of the electrode, it begins to collapse radially inward during the “run in” phase. In the final pinch phase, the plasma implodes, creating a high-density region that typically emits high-energy electron and ion beams, x rays, and neutrons.

These Z-pinch images taken (left to right) before the pinch, during the pinch, and after the pinch were collected within a 120-nanosecond time interval during a Livermore experiment.

For the simulation side of the research, the team turned to a fully kinetic, particle-scale simulation, using the commercially available LSP code for modeling a DPF device. LSP is a three-dimensional, electromagnetic particle-in-a-cell code designed specifically for large-scale plasma simulations. The code calculates the interaction between charged particles and external and self-generated electric and magnetic fields.

Schmidt, who leads the simulation effort, explains, “We had to use the more computationally intensive particle approach instead of a fluid approach because the plasma distribution functions are not Maxwellian. The ions form beams when they accelerate, and high electric fields are created partially through kinetic electron instabilities that are not modeled in a fluid code. Until recently, though, we just didn’t have the computing power or the tools to model a plasma particle by particle.”

With LSP running on 256 processors for a full week on Livermore’s Hera machine, the team became the first to model what happens in the pinch process at the particle scale. The results of the simulations reproduced experimental neutron yields on the order of 107 and megaelectronvolt-scale high-energy ion beams. “No previous, self-consistent simulations of DPF pinch have predicted megaelectronvolt ions, even though ion energies up to 8 megaelectronvolts have been measured on kilojoule-class DPF devices,” notes Schmidt. 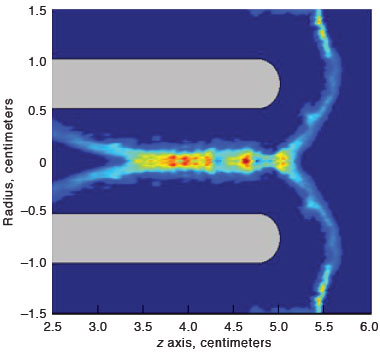 Deuterium ion density is shown inside this first fully kinetic simulation of a dense plasma focus Z-pinch. The pinch occurs on axis where the density is highest (red). The cross section of a cylindrical hollow anode is shown in gray.

The team also compared its results with those from simulations performed with fluid codes and with hybrid codes that combine aspects of kinetic and fluid codes. “The fluid simulations predicted zero neutrons and were not capable of predicting ion beams, says Schmidt. The hybrid simulations underpredicted the experimental neutron yield by a factor of 100 and did not predict ions with energies above 200 kiloelectronvolts. The more complex, fully kinetic simulation was necessary to get the physics right.”

The team also designed, fabricated, and assembled a tabletop DPF experiment to directly measure the acceleration gradients inside the Z-pinch. The first gradient recorded was a time-of-flight measurement of the DPF’s self-generated ion beam using a Faraday cup. “These measurements, made during subkilojoule DPF operation, now hold the record for the highest measured DPF gradient in that energy class,” says Ellsworth.

A second and more sophisticated measurement of the gradient is now under way. The team has refurbished a radio-frequency-quadrupole accelerator to make an ion probe beam for the pinch plasma. (See the figure below.) The accelerator produces a 200-picosecond, 4-megaelectronvolt ion probe beam, which is injected into the hollow center of the DPF gun just as the pinch occurs. The researchers will use this tool to measure the acceleration of the probe beam through the Z-pinch. From that, they will deduce the acceleration gradient of the plasma and demonstrate the possibility of using the Z-pinch as an acceleration stage. “The probe-beam experiments will directly measure for the first time the particle acceleration gradients in the pinch,” says Tang. 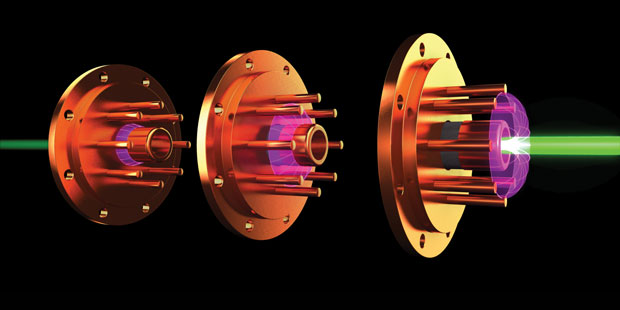 An artist’s rendering shows the formation of a plasma sheath (purple) and Z-pinch (white), along with the injection and acceleration of a probe beam (green) through the pinch plasma. (Rendering by Kwei-Yu Chu.)

Accelerating into a Bright Future

The initial measurements of beam energies, accelerating fields, and neutron yields are promising, matching well with simulation results. “The device is producing high gradients,” says Tang, “and we’re proving that one can use Z-pinches to accelerate injected beams. This research opens a world of possibilities for Z-pinch systems.”

The most advanced application would be the use of Z-pinch devices as acceleration stages for particle accelerators. In addition to being compact, the devices are technologically simple, which means less cost and potentially less to go wrong. They also produce gradients much higher than those obtained with today’s standard radio-frequency stages. Some near-term applications might include using Z-pinch devices to produce well-defined particle beams for nuclear forensics, radiography, oil exploration, and detection of special nuclear materials.

With the LDRD phase of DPF Z-pinch research coming to a close, Tang and his team are exploring various uses of a Z-pinch device with agencies in the U.S. departments of Energy, Defense, and Homeland Security. “It’s a very exciting time for us,” Tang says. “We now have a predictive capability for this phenomenon. As a result, we have a better idea of what happens in a Z-pinch plasma configuration. We hope to apply this discovery to future generations of accelerators and other areas of research. It’s a fundamental discovery and a contribution to basic science understanding. With this new simulation capability and the ramping up of the probe-beam experiments, we see an exciting future ahead.”