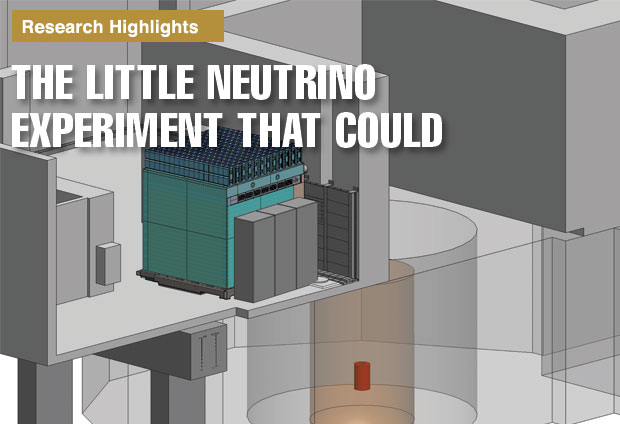 The Little Neutrino Experiment That Could

Many experiments conducted by Lawrence Livermore researchers are designed to explore questions of fundamental science. Others are intended to test-drive new mission-critical technologies. Perhaps the most exciting experiments are those that undertake both objectives. PROSPECT, the Precision Oscillation and Spectrum Experiment, is a unique neutrino–antineutrino detection project aimed at investigating fundamental particle physics and improving detection sensitivity for nuclear fission reactions.

The PROSPECT collaboration began in 2013, and includes Livermore physicists Nathaniel Bowden, Jason Brodsky, Tim Classen, and Michael Mendenhall, as well as colleagues from the National Institute of Standards and Technology (NIST), Brookhaven and Oak Ridge national laboratories, and 10 universities. Over the last six years, the detector was designed, then assembled at Yale University, and later installed at Oak Ridge’s High Flux Isotope Reactor (HFIR)—a user facility that provides a high-intensity neutron source for materials science and isotope production experiments. The PROSPECT detector began collecting data in 2018. 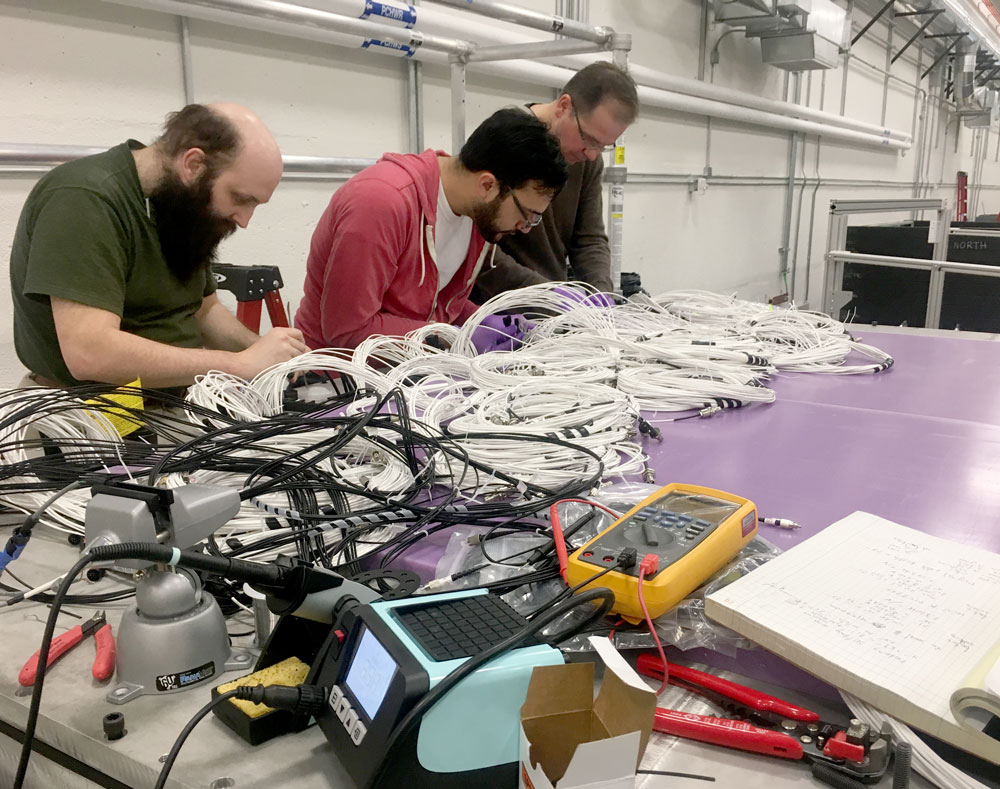 Compared to other detectors, which can weigh up to 50,000 tons, the 4-ton PROSPECT detector is more moderate in size. In 2016, the PROSPECT team won the Department of Energy’s Office of Science funding competition for neutrino research projects that were, among other criteria, “modest in cost and timescale.” Bowden, who serves as the project’s co-spokesperson, says, “Many researchers are excited about small experiments in neutrino detection, and our collaboration is at the forefront with the first published results. PROSPECT is also the first full-scale detector operating aboveground, which opens up possibilities for mobile reactor monitoring technology.” Additional funding comes from Livermore’s Laboratory Directed Research and Development Program, the Heising–Simons Foundation, and other partners.

Since its discovery 60 years ago, the neutrino has continually intrigued the physics community. (See S&TR, December 2012, Positively Scintillating Neutral Particles Brighten Scientific Prospects; and July/August 2016, A Detector to Study the Neutrino's Nature.) Just when the elementary particle’s three “flavors” (electron, muon, and tau) were finally understood, along came the possibility of a fourth—the sterile neutrino—whose existence would pose new questions about the Standard Model of physics.

Neutrinos are electrically neutral, have a smaller mass than other elementary particles, and usually pass through matter undetected. Successful neutrino detection at a nuclear reactor hinges on exploiting the inverse beta decay (IBD) process, in which the neutrino’s antiparticle—the antineutrino—collides with a proton, leaving behind a positron and a neutron. PROSPECT measures the time delay between the proton–antineutrino collision and subsequent capture of the neutron, thus identifying IBD events. In other words, Mendenhall explains, “The positron carries away the antineutrino’s incoming energy, which allows us to measure that quantity.”

In recent years, experiments at nuclear reactors have detected fewer antineutrinos than predicted, leading physicists to hypothesize that the missing particles were transforming into unobservable sterile neutrinos as they traveled. PROSPECT probes this anomaly by searching for a particular signature: neutrino oscillation.

When a neutrino is created, it starts in a quantum superposition of three underlying mass states that represent the three flavors. As the neutrino travels away from its point of creation, the differing mass of those underlying states causes oscillation—wherein the neutrino transforms from one flavor to another. Each flavor state generates a unique oscillation signature, represented by a variation in the neutrino detection rate with the distance traveled (the baseline). For electron antineutrinos from a nuclear reactor, the baseline at which oscillation first becomes noticeable is at about a 1-kilometer distance from the reactor. Bowden states, “The oscillation signature is the key to understanding the differences between prediction and observation. If a fourth type of neutrino exists, its oscillation baseline would have to be much shorter than a kilometer to bring prediction and observation into agreement.”

Measuring the position and timing of IBD events relative the the HFIR facility’s reactor core requires sensitive instrumentation to operate in what Bowden calls “an extremely challenging environment.” To get close enough to the reactor core to detect short baseline oscillations, the PROSPECT detector must be located aboveground. However, in this location, cosmogenic neutrons, the high-intensity conditions created by HFIR’s 85-megawatt reactor core, along with site-specific factors such as the reactor’s steel-reinforced concrete floor, all affect the experiment. Notes Mendenhall, “This background interference can swamp the data, which is why detectors are usually positioned underground.”

Weighing in at approximately 4 tons, the PROSPECT detection system arrived at HFIR in early 2018. (Photo courtesy of the PROSPECT collaboration.)

The PROSPECT team mitigates the effect of background events with multilayered shielding around the detector and by conducting tests, in which the reactor is turned on and off, to measure background levels. Bowden explains, “By combining the ability to measure particle type, position, and energy in a space-efficient system, the PROSPECT detector can identify and distinguish antineutrino interactions and background events with high efficiency.” Such capabilities have given PROSPECT unprecedented accuracy, despite operating close to a research reactor at the Earth’s surface. 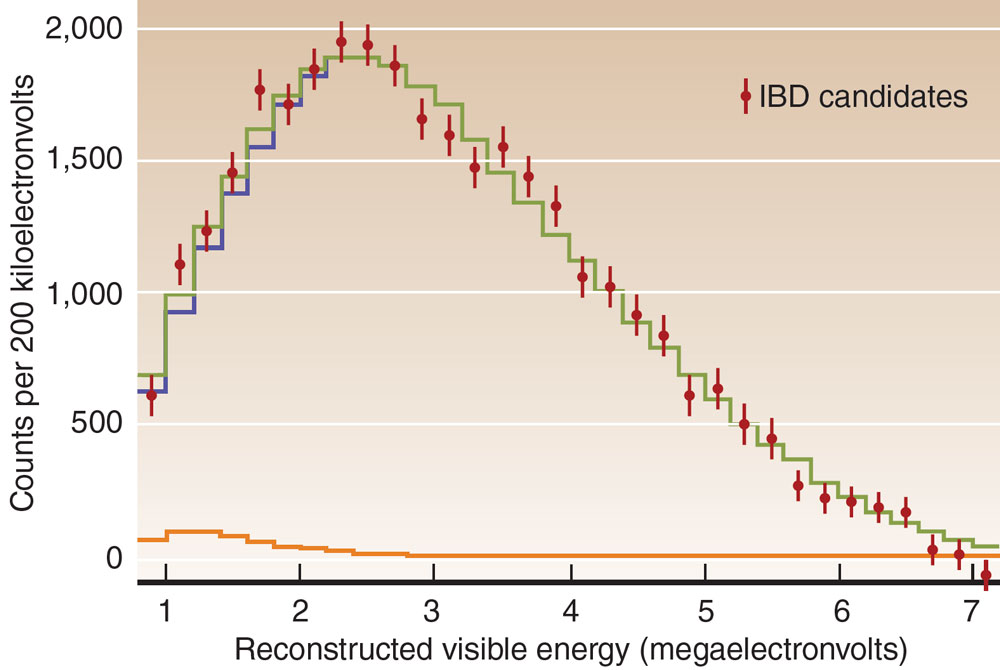 During the design and construction phases, Livermore tested PMTs, set up the data acquisition electronics, and ran Monte Carlo computer simulations to refine aspects of the detector’s functionality. Mendenhall says, “We configured off-the-shelf waveform digitizers for data collection and developed the analysis toolchain for simulation data, which became the process for analyzing results from the experiment.” Since PROSPECT came online, the Livermore team has maintained the software analysis framework and continues to study the processes that generate background events. PROSPECT data is stored on the Laboratory’s high-performance computing systems.

Livermore’s nuclear nonproliferation efforts stand to benefit from PROSPECT’s results. Measuring antineutrino energy spectra at a nuclear reactor site helps researchers better understand fuel mixture, power level, and other characteristics of the reactor. HFIR’s highly enriched core is powered by uranium-235 (235U). In fact, more than 99 percent of neutrinos emitted by HFIR come from 235U fission, a process that enables researchers to establish a reference point for testing predictions associated with a single isotope. (In reactors that consume a mixture of 235U and plutonium-239, the observed neutrinos come from a combination of two different energy spectra, which increases the difficulty of isolating each isotope’s independent contributions.)

PROSPECT has recorded more than 31,000 IBD events. Results are compared with a predicted 235U model of antineutrino energy spectra from nuclear reactors. Initial data have shown the best-ever measurement of an energy spectrum in this context. “We are seeing six times more antineutrinos than anyone has previously observed,” says Bowden. The research team uses these data to precisely define the 235U antineutrino energy spectrum and, therefore, inform modern physics models. Mendenhall adds, “We expect the statistics to improve as we complete analysis of more data that have already been collected.”

As the PROSPECT detector continues to operate, the system provides opportunities for detailed study of multiple phenomena, including the evaluation and management of background sources. “We detected neutrinos from day one. The team has been excited to see the project evolve from computer simulations into an operational detector,” states Mendenhall, who worked on PROSPECT at NIST and subsequently “followed the project” to Livermore.

The PROSPECT team seeks to improve predictions and detection technologies that will make nuclear reactor monitoring more precise and feasible. One intriguing possibility is the development of mobile detection systems. Bowden explains, “Over time, we can improve detection capabilities for any given reactor site, but unless detection systems can move between reactors, comparisons are difficult to achieve. The PROSPECT detector provides an important capability demonstration for new reactor safeguard applications.”

The detector’s exceptional sensitivity and ability to gauge short-baseline neutrino oscillations may one day solve the “missing antineutrino” anomaly and lead to the discovery of a fourth neutrino flavor. Meanwhile, the PROSPECT team has developed a plan for a second phase that can extend the experiment’s sensitivity to smaller oscillation amplitude values. Bowden asserts, “With this technology, we could possibly make a groundbreaking discovery in neutrino physics.”