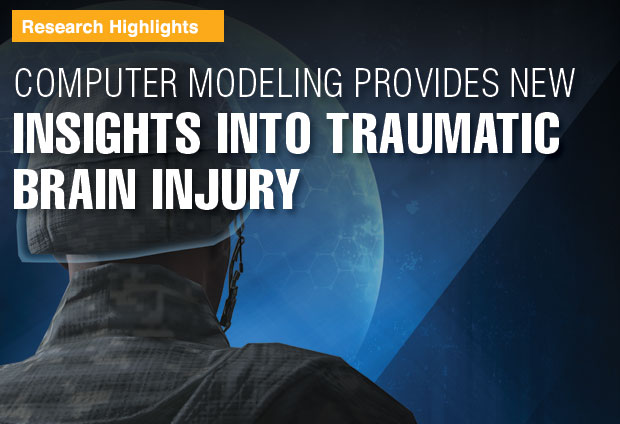 Simulations combining advanced Livermore software with some of the world’s most powerful supercomputers have made remarkable strides in furthering stockpile stewardship and enhancing scientific understanding of how materials interact and behave under extreme conditions. For the past decade, Livermore physicist Willy Moss has used the Laboratory’s high-performance computing (HPC) resources to help medical researchers and U.S. Department of Defense (DOD) scientists understand and prevent traumatic brain injury (TBI).

Moss’s latest simulations, conducted with Livermore computational engineer Andy Anderson, support experimental findings that the neurodegenerative disease known as chronic traumatic encephalopathy (CTE) can result from head accelerations caused by either blasts—from a grenade or improvised explosive device, for example—or impacts such as those in contact sports. Furthermore, the simulations help explain how CTE can occur even in the absence of concussion, defined as a head trauma that causes immediate symptoms.

The Livermore simulations were part of a large-scale study, funded by several federal agencies and other organizations, in which Moss and Anderson joined more than 40 medical researchers led by Lee Goldstein, associate professor at Boston University School of Medicine. The Livermore researchers used computational modeling to investigate why both impact and blast were linked to CTE, whereas concussion resulted only from impact. The study’s results were published in 2018.

Warfighters and Athletes at Risk

TBI and CTE have become of increasing concern to DOD, with some 380,000 personnel affected. Although soldiers serving in combat zones are particularly vulnerable to TBI, earlier this year a study showed that thousands of U.S. troops could suffer TBI from repeated exposure to head trauma while training with high explosives or rocket launchers. Soldiers using these weapons subject their skulls and brains to sudden acceleration and loads (force) below the threshold of a concussion.

CTE is found not only in military veterans but also in athletes such as football players—some as young as 17—and others with a history of repetitive brain trauma, both with and without signs of concussion. In fact, about 20 percent of CTE cases diagnosed in the Boston University brain bank did not have a history of concussion. CTE is a neurodegenerative disease characterized by abnormal accumulation of a protein called tau, which serves a structural function in normal brains but ceases to perform that function and accumulates around small blood vessels in the brains of CTE sufferers. The disease spreads slowly, killing brain cells and causing behavioral changes and eventually dementia. Symptoms do not usually appear until years after the head trauma, as seen in some National Football League (NFL) players who began to show symptoms only after retiring from the league. In the first part of the study, Boston University researchers examined four brains from teenage athletes who died within four months of receiving a head impact injury. The athletes exhibited a spectrum of post-traumatic pathology, with one case of early-stage CTE and two cases of abnormal accumulation of tau protein. Brains from a control group without recent head injury did not show the same pathological changes. 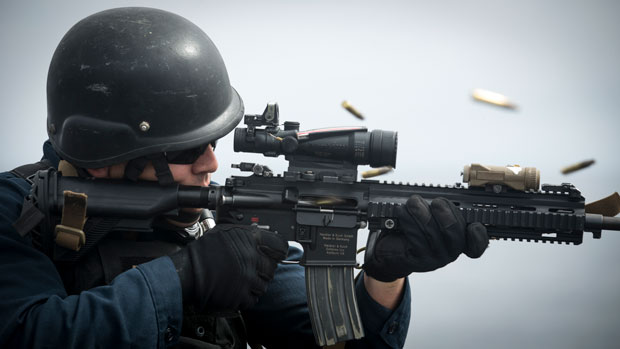 The researchers also conducted experiments subjecting laboratory mice to the two different injury mechanisms linked to CTE—sports-related impact and military-related blast exposure. The researchers detected the same brain pathology in the head-injured mice as in the injured teenagers. Both mechanisms showed strong evidence linking head acceleration to TBI and early CTE. None of the mice experiencing a blast suffered a concussion. However, some degree of concussion occurred in the majority of mice following impact, despite similar head motion in the two injury mechanisms—both of which triggered CTE pathology. This result suggested that concussion and CTE might be unrelated. “The findings from the animal experiments were very surprising,” says Anderson. “So, Willy and I turned to supercomputer simulations to take a closer look.” The simulations confirmed that the mechanisms that trigger concussion may be distinct from those that lead to CTE. The simulation results also provided important insights into the origin of concussion.

Code to the Rescue

Moss has used simulations to study head trauma in support of U.S. warfighters for many years. Nearly a decade ago, he and Livermore mechanical engineer Michael King sought to better understand TBI using Livermore’s hydrodynamics code ALE3D, originally developed to model the fluidlike flow and shock responses of materials exposed to a nearby detonating weapon (see S&TR, March 2010, A New Application for a Weapons Code"). When run on one of Livermore’s massively parallel computers, ALE3D can simulate how a blast generates waves of pressure and how those waves interact with structures in their path, including helmeted heads (see S&TR, June 2017, A National Security Code Is Reborn for Industry).

Using a simplified head model, the three-dimensional simulations modeled the detonation of high explosives and the blast wave’s propagation, revealing that the blast wave was focused by the helmet to cause pressure on the skull exceeding the external blast pressure. The simulation results, published in 2009, further confirmed the utility of using HPC to protect U.S. warfighters and inform helmet design. “Our blast simulations received a lot of scientific, public, and military attention,” says Moss.

As a result of the 2009 findings, the U.S. Army asked Moss and King to conduct a computational study to determine whether the pads used by the NFL could protect against military-relevant impacts better than foam pads then used in Army combat helmets. The simulations showed that for comparable thicknesses, the NFL pads did not outperform the current Army helmet pads. However, the simulations’ most significant finding was that a slight increase of only one-eighth of an inch in the thickness of Army helmet foam pads lessens the severity of impact by 24 percent (see S&TR, April/May 2012, A Simple Way to Better Protect Soldiers against Head Trauma. “We found an extreme sensitivity to changes in the thickness of the standard-issue three-quarter-inch foam pad,” says Moss. The results of the study are being incorporated into the Enhanced Combat Helmet, the next generation of Army combat helmets. 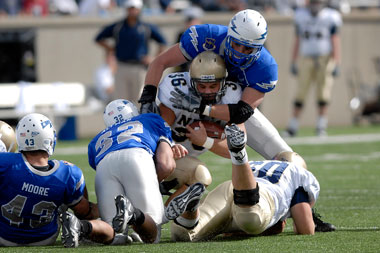 CTE has also been found in the brains of people playing contact sports, even in cases involving no history of concussion. (Photo courtesy of U.S. Air Force.)

Goldstein, already familiar with the power of HPC from previous work with Moss and colleagues, asked Livermore to simulate the blast and impact experiments involving laboratory mice. “We needed a way to assess what was going on inside the heads of the mice, and the only way we could probe that space was with computation,” explains Moss. He and Anderson once again turned to ALE3D and Livermore supercomputers to simulate blast and impact-loading conditions. Overall, approximately 100 simulations were performed, repeating the same head motions seen in the mice experiments. Each simulation used 60 to 100 processors and took a few hours to run.

“We first looked at pressure fields in the brain resulting from both impact and blast and didn’t see anything surprising or suggestive,” says Moss. “Then we looked at shear stress and saw a clear difference. We suspected we were on to something important.” Closer examination showed that shear stresses occurred before any gross motion of the head occurred. The high-shear region remained nearly stationary and persisted around the point of impact. Even with a low-magnitude concussive impact—one that does not rip or tear brain tissue—shearing can disrupt small blood vessels and nerve fibers in the brain. In contrast to an impact, a blast produces a global effect on the skull and brain, with the pressure wave flowing fairly uniformly around the head and resulting in very little shear stress in the brain.

The Livermore investigators surmised that localized loading from an impact, producing a high concentration of shear stress, leads to a concussion, which takes place in less than a millisecond, before significant head movement. In contrast, CTE seems to be triggered by repetitive impacts to the head from injuries sustained during contact sports and from repeated military blast exposure, both of which involve significant head acceleration. This commonality of impact- and blast-induced accelerations both leading to CTE built on an earlier study by Goldstein, Moss, and others that showed that blast-induced head acceleration caused CTE in mice. The simulation data from the current study, consistent with that from animal experiments, helped the researchers conclude that the mechanisms that cause concussion are distinct from those that lead to CTE. “Someone can develop CTE without ever having been concussed,” states Moss.

The researchers hope the study’s findings will guide the development of new diagnostics, therapeutics, and protective equipment to help people affected by TBI or at risk for CTE. In work funded by the Department of Energy and the Veterans Administration, Livermore researchers, partnering with other national labs and the University of California at San Francisco, are using the Laboratory’s HPC resources to develop precision diagnostics and optimized treatments for TBI patients based on HPC predictive modeling. In addition, Livermore bioengineers are helping develop TBI therapies such as deep brain stimulation (DBS) for DOD. Currently the subject of clinical trials, DBS involves surgically implanting electrical leads to disrupt certain electrical signals with pulses delivered to selected brain tissues (see S&TR, June 2018, Delving Deeply into the Brain's Mysteries).

In these samples of Livermore simulations from mouse experiments, two-dimensional slices of the three-dimensional simulations are shown. Circles represent vertical slices of a mouse skull, cerebral spinal fluid (CSF), and brain. (top) The simulations show why overpressure (blue) from both (a) impact and (b) blast caused significant head acceleration—which is linked to CTE—while only impact sometimes resulted in concussion. The key is the clear difference in shear stress (red) caused by localized loading from impact. (bottom) Three time intervals over a 150-microsecond duration show shear stress persisting in the impacted brain but not in the brain subjected to a blast.

“We want to help the warfighter with our simulations—help their well-being in combat and for the rest of their lives,” states Moss. As for CTE linked to contact sports, Moss says, “We have a special responsibility not only to our warfighters but to our kids, as well. We have been too focused on concussion. However, concussion and CTE seem to be distinct entities, so we shouldn’t use concussion as the sole criterion for determining whether someone has possibly suffered a brain injury.” He suggests, for example, more research to protect athletes from repetitive hits by redesigning helmets. The Livermore simulations are once again demonstrating that applying advanced simulation techniques originally conceived for stockpile stewardship can be equally useful for protecting people in other ways, too.