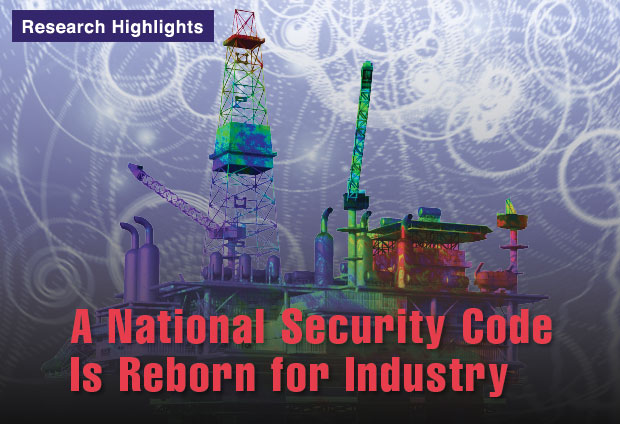 A National Security Code Is Reborn for Industry

For decades, Lawrence Livermore researchers have developed simulation codes that run on some of the world’s most powerful supercomputers. These codes predict how materials and systems will perform in a variety of environments, including extreme conditions of temperature and pressure. Livermore’s far-reaching predictive capability through simulations is particularly important for national-security efforts such as stockpile stewardship, the National Nuclear Security Administration’s program to ensure the safety and reliability of the nation’s nuclear stockpile.

A highly versatile and popular Livermore code is ALE3D, whose name refers to arbitrary Lagrangian–Eulerian three-dimensional (3D) analysis. First developed nearly 30 years ago, ALE3D is a multiphysics software tool used by researchers nationwide to solve various engineering and physics problems important to national security. Since its creation, ALE3D has been limited to U.S. citizens working on mission-relevant applications at Lawrence Livermore and other national laboratories, as well as the departments of Energy, Defense, and Homeland Security and their contractors. This limitation has inhibited the Laboratory from partnering with nondefense industries and universities to solve many other challenging problems using ALE3D.

Now, a team led by Livermore computational engineer Chad Noble is developing a version of ALE3D called ALE3D-4I (“ALE3D for Industry”) that can be widely shared with research partners interested in a much broader range of applications. The new code will be available for use on the Laboratory’s massively parallel supercomputers—machines with tens of thousands of processors working in tandem. U.S. companies and academics interested in using the code and Livermore’s high-performance computing (HPC) resources will be able to do so through the Laboratory’s High Performance Computing Innovation Center (HPCIC). (See S&TR, March 2015, A Hub for Collaborative Innovation.)

ALE3D-4I is the culmination of an effort launched in 2016 with the allocation of special funds to Noble’s team. The funds, called innovation development funds, are administered by Livermore’s Industrial Partnerships Office and come from the licensing and royalty fees that the Laboratory earns from Livermore-developed technologies transferred to industry. The initial version of ALE3D-4I, expected to debut in the summer of 2017, will feature a subset of ALE3D capabilities relevant to potential industrial and academic partners.

Lawrence Livermore’s ALE3D code is a versatile multiphysics simulation tool used nationwide to solve two-dimensional (2D) and three-dimensional (3D) engineering and physics problems. As with similar programs, ALE3D divides an object into a meshlike assemblage of simple elements. These elements are the units on which the computer calculates the object’s changing behavior. However, ALE3D has the ability to “relax” the mesh and force more elements into a specific area of interest, for greater accuracy at that spot. In this simulation of a shocked material, the mesh is relaxed around the area of greatest interest to the researchers.

Developing ALE3D-4I and making the code available to industrial and academic partners will not only provide new, unmatched capabilities to these partners but also further the Laboratory’s missions by making existing algorithms more robust through application across a broader spectrum of uses. The effort also provides potential funding to develop new capabilities of interest to both industry and program sponsors and promote growth of the code team, resulting in deeper expertise across the project.

As the “ALE3D for Industry” name implies, a principal goal of ALE3D-4I is to provide industry a unique advanced computer simulation tool for improving the nation’s economic competitiveness. “U.S. industry is looking for a competitive edge by leveraging HPC,” Noble explains. He notes that ALE3D’s capabilities and name recognition, coupled with Livermore’s longstanding know-how in software quality assurance and code verification and validation, make the code highly sought after by the private sector. Although several commercial and open-source codes similar to ALE3D-4I are available, these codes have yet to offer multiphysics capabilities coupled with the ability to run on powerful supercomputers. The Livermore code will fill that market gap by providing both capabilities, together with ready access to other Livermore resources at the HPCIC.

Noble and other Livermore representatives have been holding discussions with potential industrial partners who are interested in using ALE3D-4I to make their operations more productive and their products more cost-effective, for a greater edge in the highly cost-driven global marketplace. Potential applications include the advanced manufacturing of high-technology components, home care products, and food processing and safety. The rapidly growing industry of additive manufacturing—also known as 3D printing—is also keen to conduct simulations modeling possible breakthrough technologies. Basic agreements with industrial collaborators will provide access to the code, as well as to Livermore supercomputers and user support. Furthermore, additional capabilities can be developed for an additional fee.

Universities are also interested in using and extending the capabilities of ALE3D-4I, such as developing advanced algorithms and modeling turbulence and other complex physics. Joint research with universities is expected to propel scientific discovery and also create a hiring pipeline through which the Laboratory can find talented computational scientists and engineers. Lawrence Livermore offers week-long training courses three times a year for new users, and Noble sees both industry and university personnel coming to the Laboratory for training. He says, “We want to make it easy for the new user.” 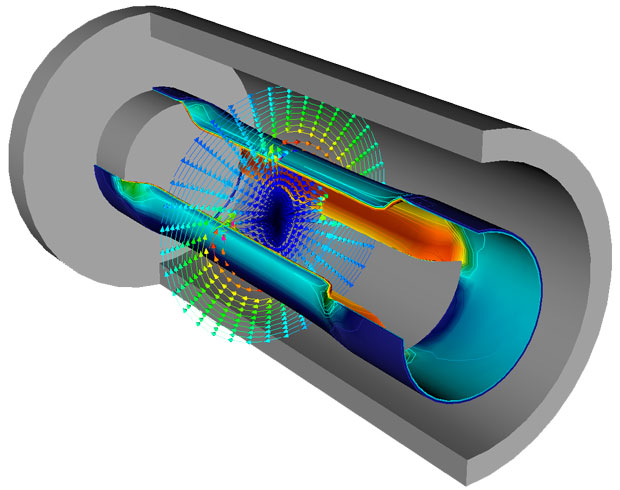 ALE3D’s hydrodynamics capability captures the behavior of both solids and fluids. The code has been successfully used for applications involving long (implicit) and short (explicit) timescales and both two-dimensional (2D) and 3D simulations. Providing 2D capability enhances flexibility, because a user might opt for 2D when 3D would be either too computationally demanding or simply unnecessary, such as when simulating a cylindrical object or another problem involving a symmetrical axis. The code employs finite-element analysis, a method for analyzing engineering problems in which an object is divided into a meshlike assemblage of simple elements. These elements are the units on which the computer calculates the larger object’s changing behavior. Lines forming the element boundaries intersect at junctions called nodes, which define the elements’ movement and deformation. Each node can move in any direction, depending on the stresses and strains applied.

ALE3D began as a hydrodynamics and structure-deformation code to model the behavior of solids and fluids undergoing shock-induced deformation and high strain rates. Over the years, developers added multiphysics capabilities representing various phenomena in the form of physics “packages.” Users can now select from this library of packages, including heat conduction, chemical reactions and kinetics, material models, and magnetohydrodynamics. Even with large problems and complex geometries where several packages are working in tandem, the code can maintain accuracy and efficiency.

The “arbitrary” in the code’s name refers to the ability to choose either the Lagrangian or Eulerian method of depicting an object on a mesh. The Lagrangian technique is used typically for structural simulations, while the Eulerian component is often used to simulate fluid flows. A Lagrangian mesh moves with the object, which greatly simplifies the related equations. These representations are accurate so long as the mesh remains intact, but in extreme cases—such as a material undergoing large deformations—the mesh can distort, tangle, or collapse, bringing the simulation to a stop. Eulerian mesh boundaries are distinct and fixed, and the object flows through the mesh.

ALE3D embodies ALE technology that Livermore has pioneered and where the Laboratory continues to advance the state of the art. The codes allow a user to not only switch between the Lagrangian and Eulerian techniques but even combine the two so that the mesh “relaxes” at the leading edge of the object. The amount of relaxation is determined by the user, who can “weight” the simulation so that more zones are forced into a specific area of interest, for greater accuracy at that spot. Supporting mesh relaxation broadens the scope of applications in comparison to codes that are restricted to Lagrangian- or Eulerian-only approaches.

For some applications, ALE3D can deliver accuracy similar to that of other simulation techniques but with as few as one-tenth the number of mesh elements, greatly reducing the amount of computer memory required. ALE3D operates on a wide variety of platforms, from laptops—for simple problems or debugging—to supercomputers. However, the ability to operate on massively parallel machines has always been a core requirement for the code, and industry and university collaborations using ALE3D-4I will be able to take advantage of Livermore’s HPC facilities to tackle complex problems quickly and efficiently.

A newly developed commercial version of ALE3D called ALE3D-4I (“ALE3D for Industry”) enables simulations relevant to U.S. industry. In the case of laser-based additive manufacturing, the simulations precisely predict the characteristics of a metal powder melted by a laser. This simulation depicts heat from the laser moving from left to right, melting and fusing the powder particles. The colors represent different temperatures, with blue being the coldest and red the hottest. The great amount of detail revealed by the simulation even includes spattering (red dots).

While work proceeds on ALE3D-4I, Noble’s team continues to enhance the full version of ALE3D. For example, engineers are implementing new features that will benefit laser-based additive manufacturing, where a laser melts a metal powder to build up the desired shape. Experiments at Livermore have shown that ALE3D does an excellent job of predicting how the metal powder melts. The simulations take into account factors such as the recoil force of vaporizing metal, changing surface tension, spattering, and cooling by evaporation and radiation. The code even captures the indentations made in the substrate, the flow of melted powder, and peak surface features. Many additional enhancements to ALE3D can be expected to grow from expanded application of the code with research partners in industry and academia.

In addition to adding new physics capabilities, the team is also making modifications to enable ALE3D to run well on Sierra and other next-generation supercomputers. Sierra, scheduled to arrive at Livermore later in 2017, will be at least five times more powerful than current Livermore supercomputers. (See S&TR, March 2017, A Center of Excellence Prepares for Sierra.) Noble says, “We’re confident that ALE3D-4I is going to fill a need that the engineering software industry can’t currently provide.” Filling that gap will undoubtedly help make U.S. industry more competitive in an increasingly challenging global marketplace.