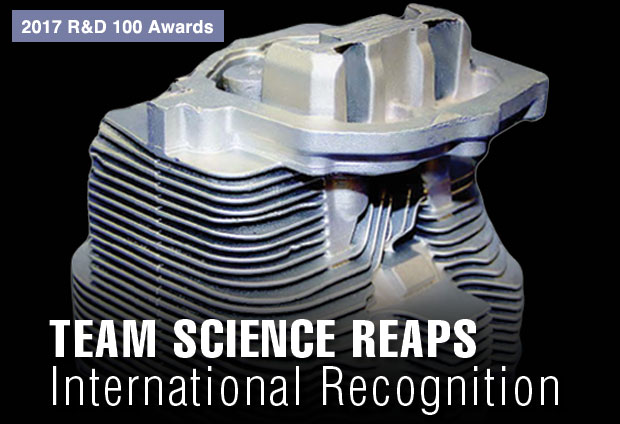 Lawrence Livermore has always been an institution that stresses the importance of collaboration. Researchers work closely with colleagues throughout the Laboratory, industry, other national laboratories, and academia to develop advanced technologies and achieve scientific breakthroughs that might otherwise remain undiscovered.

This year, Livermore was a codeveloping organization for four R&D 100 Award–winning technologies. One research effort led to the development of geometrically enhanced photocathodes that stand to radically improve the performance of time-resolved x-ray detectors. Another focused on creating an aluminum–cerium (ACE) “superalloy” with reduced cost and superior performance. A third award was given for a hydrogen safety sensor that could help make hydrogen-fueled vehicles commonplace. Finally, the National Risk Assessment Partnership (NRAP) Toolset won an award for its suite of computer models that can help assess the environmental risk of potential carbon dioxide (CO2) sequestration sites.

Photocathodes—devices containing photoemissive material that gives off electrons when exposed to light or other radiation—are used to convert incident photons into electrons, which can be manipulated by electric and magnetic fields to record the time and spatial evolution of the incoming signal. Applications include laser-driven plasma imaging, radiography, spectroscopy, and diffraction measurements. An x-ray detector containing conventional photocathodes has a limited quantum efficiency (how well it converts photons to electrons), as the escape depth for secondary electrons from the most efficient photocathode materials is only a few tens of nanometers. The development team broke this longstanding barrier by creating photocathodes with an innovative pyramid array configuration. The new design increases the surface area of the photocathode’s exit face compared to its input face, resulting in a quantum efficiency three times that of traditional photocathodes at 7.5 kiloelectronvolts.

The geometrically enhanced photocathodes are adaptable to any x-ray detector, allowing for ease of use without compromising performance parameters such as spatial and temporal resolution. The new technology stands to revolutionize the design of photocathodes for x-ray streak cameras, extending the cameras’ application to new regions of the electromagnetic spectrum. The advance also supports several Livermore core competencies, including nuclear science. 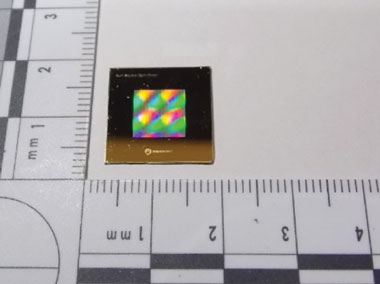 content/pages/past-issues-pdfs/2010.12.pdf
The geometrically enhanced photocathode, which can be adapted to any x-ray detector, uses an innovative pyramid array configuration to increase the measured total electron yield up to three times over that of traditional x-ray photocathodes at 7.5 kiloelectronvolts.

ACE exhibits high castability—a measurement of how well the alloy can fill a mold without defects—and costs less to manufacture compared to other competitive alloys. In addition, it does not require heat treatment or “preconditioning” to impart properties such as hardness. “ACE is ideal for high-temperature applications, such as pistons in high-performance gasoline and diesel engines and new, lighter rotors for rotary engines,” explains McCall. At operating temperatures of 200°C, ACE’s yield strength is 220 percent that of the more expensive aluminum 2618 alloy, which is typically used in high-performance pistons in race cars. If ACE replaced traditional aluminum in pistons and cylinder heads, users could run engines at higher temperatures, increasing combustion and operational efficiencies. Also, ACE’s inherent high strength allows complex net shape parts to be cast that would normally be susceptible to warping during traditional thermal processing or heat treatments. 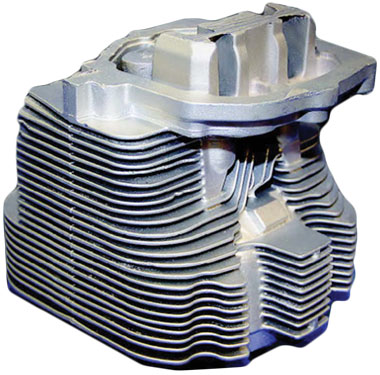 The aluminum–cerium (ACE) “superalloy” is a major departure from aluminum alloy compositions developed over the last century. Components made from ACE could allow engines to run at higher temperatures, increasing combustion and operational efficiencies.

Researchers from Los Alamos and Lawrence Livermore national laboratories worked with testing partner H2 Frontier, Inc., to develop a hydrogen safety sensor and demonstrate its efficacy for real-life applications, which includes meeting necessary performance and safety standards. This sensor, which earned the team a 2017 R&D 100 Award, paves the way for ensuring the safety of vehicles powered by hydrogen-based fuel cells, making hydrogen filling stations as safe as conventional gasoline stations. The work was done in support of the Laboratory’s efforts to reduce the environmental impact associated with the nation’s energy use.

Vehicles powered by hydrogen-based fuel cells combine the performance of electric vehicles with the driving range and fueling time of conventional fossil fuel–powered vehicles. Until recently, a principal drawback of these cells has been hydrogen’s perceived safety risks—it disperses quickly when released into the air and is highly flammable, colorless, and odorless. The advanced hydrogen safety sensor addresses this concern with a technology that is both simple and inexpensive. It also meets more of DOE’s performance targets than all other commercial platforms for sensitivity, selectivity, response time, stability, and insensitivity to humidity and barometric pressure, while operating under an extreme range of ambient temperatures.

The solid-state, electrochemical hydrogen safety sensor is built on a zirconium oxide-based platform with electrodes containing a tin-doped indium oxide (ITO) film and another film made of dense platinum. Livermore chemist Bob Glass, now retired, identified the benefits of using ITO as an electrode over a decade ago. Based on this research, ITO became an excellent candidate for the sensor because the material is fairly unresponsive to water vapor, allowing the sensor to be used in humid environments. 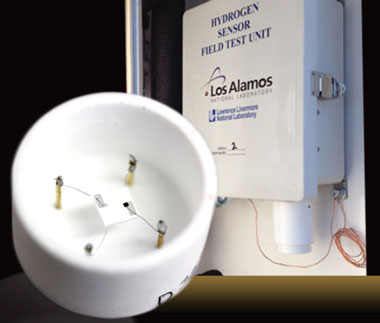 This simple and inexpensive solid-state, electrochemical hydrogen safety sensor was tested at a hydrogen fueling station run by H2 Frontier, Inc. The device meets more of the Department of Energy’s performance targets than all other commercial platforms, while operating under an extreme range of ambient temperatures.

Livermore materials scientist Amanda Wu, project lead for the Livermore work, and the development team have spent the last several years testing their new sensor technology. Says Wu, “The point of field trials is to demonstrate the ability of our sensors to detect hydrogen consistently and reliably.” A complete prototype sensor unit was installed at one of H2 Frontier’s hydrogen stations to analyze the device’s overall performance and effectiveness. The new sensors can be placed anywhere in the hydrogen supply chain for hydrogen production and distribution, and as a critical component in filling stations and in hydrogen-powered vehicles such as cars, buses, trucks, fork lifts, and even submarines.

The use of fossil energy resources is expected to extend decades into the future to meet demands for affordable energy and drive economic development. Reducing carbon emissions from such resources requires capturing and storing large amounts of CO2. Geologic formations deep underground are promising as repositories for storing this gas byproduct. However, geologic systems are inherently variable and often poorly characterized, making it difficult to know with certainty how a system will respond to large-scale injection and storage of CO2. 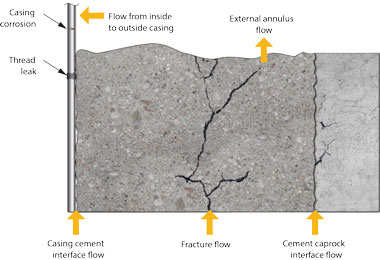 In response to this challenge, a multilaboratory team developed a suite of computational tools to inform decision making for CO2 sequestration sites. The DOE NRAP Toolset was developed by the National Energy Technology Laboratory in collaboration with Lawrence Livermore, Los Alamos, Lawrence Berkeley, and Pacific Northwest national laboratories. The Livermore team includes Susan Carroll, Joshua White, Yunwei Sun, Harris Mason, Wyatt Dufrane, Yue Hao, Stuart Walsh, and Kayyum Monsoor. The easy-to-use toolset combines 10 science-based prediction and design tools for assessing the geological integrity and environmental risk related to potential fluid leaks and ground motion at possible storage sites. Carroll says, “Livermore provided the scientific base for risks to induced seismicity, well integrity, and groundwater quality. We also developed a reduced order model to help assess impacts to drinking water aquifers.” The NRAP Toolset can be downloaded for free and is currently being used for projects around the globe, including in Asia and Australia.