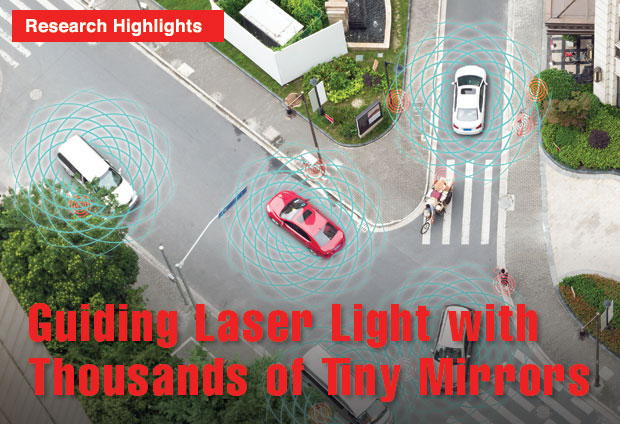 An array of thousands of constantly moving hexagonal mirrors, each measuring just 1 millimeter square, could one day enable a host of cutting-edge applications, from self-driving cars and laser-based communication and manufacturing to advanced microscopes and telescopes. The Livermore micromirror array delivers an unprecedented combination of capabilities, including tight control of every mirror’s three degrees of freedom—tip, tilt, and piston (up-and-down) motions. The result is significant improvement in the speed and precision with which the mirrors reflect and guide light.

Livermore engineer Bob Panas is principal investigator of the Light-field Directing Array Program, which developed the micromirrors. Panas explains, “This technology, which excels at controlling and directing light, is based on microscale structures for controlling arrays of miniature mirrors. This approach promises motion that is faster, greater in range, and more accurate than technologies currently on the market can deliver. New technologies like ours are needed to replace slow, expensive, and bulky conventional instruments.”

Initially funded by the Laboratory Directed Research and Development Program, the micromirror array has sparked interest from U.S. firms seeking lidar (light detection and ranging) products for self-driving cars and from the Department of Defense, which is funding further development of the technology. Panas’s team of seven engineers is producing an early prototype array of seven micromirrors for advanced testing and demonstration.

The development effort includes contributions from Jonathan Hopkins, assistant professor of mechanical and aerospace engineering at the University of California at Los Angeles and his colleagues, along with experts from A. M. Fitzgerald & Associates, a microelectromechanical system (MEMS) microfabrication consulting firm based in Burlingame, California. The array also takes advantage of resident Livermore expertise in advanced micromanufacturing capabilities, including additive manufacturing. The array, a MEMS application that consists of miniaturized mechanical and electromechanical components measured on the micrometer scale, is the culmination of a decade of research at Livermore exploring new applications for MEMS and better ways to fabricate the devices.

Livermore’s design for a micromirror array comprises upwards of 10,000 hexagonal-element arrays, each measuring 1 millimeter square. The images show (left) a single fabricated mirror and (right) three microflextures printed on the underside of a micromirror, awaiting attachment to a paddle.

The Laboratory team’s patented design offers dramatically enhanced performance compared to existing light-guiding technologies—approximately 100 times greater than other tip–tilt mirror array designs, as measured by the speed and range of the mirrors. Panas envisions upwards of 10,000 hexagonal-element arrays, each measuring 1 millimeter square and together covering a roughly 10-centimeter-square surface. Moving in unison, the tiny mirrors will operate like a single, large reflective device, with each mirror controlled independently to create the exact configuration needed. Fast and precise motion control achieves the exact tip, tilt, and pistonlike movements required. Each mirror can tip or tilt up to 10 degrees and move up or down as much as 30 micrometers in either direction. Moreover, each mirror can perform up to 40,000 fine angle adjustments per second. With this degree of control, light can be reflected in any desired direction. The array can even split the outgoing beams in different directions to map large areas in parallel, or quickly focus on any object of interest.

The array is composed of identical miniaturized hexagonal units, each consisting of a mirror, three microscopic decoupling flexures, and three two-layer actuator paddles. These components are fabricated at Livermore with a combination of microfabrication, microassembly, and new micro-additive manufacturing techniques. The mirrors and paddles are fabricated in a manner similar to integrated circuits, whereas the microflexures are 3D printed.

To fabricate the mirrors, a silicon wafer is cut into hexagonal pieces and coated to reflect incoming light. The development team chose a hexagonal shape to achieve a 99 percent fill factor, that is, the ratio of mirror surface area to total device surface area. Panas explains, “We don’t want the device to absorb laser light. The higher the fill factor, the more light is reflected, reducing the possibility that a high-intensity incoming beam could damage the array.” Hexagons strike an ideal balance between dynamics and pattern fill, despite being relatively uncommon in other designs. A circle would be the optimal geometry for a tip–tilt mirror from the standpoint of balanced mass moments of inertia but would greatly reduce the fill factor.

The microflexures—measuring just micrometers in diameter but playing an outsized role in the Livermore array design—are manufactured with techniques developed by Livermore’s micro-additive manufacturing group. Panas states, “Our microflexure design couldn’t be fabricated with any other method.” The three paddles that precisely move a mirror are connected to the mirror by a unique microflexure designed to operate at the extremely high loads experienced during rapid motions. Panas explains, “Nearly all other designs currently available are under-constrained, that is, free to vibrate at certain frequencies, which strongly limits their speed and accuracy. However, we get vastly improved performance with our design by utilizing exact-constraint principles.”

Each paddle is composed of two microfabricated silicon wafers. The actuator plate and the base plate (also known as the via plate) are aligned and then fused together. Electrically charged combs of the actuator plate mesh and overlap with combs of the base plate, and six holes punched in the base plate permit the passage of voltage and current. “This technology is one of the first micromirror arrays to demonstrate integrated closed-loop control,” declares Panas. “By measuring the capacitance in each paddle, we can determine where each mirror is without using an external sensor. If you know where the paddles are, you know where the mirrors are. This real-time feedback compensates for any unwanted motions. In contrast, open-loop mirror arrays inevitably suffer problems from manufacturing variations, temperature changes, and vibrations, which degrade precision.” With closed-loop control these problems are avoided by automatically adjusting the voltage delivered to any particular paddle, providing the ability to lock the device to the performance desired—even in a noisy, vibration-rich environment such as a moving vehicle. The array’s closed-loop control also provides a means to reject local disturbances and achieve the cleanest possible control for capturing clear telescopic images through atmospheric distortions.

Computer-aided design models show how the micromirrors are configured. (left) Seven mirrors fit together in a small array. (right) Sitting on the base plates (red), three actuator paddles (blue and green) precisely control the mirror (gray) by manipulating the flexures (gold).

The Livermore micromirrors make possible a host of new technologies and also promise to improve existing ones. Applications include secure laser communications on Earth and in space, including drone-to-drone communication for global Internet access. The large area of the array, combined with its high fill factor, make it possible to direct high-energy beams without damaging the array, a capability that could improve the uniformity of light coming off the meter-scale mirrors used in laser systems such as the National Ignition Facility.

The microarray’s attributes would be particularly useful in advancing the use of lasers in manufacturing, including additive manufacturing and micro- and nanomanufacturing. The array’s precision and bandwidth could stabilize optics and adjust for misalignment to assure performance in noisy, high-thermal-variation environments, making exotic, new optical technologies a reality simply, quickly, and cheaply. Finally, because each tiny mirror can be individually adjusted, the aggregate mirror assembly could be precisely curved to make it function as part of an extremely high-resolution telescope that would also be highly resistant to vibration, drift, or thermal expansion issues.

The most immediate application for the micromirror array may be reducing the size and cost of bulky lidar units. Lidar uses a pulsed laser to measure distances remotely and generate high-resolution maps. High-speed, focusable lidar is key to self-driving vehicles, but existing systems struggle to achieve high refresh rates (greater than 20 hertz). Current lidar approaches also continuously scan a vehicle’s entire surroundings, collecting massive amounts of data that may not be necessary to steering and other functions, and cannot focus on a specific object of interest. However, Livermore micromirror technology, capable of running up to 1,000 times faster and achieving much higher resolution, could locate and avoid objects sooner and farther away than conventional systems can, allowing a vehicle’s autonomous controls to respond to road conditions sooner. Panas explains, “Instead of constant scanning where very little of the data are useful, the system can spend more time focused on items of interest and collect far more information of value.” With its small size, the Livermore micromirror array could be integrated into a vehicle’s taillights and other unobtrusive locations, for 360-degree coverage. Panas has been in discussions with lidar device manufacturers who are interested in licensing the Livermore technology. 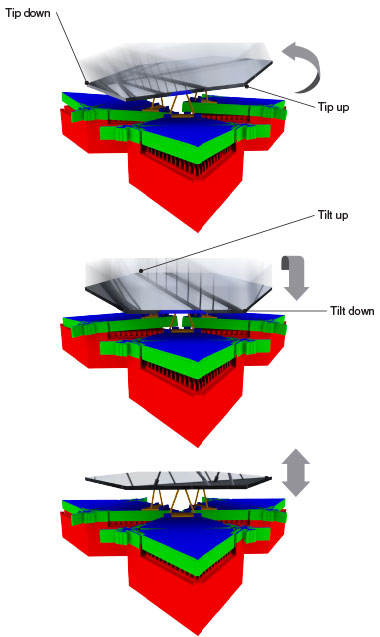 Each mirror is capable of extremely precise motions in three degrees of freedom—tip, tilt, and piston (up and down).

Panas predicts his team will expand to meet rapidly growing interest in the Livermore technology and its many potential applications. Thousands of precise micromirrors acting in unison may one day be central to everything from self-driving cars to new manufacturing technologies.