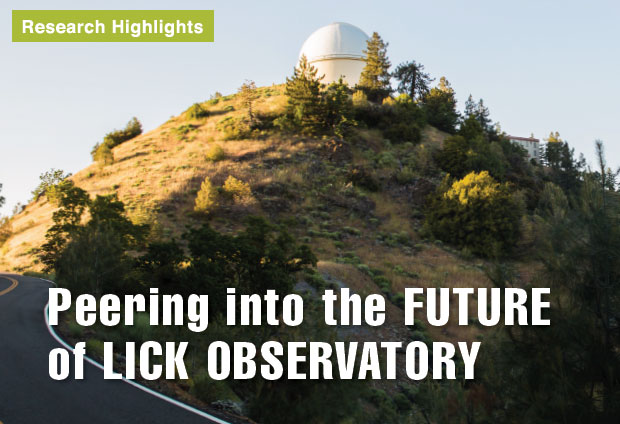 Peering into the Future of Lick Observatory

Since 1888, the University of California’s (UC’s) Lick Observatory—built on the summit of Mount Hamilton near San Jose, California—has been the site of important astronomical breakthroughs. Notable contributions include the discovery of numerous extrasolar planets around other stars and measuring the redshift of distant supernovae to understand the universe’s accelerating expansion. In addition to Lick’s research mission, the observatory serves as a training ground for young scientists and as UC’s main test bed for developing new instruments and technologies for optical astronomy—for instance, the novel adaptive-optics-based laser guide star, which was created with help from Livermore scientists. (See S&TR, June 2002, Adaptive Optics Sharpen the View from Earth.) Approximately 35,000 adults and children visit Mount Hamilton every year to participate in education and outreach programs.

In 2013, UC’s future funding for Lick, the world’s first modern mountaintop observatory, came into question. To support decision makers during that time, the UC Office of the President (UCOP) and UC Observatories (UCO) investigated the cost of different operating options for Lick’s facilities. As part of this effort, UC’s provost and UC at Santa Cruz professor Sandra Faber (then the Interim Director of UCO) turned to Lawrence Livermore scientists who were experts at enterprise modeling—a tool for projecting how funding influences the future health of an organization’s infrastructure, assets, and resources over time.

The Laboratory’s weapons program had pioneered an enterprise modeling tool to support funding decisions for the National Nuclear Security Administration (NNSA) and Lawrence Livermore. (See S&TR, October/November 2013, Enterprise Modeling Leads to Smarter Decisions.) Armed with this tool, the Livermore–UCO team, led by Laboratory physicist Cliff Shang, created the first-ever, time-dependent lifecycle model of an observatory. The model considered the effects of different funding levels on Lick’s operations given the condition of the on-site facilities and helped inform UC’s decision on future funding for the observatory’s services.

While considering options for Lick’s future, decision makers had to comply with the terms of the original 1876 bequest from philanthropist James Lick, which stated that he would donate funds to UC for building the Lick Observatory if the facility would be used for both research and public education. Shang notes, “The bequest aligns with UC’s historic mission and was at the forefront of deliberations on the observatory’s future.”

At the request of UCO stakeholders, Livermore’s Lick enterprise model calculated three options for operating the observatory: sustaining only the assets needed for public outreach and education and keeping two low-cost, robotic telescopes open for research to comply with Lick’s bequest; sustaining only those assets needed for research; or sustaining current assets for serving both public education efforts and research.

A large and complex site, the Lick Observatory infrastructure includes nearly 15,000 square meters within 64 buildings, worth approximately $60 million, not including the scientific equipment. The Lick enterprise model incorporated facility data, such as building type, age, size, condition, utilization, value, and current operational status. The model was then calibrated to cost (labor, materials, equipment rental, and utilities) and climate considerations for the San Jose area. “This project required very detailed modeling,” says Livermore computer scientist Lisa Clowdus. “We had to be sure every facet was correct, from physical building elements to weathering effects on infrastructure.”

The enterprise model calculates the operations, maintenance, and repair costs at Lick Observatory. These factors can be adjusted to simulate the site’s operations at different funding levels. With these results, UCOP was able to estimate infrastructure costs over time. The model’s decision-analysis tools ultimately enabled decision makers to compare the cost–benefit trade-offs of various alternative approaches to managing the facility’s lifecycle from acquisition to demolition. 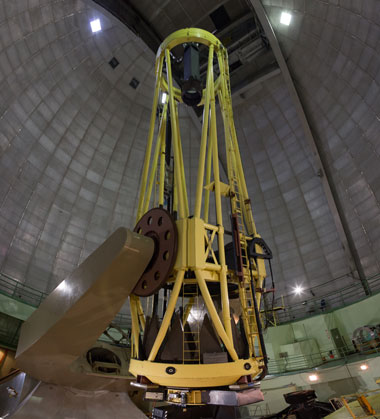 Lick Observatory’s 3-meter Shane telescope has been used for testing many new instruments for astronomy research, including the novel adaptive-optics-based laser guide star—developed with help from Livermore scientists. (Photo by Lanie L. Rivera.)

Although the Livermore team’s past experience with modeling the nuclear weapons complex provided an excellent foundation for this more recent work, simulating Lick Observatory facilities posed many unique challenges. “This new brand of modeling involves many fields of expertise, including real-property experts, modeling and simulation specialists, computer scientists, and astrophysicists,” says Bernie Mattimore, Livermore’s former associate director for plant engineering, who provided facilities expertise for the Lick modeling effort. The site is remote, at an elevation of nearly 1,300 meters. Its hard-to-reach location and changing weather conditions complicate maintenance operations and costs. Further, Lick’s unique facilities have widely different utility needs. In contrast with its residential buildings and visitor’s center, the domed-shaped research facilities—where most activity occurs at night with a small staff—do not use heat, ventilation, or air-conditioning systems.

The model indicated that Lick’s funding for infrastructure, maintenance, and repair needed to double just to maintain current facility conditions. “Because of budget constraints, Lick had a ‘repair it as it breaks’ maintenance approach,” says Clowdus. Without proper preventive and corrective maintenance, systems have a shorter service life and an increased risk of failure. The model made it clear that if operations, maintenance, and repairs remained underfunded, it would have a significant negative effect on facility and system conditions, thus increasing future operating costs.

When comparing the options of reducing Lick Observatory’s scope of operations to either serving public education efforts or research, the model revealed that the cost savings of choosing one mission area over the other was marginal. Mattimore notes, “If either service were cut, great scientific and educational contributions would have been lost for little financial gain.” 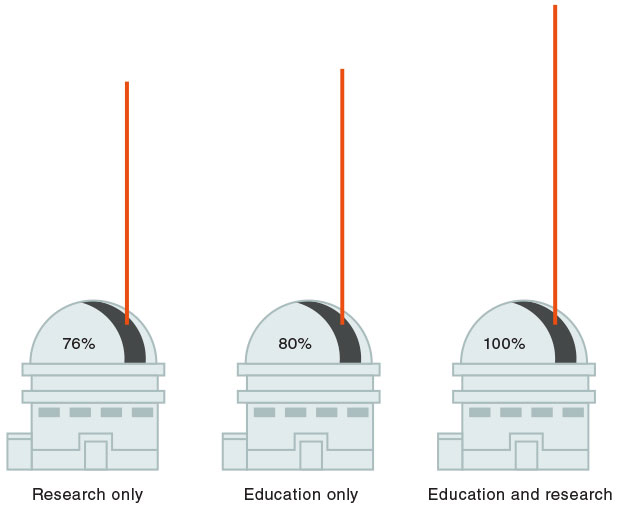 The enterprise model for Lick Observatory revealed that funding one mission area (research or education) rather than both resulted in marginal cost savings. As depicted in the graphic shown here, while sustaining both education and research was the most expensive option—requiring 100 percent of allowable funds—maintaining research or education alone would have cost only 24 or 20 percent less, respectively. 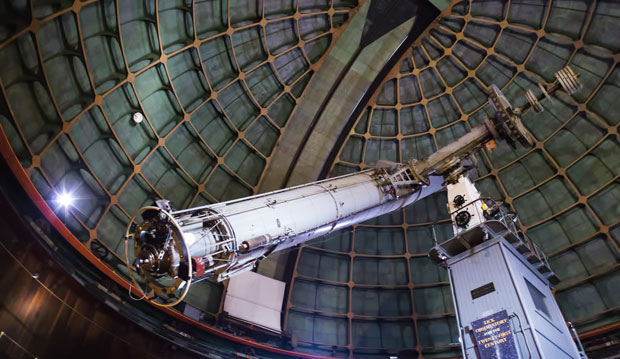 The Great Lick Refractor, a type of telescope that uses a lens to form an image, is 17.3 meters long, 1.2 meters in diameter, and weighs over 12.5 tons. Among today’s refracting telescopes, it is second in size only to the refractor at the University of Chicago’s Yerkes Observatory in Williams Bay, Wisconsin. (Photo by Lanie L. Rivera.)

With the Livermore modeling results in hand, UCO and UC senior staff had a more quantitative understanding of Lick’s maintenance needs and ultimately decided to sustain Lick at full operation with increased financial support from UCOP. In a letter to the Livermore contributors, the project’s sponsors from the UC provost’s office acknowledged, “Finding a team with the right expertise and knowledge of UC, who could take a fresh and rigorous look at the facilities on [Mount] Hamilton, has proven invaluable…We now have a common understanding about the costs and ongoing challenges to operating and maintaining these facilities according to industry-based standards.”

Claire Max, former Livermore astrophysicist and UCO’s director since 2015, notes that this effort proved beneficial for both the site and her position at the observatory. She says, “This project was a great learning experience for me, and it continues to provide a guide for needed site maintenance and expenses.” The model data also help Lick explore private or corporate financing, as potential contributors have a more concrete idea of what their donations can accomplish.

With the success of the Lick Observatory project, Livermore has begun applying enterprise modeling to new scenarios. For example, the Laboratory Strategic Infrastructure group, led by Shang, is currently collaborating with NNSA and the U.S. Army Corps of Engineers to accurately model the nuclear weapons complex. Such models are highlighting the significance of sound infrastructure for accomplishing mission objectives. At Livermore, infrastructure is the most expensive investment, followed by stockpile stewardship, safeguards and security, and science and technology. “Many people don’t know how essential infrastructure is for meeting mission needs,” says Clowdus. “Our models provide evidence that our success depends upon reliable facilities and infrastructure.” As shown by the work with the Lick Observatory, the same holds true for research facilities outside the Laboratory.