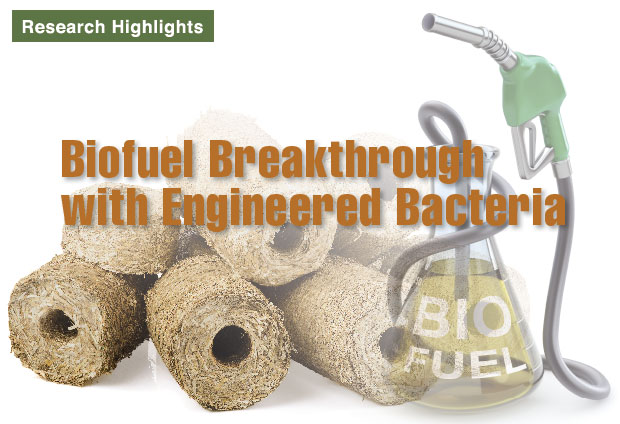 Whether used to fuel cars or power homes and businesses, fossil fuels are essential to almost every aspect of modern life. However, oil, natural gas, and coal deposits are millions of years old and are dwindling as new deposits form too slowly to meet demand. Another issue surrounding fossil fuels is that their widespread use over the past century has steadily increased atmospheric carbon dioxide. To address these challenges, scientists have begun researching alternatives to fossil fuels that are both renewable and environmentally friendly.

Biofuels are one such alternative under consideration. To make biofuels, biomass—organic plant matter such as lignin and cellulose—must be broken down into the sugars that bacteria can digest. The challenge is that cellulosic biomass is notoriously difficult to decompose, in part because lignin acts as a protective “shrink-wrap” for cellulose. Ionic liquids such as 1-ethyl-3-methylimidazolium are one of the few solvents that can pull apart lignin and cellulose polymers. “Some ionic liquids are potent solvents for extracting cellulose from biomass so that it can be broken down into sugars,” explains Livermore biochemist Michael Thelen. Unfortunately, a small percentage of the liquid remains bound to cellulose during its breakdown to sugars and, even at low residual levels, is toxic to biofuel-producing bacteria and yeast.

In research conducted at the Joint BioEnergy Institute (JBEI) in Emeryville, California, a Livermore team led by Thelen has discovered a gene that enables bacteria to survive in the hostile environment of an ionic-liquid solvent, thus overcoming a major bottleneck to efficient biofuel production. Notes Thelen, “Growing demand for energy and finite availability of oil and gas motivates the serious consideration of alternatives. Lignocellulose biomass feedstock offers the best substitute as a sustainable and renewable fuel source.”

The first step in biofuel production is to break down biomass—organic plant matter such as lignin and cellulose—into sugars. Ionic liquids, such as 1-ethyl-3-methylimidazolium, are potent solvents that solubilize organic matter and separate it into fragments to be further broken down with enzymes into sugars. Engineered bacteria then use these sugars to create biofuel. (Rendering by Ryan Chen.)

The intestinal bacterium Escherichia coli and brewers yeast are the two most widely used microbes for producing biofuels because of their well-known genetics and biological pathways. One of JBEI’s objectives is to prepare plant biomass using ionic liquids and to engineer bacteria with novel pathways for producing biofuel. Because E. coli and yeast cannot tolerate residual ionic liquids in their sugary feedstock, the microbes must be engineered to process the solvents differently. “To overcome this problem, we have to look at other mechanisms in nature and then choose genes to design the best one for bacteria to create biofuels,” explains Thelen.

The team’s first step was to identify why ionic liquids are so toxic to E. coli and yeast. “We started out looking at two different microbial communities in nature that could possibly contain enzymes that break down biomass better than the standard bacteria used in lab experiments,” says Thelen. “We wanted enzymes that were thermotolerant and stable in high-salt environments.” They found such microbes in the rain forests of Puerto Rico, where bacteria help degrade leaves and plant matter on the forest floor. According to Thelen, similar bacteria can be found in green waste compost from commercial facilities.

The team performed various tests—including phenotypic growth assays, phospholipid fatty acid analysis, and RNA-sequencing techniques—to screen the rain forest microbes for molecular mechanisms that may sustain them in ionic-liquid media. “In nature, bacteria do not live in a vacuum but rather compete and cooperate with one another,” notes Thelen. “Understanding how they interact within an environment can help us apply their natural processes for other scientific purposes, including biofuel production.”

The researchers studied gene expression patterns in the soil bacterium Enterobacter lignolyticus, using a sequencing analysis technique known as transcriptomics. They found that ionic-liquid resistance was related to how bacteria direct substances through their membrane. Using sophisticated genomic tools in collaboration with the Department of Energy’s Joint Genome Institute (JGI), the researchers studied the molecular and physiological response of a strain of Enterobacter and looked at all the genes being activated when the bacteria were exposed to different levels of ionic liquids. They determined that E. lignolyticus could survive in much higher salt concentrations than the standard laboratory microbes. Delving further into the relevant metabolic biological pathways, the team analyzed which genes became more active (were upregulated) and which genes became less active (were downregulated) when the bacteria were coping with ionic liquids. Former Livermore postdoctoral researcher Jane Khudyakov found trends that pointed to survival mechanisms, including the upregulation of genes responsible for transporting small molecules across cell membranes. 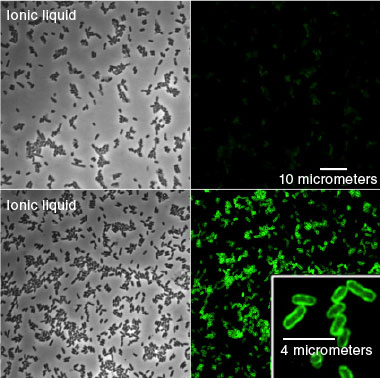 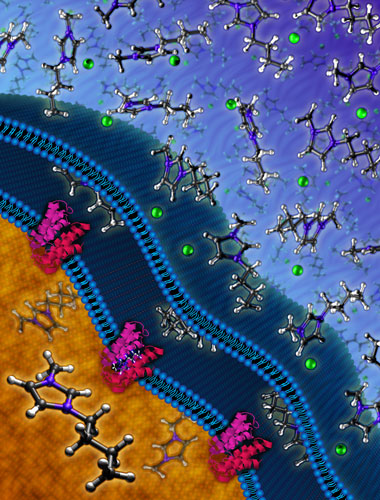 Ionic-liquid-tolerant microbes use efflux pumps to export ionic-liquid molecules from inside a cell, as interpreted by this artist’s rendering. The microbes use these protein structures (red and magenta) embedded in the inner cellular membrane (blue sheets of lipid bilayers) to help them grow in the presence of inhibitory concentrations of the ionic liquid 1-ethyl-3-methylimidazolium. (Rendering by Mona Aragon, Sandia National Laboratories.)

A Single Gene Holds the Key

The innate ability of E. lignolyticus to thrive in the presence of ionic liquids led the researchers to theorize that a complex mechanism involving potentially many genes was involved. To reveal the elusive mechanism, the team used an approach devised by Thelen’s graduate student Thomas Ruegg from Basel University, in which he examined E. lignolyticus DNA by comparing approximately 25 different DNA fragments, each of which has the same level of ionic-liquid tolerance when transferred to E. coli.

The team analyzed chunks of E. lignolyticus incorporating 30–50 kilobases of DNA to create a genomic library of the bacterium. In this process, DNA was extracted, cloned, and introduced into E. coli. “With this method, we can sample much larger bits of DNA,” explains Thelen. “If you take a long enough stretch of the DNA, it can represent a complete biochemical pathway that produces the response you are trying to identify.” The method enabled the researchers to see how and when the different genes were activated and how they influenced one another.

The researchers discovered two adjacent genes that were common to all of the genome fragments. “One of these genes matched an upregulated gene found in the transcriptome data that affects a membrane transport protein called a multidrug efflux pump. We concluded this pump must transport ionic liquid out of the cell interior, and that this single gene was sufficient to promote ionic-liquid tolerance in E. coli,” Thelen explains. The second gene corresponded to a regulator, or switch, that senses the level of ionic liquid and in response turns on and off the production of its neighboring pump gene.

After tests showed that E. coli had the same tolerance as E. lignolyticus, the team characterized the transporter and how it was regulated. Ruegg explains, “We verified that the transporter and regulator were indeed responsible for ionic-liquid tolerance. The regulator gene responds directly to external concentration of ionic liquid, adjusting the level of transporter needed to enable robust growth and biofuel production when the liquid is left in sugars from pretreated biomass.”

Using the newly engineered E. coli, the researchers efficiently produced the biofuel precursor bisabolene in laboratory-scale experiments, successfully demonstrating that ionic-liquid resistance can be engineered into fuel-producing bacteria. In addition, their work revealed that a bacterial regulator can be turned on and off, generating pumps only when the cells are exposed to ionic liquids and not before. As a result, cells can conserve their energy for other biological functions, including more rapid growth. Thelen and his team are exploring this switching mechanism as a way to control genes other than the pump, including the genes that trigger fuel production. 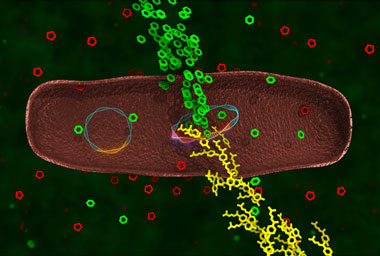 This rendering illustrates the rapid conversion of biomass-derived glucose to a chemical compound that bacteria would normally not synthesize. Inside the cell, a ring-shaped DNA plasmid (left) has the single gene to produce an efflux pump, enabling growth in the presence of toxic levels of ionic liquid (red pentagons). The other plasmid (right) contains enzyme-encoding genes to convert glucose (green hexagons) to the biofuel precursor bisabolene (yellow). (Rendering by Kwei-Yu Chu.)

The collaboration among Livermore, JGI, and JBEI demonstrates how partnerships can lead to great advances in areas that are important to the nation and to peoples’ everyday lives. “As a result of our study, we have shown that E. coli can grow in the presence of normally toxic levels of an ionic liquid, making it possible to produce biofuels more efficiently,” summarizes Thelen. “Our work paves the way for further improvements in the microbial conversion of biomass to biofuels. Such an advance is desperately needed to reduce our dependence on fossil fuels; create sustainable, home-grown energy resources; and ensure energy security for our nation.”

The team plans to focus on researching the metagenomic data from many different microbes to create a library with which they can further engineer bacteria for biofuels. With every advance in biofuel production, the nation takes another step toward energy independence with reduced environmental impact.