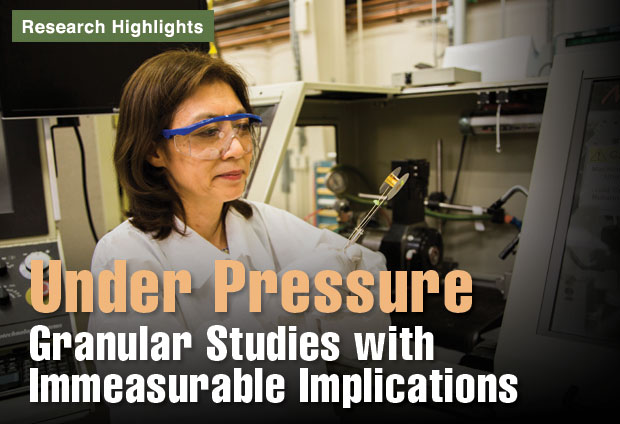 Livermore researcher Hye-Sook Park holds a gold hohlraum used in National Ignition Facility laser experiments to test the strength of tantalum at a previously unobtainable combination of pressure and strain rate. Similar hohlraums were used in experiments at the Omega Laser Facility to study the dependency of the metal’s grain size on its strength. The findings revealed that the grain size–strength relationship, thought to be universal as expressed by the Hall–Petch equation, broke down under the extreme conditions. This important finding has key ramifications in the Laboratory’s ongoing work related to the nation’s nuclear stockpile. (Photograph by Lanie L. Rivera.)

In the age-old practice of blacksmithing, a smith heats a piece of metal until it becomes malleable and then shapes it with a hammer, anvil, or other tool. What ancient practitioners of this art knew from experience we now know scientifically: Heating and pounding affect the metal at a microscopic level by changing the size of its grains and introducing defects into the crystal. Smaller grains have more surface area in contact with neighboring grains, and these grain boundaries impede plastic flow when force is applied. The strengthening of a material by changing its grain structure is described by the Hall–Petch equation, which specifies the relationship between grain size and strength.

Hall–Petch conventionally indicates that smaller grain size translates into stronger material, but Livermore researchers have recently found evidence that this relationship does not hold true in the domain of extremely high pressures and strain rates—pressures greater than 100 gigapascals (GPa), compared to pressure at Earth’s core of roughly 350 GPa, and strain rates of approximately 107 per second. In a series of 30 high-energy tantalum experiments conducted on samples of various grain sizes at the University of Rochester’s Omega Laser Facility, the researchers found the surprising result that grain size did not influence material strength in that extreme regime.

Lawrence Livermore has a longstanding need to understand materials at extreme conditions because of its mission in the science-based stewardship of the nation’s nuclear stockpile. Tantalum, the focus of the recent materials strength experiments, is a model body-centered-cubic, ductile metal that serves as an ideal test of scientific understanding of high-pressure material response, without the complexities of a phase transition. The material is also an area ripe for further research. “When our team found that little was known about materials’ strength under extreme conditions, we were motivated to explore this realm,” says Robert Rudd, who led the project’s multiscale modeling effort.

The Livermore materials strength tests were the first to be done in this regime, as they had been considered infeasible by many researchers. “The notion of being able to study grain-size effects was extraordinary,” explains Rudd, “because it requires such a high level of precision to accurately see changes in material deformation.” Creating this new capability required closely coordinated development of target components, diagnostic tools, and a Livermore multiscale strength model. “Preparation for the experiments demanded a long-term vision with many years of research and innovation,” states physicist Hye-Sook Park, who led the Livermore experimental team.

During the Omega experiments, 40 finely tuned laser beams simultaneously struck a 7-millimeter-long hohlraum, a gold cylinder with a hole at each end, thereby creating an “oven” of x-ray radiation inside. Positioned over a third hole in the hohlraum’s side was a 2-millimeter-thick physics package with a layered sample containing tantalum. The radiation heated the physics package, building pressure against the sample.

To deduce the strength of tantalum under applied pressure, the team measured the growth of pre-imposed sinusoidal ripples on the sample through a phenomenon called Rayleigh–Taylor instability. This instability occurs naturally when acceleration (pressure) is applied to a material interface that has different densities. When the material is strong, the ripples will grow, but their growth rate will be slower than that of a weaker material’s ripples. The amplitude of ripple growth was measured with face-on radiography, in which greater contrast from peak to valley indicates greater growth. A similar approach was also utilized for high-explosive experiments at Los Alamos National Laboratory and Nova laser experiments at Lawrence Livermore led by Bruce Remington.

Target fabrication was no simple task. Even state-of-the-art single-crystal diamond tools—such as a single-point diamond-turning lathe widely used to fabricate targets with high-precision features—do not work on tough tantalum because of the very high rate of tool edge wear the metal causes. Instead, materials scientist Kerri Blobaum and her team were tasked with adapting a coining or pressing technique—most notably used by the U.S. Mint to produce the nation’s metal coins—to shape the medium- and large-grained tantalum samples. Blobaum and her team found that steel, when coated with nitride, could be diamond turned with ripples to create a coining die, which in turn could precisely imprint the sample with the pattern. “Coining isn’t new, but doing it on the microscale and on tantalum is something Lawrence Livermore developed,” notes Blobaum.

Radiographs show Rayleigh–Taylor ripple growth in tantalum subjected to laser beams at three different delay times—40, 55, and 75 nanoseconds (left to right). The delay time is the time difference between when the laser drives the tantalum sample and when the backlighter beams turn on. The higher ripple contrast exhibited at later times represents how the ripples have grown, which is used to infer sample strength.

To See or Not to See

The team’s next hurdle was to develop a very bright backlighter diagnostic to capture high-spatial-resolution radiographs of the tantalum ripples. Park had spent several years optimizing backlighters to emit x rays with high enough energy to penetrate high-density tantalum, in conjunction with spatial resolution high enough to capture changes in the small (50- to 150-micrometer-wavelength) ripples. This backlighter capability was possible using lasers with very high intensity (1018 watts per square centimeter or greater), high energy (1,000 joules or greater), and short pulses (100 picoseconds or less), which can expel the inner-shell electrons from the target materials and then quickly refill them by emitting high-energy x rays.

The next task was to create a large-area uniform drive that reaches high pressure gently. In the new experimental design, the physics package is exposed to radiation, the heat of which vaporizes a layer of beryllium foil, driving a shock through a gap and releasing plasma. The plasma loses speed upon reaching the sample, but when it reaches the sample the plasma accumulates again, gradually increasing pressure to 130 GPa. 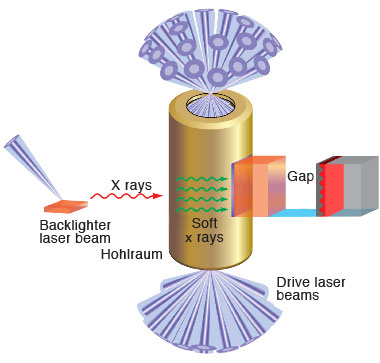 In tantalum material strength experiments at the Omega Laser Facility, radiation from the gold hohlraum drives energy in the form of plasma across the gap. This creates a ramped-plasma drive that compresses the sample material without generating a shock that would melt the sample. Ripple growth is measured by a high-resolution, high-energy backlighter from a 5-micrometer-thick silver backlighter target.

This pressure-building process, called laser-driven ramp compression, is used for high-pressure studies to avoid rapid heating, which can induce shock waves within the sample that will potentially melt and destroy its structure. (See A Laser Look inside Planets.) Raising the sample’s pressure more slowly keeps it from heating to extreme levels and melting, which would ruin the strength experiment. “Using this technique to create pressures of this magnitude with lasers is quite innovative for strength experiments,” explains Park. “Other researchers have not yet been able to do so, which explains why the validity of the Hall–Petch relation had not yet been tested at extreme conditions on different grain sizes.”

These new conditions enabled a pivotal discovery—that the inherent dislocations of a material heavily influence its strength, dwarfing contributions such as grain size (dictated by Hall–Petch) in extreme environments. This finding will have a broad effect on basic materials science theories and enable greater possibilities in Livermore’s experimental design, including the possibility—at the Laboratory’s National Ignition Facility (NIF)—of ramp-compressing a sample beyond 500 GPa without melting it.

A Model and Then Some

The Livermore multiscale strength model, which exhibits mechanical material behavior at different length scales, complemented the experimental work and helped the team gain a deeper understanding of materials at extreme conditions. At different levels, it describes fundamental stiffness, dislocations (line defects that determine a material’s strength under pressure), and the interaction of these dislocations, to calculate the macroscopic response. (See A "Grand" Way to Visualize Science.) Results from one modeling scale inform the next, from the atomic all the way to the macroscopic engineering level. 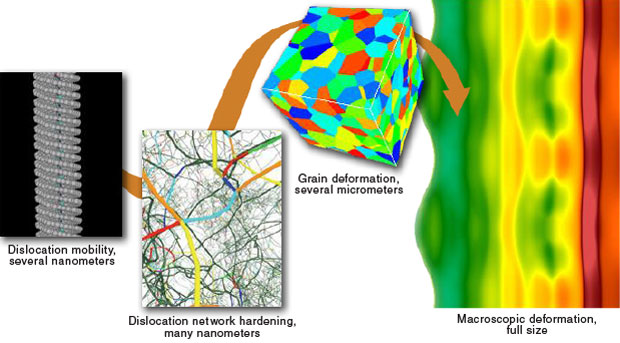 The Livermore multiscale model can be used to understand the factors that govern how the material deforms at various length scales, including polycrystal grain size, the spacing of dislocations in the network, and the separation of atoms around the dislocation cores. Information is passed from each level to the next higher one. The model complemented the experimental work and helped the team gain a deeper understanding of materials at extreme conditions, and when the backlighter beams turn on. The higher ripple contrast exhibited at later times represents how the ripples have grown, which is used to infer sample strength.

This comprehensive model depicts the material’s deformation patterns and plastic flow, but its initial formulation did not factor in grain size implications, which dissatisfied the scientific community, explains Rudd. In response, he extended the model, leveraging a grant of high-performance computing resources under Lawrence Livermore’s Computing Grand Challenge Program. (See Science on a Grand Scale.) Rudd adds, “Understanding the physics of why the grain size shouldn’t matter at these extreme conditions, together with the compelling evidence from highly refined experiments, moved our work beyond speculation to scientifically robust results.” The new insight will benefit future tests on the relationship between grain size and strength at extreme conditions using other materials, such as lead. As Lawrence Livermore researchers grapple with the impact of the new results, they will continue to probe the limits of Hall–Petch, extending studies into nearby regimes—and more extreme conditions—to understand the full scope of this discovery.

These ultrahigh-pressure and ultrahigh-strain-rate experiments exemplify how such experimental endeavors often require long-term goals and investments. “Development of these sophisticated experimental and modeling techniques took in excess of a decade’s time, and at the end of that extended effort, to discover new, unexpected material behaviors is game changing,” declares Rudd.

Because Omega’s pressure-generating potential is capped at 130 GPa, tantalum pressure experiments have transitioned to NIF, where intense energy levels will allow experiments to achieve well beyond 500 to 800 GPa—pressures never before reached in strength experiments. These experiments are fielding some of the largest hohlraums ever used at NIF. “We are eager to see what scientific surprises we encounter,” says Park. “An array of new studies enabled by NIF’s enormous energy capacity will likely reveal unexpected material properties.” The frontier of tantalum and other materials important to Lawrence Livermore’s research for the nation is certain to expand further.