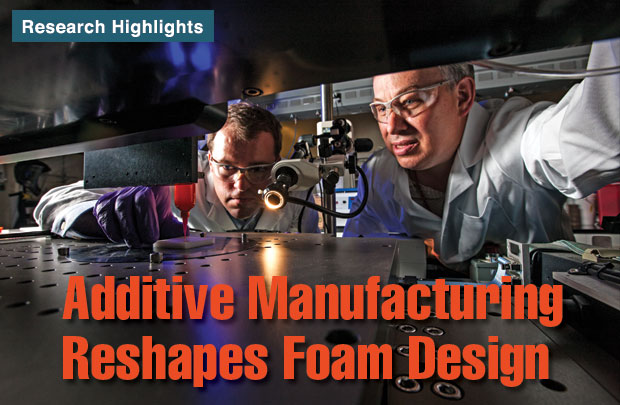 Over time, high radiation fields, temperature swings, and other environmental factors can cause the foam parts inside nuclear weapons to lose their resiliency and shrink. These foams, which absorb shocks and fill gaps between components, must then be replaced during weapons maintenance and refurbishment activities conducted under life-extension programs (LEPs). (See S&TR, March 2012, Extending the Life of an Aging Weapon; July/August 2010, Enhancing Confidence in the Nation’s Nuclear Stockpile.) The Laboratory’s production counterpart, the National Nuclear Security Administration’s Kansas City National Security Complex, produces the durable silicone-based cellular foams used in Livermore-led LEPs and ensures that these foams meet the chemical, structural, and mechanical standards established for weapon components.

Foams are by nature disordered materials studded with air pockets of varying sizes. As such, a manufacturer’s lack of control over the material’s architecture at the micro- or nanometer scale can make it difficult to tailor a foam’s properties. The material response of cellular silicone foams can be adjusted during the manufacturing process by modifying the foam formula or the spacing and concentration of air pockets. However, the response range is limited, and the process is imprecise. Some fabrication steps may also prevent the foam from achieving optimal mechanical properties. In particular, the additive used to form air pockets can prevent the foam from curing thoroughly.

To improve the performance and durability of these crucial components, Livermore weapons engineers and materials scientists, together with their Kansas City partners, are using additive manufacturing (AM) to develop an engineered “foam” with a more controlled structure and tailored properties. (See S&TR, March 2012, Materials by Design.) Additive manufacturing builds structures and components layer by layer from the bottom up, guided by a three-dimensional computer model. First developed in the 1970s, the AM technique has been adopted more widely in recent years thanks to advances in materials, sensors, micromechanics, computational modeling, and simulation. A precise yet flexible method, AM allows researchers and technicians to customize a foam’s microstructure and behavior and engineer foams with novel combinations of properties, such as being stretchy at one end and stiff at the other.

Foams are, by nature, disordered materials studded with air pockets of varying sizes. Lack of control over the material’s architecture at the micrometer or nanometer scale can make it difficult to adjust the foam’s basic properties.

Livermore’s efforts to redesign foam cushions for nuclear weapons began in 2011. Tom Wilson, a chemical engineer and weapons expert in the Laboratory’s Physical and Life Sciences Directorate, approached AM specialists Chris Spadaccini and Eric Duoss in Engineering about applying a technique called direct ink writing (DIW) to foam cushion fabrication. DIW uses micro- or nanometer-scale nozzles to deposit, or print, a fine stream of material, often referred to as ink, onto a substrate in a predetermined pattern, similar to toothpaste being extruded from a tube. As the ink is deposited, it quickly solidifies, leaving spaces inside the printed part. Heat or ultraviolet light then cures the ink, linking the interfaces chemically and enhancing the material’s strength and cohesion.

Intrigued by the concept, Spadaccini and Duoss developed a DIW-printed prototype made with ultraviolet-cured silicone ink. The engineered foam worked well for about six weeks but then became brittle and crumbled. The effort might have ended there but for the collaborators’ perseverance. A heat-cured, silicone-based commercial ink they eventually found produced an engineered foam that was similar in composition to cellular silicone foams and met or exceeded all the performance specifications.

As the researchers experimented with the second-generation ink, interest in this AM application grew at both Lawrence Livermore and Kansas City. Bob Maxwell, who leads the Chemical Sciences Division in Physical and Life Sciences, was an early proponent. “One problem with the traditional way of making foam is that it can take a year or longer to create an effective new formulation,” he says. “With additive manufacturing, we can change the properties in hours and develop a candidate material in days, not years. Mistakes, redesigns, and experiments no longer represent a sizable expenditure of effort.”

DIW foam production could offer significant advantages over conventional methods. Fabricating the minimum 45-kilogram batch of the current cellular silicone foam takes six weeks. With AM, parts can be fabricated on demand, rather than in large lots, within hours or days. Setup time is also minimal. “With additive manufacturing, we can print one density or pattern of structure in the morning and a different one in the afternoon,” says Wilson. “That’s harder to do with cellular foam.”

The equipment is also compact and flexible. The Laboratory’s partners in Kansas City estimate that switching to AM would allow them to shrink production facilities from 1,000 square meters to less than 50. More importantly, AM printers can create part shapes, microstructure patterns, and feature sizes that conventional manufacturing techniques cannot achieve. For instance, some Livermore-designed DIW foams have features only 150 micrometers in diameter—finer than those in cellular silicone foams. 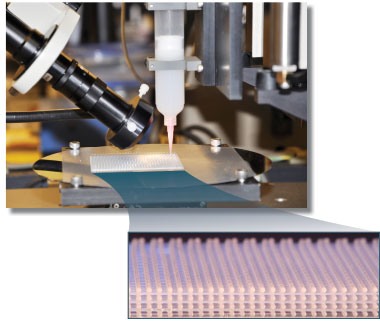 (top) Livermore’s three-axis AM printer uses direct ink writing to print a foam material. The AM process provides more control over the shape and properties of the fabricated object (inset) than conventional manufacturing methods.

The Livermore team is using experiments and modeling to characterize the foam’s properties and confirm that DIW foam is suitable for stockpile stewardship applications. Results to date indicate that engineered foams display superior structural uniformity to conventional foams, both within a part and between parts. At strain rates relevant to weapon cushioning, engineered foams demonstrate desirable and consistent load responses, a measurement of how the material bounces back when twisted, sheared, or squeezed. “These results are encouraging,” says Duoss. “We think we can shrink the ranges of acceptable properties for weapons cushions and create more reliable, uniform, and useful foams. Our success will depend on our ability to understand and accurately predict the material’s behavior.”

To determine how the microstructure of engineered foams affects material response, the team designed and printed samples with a uniform density but different crystal lattice structures. One sample featured a stacked pattern that repeats every two layers. The other had a staggered configuration that repeats every four layers. The team then examined each sample using in situ synchrotron radiation microtomography to track material response to applied stress. As expected, the two designs behaved differently. The stacked structure became unstable and buckled under compressive loading, while the staggered structure displayed little lateral deformation.

The researchers evaluated both designs by creating finite-element models with NIKE3D, an implicit solver developed at Livermore. The simulations predicted that the stacked structure would experience higher compressive stress than the staggered structure for a given strain—findings that were consistent with observed behavior. In addition, when the stacked structure is compressed, the simulated load is carried in columnar paths that are initially stiff but inherently unstable. The staggered component demonstrated a more distributed load path under compression, giving it a softer response.

That the researchers could accurately predict and study foam behavior through modeling is itself a notable achievement. The greater variability in structure and properties that characterize conventional foams often hindered predictive modeling and forced experts to incorporate a level of uncertainty into stockpile models. The team’s modeling efforts will not only benefit foam development in the near term but should also contribute to future stockpile stewardship analysis and certification efforts. 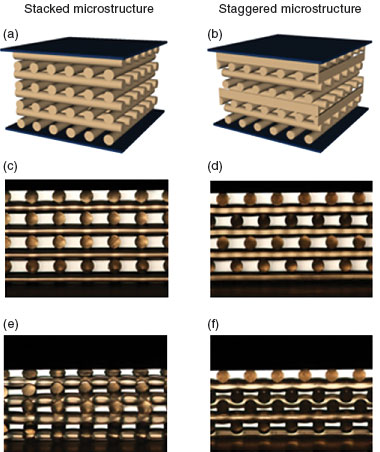 With AM, designers can control the microarchitecture of a material, engineering foams with specific and uniform mechanical responses. A Livermore team evaluated sample weapons cushions with two crystal lattice structures: (a, c) stacked and (b, d) staggered. The two structures had significantly different responses under uniaxial compression of (e, f) 25 percent.

Engineered DIW foams show great promise for replacing cellular silicone foams, but several milestones remain before such parts can be incorporated into a weapon. In the project’s early stages, the Livermore team used a three-axis positioning system to print foams with simple shapes just a few centimeters in diameter. In 2014, researchers began working with a six-axis printer to produce three-dimensional foam structures 15 centimeters in diameter.

The team is transferring the process to a five-axis printer at Kansas City. Some printed cushioning and spacing components could be far larger—up to 36 centimeters in diameter and 18 centimeters high—and have more complex shapes. For LEP applications, the printer must quickly print parts that precisely match the shape of the current cushions in a designated warhead. A 15-centimeter-diameter sample with a 250-micrometer feature size currently takes several hours to print. Ultimately, complete parts must be produced in 12 to 24 hours to meet anticipated production demands.

In addition, the Livermore–Kansas City team must certify the AM parts through testing and modeling. All warhead components, even foams, are expected to remain functional under the extreme conditions inside a nuclear weapon for 30 to 50 years. Foams must undergo a series of certification tests to gauge their long-term mechanical response and chemical compatibility with other weapon components. Modeling allows the team to accelerate aspects of the certification process without sacrificing accuracy.

As part of the testing, parts are subjected to cyclical or sustained loads while being bombarded with radiation, heat, or both to simulate the effects of material aging. At certain intervals, researchers measure a component’s properties and compare the results to those of unaged samples. Critical parameters for weapons cushions include load retention—how well a foam retains its shape under loading—and compression set—how much the foam springs back after a load is removed. Certification also entails searching for chemical incompatibilities in the different materials used in a warhead and confirming through modeling and analysis that the foams will not impede weapon performance. Studies are ongoing, and Livermore engineers are confident the new cushions will eventually meet all mission specifications. 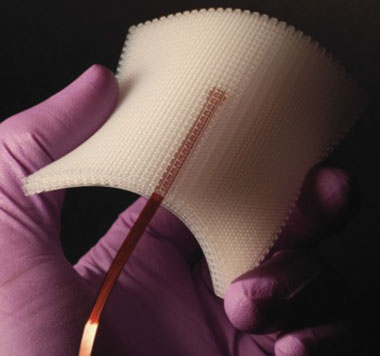 A Pattern for Success

Laboratory researchers are exploring ideas to enhance engineered foams. For example, they are developing an ink that will meet performance requirements over a broader temperature range than is possible with the commercial ink currently used. The custom ink will allow them to modify a foam’s tensile behavior by adjusting the ink formula. They are also evaluating the usefulness of foam structures designed with directionally dependent or regionally specific properties. “Having different tensile or shear properties within the same component is a remarkable and unprecedented level of material property control at those scales,” says Maxwell. He notes that industrial companies are also interested in licensing and customizing the Livermore materials for commercial applications.

Another effort involves embedded sensors, which can be placed in a foam during printing and chemically bonded to it during curing. Installing engineered foam with embedded sensors during an LEP would allow weapons experts to continually monitor the foam’s material properties and the weapon’s overall condition, or “health,” as it ages. Preliminary stress testing indicates that results delivered by embedded sensors in AM foams are 10 times more consistent than those produced by cellular foam sensors. Livermore researchers attribute this improvement to the sensor’s secure positioning within the foam and the foam’s structural uniformity, features that help them calibrate the sensor and accurately determine the load response. The team is also investigating whether these measurement capabilities could be integrated into the foam structure itself, thereby eliminating the sensor’s extra weight and bulk.

Flexible, stretchable AM foams with designed mechanical properties are the newest chapter in the Laboratory’s history of developing novel materials for diverse applications. Aided by a multidisciplinary approach that integrates precision engineering and manufacturing expertise, materials science research, and high-performance computing, Lawrence Livermore has emerged as an AM leader among Department of Energy laboratories. Advances in AM technology may eventually be applied to such areas as aerospace, national security, consumer electronics, energy, and even sporting goods. “This research is bigger than just polymer materials,” says Duoss. “We’ve helped shape the Laboratory’s overall direction with additive manufacturing.”