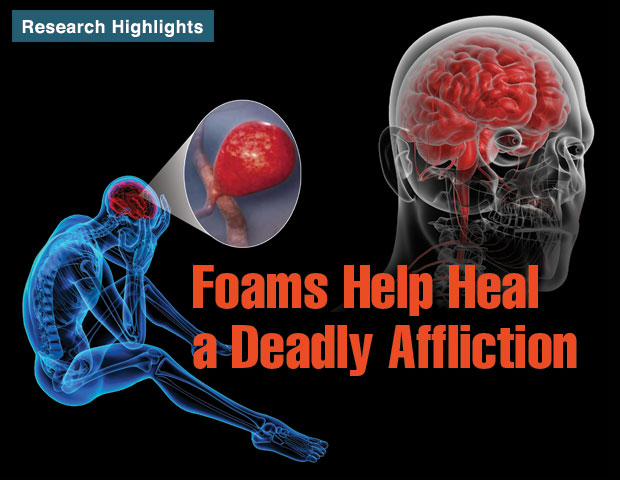 Aneurysms are outward bulges that form at weakened areas in arterial walls. Blood flowing through the sac increases the risk of rupture.

Deep in the recesses of the human brain can lie a silent, hidden killer—the aneurysm. It lurks among the vast network of arteries, surreptitiously evolving into a life-threatening condition for its unsuspecting victims. These outward bulges form at weakened areas in arterial walls, and the estimated 1 in 15 people who have aneurysms may never display symptoms of a pending rupture. If an aneurysm bursts, blood rushes to other areas in the brain and can cause massive tissue damage, stroke, and even death.

For those lucky enough to be diagnosed with an aneurysm before it ruptures, medical treatment is possible. The goal of any treatment is to isolate the aneurysm sac (the bulged-out section of the vessel) from the rest of the arterial blood flow to reduce pressure on the weakened vessel walls. The two most common treatment methods are either to surgically insert a clamp at the base, or neck, of the aneurysm or to fill in the sac with endovascular metal coils that occlude blood flow. However, both methods have risks. An incorrectly placed clamp can result in residual blood flow. Coils have the potential to unravel or induce the body’s inflammatory response, and the insertion process may need to be repeated during a patient’s lifetime.

Capitalizing on a five-year grant from the National Institutes of Health (NIH), researchers at Lawrence Livermore and Texas A&M University have combined advanced materials development and computational fluid dynamics (CFD) analysis to improve treatment for intracranial aneurysms. The team’s work builds on previous research funded by Livermore’s Laboratory Directed Research and Development Program and NIH to develop shape-memory-polymer (SMP) foam that is biologically compatible and can be used to plug an aneurysm before it bursts. (See S&TR, May/June 2008, Shaping the Future of Aneurysm Treatments.) This novel material significantly increases the efficacy of treatment and reduces patient risk compared with the traditional techniques for isolating aneurysms.

SMP foams are a class of polymeric material with extremely low density, enabling them to undergo substantial changes in volume. As a result, these materials can morph from one primary (original) shape into another (temporary) shape and back to their initial forms. Foams designed for treating aneurysms are cut to match the contours of each aneurysm’s sac and then compressed to fit inside a catheter for delivery to a specific site inside the brain. Once in place, the SMP foam is activated through temperature change to fill the sac, cutting off blood flow from the main artery and allowing the blood inside the sac to clot. “Working with the Laboratory’s high-performance computers helps us address two main questions about this process,” says Jason Ortega, a computational engineer and CFD simulation expert at Livermore. “First, we want to determine what hemodynamic changes occur to blood flow within the aneurysm following the treatment. Second, we want to know whether the foam promotes conditions that are conducive to clotting and aneurysm occlusion.”

Material scientists then use the simulation results to evaluate how SMP characteristics influence overall treatment. “There is a synergy between computation and chemistry,” says chemical engineer Tom Wilson, who led Livermore’s SMP development. “The models allow us to assess how blood flow would be affected by an SMP’s properties and to alter the material’s structure and composition to achieve the desired results.” This interrelationship led to insights in design criteria for foam cell size and structure and paved the way for improving the foam’s material transition properties, density, and biological compatibility. The CFD work has also provided valuable data for clinicians to use in determining the potential benefits of foam-based aneurysm treatment.

Understanding blood flow properties, clot (or thrombus) formation, and SMP material behavior inside an aneurysm requires the ability to model multiple length scales. “The models must account for centimeter-sized features of the aneurysm, millimeter-sized pores within the SMP foam, and the micrometer scale of the foam’s struts,” says Ortega. The team used the STARCCM+ code developed in private industry to achieve the desired resolution.

The models simulate the rheological behavior and velocity of blood flow through an aneurysm, showing how SMP foams change that flow and affect thrombus formation. Foam geometries were obtained using microcomputed tomography to image an SMP sample, which was then virtually refined to produce two foams with different densities: an open SMP with no material between the foam’s struts, and a closed SMP in which membranes fill the spatial voids to increase the foam’s surface area. The models reveal blood flow patterns within and around different types of foam and illustrate the degree to which each type promotes thrombus formation inside an aneurysm.

Working with patient data provided by a collaborating physician at Kaiser Permanente, Ortega used a high-fidelity CFD simulation to perform virtual angiography on aneurysms prior to and after treatment with the SMP foams. The finely resolved numerical study required approximately 100 million computational cells and produced more than 30 terabytes of data per foam device. The results illustrated how the foams reduced velocity fluctuations, increased fluid residence times, and lowered the blood shear rate to promote clotting. “Information from this type of simulation is more relevant to a physician’s work than a set of velocity gradients and equations would be,” says Ortega. “The models provide a dynamic simulated view of what clinicians observe during an actual angiography procedure and can be tailored to patient-specific details.”

The results revealed that the closed SMP design is highly effective at increasing blood residence time within an aneurysm, which reduces blood flow and better occludes the aneurysm. Additional models demonstrated the effectiveness of different foams at inducing thrombus formation. Results confirmed predictions that the closed SMP design would offer a higher clotting potential in the minutes following treatment, with 26 percent of the aneurysm volume promoting thrombus instead of the 1 percent achieved with the open SMP design. Through this CFD work, the team quantitatively validated the efficacy of a particular foam structure and provided important details on the clotting process required to stabilize an aneurysm. 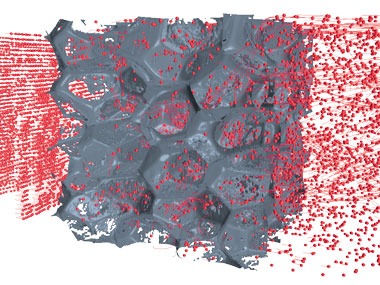 A computational fluid dynamics simulation illustrates the complex blood flow patterns that arise within and around the closed design for shape-memory-polymer (SMP) foam.

In tandem with the computational work, Wilson and Livermore materials engineer Ward Small collaborated with colleagues at Texas A&M to refine and experimentally test material characteristics of the SMP foams. “Texas A&M students worked under our direction at Livermore and at College Station to improve the foams,” says Wilson. Enhancements included increased hydrophobicity, decreased density, and improved biocompatibility.

SMPs would typically be activated within an aneurysm by an internal or external heat source, such as body temperature or a laser. However, foams must remain relatively resistant to water and other fluids until they can be properly placed in an aneurysm. Lawrence Scholar Pooja Singhal, who worked on the project as part of her graduate work at Texas A&M, adjusted the chemistry of the foam, in particular its monomer structure, to prevent premature expansion and to promote the mechanism by which the material biodegrades in the body.

Singhal integrated low-molecular-weight, symmetric, and polyfunctional hydroxyl monomers into a highly covalent cross-linked polymer structure, which maintains the mechanical properties and low density of SMPs but allows the degradation rate to be controlled. “Originally, SMP foams were designed to be biologically stable, meaning they would remain in the body but not degrade,” says Wilson. “Biostable SMPs were developed by creating monomer materials without ether or ester links. When the need arose for biodegradable foams, we selectively added oligomeric caprolactone—an ester-linked chemical group—into the polymer network.” Together, the hydrophobicity and caprolactone content control the degradation rate.

Additional adjustments to the material’s composition and the foaming process reduced the foam’s density from 0.020 to 0.008 grams per cubic centimeter, thereby increasing the SMP’s volume expansibility within an aneurysm. The temperature at which a compressed foam plug resumes its primary shape is called the glass transition temperature. At certain temperatures below the transition, the foam maintains its compressed shape. At higher temperatures, it reexpands to recover its primary shape. “The goal is to heat the material enough for shape recovery to occur but to keep the actuation temperature low enough to prevent damage to the tissue,” says Wilson. By reducing density and controlling the glass transition temperature, the team produced SMP foams with 100-percent shape recovery suitable for aneurysm stabilization.

Compressed SMP foams are delivered by catheter to an aneurysm sac within the brain. Once it is activated by temperature change, the foam expands to match the sac’s contours. 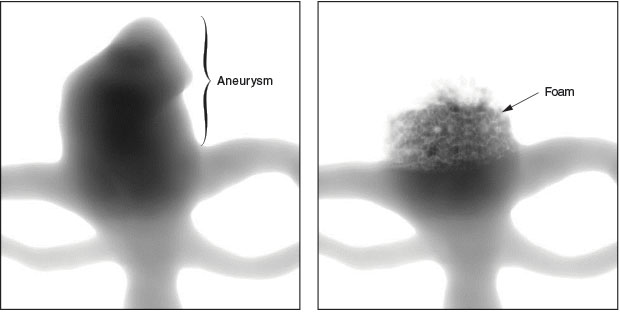 During an angiography procedure, a contrast agent is injected into the blood vessel and imaged using x rays to show how blood flows through the vessel. This virtual angiography simulation illustrates a patient-specific aneurysm before (left) and after (right) treatment with SMP foam. The foam reduces the flow (dark areas) and increases the blood residence time to promote clotting.

Wilson notes that the relationship between Lawrence Livermore and Texas A&M has been pivotal to the success of this project. “While we have focused on the materials development and computational work, our partners at Texas A&M have conducted experimental studies and proved the device’s functionality,” he says. The team is now working to obtain funding for the required regulatory tests and subsequent clinical trials, which would be performed by Texas A&M. Wilson adds, “Because we have the appropriate agreements in place and the partnership is well established, it would be relatively inexpensive for us to collaborate on future projects together.”

From a computational standpoint, Ortega sees value in planned efforts to predict the posttreatment outcome of foam-filled aneurysms and to model the complete healing process from initial delivery of the foam to final endothelial cell growth over the aneurysm opening. “More experimental data would be needed to validate the codes,” he says, “but the future possibilities are exciting.”

By combining high-performance computing and advanced materials development, the team has moved one step closer to offering a more efficient, less risky option for treating aneurysms. “Ideally, the foams could be tailored to each patient’s needs to promote a more successful outcome,” says Ortega. Biomedical breakthroughs such as this one improve the chances for preventing debility from deadly afflictions, allowing more people to enjoy healthy, productive lives.