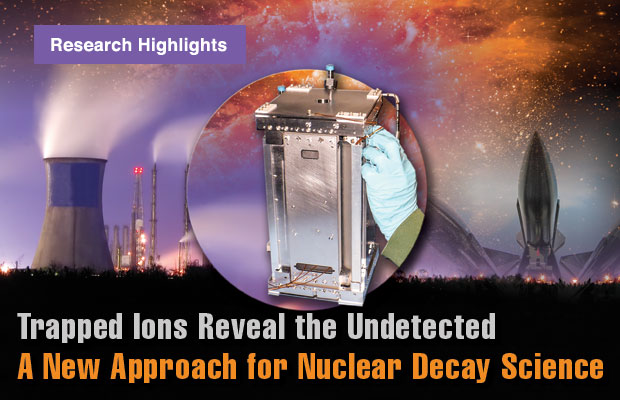 Radioactive decay processes, in which unstable atomic nuclei are transformed into stable particles, are crucial for the operation of nuclear power plants, a detailed understanding of nuclear weapons, and the creation of most heavy elements in the universe. Despite nearly a century of research, however, many nuclear decay mechanisms remain poorly studied because some of their reaction products, namely neutrons and neutrinos, are notoriously difficult to track.

While much of the scientific community builds ever-larger detectors to examine these elusive particles, a team of physicists led by Nicholas Scielzo in Livermore’s Physical and Life Sciences Directorate has taken a different approach. The researchers have developed a tabletop instrument that combines a device to “trap” ions with an array of detectors to record the speed and direction of all the measurable particles emitted in an experiment. With the resulting data, they can then infer the energy and direction of the undetected neutrons and neutrinos.

Scielzo describes this experimental approach as “the beginning of a revolution in nuclear decay spectroscopy.” The seemingly simple method offers the potential to discover subatomic particles that until now have only been hypothesized, thereby advancing scientific research on the atom and the structure of unstable nuclei. The approach also promises to provide nuclear data for better understanding how elements are created from supernovae, improving the design of nuclear reactors, and helping maintain the nation’s nuclear weapons stockpile.

To demonstrate the technique’s viability, Livermore scientists, in collaboration with colleagues at Argonne National Laboratory, used the ion trap to investigate two nuclear decay processes: beta decay and beta-delayed neutron emission. The experiments were conducted on the Argonne Tandem Linac Accelerator System (ATLAS), with support from Livermore’s Weapons and Complex Integration Principal Directorate, the Laboratory Directed Research and Development Program, and the Department of Energy’s Office of Science. Researchers from the University of California at Berkeley, University of Chicago, Northwestern University, University of Manitoba, and McGill University also participated in this study.

In beta-minus decay, a beta particle (an electron) is emitted from a neutron (a neutral particle in a nucleus), which becomes a proton (a positively charged particle in a nucleus). A neutrino (an electrically neutral subatomic particle with extremely small mass) is always ejected along with a beta particle. In some instances, beta-particle emission is followed by the emission of a neutron from the nucleus, a process called beta-delayed neutron emission. Gamma rays may also be ejected during both beta decay and beta-delayed neutron emission.

The ion trap detects these reaction products by suspending radioactive isotopes in a vacuum and confining them to a volume of about 1 cubic millimeter. A beam of ions of the isotope being studied, typically provided by an accelerator, is held in place by alternating electric fields that are tuned to confine the mass and charge of the ions of interest. The trap repeatedly opens and closes for one to several minutes to accumulate the ions, which vary in number from about 1,000 to as many as 1 million to collect the high-fidelity data. A small amount of helium is admitted to the trap to cool the ions. Detectors surrounding the trap measure the easy-to-detect particles released during radioactive decay.

When a trapped ion decays, all of its decay products, including the resulting “daughter” nucleus, are released from the trap’s confining fields. Immediately following the decay, the beta particle and any emitted gamma rays strike the surrounding detectors, followed a short time later by the recoiling daughter nucleus. By measuring the positions and energies of the emitted beta particles and gamma rays and determining the recoil direction and energy of the daughter nucleus, researchers can precisely reconstruct the positions and energies of neutrons and neutrinos.

(left) This diagram shows the experimental setup for an ion-trapping study of iodine-137 (137I+), which decays to xenon-137. About 7 percent of the time, the xenon-137 decays to xenon-136 (136Xe++) plus a neutron. (right) The ion trap uses electric fields to confine radioactive ions. Detectors surrounding the trap record the positions and energies of measurable particles emitted as the ions decay, such as the time a beta particle strikes a plastic detector and the time of flight required for the recoiling daughter nucleus to hit a microchannel-plate detector. High-purity germanium (HPGe) plates detect any gamma rays. With this apparatus, researchers can precisely reconstruct the energies of the difficult-to-detect neutrons and neutrinos.

In a 2012 proof-of-principle experiment at ATLAS, the Livermore-led team made the first-ever measurement of beta-delayed neutron emission by detecting the nuclei that recoil in the decay process of iodine-137. A well-known beta-delayed neutron precursor, iodine-137 decays to xenon-137. About 7 percent of the time, the xenon-137 emits a neutron to become stable xenon-136.

For this experiment, ions were captured in the trap every 5 seconds and accumulated for 145 seconds. Detectors made with a plastic scintillator material, a microchannel plate, and high-purity germanium were placed around the trap to measure beta particles, recoil nuclei, and gamma rays, respectively. The beta particle, traveling at nearly the speed of light, was detected first. The slower recoil nucleus was recorded hundreds to thousands of nanoseconds later. The range of travel times for the recoil nucleus corresponded to the recoil energy imparted to the xenon-137 and xenon-136 ions.

Scielzo explains that the team could easily distinguish the iodine-137 ions that emitted a neutron from those that did not. A nucleus that ejects a beta particle and a neutrino causes only a slight recoil (about 0.1 kiloelectronvolts) as it travels to a detector 5 centimeters away. In contrast, the resulting kick after neutron emission is easier to detect because a neutron is 2,000 times more massive than a beta particle. The nuclear recoil thus sends the nucleus backward like a speeding billiard ball. “If we detect a recoil larger than about 0.2 kiloelectronvolts, we know the energy was caused by an emitted neutron,” says Scielzo.

The measurement sensitivity of the ion trap’s detectors provides precise time-of-flight data for reconstructing a spectrum of energies for emitted neutrons. Scielzo adds that the new technique circumvents the limitations associated with attempts to directly measure emitted neutrons, such as reduced efficiency and less reliable measurement accuracy. 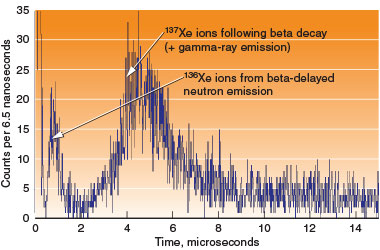 This spectrum shows results from ion-trap measurements of the beta decay of iodine-137, where Xe = xenon. The spike between 0.5 and 1.5 microseconds is the signal from the beta-delayed neutron decay events. With the recoil from neutron emission, the daughter nuclei travel much faster than the other beta-decay recoil ions. The later spike between 3 and 8 microseconds is from beta decay without neutron emission.

A Test for the Standard Model

The team also performed experiments with lithium-8 to determine the angle at which neutrinos were ejected during beta decay without neutron emission. When lithium-8 decays, it ejects a beta particle and an antineutrino and is transformed into beryllium-8. The beryllium-8 ion immediately decays into two alpha particles (helium nuclei consisting of two protons and two neutrons). Although the antineutrino is virtually undetectable, the ion trap can record all the other particles in the lithium-8 decay process. The researchers could accurately determine the direction and energy of each emitted antineutrino. In this way, the ion trap provides an entirely new method of neutrino spectroscopy.

“If we know where the beta particle and the nucleus went, we can deduce where the antineutrino went,” says Scielzo. “Because direct neutrino detection is very difficult, we avoid it entirely and instead calculate its momentum from the other particles.”

Such measurements are valuable for testing the so-called Standard Model, the generally accepted theory describing electromagnetism and weak and strong nuclear interactions. For the decay mechanism investigated by the team, the Standard Model predicts that the electron and antineutrino will tend to be emitted in opposite directions. If, instead, postulated particles reside outside the Standard Model, electrons and antineutrinos would be preferentially emitted in the same direction. The results of the lithium-8 experiment confirmed current theory.

Some of the measurements made in the lithium-8 experiment would normally require an enormous experimental facility such as the Large Hadron Collider in Europe, the world’s largest particle accelerator. However, the Livermore–Argonne experiments demonstrate that scientists can use this tabletop device to infer the existence of particles and thus produce important science. Future work is planned at Argonne to test the Standard Model with even greater precision. “If certain types of particles exist that we don’t know about, we will be able to infer them by carefully measuring the recoil nucleus and the beta particle,” says Scielzo.

Looking toward the Future

The team is now building an ion-trap system that is optimized for beta-delayed neutron spectroscopy using the Californium Rare Isotope Breeder Upgrade (CARIBU), a new beamline at the ATLAS Facility. CARIBU is designed to produce unstable, neutron-rich nuclei, which are needed to study the rapid neutron capture (or “r”) process. Scientists have predicted that the r-process occurs in certain supernovae and other astrophysical environments and is responsible for many elements in the universe heavier than iron. “The r-process is not well understood,” says Scielzo, “in part, because it is difficult to make neutron-rich nuclei in a laboratory.”

He notes that precision neutron and neutrino spectroscopy can address many important questions: Are there new particles or interactions that have yet to be observed? How were the elements from iron to uranium made? What are the properties of neutron-rich nuclei? Scientists might also use this approach to design nuclear reactors that operate more efficiently. “In addition,” says Scielzo, “understanding the environments in which large quantities of fission fragments are produced would be useful for the Laboratory’s stockpile stewardship research.”

Because of its enormous potential, the ion-trap effort is proving attractive to some of the Laboratory’s early-career scientists. Ryan Yee, a Lawrence Scholar from the University of California at Berkeley, has been developing the technique for the past three years and says, “This effort is high-profile work.” With experiments planned at Argonne in 2014, the Livermore team is looking forward to demonstrating the effectiveness of a cleverly designed tabletop instrument in illuminating the secrets of nuclear decay.