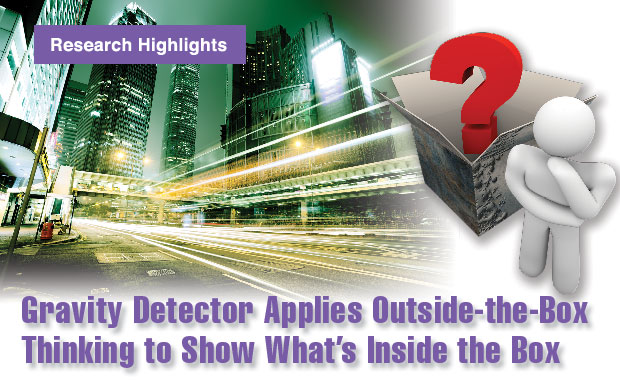 Quickly and accurately locating a nuclear threat hidden inside a moving vehicle is important for homeland security and emergency response. The main strategy for detecting nuclear material on the move involves identifying the material’s radiation signature. In some situations, however, detectors must operate passively, without manipulating a vehicle as it is searched. If nuclear material is shielded—for example, inside a lead box—detection by passive radiation signatures can become even more challenging.

To solve this conundrum, a collaboration involving researchers from Lawrence Livermore and AOSense, Inc., is exploring a method for examining the “box” itself. Led by physicist Stephen Libby in the Laboratory’s Physical and Life Sciences Directorate, the research team is developing detectors and related analysis tools to quantify the mass of a closed container and the spatial distribution of that mass. The team’s detector is designed to measure the mass of a box-within-a-box configuration—such as that typified by having an unusually heavy box inside a car or truck. Because the detector works quickly and passively, without the need to move, radiograph, or otherwise manipulate the vehicle, it offers the potential for real-time gravitational imaging, similar to other three-dimensional imaging techniques. The key to this intriguing innovation is gravity plus ultracold atoms.

Gravitational fields bend the paths of all moving masses. Earth has an enormous gravitational field—strong enough to affect the motion of distant, orbiting satellites. The field of a small, heavy object will likewise create tiny shifts in the paths of nearby moving atoms. The difference is one of scale. The gravitational acceleration near Earth’s surface is roughly 9.8 meters per second squared, while the local acceleration caused by a 25-kilogram mass (a heavy suitcase, for example) measured from a distance of 1 meter is about one-ten-billionth of that amount. “A sensor must be extremely sensitive and ‘noise free’ to detect the small changes in gravity caused by an object such as a lead-lined box inside a car,” says Libby.

Precisely measuring the perturbations in a gravitational field induced by a nearby mass is not a new concept. In the 18th and early 19th centuries, scientists Pierre Bouguer and Henry Cavendish developed experimental techniques to measure gravity, as did the late-19th-century physicist Loránd Eötvös. Bouguer focused on geodesy, the scientific discipline that studies variations in Earth’s mass distribution resulting from its surface topography. Cavendish and Eötvös addressed fundamental physics questions such as the strength of basic gravitational interactions and the principle of equivalence between inertial and gravitational mass (a key idea in Albert Einstein’s general theory of relativity).

Developers previously attempted to use these types of mechanical gravimeters for security applications, but such devices suffer from severe vibrational noise and baseline calibration drifts. In contrast, cold-atom-based sensors offer a practical approach to acquiring fast, accurate, local-gravity measurements, plus they are substantially free of the calibration limitations of conventional sensors.

Young, the president of AOSense, explains, “Gravity gradiometry measures the local variations in acceleration due to gravity. Oil and mineral prospectors use this technique, for instance, to measure changes in subsurface density. That information allows them to pinpoint subsurface anomalies and more accurately target oil, gas, and mineral deposits. Our application instead focuses on mapping the density distribution of a passing vehicle.”

Kreek, who leads Nuclear Detection and Countermeasures Research and Development at Livermore, adds that the team’s method complements passive radiation measurements. For example, he says, “In cases where personal vehicles cannot be examined with active interrogation techniques, gravity imaging would indicate when shielding might be present by detecting significant, high-density masses in unexpected locations.”

Although cold-atom gravity detectors involve complex physical phenomena, they have relatively simple equipment requirements: a laser source, vacuum cell, atomic vapor, and control electronics. “There are no moving parts other than the atoms themselves,” says Libby. “In gradiometry, the lasers cool paired clouds of atoms and launch or drop them in tandem. Each cloud is in a known quantum state when it is launched. The pair is further manipulated by Raman lasers to produce two spatially separated interferometers. The atoms in each interferometer undergo different quantum phase shifts as they individually ‘fall’ through gravitational fields of varying strength. The difference in the phase between the two atom interferometers allows us to measure gravitational disturbances such as those caused by a dense source nearby.” The technique is much more sensitive than existing mechanical gravity gradiometers and is free of most background noise, such as vibration.

Building a Picture of What Lies Within

Libby compares the team’s approach to computed tomography, which uses x-ray transmission images to mathematically build a three-dimensional image of an object’s interior. “Instead of x rays, we use the changes in gravity recorded by multiple sensors to create an analogous ‘tomographic’ array,” he says. “With those images, we create a picture of the object as a whole.” To achieve the accuracy required for inspections at border crossings, the researchers designed highly sensitive atomic interferometer models suitable for rapid analysis of vehicles passing through a portal. They also developed sophisticated physics models of the interferometers and used them to simulate the instrument’s response to various configurations of mass, including shielded threats and the background components of vehicles.

With funding from Livermore’s Laboratory Directed Research and Development (LDRD) Program, the team conducted extensive feasibility tests at the AOSense facility in Sunnyvale, California, to demonstrate that cold-atom gravity gradiometry can distinguish the mass distributions in nearby objects. Libby says, “Remarkably, these gradiometers can easily ‘see’ Earth tides, recording variations in the local gravity field of Earth as it is strained by the Sun and Moon. Although this level of sensitivity is not enough for the work we have in mind, we found that the cold-atom gravity gradiometers can achieve our more exacting standards as well.”

In feasibility tests with a prototype gravity gradiometer, a drive system moved a double-blind box up and down to simulate a target moving past a stationary sensor. The box held two tungsten cylinders, each weighing 12.7 kilograms. During the tests, the cylinders were moved to alter the distributions of the same total mass.

“We learned how to model and interpret the gradiometer signals well enough to distinguish the signals from different arrangements of the two cylinders,” says Libby. “In our preliminary demonstration, we deduced the right mass distribution 19 times out of 20.” The missed test may reflect the natural ambiguity of some gravity signals caused by the test setup, because measurements were taken from only one side of the container and along only one axis. In any case, says Libby, additional constraints are needed before the sensors are ready for border operations. 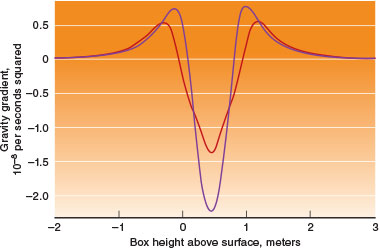 In double blind feasibility tests, heavy cylinders placed in a closed box were moved up and down next to a prototype gradiometer, creating different spatial arrangements of the cylinders’ masses. The gradiometer recorded changes in gravity as a function of box height above the surface. The resulting gravity signatures were used to infer the correct mass distributions (without prior knowledge of the cylinder placement).

Working in Tandem with Other Sensors

According to Libby, the team’s idea is to deploy cold-atom gradiometers with other sensors in a portal configuration. “Sensors in use today readily detect the gamma rays and neutrons emitted by unshielded nuclear materials,” he says, “but shielding absorbs the particles, weakening their device-recordable signatures. Because cold-atom gravity gradiometers detect the shielding, adding them to the scanning mix would make for a powerful combination.”

The team has improved the sensor design, making it even more sensitive than the prototype, and added a detailed signal-analysis system. “We are also creating a library of gravity models for the parts used in different vehicles, such as a car’s frame or doors,” says Libby. “Including these background gravity signatures will ensure that the instrument does not mistake a heavy car part—the engine block, for instance—for a suspicious mass. The mass source models are based on automotive models originally developed by the National Crash Analysis Center at George Washington University using LS-DYNA, a Livermore-developed code that has become an industry standard for solid mechanics modeling.” 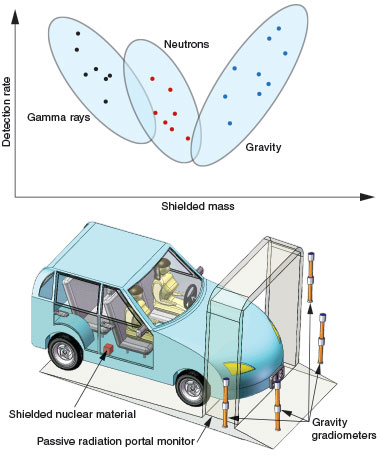 A notional graph of detected radiation signals (top) shows the range of capabilities for gamma-ray, neutron, and gravity detectors as the threat of shielding increases. Combining the three techniques into a portal (bottom) of passive radiation detectors would increase the chance of discovering nuclear material hidden inside a vehicle.

The researchers are developing a fixed portal gravity sensor system to deploy in conjunction with passive radiation sensors. The next challenge, supported by the Defense Threat Reduction Agency, will be to design and prototype a mobile version of that system.

A related LDRD project is focused on accurately determining Newton’s gravitational constant—a fundamental element of the gravitational force law. To measure this physical constant, says Libby, “We will turn the security projects inside out. Rather than attempting to deduce unknown masses in unknown distributions from our physics signal model, we are manufacturing an object that has a precise, known mass distribution as well as accurately known and repeatable measurement locations. From there, we will calculate backward to determine how well we understand the physics model and its ingredients such as Newton’s constant. The LDRD project has a nice synergy with the existing work on developing a detector.”

Libby praises the multidisciplinary team and each member’s contributions. “We have physicists, signal analysis and precision engineers, threat analysts, top-notch technicians, and amazing summer students, all of whom are critical to the success of the projects we’ve been working on,” he says. “AOSense has been great to work with and offers unique capabilities in developing high-performance cold-atom sensors. We’re looking forward to the next steps in developing these sensors and in answering some fascinating basic physics questions.”

Work supported by the U.S. Department of Homeland Security, Domestic Nuclear Detection Office, under competitively awarded contract IAA HSHQDC-11-X-00550. This support does not constitute an express or implied endorsement on the part of the government.