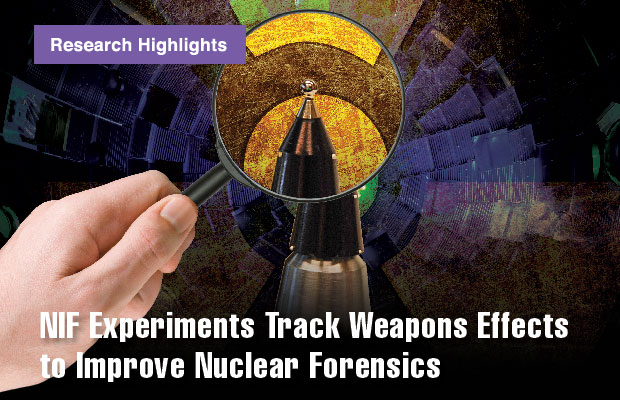 If a nuclear device were to be detonated near or above Earth’s surface, defense agencies would rely on forensic tools and technologies to quickly detect, locate, and assess the blast. Acoustic signatures—atmospheric and seismic disturbances resulting from the detonation—would likely be some of the first data available for analysis. To better understand these signatures and improve U.S. nuclear forensics capabilities, scientists at Lawrence Livermore conducted a series of energy-partitioning, energy-coupling (EPEC) experiments at the National Ignition Facility (NIF). These nonnuclear shots replicated, at a very small scale, the physical processes occurring in a nuclear detonation, allowing researchers to closely examine the weapons effects produced by a blast.

Nuclear forensics research dates back to the 1940s, when scientists working on the Manhattan Project developed the first atom bomb. Early studies focused on measuring such effects as air-blast pressure waves and seismic motion during aboveground nuclear tests. Recorded data on blast pressure and velocity revealed critical information about a detonation, such as how shock waves reflect and converge, and how much energy is transferred to the atmosphere and deposited in the ground. Aboveground experiments were banned by treaty in 1963, but data from those tests remain valuable benchmarks for studying weapons effects. Underground nuclear experiments, conducted from 1963 to 1992, further advanced forensics knowledge, supplying improved data about the interaction of a nuclear explosion with geologic materials in the subsurface test chamber.

With NIF, researchers have a new opportunity to explore weapons effects for a range of detonation parameters. NIF provides a laboratory setting for scaled experiments that re-create the energy density generated by a nuclear explosion without using any nuclear materials or generating radioactivity apart from transient x rays. “When we started the EPEC experiments, the question was whether we could use NIF to make measurements that in the past could only have been acquired in an aboveground nuclear test,” says Livermore physicist Kevin Fournier, who leads the EPEC project. “We learned that tiny nonnuclear experiments inside the NIF target chamber scale well to the conditions encountered in the actual nuclear tests of decades ago.”

Researchers have long understood that the hydrodynamic effects of a nuclear explosion scale in space and time as the cube root of the total energy released. The EPEC team could thus replicate the weapons effects of a 2.5-kiloton nuclear explosion by scaling the NIF experiments to be 1,000 times smaller than the three-dimensional environment of a full-scale test and 1,000 times faster in time.

The EPEC experiments used a 2-millimeter silver target to represent the device. Four of NIF’s 192 laser beams deposited a mere 10 kilojoules of energy in the tiny sphere. Physical processes occurred in microseconds instead of milliseconds, and the energy released was one-billionth of that produced by a full-scale detonation. Computer simulations showed that a NIF-scale experiment with the blast 30 millimeters above a surface compare extremely well with simulations of a 2.5-kiloton explosion 30 meters above the ground.

The EPEC team originally planned to use gold for the target but found that the experimental design required a stronger material. Fournier explains that typical NIF experiments take place in the high vacuum of the target chamber where gold’s ductility is not a problem. “Because we want to match the environment of an aboveground explosion, we had to surround the target with 1 atmosphere of pressure,” he says. “We chose silver because it is strong enough to prevent the atmosphere from crushing the target, and it provided a suitable enclosure for our experiments.”

The target was encased in a polycarbonate cylinder, which was held in the center of the target chamber by a diagnostic instrument manipulator. The fit was tight: the cylinder’s diameter is 30 centimeters, just 20 millimeters narrower than the access port for the manipulator. A borosilicate glass disk inside the cylinder simulated Earth’s surface beneath the laser-driven explosion.

Energy not lost to scattering is available to interact with and be absorbed by the silver target. Absorbed laser energy ablates material from the target’s surface, ionizing its atoms and accelerating electrons in low-density regions of the plasma. The absorbed energy is then partitioned or transformed into stored internal energy in the resulting plasma ions, kinetic energy of the target debris, and radiation from the hot plasma components. X radiation from the plasma and the kinetic energy of the debris drive the blast, shock, and fireball phenomena, just as in a nuclear explosion. 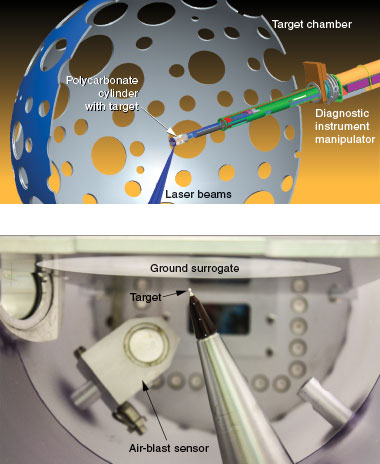 Experiments with a Unique Tool

In preliminary energetics experiments conducted in March 2011 and January 2012, the EPEC team deployed streak cameras, fast and slow photodiodes, and time-integrated spectrometers to measure the energy coupling. Results showed that laser–target energy coupling was 93 percent of the energy delivered to the target—an excellent result. Perfect coupling would be 100 percent. Other diagnostics measured the x-radiation environment inside the target and through the target wall. The team found that a target wall only 7 micrometers thick delivered the optimal energy flux.

For the next set of experiments, which measured weapons effects, the pressurized EPEC system was inserted into the NIF target chamber before each laser shot. An alignment system positioned the cylinder to within 200 micrometers of the chamber’s center where NIF’s laser beams converge. The cylinder contained 1 atmosphere (more than 100 kilopascals) of pressure until the target was destroyed, at which point the gases inside it—nitrogen, oxygen, argon, krypton, and xenon—vented into the chamber.

The first shot in the December 2012 series was performed without a ground surrogate (a so-called ideal air blast). The shock wave in the “atmosphere” was measured by two Ktech sensors placed 10 and 15 centimeters from the target (simulating 100 and 150 meters, respectively). In subsequent shots, the target inside the cylinder was suspended at either 1 or 10 millimeters above the glass disk to simulate burst heights of 1 or 10 meters above the simulated ground surface. Three Ktech sensors embedded in the ground surrogate measured the arrival time and stress rate of shock waves as they passed each sensor location. With this setup, the team could study, in a controlled manner, the partitioning of the system’s total energy between ground shock and dynamic air overpressure for the different blast heights. 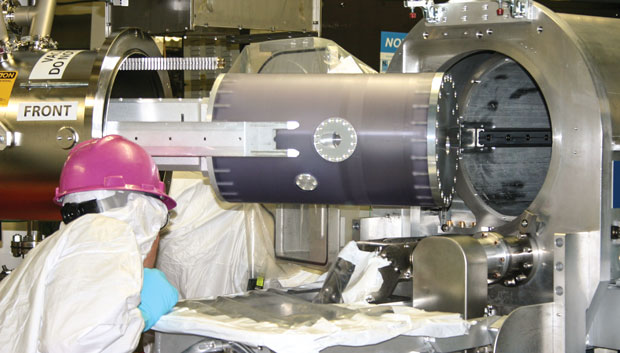 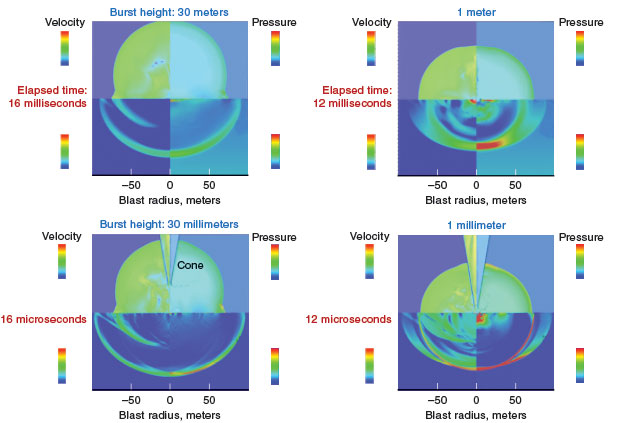 Simulation results are remarkably similar for (top row) 2.5-kiloton nuclear blasts and (bottom row) 10.5-kilojoule NIF experiments that compare an elevated blast (left column) and a detonation on the surface of a ground surrogate (right column). The NIF simulations show the cone through which laser beams entered the target. Color maps with each snapshot indicate changes in (left) velocity and (right) pressure measured on the same absolute scale.

Data revealed that the partitioning of energy between the air blast and seismic motion is highly sensitive to blast height. Extremely steep changes in partitioning occurred as height increased. This same dependence is found in historical nuclear test data. (Partitioning is also sensitive to blast depth, as in an underground test; however, for the EPEC experiments, the team recorded only aboveground data.) The gas mixture achieved a scaled fireball with dimensions comparable to those of a nuclear detonation in air at standard temperature and pressure.

Fournier says, “These experiments are a good start on a proof-of-principle demonstration for a forensics code-validation tool.” Next, the team will focus on improving diagnostic techniques for future experiments and increasing the fidelity of simulations, for example, by including three-dimensional simulations with more accurate material properties. By using NIF’s unique capabilities to better understand weapons effects, the EPEC team is helping the nation to enhance its nuclear forensics capability.