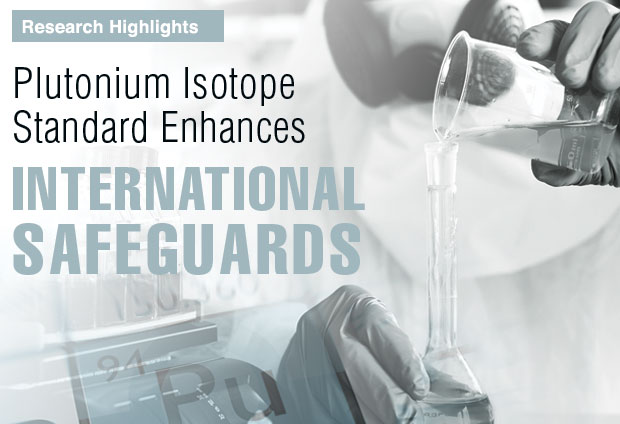 For decades, Lawrence Livermore researchers have developed new technologies to help detect undeclared nuclear materials and associated activities. Many of Livermore’s ongoing efforts have been funded by the Department of Energy’s National Nuclear Security Administration (NNSA) through its Office of Nonproliferation and Arms Control (NPAC) and the Office of International Nuclear Safeguards. A continuing aim of NPAC is strengthening the capabilities of the International Atomic Energy Agency (IAEA) and its member states to implement and meet obligations regarding international safeguards. Based in Vienna, Austria, IAEA is responsible for deterring the proliferation of nuclear weapons through early detection of possible misuses of nuclear materials or technology.

IAEA’s Network of Analytical Laboratories (NWAL) analyzes environmental samples taken by IAEA inspectors at nuclear facilities worldwide. Careful analysis demands extraordinarily sensitive equipment and high-purity reference materials that are used to measure the amount and isotopic composition of a sample. Over the last three years, a Livermore team led by isotope geochemist Ross Williams has been fabricating a high-purity plutonium-244 (244Pu) reference material for use in IAEA analyses of environmental samples. The new material is expected to enable more precise measurements and at lower concentrations.

Williams explains that a critical task of IAEA is verifying nations’ assurances about their use or production of plutonium isotopes. Verification requires regular environmental sampling of nuclear facilities and their products, followed by analysis at one of IAEA’s laboratories, which include Livermore. High-purity reference materials are used to measure the amount and isotopic composition of a sample through a technique called isotope dilution mass spectroscopy (IDMS). This technique offers detection limits at femtogram (10–15 grams) or attogram (10–18 grams) levels of plutonium isotopes. The analyses typically focus on obtaining the exact ratio of plutonium-239 (239Pu) to plutonium-240 (240Pu), which can be correlated with specific nuclear processes, ranging from nuclear weapons research and production to nuclear power–related activities.

IDMS precision depends on the quality of the isotopic reference material used for analysis. The isotope presumed to be the least abundant in the sample is preferable as an isotopic tracer, called a spike. Isotope 244Pu is extremely rare in nature and is not produced in quantity by the nuclear fuel cycle. With a half-life of 80 million years, 244Pu is also the most stable of plutonium’s six isotopes. These characteristics make it ideal as a spike for quantifying plutonium isotopic content and their relative concentrations.

“Adding a high-purity rare isotope reduces the uncertainty of analysis when you are looking for more prevalent isotopes,” says Williams. He notes that a typical environmental sample contains zero (or an extremely small amount) of 244Pu but unknown amounts of 239Pu, 240Pu, plutonium-241, and plutonium-242. The new Livermore plutonium spike contains precisely measured concentrations of 244Pu with trace (but known) amounts of the other plutonium isotopes. The extremely low abundance of these other isotopes enables higher precision measurements of the ratio of 239Pu to 240Pu in environmental samples.

Williams notes that the worldwide stocks of the current 244Pu spike are nearly exhausted. In addition, the existing reference material lacks the desired isotopic purity and contains relatively high levels of the other plutonium isotopes, the correction for which increases the uncertainty of measurements. The new high-purity 244Pu certified reference material (CRM) should increase the confidence in NWAL-reported results. 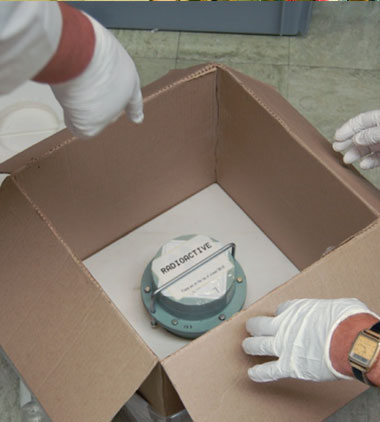 In 2015, the All-Russian Scientific Research Institute of Experimental Physics shipped highly purified plutonium-244 (shown here) to Lawrence Livermore, where it was further purified, analyzed, and dispensed into aliquots. The plutonium was finally made into a high-purity certified reference material for use in analyses of environmental samples from the International Atomic Energy Agency.

Spike Origins Date from the 1970s

During the early 1970s, 86 plutonium targets were irradiated at the Department of Energy’s Savannah River Site to produce gram quantities of californium-252 (252Cf). Twenty-one irradiated targets were processed at Oak Ridge to recover the 252Cf and other elements. A 37-gram plutonium fraction containing 25 percent (or 8.8. grams) of 244Pu was also recovered. The plutonium was enriched to provide the nearly exhausted, high-purity 244Pu currently in use. In 1991, IAEA began to explore options to produce high-purity 244Pu needed by its analytical laboratories using tails (at about 17 percent 244Pu) formed during the earlier enrichment. VNIIEF announced its capability to perform the required separation processes using its electromagnetic mass separator. However, technical preparations did not begin between NNSA, VNIIEF, and IAEA until more than a decade later. In 2005, NNSA supplied IAEA with a 0.5‑gram “test” portion of the Oak Ridge source material. Following many years of negotiations, the test material was delivered to VNIIEF in February 2012, and work began on electromagnetic separation of the material to increase its isotopic purity. As part of the international agreement, VNIIEF had to demonstrate its capability with the test portion, and IAEA would verify measurements of the separation products. 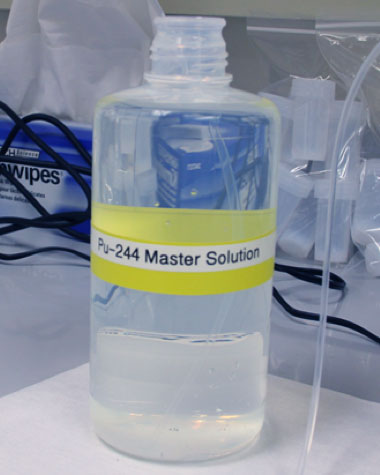 Following several stages of purification, the team prepared a master solution of plutonium-244. Five-milliliter aliquots of the solution were dispensed into 190 (30-milliliter capacity) fluorinated ethylene propylene bottles, which will eventually be sent to IAEA’s Network of Analytical Laboratories.

VNIIEF scientists performed two stages of electromagnetic separation for the supplied material. The first round of separation in 2012 yielded approximately 10 milligrams of intermediate product. A small quantity was shipped to Livermore in April 2013 for analysis. Both the U.S. and Russian measurements of the plutonium isotopic composition were in agreement—the purity had increased to 98.86 percent. The following year, VNIIEF conducted the second and final round of separation. 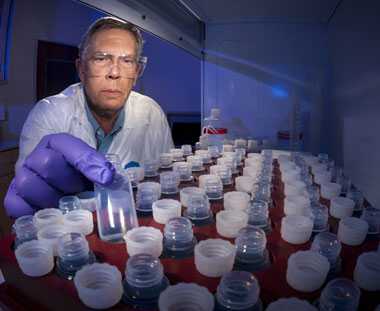 In early 2015, IAEA oversaw the conversion of the final liquid solution into dry salts of plutonium nitrate to ensure safe transportation. The entire volume of the final product (approximately 800 micrograms) was sent to Livermore in May 2015 to be fabricated as high-purity CRM. The bulk of the high-purity material was contained in two 25-milliliter glass volumetric flasks. Analysis performed by Williams’s team confirmed the value reported by VNIIEF—99.98 percent, slightly below the target value of 99.99 percent.

Upon receipt of the purified material, the Livermore team embarked on a painstaking, multistep effort to prepare the CRM. The researchers worked in a laboratory that was refurbished in 2014 solely for the effort. The laboratory features advanced analytical instrumentation and state-of the-art air filtration technology found in many semiconductor fabrication facilities. The special facility was required to eliminate any possibility that residual trace amounts of plutonium isotopes left in other laboratories from research conducted many years ago might contaminate preparation of the CRM. 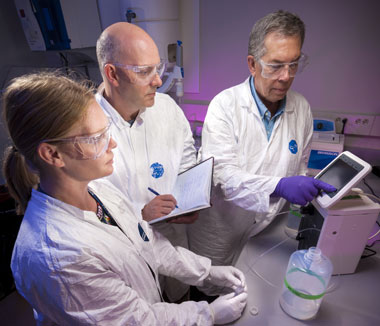 (from left) Livermore’s Kerri Treinen, Richard Essex of the National Institute of Standards and Technology, and Williams review the procedures for dispensing a certified reference material from a master solution. (Photo by Randy Wong.)

The team transferred the material from the two glass flasks, verified that the isotopic composition of each was identical, and purified the plutonium to separate any uranium and low concentrations of trace elements, such as lead and iron found in the final product from VNIIEF. “Our focus has been on preserving the isotopic purity of the plutonium and ensuring that it does not contain elements that might interfere with analyses,” says Williams. A master solution was then prepared from the purified plutonium.

Five-milliliter aliquots of the master solution were dispensed into 190 (30-milliliter capacity) fluorinated ethylene propylene bottles for long-term storage. Simply cleaning the bottles required several months of work to ensure their sterility and several more months to determine the tare (empty) weights of the individual bottles. The filled bottles were weighed and their contents verified so that each contained about 110 nanograms of 244Pu. The solutions were then dried to ensure a long-term shelf life of at least 20 years.

The isotopic purity of each CRM is greater than 99.98 percent 244Pu, with 0.0040 percent 240Pu and 0.0012 percent 239Pu. This purity is significantly greater than the 244Pu spike currently used by NWAL. Assuming that analysis of one environmental sample requires up to 10 picograms of 244Pu, and with a tenfold margin to account for various quality control measurements, one CRM unit containing 110 nanograms of 244Pu will be sufficient for analyzing 1,000 samples, which covers IAEA’s annual needs.

In early 2017, CRM preparation entered its final phase prior to NIST certification. This phase involves rigorous verification of the composition and concentration of the CRM using IDMS. In October 2016, the team prepared samples of the 244Pu CRM mixed with a 239Pu spike obtained from Los Alamos, while others were mixed with a 239Pu spike from the European Union’s Institute of Reference Materials and Measurements. These IDMS mixtures were sent to Los Alamos and CEA for independent analysis, while the Livermore team also conducts its own analysis. The team will compile the three laboratories’ findings and report these results to NIST for evaluation. Upon completion of the evaluation, NIST will determine in early 2018 the suitability of the 244Pu CRM for certification. Following certification, the units will be packaged for shipment and long-term storage. NWAL will be the first recipient.

These high-purity 244Pu spikes will become extremely valuable to the safeguards community for improving analyses of very low-level plutonium in environmental samples. Williams emphasizes that the spike was made possible through more than a quarter-century of international collaboration. He says, “It’s been a long and tortuous path, but we’re almost there.”