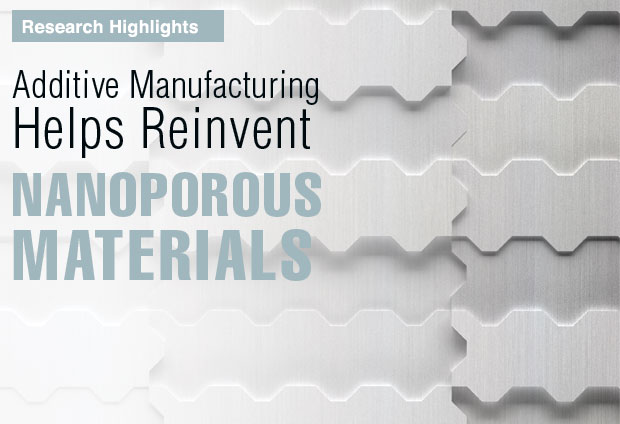 Low-density bulk materials, foams in particular, are a ubiquitous ingredient in everyday life. Used in various products from kitchen sponges to insulation in spacesuits, these materials have both basic and exotic applications. At Livermore, a type of bulk material called nanoporous foam plays a role in high-energy-density (HED) experiments at the National Ignition Facility (NIF).

Lawrence Livermore has a long history of developing a class of foams known as aerogels, which are useful for scientific research because their high surface area gives them unique physical, chemical, and mechanical properties. Aerogels are formulated through a simple wet-chemistry process that exploits nature’s methods of self-assembly, resulting in a random network of interconnected, nanometer-sized particles. However, the wet-chemistry process limits a scientist’s control over the aerogel’s multiscale morphology and thus its structural architecture across various length scales.

To address the need for low-density materials with engineered morphologies, shapes, and densities, Lawrence Livermore researchers Juergen Biener and James Oakdale, along with a team of Laboratory scientists, are applying additive manufacturing (AM) processes to generate specific nanoporous structures. (See S&TR, March 2012, Materials by Design.) Funded by the Laboratory Directed Research and Development (LDRD) Program, the scientists have created low-density foam parts with submicrometer features that can be tailored to precisely controlled macroscopic dimensions and nonuniform architectures—perfect for HED experiments and other scientific and commercial applications. 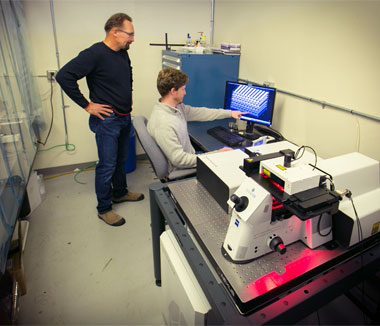 Low-density foam target components are typically made through precision machining of bulk aerogel samples, and in the case of graded-density target components, by assembling several machined parts made from materials of different densities. Producing such target components is expensive, time consuming, and not easily reproducible. Moreover, the resolution of traditional AM-based fabrication methods limits their use for producing the kind of low-density foams needed for HED experiments. Recently, advancements in instrumentation have improved AM resolution and allowed such methods to reproduce the structural characteristics of bulk aerogels. These improvements allowed Biener and Oakdale to strategically implement an AM technique known as two-photon polymerization direct laser writing (2PP DLW) to print specialized, low-density foams. Biener says, “This technique is uniquely suited to fabricate ultrahigh-resolution, low-density foam components for superior performance.” 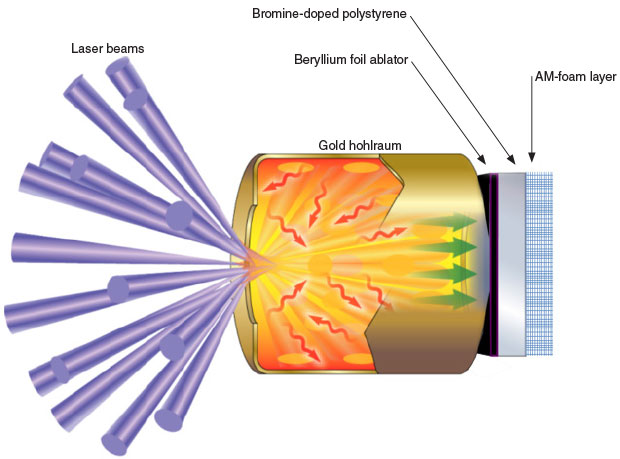 Laboratory researchers conducted high-energy-density ramp compression experiments at the University of Rochester’s OMEGA Laser Facility in which nanoporous foams, created through additive manufacturing (AM), were used to control the temporal shape of the pressure wave applied to a sample. In these tests, laser beams drive an indirect plasma shock wave through the reservoir consisting of a beryllium ablator, a bromine-doped polystyrene film, and the AM foam onto an aluminum thin film sample (not shown).

The foams are created by focusing a femtosecond-pulsed laser onto a photo-responsive liquid material. At the focal point of the laser beam, the light intensity is high enough to drive two-photon absorption processes, which cure the liquid into a solid glassy material. The focal spot of the laser is then moved around in space to obtain the desired three-dimensional (3D) structure. Unlike other AM techniques, 2PP DLW allows the scientists to create extremely fine features, such as lines less than 150 nanometers wide (200 times thinner than a human hair). Yet, fine features at high resolution come at a price. Only a finite area (100 by 100 micrometers square) can be scanned at a time because of limitations imposed by the focusing optics. Thus, to build a millimeter-sized structure, smaller structural units must be printed one at a time and arranged over the desired area—a process known as stitching.

A New Type of Building Block

“We often compare the process of stitching to playing with Legos®,” explains Oakdale, a postdoctoral researcher in the Materials Science Division of the Laboratory’s Physical and Life Sciences Directorate. “We are building microscale blocks and stacking them together to create a larger structure.” According to Biener and Oakdale, the tricky part of creating these structures was determining how to fabricate samples large enough for HED experiments. 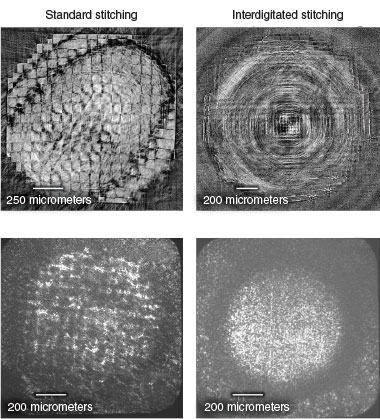 The scientists used the Laboratory’s Nanoscribe Professional GT printer to initially print a millimeter-sized sample. However, they soon discovered the system software could not handle the large file size. As a result, team member Will Smith rewrote how the writing process was controlled. “By creating our own writing process, we have full control over the structure and how that structure is made,” explains Smith. “This direct design approach allows us to fully optimize our production and bypass any delays embedded within the software.” After Smith’s breakthrough, printing a millimeter-sized foam sample went from taking two months to less than eight hours.

Lawrence Livermore experimental physicist Ray Smith and team members tested the newly printed foams at the University of Rochester’s OMEGA Laser Facility. For each experiment, a target containing a disk of the 2PP DLW–created foam was mounted behind a beryllium foil ablator and a layer of x-ray absorbing bromine-doped polystyrene. Laser beams drive an indirect plasma shock wave through the AM foam and onto an aluminum target. The density and thickness of the foam controls the temporal shape of the pressure wave applied to the aluminum layer. 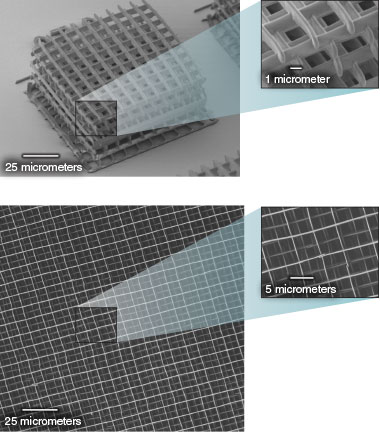 Follow-on experiments using the interdigitated foams revealed significantly more uniform pressure drives. In addition, the team found that the foam briefly holds the sample pressure constant at 0.5 gigapascals (nearly half a million atmospheres of pressure) for 5 nanoseconds—a discovery with huge implications for other types of research. “Those 5 nanoseconds may be enough to test material properties at constant high pressures,” says Smith. “We could potentially develop this technique into a platform to study matter deep within planetary interiors.”

The combination of 2PP DLW and interdigitated stitching has allowed the team to fabricate reproducible foams with engineered density gradients and the exact macroscopic dimensions required for tooling-free integration into test targets. This process is much faster and more streamlined than traditional approaches using bulk carbon aerogels. Biener says, “It opens the door to many more applications.”

One potential application is supporting the spherical ablator shell inside targets for inertial confinement fusion experiments at NIF. The ablator shells are usually supported by ultrathin polymer tents, which, although thin, can still affect implosion. Low-density foams are a promising alternative because their extremely low density effectively renders the foams invisible. Another application could be as a sacrificial template for hohlraum liners to increase the efficiency of the hohlraums during experiments.

Foams could also be used for energy storage purposes. Most energy applications require directional mass transport, and its effectiveness determines how fast a battery can be charged or discharged. “The fabrication of foam materials with engineered morphologies for directional mass transport is at the forefront of materials research in the area of energy storage,” says Biener. AM methods are ideal for energy storage because they have the capability to define the 3D architecture of a material. Another LDRD-funded project led by Livermore scientist Marcus Worsley is already in the early stages of investigating this application. “The project is aimed at further improving the power performance of flow batteries through structural optimization,” says Biener.

Going forward, Biener and Oakdale’s goal will be to apply their techniques to templating. With material templates, scientists could create multiple copies of a material—such as the hohlraum liner—all exhibiting identical properties. The challenge will be determining how to uniformly coat and remove the template without damaging the created structure. “To achieve this objective, we will need to develop application-specific resins that enable efficient and uniform surface deposition as well as damage-free template removal,” says Biener. “We now have the technology we need to make further progress.”