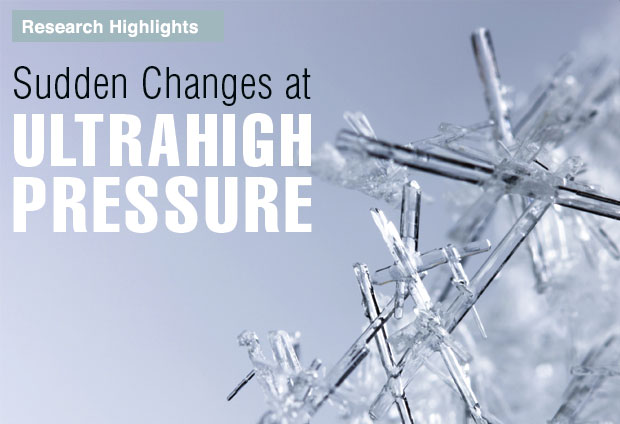 Lower water’s temperature to its freezing point and it turns to ice. Raise it to its boiling point and it becomes water vapor—a gas. At one atmosphere of pressure (101.3 kilopascals), which prevails approximately at sea level, these phenomena are familiar to everyone. However, at much higher pressures and temperatures—up to hundreds of thousands of atmospheres and several hundreds to thousands of degrees—water and other matter behave in complex ways. Under such conditions, a solid of the same composition may assume different crystalline structures, and the molecules that form liquids may order themselves in various configurations. These changes in molecular arrangements are called phase transitions.

Livermore physicist Jon Belof and a team of physicists, engineers, and computational scientists are subjecting matter to extreme conditions and simulating experiments with high-performance computers to study phase transitions at ultrahigh pressures. Examining how matter arranges itself and behaves at these levels may reveal new underlying physics principles. The work also supports the Laboratory’s mission in stockpile stewardship by improving models that are used to simulate stockpile components.

Belof has been studying phase transitions in elements since 2010, when he was a postdoctoral researcher at Lawrence Livermore. In January 2017, Belof was one of 100 scientists in the nation to receive a Presidential Early Career Award for Scientists and Engineers. This honor is the highest bestowed by the U.S. government on outstanding scientists and engineers who are early in their independent research careers. “The study of material phase transitions at extreme conditions could be a new scientific frontier,” he says. “We can now study these phenomena in ways that were not possible five years ago, both experimentally and computationally, allowing us to gain insights into the atomistic physics of material transformations.”

Livermore’s increasingly powerful high-performance computers and new tools for shocking matter at ultrashort timescales have enabled Belof’s team to peer into the physics of phase transitions at an unprecedented scale—occurring as fast as tens of picoseconds (trillionths of a second). With these capabilities, Belof and his team are developing a predictive theory of nonequilibrium phase transitions. In such cases, a material has had its pressure and temperature changed so rapidly that it enters a state far from stability. In an effort to return back to equilibrium, the stressed material changes its phase, but when that process begins and how quickly it occurs are not well understood. By developing a predictive theory for phase evolution, scientists can greatly improve simulation capabilities, and thus achieve more accurate results of a material’s behavior and physical properties.

The Secrets of Shocked Zirconium

Recently, Belof’s team turned its attention to zirconium (Zr). This metal, which has a high melting point (1,855ºC), is used for heat-resistant applications in the aerospace and nuclear industries. It also has biomedical applications, such as in dental implants and hip replacements.

Funded by Livermore’s Laboratory Directed Research and Development Program, Belof and his colleagues partnered with SLAC National Accelerator Laboratory (previously called Stanford Linear Accelerator Center) to run Zr experiments. Using SLAC’s Linac Coherent Light Source (LCLS), the team subjected 1.7-micrometer-thick Zr samples (each deposited onto a 2.2-micrometer layer of aluminum) to high-energy laser pulses. During the experiments, the Zr samples underwent more than 100 gigapascals (GPa) of pressure for a duration of less than 1 nanosecond (one-billionth of a second). For that very brief period, while the Zr was compressed, LCLS delivered an intense x-ray pulse to probe the atomic structure of the material by diffraction.

Livermore’s Mike Armstrong, co-leader of the experiment, says, “The real power driving this experiment is the LCLS x-ray pulse, one of the brightest sources of x rays in the world.” Bombarding the sample with x-ray pulses and recording how the x rays scatter provides a record of the sample’s phase transitions. “The distinguishing feature of our experiments is the ability to observe the details of phase transitions at very short timescales,” he adds. Since the window of opportunity to examine the shocked material is so small, researchers need to record the diffraction patterns in the briefest intervals possible, less than 100 picoseconds. 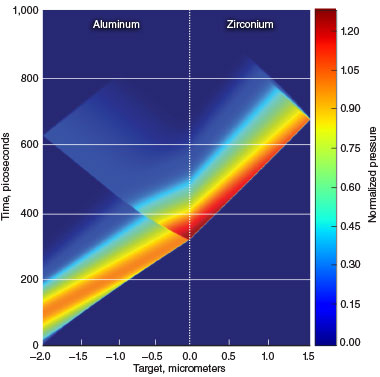 Simulation data from one of the team’s experiments using the Linac Coherent Light Source at SLAC National Accelerator Laboratory show how pressure on the target—aluminum ablator (left) and zirconium (right)—changes over time. The x-axis shows the length scale of the target. The laser pulse is passing through the target from left to right, and the color gradient represents the increased pressure from the energy of the pulse. The pressure units are normalized to 27 gigapascals.

The results of the experiments were striking. The known shock Hugoniot—a set of high-pressure, high-density states achieved when a shock wave is driven at constant velocity through a sample—for Zr indicates that the material passes through multiple solid phases. “However, if the drive is rapid enough, the zirconium can melt directly out of its ambient pressure phase without going through its intermediate phases, suggesting that the transformation pathways are different when the material is subjected to very rapid compression,” says Belof. “The kinetics seem to dictate that the relaxation to an equilibrium state is nontrivial.” 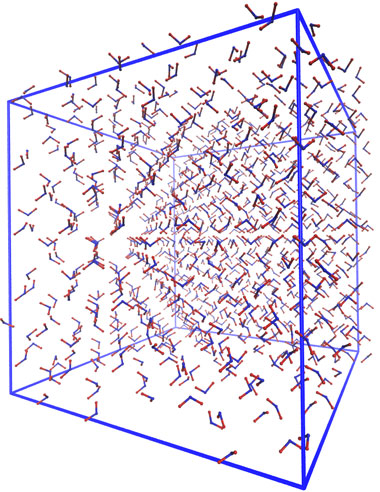 This visualization depicts a molecular dynamics (MD) simulation of the high-pressure water polymorph ice VIII. Oxygen atoms are blue and hydrogen atoms are red. The applied pressure is 10 gigapascals and the temperature is 200 kelvin. MD simulations such as this are making it possible to develop models for phase transformation kinetics in hydrocodes.

Typically, a material’s phase transitions are explained by classical nucleation theory (CNT), first developed in the 1920s. During the formation of a new phase, such as the transition from a solid to a liquid, tens of thousands of molecules organize themselves into the new phase first, forming clusters which then seed the transition. More molecules then aggregate to these nucleation sites until the changeover from liquid to solid is complete. The laws of thermodynamics govern when the change potentially starts and where it ultimately ends (the equilibrium state). At the pressures and temperatures produced during the experiments, CNT begins to break down. Belof says, “At this very short timescale, we could be seeing new physical principles at play that we are just starting to uncover.”

Modeling Nucleation at the Atomic Scale

To better understand the physics required for modeling phase transitions, Belof and colleagues are using massively parallel codes on Livermore supercomputers to model the details of each step. Computational materials scientist Luis Zepeda-Ruiz is applying these codes to model systems involving tens of millions of atoms and to follow individual atoms as they change from one phase to another. “For atomistic-level simulations, we still cannot reach the length and timescales associated with most experiments, with a few exceptions,” he says. Molecular dynamics simulations are limited by the time step used to propagate the equations of motions. The faster the physics, the smaller the time steps. “However, at extremely high deformation rates, processes happen rapidly. We can achieve greater simulation accuracy at these very short timescales.”

A visualization of homogeneous nucleation according to classical nucleation theory shows (a) crystals begin to form clusters in a liquid at nucleation sites. (b) Each site grows as more molecules aggregate to the clusters. (c) Growth stops when the phase change to a solid is complete. (Liquid atoms are removed for clarity.)

Zepeda-Ruiz is modifying a code called the Large-scale Atomic/Molecular Massively Parallel Simulator (LAMMPS) to routinely simulate 30 to 40 million atoms, and at times more than 200 million, during a phase transition. “We can pinpoint the interface between a solid and a liquid with good accuracy,” he says. The atomistic-level LAMMPS code provides parameters, such as nucleation and growth rates, that are used in other hydrodynamics codes—SAMSA, developed by Belof, and ARES—to model the material at the continuum level. Together, these codes provide multiscale coverage. Livermore’s high-performance computing (HPC) infrastructure makes the work possible—few laboratories in the world have the computing power needed to pursue this research systematically.

The Wonders of Water's Phases

Improved simulation has also allowed the research team to model the solidification of water at ultrahigh pressures using, for the first time, a physics-based model for the phase transition. “Water is one of the most complex substances in existence, so simply determining its equation of state (EOS) is difficult—and we need the EOS before we can attempt to solve the mysteries of kinetics,” says Belof. The EOS describes the phases of a material at varying pressure and temperature. Water has at least 17 solid phases. 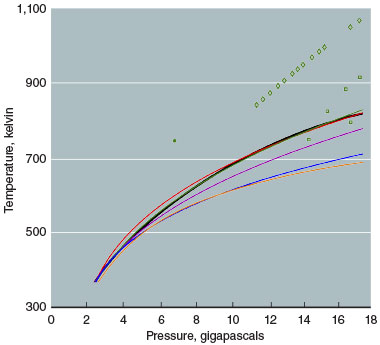 A portion of the phase diagram for water shows the approximate boundary between liquid water and ice VII. The many curves illustrate boundaries reported by different research teams, indicating that the boundary is still imperfectly known. The Livermore team’s theoretical model of the boundary is the black solid line.

One reason why this research is important is that water may exist at ultrahigh pressures on some of the many super-Earths detected by NASA’s Kepler Mission, a few of which may harbor life. Escherichia coli bacteria have been shown to survive at pressures as high as 2 GPa. Furthermore, many scientists believe the majority of the universe’s water exists as an ultracold glassy state, a particular phase of water that is of intense interest.

Postdoctoral researcher Philip Myint, working with Belof and colleagues, has explored the solidification of water into ice phases at ultrahigh pressures. “We are trying to implement CNT in a code and use that to understand dynamic compression experiments as well as make predictions. Past models of phase transitions in shock physics have been empirical,” says Myint. After successfully modeling a number of shock physics experiments on water, several long-standing controversies on the compressive freezing of water are closer to being resolved.

At pressures above 2.2 GPa, water freezes into ice VII, a state in which the molecules order themselves into a cubic crystalline form (unlike the hexagonal form of ice typical at Earth’s surface). Ice VII forms through nucleation clusters that grow until all the material has solidified. This form of ice could be common at the high pressures of extrasolar super-Earths and can exist at temperatures well above 600 kelvin.

Through HPC simulations, Belof, Myint, and colleagues have observed a breaking point at about 7 GPa. “At this pressure, ice VII may form through a homogeneous nucleation process where the clusters contain fewer than a dozen molecules—perhaps as few as two or three—instead of thousands,” says Myint. In contrast to freezing initiated by heterogeneous nucleation, which occurs along the plate walls and may take hundreds of nanoseconds to complete, freezing initiated by homogeneous nucleation occurs within the bulk of the water and is completed in less than 10 nanoseconds. “The liquid is being driven so rapidly that it’s approaching instability,” says Belof. “The dynamic freezing of water to ice VII is shedding light on the fundamental physics of nucleation, since this magnitude of undercooling cannot be achieved without rapid compression.” Exploring this new frontier of phase transitions will reveal how nature transforms matter away from equilibrium.”