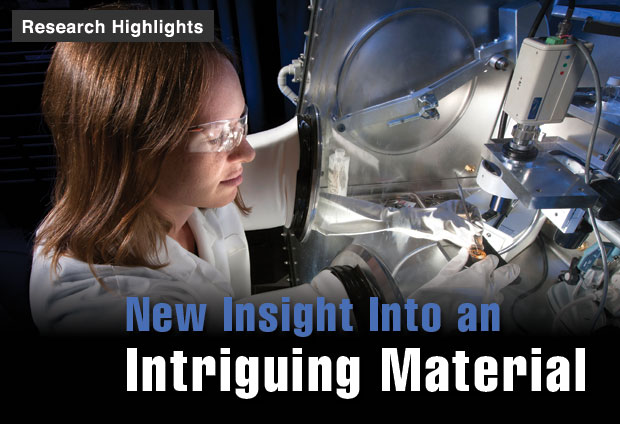 Physicist Amy Jenei assembles a lithium-hydride target inside a glovebox to protect the air-sensitive, hygroscopic material from contamination. (Photo by Randy Wong.)

New Insight into an Intriguing Material

Experiment and simulation are two of the most powerful tools in a scientist’s toolbox for delving into the mysteries of material properties. Recently, this formidable combination proved key to solving a conundrum about lithium hydride, the lightest ionic chemical compound.

For decades, modeling the equation of state (EOS) of materials at extreme conditions has presented a challenge to scientists. The EOS of a material describes the relationship between the thermodynamic conditions of pressure, density, and temperature, and under what set of these conditions the material changes from one phase (solid, liquid, or gas) to another. Previous experimental data for lithium hydride was limited, consisting of measurements from gas-gun experiments and three data points at higher pressures gathered from underground nuclear tests conducted many years ago.

The material, which has the smallest number of electrons for a chemical compound, has also proved difficult to simulate using theoretical models. “Various theoretical approximations predicted widely different equations of state at high pressures,” explains Heather Whitley, a program coordinator for a two-year-long research effort focused on lithium hydride. “Because lithium hydride’s constituent atoms are so light, the material is particularly sensitive to quantum effects. In addition, EOS models tend to differ in their treatment of the material’s electrons, and few experimental constraints existed on the models at high pressure. These model discrepancies motivated us to investigate lithium hydride in more detail.”

Lithium hydride is an interesting material for several reasons. With the highest hydrogen content of any hydride, it has potential applications for hydrogen storage and is a good material for shielding nuclear reactors. It also provides a useful benchmark for theoretical models of material, given the small number of electrons per atom in the system. Livermore physicists worked with collaborators at Sandia National Laboratories in Albuquerque, New Mexico, to more accurately constrain which EOS models for lithium hydride work best over a wide range of temperatures and pressures, opening the door to its potential use in numerous applications. 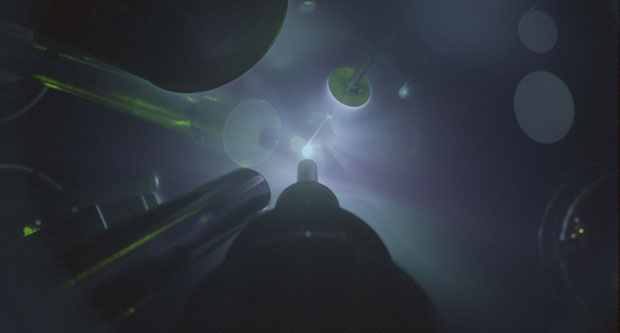 Hit It, Hit It Hard

Livermore physicist Amy Jenei, who led the experimental portion of the project, conducted the research at the University of Rochester’s Omega Laser Facility in Rochester, New York. In a series of experiments, a small disk of lithium hydride was subjected to laser-generated shock waves, which hit the target material with supersonic velocity, taking the material to a new thermodynamic state with higher pressure, density, and temperature.

The series of experiments allowed the team to plot a set of high-pressure, high-density states—called a Hugoniot curve—for the material. Although the lithium hydride Hugoniot had been previously predicted using a variety of simplified computer models to describe its thermodynamic state, experimental data were sparse, and the three pre-existing highest pressure measurements, taken at pressures just above 10 megabars (1 megabar is the pressure of 1 million atmospheres, or 100 pascals), had substantial uncertainties. Jenei explains, “My job was to design lithium hydride targets, subject them to shock experiments at Omega, and obtain more reliable Hugoniot measurements that the modelers could have confidence in.”

The challenge, Jenei adds, was not so much with the experiments themselves, which were conducted with an established technique, but in working with the air-sensitive material. Lithium hydride is extremely hygroscopic—it reacts with moisture, which made it tricky to design and fabricate the targets and to ensure their integrity. After exploring different target designs for her experiments, Jenei decided on two. One design featured a disk of lithium hydride sandwiched between quartz plates, with the lithium hydride encased in mineral oil, containing a minimum amount of dissolved water, and epoxy. For the second design, the lithium-hydride disk was compressed to a few kilobars in a pressure cell, together with a thin quartz disk. “The quartz equation of state is well known from previous experiments, so we used it as a reference to determine the equation of state of lithium hydride,” says Jenei.

The targets were driven to high pressure using up to 12 beams from the Omega laser, with pulses 1 to 1.6 nanoseconds in length and energies of 400 to 500 joules per beam. The laser energy created a shock in the quartz, which then passed into the lithium hydride. The velocity of the shock front as it passed through these materials was measured continuously using interferometry. In this study, measurements of the pressure, density, and temperature along the principal Hugoniot (the set of states reached in a single shock from ambient conditions) were extended up to 11 megabars. In the experiments with the target sandwiched between two quartz plates, the experimentalists gathered data for higher shock pressures as well, since the front end of the shock wave “rebounded” off the rear quartz, launching a second shock back into the already-compressed lithium hydride and generating even higher pressures. This measurement extended the secondary Hugoniot up to 13.8 megabars. 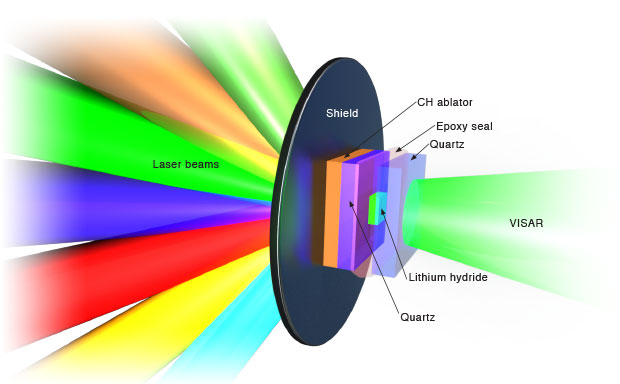 During an EOS experiment, Omega’s intense laser beams ablate polystyrene (CH) to launch a shock in the quartz, which then passes into the lithium hydride. The pressure and particle velocity are continuous across the quartz–lithium-hydride boundary. In this “sandwich” design, the shock also passes from the sample into the back quartz plate, creating a second shock from the back plate into the sample and yielding higher pressures. Shock velocities were determined using a VISAR (velocity interferometer for any reflector) diagnostic. (Rendering by Adam Connell.)

Taking It from First Principles

“To make the physics equations more tractable and solvable, physicists have to make educated approximations or assumptions. These approximations generally set a region of temperatures and densities where a given method is believed to be accurate,” says Whitley. “We wanted to examine how various approximations affect the resulting thermodynamic properties so that we could determine which existing EOS models were reasonable. This investigation also provided high-quality simulation data for developing new models.”

The team compared four different ab initio codes—including ones based on quantum molecular dynamics—each of which takes a different approach to the problem. “Each code has different strengths when addressing equations of state for various regimes of temperature and pressure. Taken together, we could compare results over a broad range of existing models,” says Whitley. In addition, the codes provided constraints, from which a new, more accurate EOS model could be built, a task that was undertaken by Livermore’s Kyle Caspersen.

The team’s analysis showed that some models, including the one developed by Caspersen, clearly yielded results in better agreement with the Omega experimental data. Thus, the researchers are confident that they now have a good model for determining lithium hydride’s EOS over the principal Hugoniot up to 11 megabars. 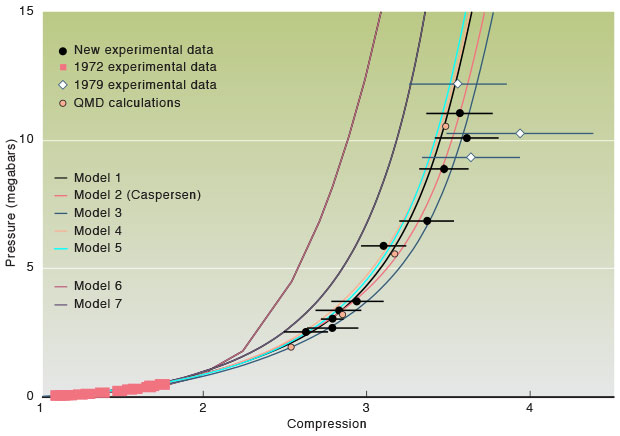 A Number of Firsts

Lawrence Livermore’s counterparts at Sandia conducted similar exercises in both theory and experiment. The institution collaborated with Jenei to use Sandia’s Z machine for compressing lithium-hydride targets to high pressures with intense magnetic fields. The results generated by Sandia’s theoretical models matched those from Livermore. Whitley and her colleagues were very pleased. She says, “Through experiment and simulation, we resolved the major differences between EOS models.”

The team’s success has even greater implications. “To the best of my knowledge, this work is the first time in which the four ab initio calculation methods were compared at such a high level of detail,” says Whitley. “It’s also the first time this many ab initio methods have contributed directly to an EOS model that could then be compared to detailed experimental data. It was a procedure that worked well for lithium hydride, and could be applied to other materials.”

Looking toward the future, the team plans to use the powerful laser beams at Lawrence Livermore’s National Ignition Facility to shock lithium hydride to even higher pressures and test the EOS models in regimes beyond those available in past underground tests. These studies could bring about shocking—and intriguing—developments, to be sure.