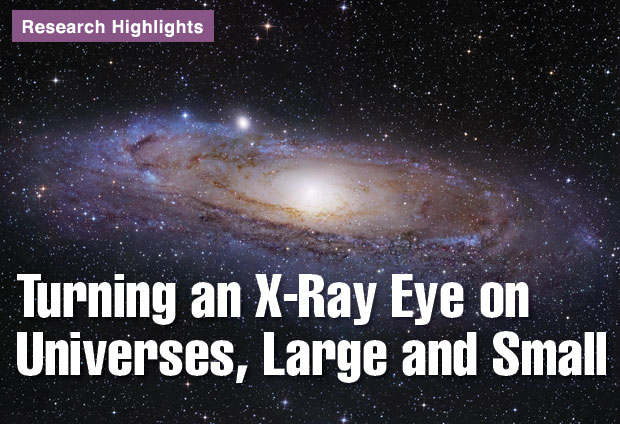 Turning an X-Ray Eye on Universes, Large and Small

Answers to many scientific mysteries lie in realms invisible to the human eye. Clues to some of the most fundamental questions in astronomy, cosmology, and nuclear science lurk in sections of the electromagnetic spectrum outside the small slice of wavelengths one can see. To better understand questions of scientific and national importance, the Laboratory has ventured into research involving a wide electromagnetic spectrum, from the longest radio waves to the shortest gamma rays.

As a part of this mission, scientists and engineers at Lawrence Livermore have created and nurtured a world-recognized expertise in the art and science of developing x-ray optics. Beginning in the 1970s, x-ray optics were designed and installed in high-energy-density physics diagnostics for early laser systems such as Shiva and Nova. Two decades later, the Laboratory honed its optics skill by participating in the Extreme Ultraviolet Lithography (EUVL) program—a unique government–semiconductor industry collaboration formed to explore using extreme ultraviolet wavelengths for fabricating next-generation computer chips. (See S&TR, November 1999, Extreme Ultraviolet Lithography: Imaging the Future.) Livermore’s Michael Pivovaroff, an associate division leader for physics in the Physical and Life Sciences Directorate, notes, “The Laboratory’s contribution to the quarter-billion-dollar EUVL project involved a large multidisciplinary team of scientists and engineers with special knowledge in x-ray optics, photon–material interactions, deposition technology, and materials science. Since that time, we have been stewards of this expertise and the accompanying capabilities, including magnetron sputtering, metrology, and modeling the properties of x-ray optical systems.”

The Laboratory has been called upon throughout the last two-plus decades to develop x-ray optics for a variety of projects and programs, including high-energy-density physics experiments at the National Ignition Facility, astrophysics research, and synchrotron science. More recently, Livermore x-ray optics prowess has played a role in creating special x-ray telescopes designed to detect the dark matter of the universe and in developing instruments to assay the makeup of spent nuclear fuel. 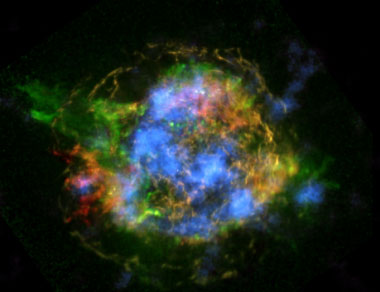 Lawrence Livermore has a long history of developing advanced x-ray optics for viewing portions of the electromagnetic spectrum typically invisible to the human eye. Such optics are part of NASA’s Nuclear Spectroscopic Telescope Array (NuSTAR), which images hard x rays ranging in energies from 3 to 79 kiloelectronvolts (keV). This image of the supernova remnant Cassiopeia A shows high-energy x-ray data (blue) captured by NuSTAR. Lower energy x rays previously recorded from the Chandra X-ray Observatory are shown in red, yellow, and green. (Image courtesy of NASA.)

Although x rays are subject to the same phenomena as visible light—reflection, refraction, reflection—designing optical structures to effect those properties is challenging. As Chris Walton, a materials scientist in Livermore’s Condensed Matter and Materials Division, explains, “For x rays to completely reflect, they must graze the surface of an optic, striking at a small, glancing incidence angle. Furthermore, the higher the energy of the x ray, the trickier it becomes to design an optic for reflectivity.” Photons of high-energy x rays are strongly absorbed by matter such as air or the lens material and are thus hard to guide and direct.

Two common designs that use grazing incidence mirrors to collect and focus x rays are Kirkpatrick-Baez (KB) and Wolter optics. KB optics are two grazing incidence reflective mirrors that focus x rays to an appropriate detector or film. Although KB optics have few parts to assemble, they have less light-gathering area, which makes it difficult to image a weak source. The Wolter family of designs, which includes telescopes, has substrates with more complexity that allow concentric shells of x-ray mirrors to be “nested” inside one another to achieve large light-gathering areas.

Multilayered structures are common in both types of optics. Developing multilayer-coated x-ray optics—including relay mirrors, telescopes, microscopes, and filters—has become a Livermore specialty. For these systems, precise, multilayer coatings of alternating materials are deposited upon super-smooth substrates. “These systems can consist of hundreds to thousands of bilayer pairs,” Walton says. “We vary the types of materials used, their thicknesses, and other properties to carefully tune the reflectivity for specific applications.” 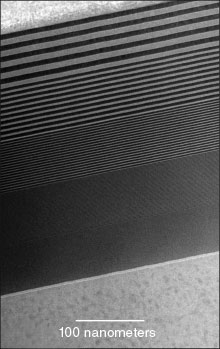 A transmission electron microscope image shows a cross section of an optic made with alternating thin-film layers of zirconium (dark bands) and carbon (light bands) on a silica (silicon dioxide) substrate. The zirconium is dark because it more strongly absorbs and scatters electrons as well as x rays, making it useful in x-ray mirrors.

The Mystery of Dark Matter

One of the big unknowns in cosmology involves the composition of the universe. Only about five percent of its composition can be observed directly—the rest is “darkness.” Dark energy (roughly 68 percent) has no mass and is accelerating the expansion of the universe. Dark matter (about 27 percent) has mass but does not interact easily. Its presence is deduced by its gravitational effect on visible matter.

Several theories exist on what kinds of particles constitute dark matter. A strong contender is the axion, a hypothetical subatomic particle that is very light and electrically neutral. If they exist, axions could be detected when they are converted to photons in the presence of strong magnetic or electric fields. This phenomenon could, in theory, create axions in the Sun and is the basis for most strategies to detect the elusive particle.

CERN’s Axion Solar Telescope (CAST) uses a prototype dipole magnet from the facility’s Large Hadron Collider as the basis for a solar-axion detector. The 9-tesla magnetic field acts as a catalyst to transform axions into x rays. CAST has been collecting data since 2003, and Livermore joined the international experiment in 2005. Last year, a Laboratory-led team that included researchers from Columbia University and the Technical University of Denmark (DTU) Space National Space Institute built a new x-ray telescope for CAST based on the Wolter telescope design. This telescope is designed to focus axions that had been converted into x rays and increase the signal-to-noise ratio by a factor of approximately 100, while simultaneously allowing an accurate measurement of the background signal. The entire system was operational for the first time in the summer of 2015.

Livermore is now turning an x-ray eye to the International Axion Observatory (IAXO), a proposed system for CERN that aims to achieve a signal-to-noise ratio 100,000 times better than CAST. This substantial improvement is made possible by building dedicated subsystems including a large magnet, optimized x-ray optics, and low-background detectors. The heart of IAXO will be a superconducting magnet with eight large bores that maximize the axion-to-photon conversion area. Each of the eight magnet bores will be equipped with Livermore-designed x-ray-focusing optics based on a Wolter telescope design. The proposed optics consist of nested, highly reflective mirrors that will reflect x-ray photons at shallow grazing incident angles, directing the photons to sensitive x-ray detectors.

IAXO optics are envisioned to be similar to those installed on NASA’s Nuclear Spectroscopic Telescope Array (NuSTAR)—an x-ray astrophysics satellite with two focusing telescopes that operate in the 3-to-79-kiloelectronvolt (keV) energy band. NuSTAR’s optics, also developed in part by Lawrence Livermore, consist of thousands of thermally formed glass substrates deposited with complex multilayer coatings to enhance the reflectivity above 10 keV. Todd Decker, a Livermore engineer who played a key role in building NuSTAR’s x-ray telescope, says, “We learned more about making telescopes from our involvement with NuSTAR, and we have many good ideas on how to improve substrates as a result.” 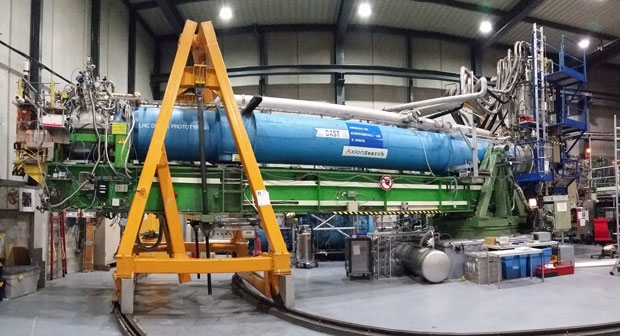 The CERN Axion Solar Telescope (CAST) features a test magnet (blue structure) from CERN’s Large Hadron Collider. The magnet is supported by the green “cradle” that also holds cooling and electrical equipment. The yellow structure and railroad tracks allow the apparatus to follow the Sun as it changes position relative to Earth.

The capability to nondestructively examine and measure the content of specific isotopes of interest is critical to nuclear safeguards and nonproliferation. Livermore’s Marie-Anne Descalle is the principal investigator for a project funded by the Laboratory Directed Research and Development (LDRD) Program to create mirrors that measure hard x rays for nuclear security. She explains, “The ability to detect hard x-ray or soft gamma-ray emissions (photons ranging up to several hundred kiloelectronvolts) from special nuclear material plays an important role in a number of national security applications.” One such application is the nuclear safeguards required for treaty obligations.

Hard x-ray optics offer one path to dramatically improve detection performance. These optics effectively collect the photons emitted from relatively weak sources, such as uranium-235 or plutonium-239, and filter out nuisance sources that obscure a significant spectral signature. She notes, “With just a bare detector, the spectral lines of interest in a spent fuel rod are overwhelmed by the high count rates emitted by cesium-137 and other isotopes. In essence, the lines of interest are simply drowned by the noise.”

The project had many challenges to overcome. “We didn’t know for certain whether multilayers would work well above the 100-kiloelectronvolt threshold, and we needed to detect photons ranging up to several hundred kiloelectronvolts,” says Descalle. She and the LDRD team built on efforts first funded by the Department of Energy’s Office of Defense Nuclear Nonproliferation Research and Development to characterize multilayer systems and create a new class of optics and conduct tests with flat mirrors. The LDRD funding allowed the team, which included researchers from Livermore’s Physical and Life Sciences and Engineering Directorates, as well as collaborators from DTU and the European Synchrotron Radiation Facility (ESRF), to study photon interactions with multilayers in the hard x-ray band and produce robust, inexpensive, and high-accuracy mirror substrates. They tested their optics at ESRF, one of the only x-ray light sources in the world with sufficiently bright beams to investigate photon energies as high as 750 keV, and measured x rays of energies above 500 keV. 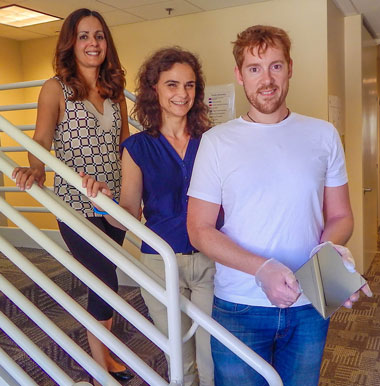 The researchers have also benchmarked a simulation code to predict the performance of optimized coatings for various applications and conducted an experiment at Livermore’s Jupiter Laser Facility, successfully demonstrating the technique in high-energy-density plasmas and expanding applications for hard x-ray optics. The experiment used flat mirror substrates. Future experiments will use curved x-ray mirrors, which provide better information by filtering out more of the undesirable hard x-ray lines. Pivovaroff notes, “For hard x-ray mirrors, alignment becomes more difficult because shallower grazing angles are needed at higher energies. New types of substrates will help us overcome some of these challenges.”

Descalle’s team has been working on several cost-effective techniques for creating substrates, including chemical treatment of plastic and new methods to slump (heat) glass. Preliminary results on the plastic show some promise, but Descalle and Decker are particularly interested in a type of extremely thin glass for creating a substrate that is highly flexible. Descalle says, “We need to understand how the flexibility of the glass may affect the coating process, the material’s shape, thermal transport, and other properties. Our team has the expertise to solve the challenging issues related to this work.”

The Laboratory’s 40-year foray into x-ray optics research and development has been highly successful. “We support the Laboratory’s core missions and basic science efforts, from helping to solve some of cosmology’s more vexing questions to providing details about special nuclear materials,” says Pivovaroff. “In maintaining our optics expertise from the time of the EUVL program, Livermore experts can create multilayer materials with different properties and deposit them on curved optics for concentrating images, or on flat optics for relaying x-ray photons or filtering spectral signals. This work is an institutional strength that stretches across the breadth of the Physical and Life Sciences and Engineering Directorates. By making the invisible visible, we are helping deliver solutions to scientific questions of national importance.”