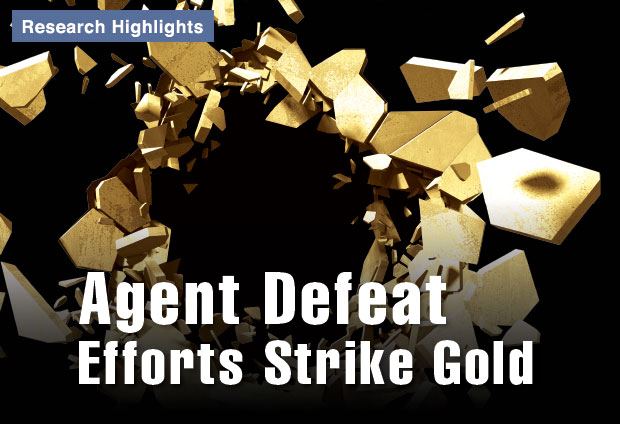 The U.S. military must be able to deal with a broad range of contingencies, including some that are extremely challenging technologically. One such challenge is to destroy a stockpile of chemical or biological agents before they can be deployed. In this scenario, a specialized “prompt agent defeat” (PAD) weapon is required. The ideal PAD weapon contains payload materials that are thermally persistent—burning long and hot enough to rapidly and thoroughly eliminate the agents—and that produce minimal blast overpressure, which could liberate a chemical or biological agent before it is destroyed and thereby cause collateral damage. Such weapons usually contain a high explosive to initiate and disperse the PAD payload.

Both CrashPAD, developed in 2004 to destroy agents stored in lightweight structures, and Shredder, a more penetrating version developed in 2007, use a payload of white phosphorus. However, this pyrophoric material spontaneously combusts on contact with air and is therefore dangerous to handle and store. When the effort to create a replacement for CrashPAD began, Lawrence Livermore was tasked with helping develop a payload material with less risk than white phosphorus but without sacrificing effectiveness.

Lawrence Livermore has contributed to such agent defeat research and development efforts—including Shredder and CrashPAD—in various capacities since 1999. The Laboratory’s tasks have included concept development, design, materials development, safety analysis, testing, and characterization. For its latest charge, the Livermore agent defeat team, in partnership with the Naval Postgraduate School (NPS), has developed a thermite-based payload that is far more effective than white phosphorus and much easier to work with. The breakthrough recently earned Livermore team lead John Molitoris and his colleagues their third Laboratory commendation for these efforts, a 2016 Gold Award from the Weapons and Complex Integration (WCI) Principal Directorate for exceptional innovation and excellence. 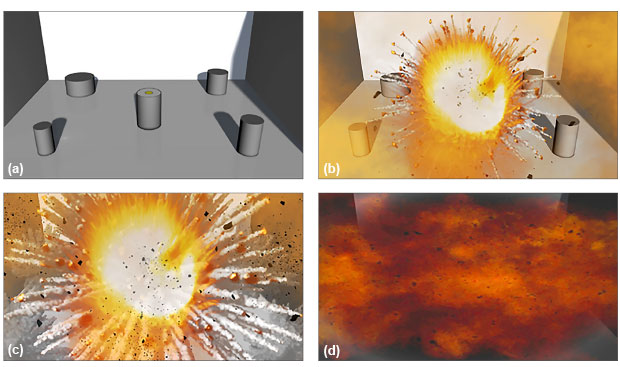 Livermore researchers are helping develop a weapon that can penetrate a storage facility and destroy chemical or biological agents inside before they can be deployed. Illustrations depict (a) a thermite-based payload (in the center of the space shown) delivered to a storage facility containing canisters of agents; (b) initiation of the weapon by high explosives; (c) creation of a thermitic fireball; and (d) establishment of a persistent thermitic cloud, which rapidly and efficiently destroys the agents. (Renderings by Sabrina Fletcher.) 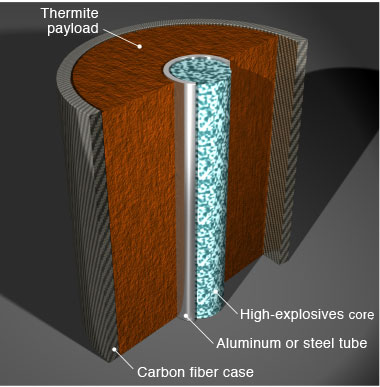 A cross-section drawing shows the components of the prototype agent defeat weapon that was subjected to performance tests in the firing tank at Livermore’s High Explosives Applications Facility. (Rendering by Sabrina Fletcher.)

Prior reactive materials experience and initial feasibility testing enabled the Livermore team to quickly determine that thermites, a type of pyrotechnic, were the most feasible payload replacement, potentially offering a level of thermal persistence and combustion comparable or superior to that of white phosphorus. Livermore’s High Explosives Applications Facility (HEAF) provided the ideal environment for solving the project’s two biggest scientific questions—the thermite formulation optimal for agent defeat and the best way to initiate the thermitic reaction. Molitoris observes, “We have a great facility and diagnostics to get the work done, but the true beauty of HEAF is that all of us—experimentalists, physicists, formulators, chemists, modelers, and technicians—are working under the same roof. Our scientific interactions are increased, and we get much more accomplished. For this type of work, there really isn’t any other place like HEAF.”

The team has changed its approach over the years in response to the myriad challenges it has addressed. “Initially, we had to build specialized diagnostics to do the research, but now the effort is more about formulations and performance testing for specific applications,” notes Molitoris. Materials scientists Alex Gash and Octavio Cervantes have contributed heavily to recent work, as has formulator Mark Hoffman, whose expertise is in polymers and plastic-bonded explosives. Once Molitoris has formed the right team for a given application, the team determines what material properties will be required and formulates an initial set of viable solutions. Critical performance testing then feeds back into development of the formulation until they reach the best possible solution.

“Every time we make a material, we have to conduct performance tests to see how it behaves,” explains Cervantes. “In this case, we were able to gather the needed information with relatively simple tests.” The team began testing candidate formulas by igniting samples in horizontally positioned, clear plastic burn tubes. When initiated, a thermite’s metal fuel and metal oxide components undergo a self-contained and self-sustained chemical reaction, producing a burst of flame. The team used a high-speed camera to document how long and how well each material burned, but they soon determined that burn tubes were too chaotic an environment to make the required measurements. Instead, they developed a new vertical platform in which the test material is sandwiched between a cylindrical metal base and an igniter and burns from the top down. This test arrangement, which took nine iterations to perfect, proved more satisfactory for studying flame propagation and temperature gradients.

The more promising formulations were further evaluated in HEAF’s spherical firing tank, which is equipped with pressure and temperature measurement instruments and high-resolution optical and x-ray imaging capabilities. These experiments employed a cylindrical carbon fiber case—which x rays can easily penetrate—packed with a donut-shaped thermite payload around a core of high explosives. The high explosives and thermites were separated by a metal liner. During performance tests, the tank’s multichannel flash x-ray system (see S&TR, December 2004, X Rays, Detonations, and Dead Zones, and March 2006, The Shocking Truth about Detonations and Metals) captured a sequence of radiographs to document the dynamic response of the PAD payload, from detonation to full thermite initiation and dispersal. 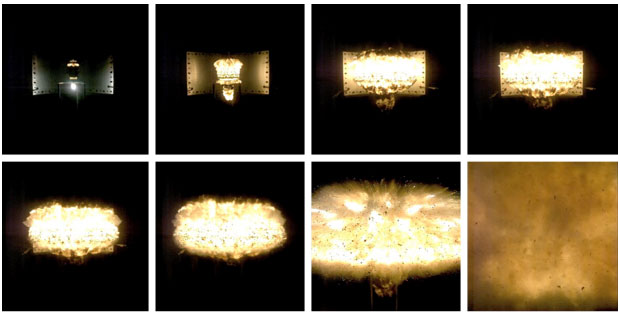 High-resolution images taken during firing-tank tests capture the evolution of a thermitic fireball. These images can be used to assess factors such as how efficiently the payload was initiated and dispersed. 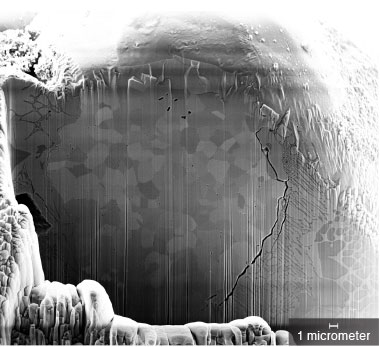 Staff and students at the Naval Postgraduate School have characterized burn residue to help the Livermore team better understand the thermite reaction mechanism. A magnified sample is shown.

A First for Thermites

With the firing-tank test results, the researchers settled on a formula and initiation method that was both efficient and effective, producing a fireball that is hotter and more persistent, with less overpressure, than is possible with white phosphorus. Subsequent lethality tests performed with surrogate agents confirmed that Livermore’s thermite payload was better at capturing and destroying its target than CrashPAD or other possible payloads. “Thermites were even more effective than we imagined,” Molitoris says. The sponsors were very pleased with the results, but they soon challenged Livermore to take the research a step further—to create a plasticized (liquid) thermite that offered similar or identical performance to the newly proven granular (solid) formula, for even greater safety and ease of handling. If successful, the new payload would be used in a new incarnation of Shredder, dubbed the Agent Defeat Penetrator.

In addition to an accelerated timeline of only 15 months, the project entailed a high degree of risk because of the failure of all previous attempts by others to plasticize a thermite. Nevertheless, the Livermore team accepted the challenge. Even with the HEAF team’s collective experience with formulating energetic materials, significant effort was needed to find a binder that, in just the right proportions, would produce a substance with the desired viscosity—like toothpaste or soft wax—and with a shelf life measured in years, all without hampering performance. The Livermore team evaluated possible formulas for performance, while NPS professors Joe Hooper and Young Kwon and their students shed light on the thermitic reaction by characterizing residue from stack burn and explosive tests and exploring the influence of the carbon fiber casing on performance test results.

During their experiments, the researchers noticed that plasticized thermites burned less intensely in stack tests than did regular thermites but performed exceptionally well in the HEAF firing-tank experiments. “We saw better and more realistic results under confined conditions—inside a container—than in the open conditions of the stack burn tests,” notes Cervantes. “Flash x rays at HEAF have allowed us to understand scientifically how confinement makes the system work better.” The team was ultimately able to deliver a plasticized thermite—the first of its kind—suitable for PAD weapons. The material met or exceeded all requirements in Livermore’s performance tests and also exceeded expectations in the lethality tests. This successful plasticization of thermites for agent defeat is what earned the team its 2016 WCI Gold Award.

As the Agent Defeat Penetrator project transitions to a new stage—payload formula optimization and larger scale testing—Livermore researchers will continue to lend their considerable expertise in energetic and advanced materials development and testing. In collaboration with NPS, the team will further enhance the formula’s properties by fine-tuning ingredient proportions, particle size, and material mixture. They will also lead scaled-up tests at the Laboratory’s Site 300 facilities. Molitoris says, “Scaling up can be one of the most difficult tasks because of the need to preserve not only the defeat mechanism itself but all the other properties of the thermite fill, including performance, insensitivity, gas production, amenability to cast curing, and shelf life.” If their two-decade track record in agent defeat research and development is any indication, Molitoris and his HEAF colleagues will surely rise to the challenge once again.