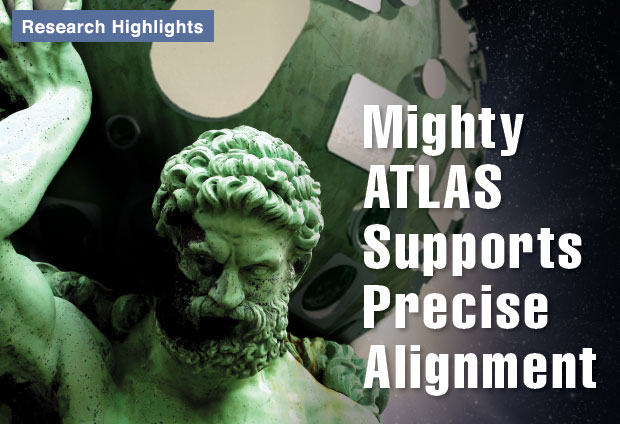 One of the most demanding aspects of preparing for an experiment at the National Ignition Facility (NIF) is reliably and precisely aligning the myriad components involved—up to 192 laser beams; the target containing the material to be studied and at which the beams are directed; and a variety of optical, x-ray, and nuclear diagnostics. For instance, even a slight misalignment of a diagnostic with the target could result in crucial data not being captured accurately. A particularly exacting and potentially time-consuming aspect of alignment is fine-tuning the diagnostic instrument manipulators (DIMs) located inside the 10-meter-diameter target chamber. Proper alignment—to a demanding tolerance of 0.1 to 0.5 millimeters—ensures that desired data are acquired by the incredibly sensitive diagnostic instruments inside the DIMs.

Traditionally, DIM alignment has been handled by two telescope- and camera-based alignment systems, known respectively as the opposed port alignment system (OPAS) and the chamber interior viewing system (CIVS). However, using these systems takes alignment operators up to an hour before every shot and requires manual interpretation of the alignment. To improve accuracy and repeatability, reduce maintenance, and provide greater flexibility in alignment configuration, NIF engineers have developed the advanced tracking laser alignment system (ATLAS). 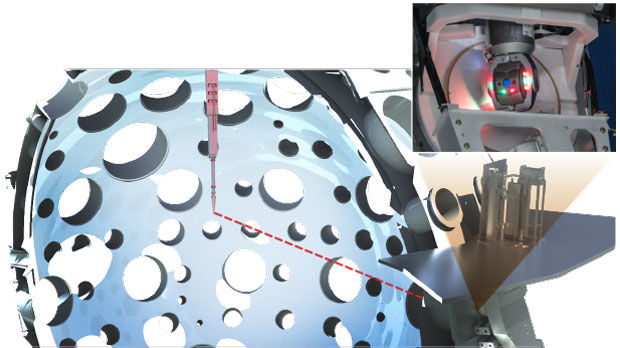 Although many NIF diagnostics are in fixed positions inside the target chamber, a critical subset of diagnostics can be moved in and out, allowing the configuration to be customized to each experiment. These adjustable diagnostics ride on DIMs and require a more precise level of alignment than the fixed diagnostics. For many years, NIF had three DIMs—two positioned at the target chamber “equator” and one situated at the chamber’s “north pole,” looking down at the target.

Previously, each equatorial DIM was aligned by a dedicated OPAS telescope located at a port on the opposite side of the target chamber from the DIM. This arrangement permitted a direct line of sight from the port to the diagnostic snouts and therefore facilitated alignment, including adjusting pitch (up and down) and yaw (left and right) angles. A particular challenge was aligning the polar DIM. An OPAS telescope could not be located opposite from the telescope because at the bottom of the chamber, instead of a port, is a two-person elevator for workers accessing the chamber. Consequently, NIF engineers used the CIVS video cameras, which provided a three-dimensional view of the polar DIM snout. However, these cameras were a temporary solution never engineered to be a precision alignment instrument. Hence ATLAS.

In parallel with ATLAS development, NIF engineers are adding two new manipulators in the target chamber, each capable of positioning both targets and diagnostics. The first new manipulator was installed in the NIF target bay in June 2016, and a second is scheduled for installation in 2017. The manipulators have their own diagnostics, which cannot be aligned with the OPAS or CIVS systems but instead rely on ATLAS.

ATLAS is also optimized to work with a new target alignment sensor, which, along with aligning the target and laser beams, ensures that the target is positioned in the exact center of the target chamber, so it can be seen by the surrounding diagnostics. The sensor is equipped with retroreflectors. These corner-cube mirrors act as reference points, telling ATLAS where the target will be. For every shot, ATLAS first measures the sensor to locate the target, after which, during alignment, the diagnostics are pointed at the target. 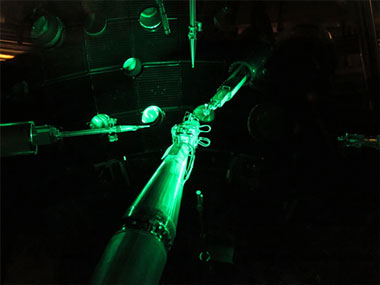 Target and diagnostic positioners inside the National Ignition Facility’s (NIF’s) target chamber are crucial to a successful experiment. An equatorial diagnostic instrument manipulator (DIM) enters from the left, and a polar DIM descends from the top of the chamber. NIF engineers have developed the advanced tracking laser alignment system (ATLAS) to streamline DIM alignment and improve accuracy and repeatability.

Diagnostic alignments using the previous camera-based systems were performed by skilled alignment operators who relied on visual features and overlayed graphical images to assist with measurements. These operators positioned DIMs with high accuracy despite variations in visual features caused by lighting conditions, past shot debris, and radiation-induced artifacts on the video camera sensors. Although effective, manual alignment consumed an operator for up to one hour for each shot. Alignment based on ATLAS relies solely on objective measurement data from a laser tracker, not on an operator’s skill or instincts.

Another key benefit of ATLAS is improved shot-cycle flexibility, reducing shot-cycle time and increasing overall efficiency. With the large field of view that ATLAS has from its perch above many of the equatorial manipulators, the system can measure DIMs even after the target has been aligned, whereas OPAS made it impossible to insert a target before the equatorial DIMs were aligned, because the target would block the line of sight through the target chamber center. In addition, ATLAS—including its polar DIM and manipulator diagnostics—takes up only a single port, in contrast to the multiple ports taken up by the previous telescopes and cameras.

During operation, the ATLAS laser tracker sends collimated low-power, eye-safe laser light across the target chamber to the DIM snouts. The tracker’s servo system steers the laser beam to center on the snout-mounted retroreflectors, which bounce back more than 90 percent of the laser light. The reflected light re-enters the tracker, which analyzes the distance and angle to the retroreflector, providing a three-dimensional point location. ATLAS measures a group of retroreflectors attached to the diagnostic snout to compute the pitch, yaw, and aim point of the snout. From the resulting measured location, the position of the DIM is adjusted so that the diagnostic will capture the desired view of the target. Finally, before the NIF laser beams fire, a shutter closes over the fused silica glass port window to shield ATLAS from debris. If an experiment will release large amounts of neutrons, which would freely pass through the metal shutter, the instrument is removed entirely from the target bay.

Compared to (a) the previous alignment system, the wide field of view afforded by (b) the ATLAS laser tracker permits faster and more accurate alignment of DIMs than was possible before. (Renderings by Max Rodriguez.)

Part of an Effort to Increase Shot Rates

NIF facility manager Doug Larson explains that ATLAS development goes back to 2011. Effort was refocused in 2014, when Congress mandated that the NIF shot rate be increased and operations be optimized over three years—without additional funding. A 120-day study identified 20 areas for improvement to NIF equipment and procedures that could reduce the time and effort for fielding experiments. To meet these goals, over 80 individual projects were launched. ATLAS was one of the largest of these projects. Larson says, “ATLAS represents the final commitment of the 120-day study.” (Another improvement was the new type of manipulator that can handle both targets and diagnostics.) In all, these and other improvements have roughly doubled the shot rate over a 2-year period, from 191 shots in fiscal year (FY) 2014 to 356 shots in FY 2015 and 417 shots in FY 2016.

ATLAS is expected to be fully commissioned by the summer of 2017 but is already being routinely used today to align the polar DIM. Lead ATLAS engineer Nick Shingleton says the new system is far exceeding the alignment tolerance of less than 500 micrometers, or half a millimeter. Shingleton explains that it is not surprising that ATLAS does a better job with polar DIM alignment, because the system was designed from the start as a precision alignment solution. 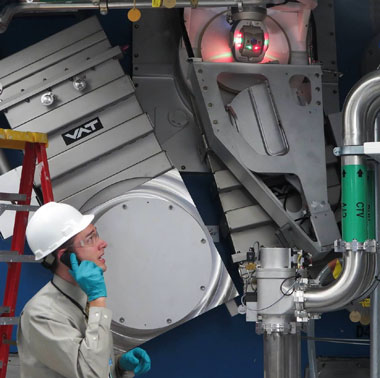 Control system software engineer James Hoffman monitors the operations of ATLAS, seen in the top right of the photograph.

Shingleton notes that an important part of ATLAS development was writing new software to incorporate the alignment system into NIF’s integrated computer control system, which governs every aspect of every shot. Several software engineering challenges had to be overcome, such as building a layer of front-end controls and seamlessly integrating the data captured by ATLAS into the overall system. As a result, all ATLAS alignment activities can now take place in the NIF control room. There, at special consoles, alignment operators oversee the collection and processing of ATLAS measurements and DIM alignment.

Although laser trackers are common in research and industry, ATLAS is unusual for propagating laser light through a glass window and into the target chamber vacuum, which causes the light beam to refract. Consequently, the raw measurements from the laser tracker must be compensated to account for this refraction and determine the true point. Compensation is performed automatically by an algorithm embedded in the control system, in a process transparent to users conducting the experiment.

Once fully commissioned, ATLAS will help ensure that NIF operations run smoothly and with ever-increasing efficiency, and that critical data are reliably acquired by some of the most sensitive and advanced diagnostic instruments in science. Resting on the solid shoulders of ATLAS, experiments furthering national security, fundamental high-energy-density research, and energy security will all greatly benefit.