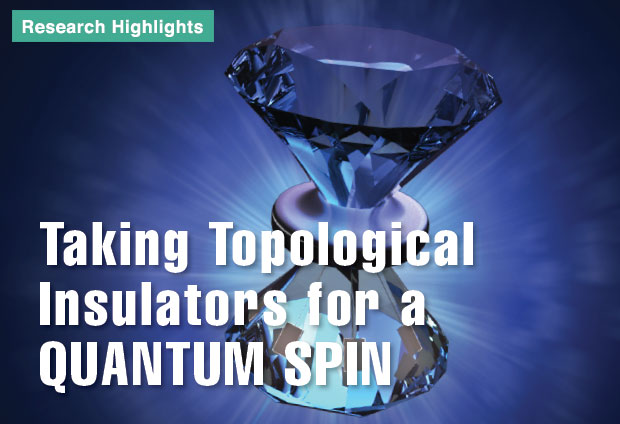 Materials can be categorized by their electrical conductivity—that is, the ease with which charged particles, electrons, can travel throughout the material. In conventional conductors (such as copper), the outer electrons of their atoms are loosely bound and require little to no additional energy to move from atom to atom and molecule to molecule. The electrons in semimetals and semiconductors (for instance, silicon) are more tightly bound to the nucleus of each atom—thus more energy is required to dislodge them—while the electrons in insulators (such as rubber) need the most energy to move freely. A topological insulator (TI) defies easy classification, however. It behaves like an insulator in its interior yet conducts electricity along its surface, despite having the same chemical composition throughout.

In a TI, an electron’s orbital motion around the nucleus of the atom interacts with its spin—a physical property similar to the clockwise or counterclockwise rotation of a planet around its own axis—such that spin and orbital motion are coupled. (When driven by an electric field, all of a conductor’s electrons will move in the same direction, independent of their spin; electrons in TIs with opposite spin move in opposite directions.) The coordinated electrons mostly end up revolving in place, but at the edge or surface of a TI, they form a current.

What truly sets these surface currents apart from those observed in conventional materials, however, is their topological properties. Topology is a broad field of study concerned with classifying the structure of an object. Imagine a donut made from Play-Doh: the donut has one hole, but it can be continuously deformed into a teacup with a handle, making these two objects part of the same topological class. Generating a donut from a ball shape, however, would require tearing a hole, which would put it into a different topological class. Similarly, the bulk electronic structure of a TI belongs to a topological class different than that of the air around it. The TI’s surface state connects these two disparate topologies. Any surface currents around the TI are very difficult to disrupt and possess high electrical conductivity because these surface currents derive from topology rather than the chemistry of the bulk materials.

With their special surface properties, TIs could be ideal building blocks for faster, cheaper, and more energy-efficient electronics, such as spin-related electronics. Called spintronics, these devices comprise a nascent field that aims to manipulate the spin state of electrons to represent ones and zeroes, instead of the presence and absence of electrons used in conventional computing. Researchers have also theorized that the collective motion of electrons inside TIs will give rise to several particles predicted by high-energy physicists, including chargeless Majorana quasiparticles, which could be harnessed for transmitting information in a practical quantum computer. These computers use the laws of quantum mechanics to perform calculations and are predicted to perform tasks such as database searches and code breaking exponentially faster than today’s binary computers.

Although potential TI applications are generating excitement in the research community, TIs have only been synthesized and studied experimentally since 2008—more basic and applied research will be needed before realizing any TI-based quantum devices. To this end, Lawrence Livermore scientists, with funding from the Laboratory Directed Research and Development Program, are currently investigating two aspects of these materials. Jason Jeffries’s team is using pressure to induce structural changes in TIs to better understand their properties, while Dongxia Qu is exploring the feasibility of using the TI surface current as a means of generating magnetic spins for spintronics. Qu’s and Jeffries’s work is poised to propel scientists’ understanding of these rather new and strange materials a quantum step ahead. 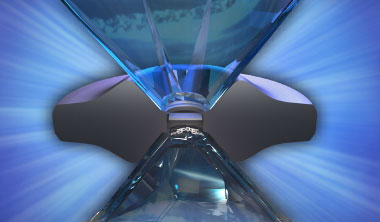 Livermore researchers used a designer diamond anvil cell—which features tungsten metal microcircuits fabricated on the 300-micrometer-wide polished tip of a diamond—to investigate the high-pressure behavior of different ratios of bismuth and telluride as topological insulators (TIs). A TI behaves like an insulator in its interior yet conducts electricity along its surface, despite having the same chemical composition throughout.

Jeffries and his colleagues are employing compression experiments to shed light on how the atomic and electronic structure of TIs relate to their electron transport properties. Their experimental data will be used to bolster modeling accuracy for these and similar materials. The team has explored pressure-related changes in a series of bismuth telluride materials at up to 50 gigapascals using two kinds of diamond anvil cells (DACs). Small mechanical presses, DACs enable researchers to observe and measure a material’s properties under extreme static pressures of up to 600 gigapascals and to vary those pressures slowly, over the course of many hours. (See S&TR, December 2004, Putting the Squeeze on Materials.) For structural studies, they loaded a standard DAC with bismuth telluride and performed x-ray diffraction experiments on it at Argonne National Laboratory’s Advanced Photon Source (APS). A designer DAC, which is equipped with metallic microprobes, was used to measure electrical resistivity and other transport characteristics. Jeffries explains, “Designer DACs let us really interrogate the electronic system at high pressure. For example, is it a metal or a semiconductor? And how exactly is it conducting?”

At standard (atmospheric) pressure, materials with different ratios of bismuth and telluride have distinct properties—for instance, one is a semimetal, while another is one of the best-studied TIs. When compressed, the various bismuth-based samples underwent multiple transformations, documented through both structural and electronic measurements. Eventually, they all transitioned to the same bismuth–telluride alloy, which is a superconductor (that is, a material that conducts electricity without resistance). Jeffries notes that such universal behavior from a material series under pressure is unusual and somewhat surprising, but studying it may help the team to understand the subtle variations that lead to TI and superconducting states in these systems.

Jeffries’s team has also investigated the TI samarium hexaboride at pressures up to 35 gigapascals. Samarium hexaboride is an ideal TI to study because the bulk of the material is truly insulating. Most other TIs have some internal current due to impurities within the material, and this current can interfere with measurements of the surface current. Using a standard DAC and various x-ray techniques at APS, they explored the material’s transition under pressure from an insulator to a conductor. For example, they used resonant x-ray emission spectroscopy to probe the local electronic configuration of atoms and better understand how the electrons responded to the transition. They found that unlike samarium sulfide, which is considered a rather analogous material, samarium hexaboride does not undergo an abrupt change in its electronic configuration as it transitions from an insulator to a conductor. This surprising result may indicate that the topological nature of the system varies continuously with pressure, which would have implications in TI applications. 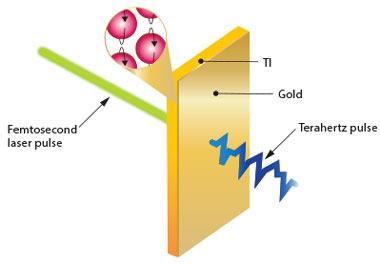 A spin-based terahertz emitter married to a TI layer is capable of greater bandwidth, for better imaging resolution in applications such as airport screening and medicine. In a process called spin injection, a 20-nanometer-thick TI is layered over a 2-nanometer-thick gold sample, and its surface is bombarded with a femtosecond laser pulse. Through the inverse-spin Hall effect, spin currents are converted to charge currents.

Qu has also probed the characteristics of bismuth-based TIs, but using magnetic fields and sensitive measurements rather than pressure experiments. To measure bismuth telluride’s quantum oscillations, she created a temperature gradient in a sample, exposed the sample to a strong magnetic field, and looked for variations in the resulting voltage. Studying these oscillations, which relate to surface electron transport behavior, helps to provide a better picture of the material’s electrical properties. She has also gauged the mobility of bismuth selenide’s surface electrons by precisely measuring its resistivity and conductivity. “Mobility is a measure of how long an electron can move around before it is scattered,” Qu explains. “The higher the mobility, the less chance that electrons will be scattered in the material.” She found that the mobility was very high and relatively impervious to material impurities, confirming the robustness of the TI’s surface current.

Qu’s latest work leans more heavily to the applied side. She is leading an effort to make a prototype compact terahertz radiation emitter for imaging applications through a process called spin injection. She layers a 20-nanometer-thick TI over a 2-nanometer-thick gold sample and bombards the surface of the TI with a femtosecond laser pulse. The laser energy creates a population of electrons with a predetermined spin speed and direction. These “spin-preprogrammed” electrons accumulate at the gold–TI interface and then diffuse into the gold, where they cause the gold electrons to move in unison. This mass behavior generates an electrical current, which, in turn, makes the TI–gold structure emit electromagnetic radiation—a manifestation of a phenomenon called the inverse spin Hall effect, by which spin currents are converted to charge currents. The emitted radiation can be measured and analyzed with the help of a specially developed terahertz spectrometer.

The resulting device has demonstrated broader bandwidth and higher energy emissions (20 terahertz instead of 3 terahertz) than other spin-injection methods can produce, which could enable, for instance, higher resolution screening for airports and medical uses. Other potential applications include radar, basic science research, and wireless communications. Qu and her colleagues are aiming to develop a practical, fiber-laser-pumped, terahertz emitter within the next year.

Qu’s process offers several advantages over the standard method for controlling electron spin, which uses magnetic fields and materials. “With normal ferromagnetic materials,” she notes, “we align the spin using a magnetic field and then inject spin in a normal semiconductor. But if we inject current with a TI, the spins automatically align in one direction, without a magnetic field.” Furthermore, TIs are more efficient at generating spin—that is, they can make the electrons spin faster—and the process allows researchers more control over the electrical and spin properties of the resulting device, through tuning of the laser pulse properties. Her work thus offers a promising avenue for the development of other spintronic devices.

Despite a few years in the scientific spotlight, TIs remain somewhat elusive materials. Their properties can be difficult to observe, and many of their applications remain more in the realm of conjecture than reality. Efforts such as Jeffries’s and Qu’s, however, represent appreciable progress toward the characterization and utilization of TIs, which benefits Livermore investigations into quantum computing, spintronics, device physics, materials science, and even actinide science.