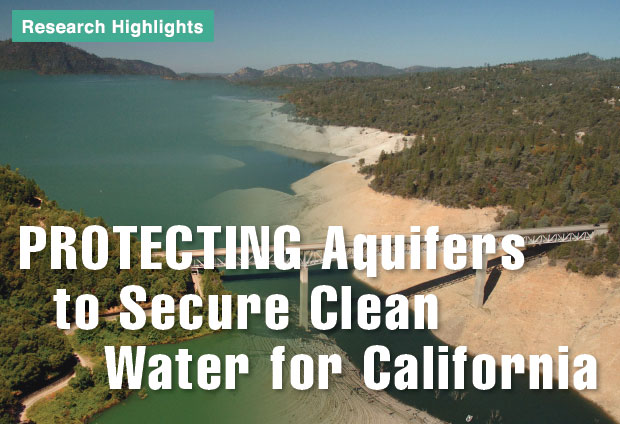 (bottom right) The dramatically lower water level at Lake Oroville, California, compared to (top left) a few years ago is just one example of a statewide trend—drought conditions that make it more important than ever to secure clean, reliable supplies of water.

More than half of California’s drinking water comes from aquifers—underground reservoirs of water that are recharged when rain and snowmelt percolate down through the soil. California has hundreds of aquifers, ranging from 1 to 90 square kilometers in surface area. Now in the midst of a multiyear drought, however, the state is facing a serious challenge as it tries to ensure ample water supplies. Reservoirs for a time had dipped below half of their historical levels, with precipitation far below average and even snowpack levels, which traditionally provide significant water storage, drastically low. Furthermore, many shallow private drinking-water wells are being abandoned because of increased use of the surrounding groundwater, primarily by farmers, to the point where the falling water table leaves the well “high and dry.”

Securing clean water is another sobering concern for Californians. Groundwater from aquifers and wells provides 40 percent of the state’s total water supply in a normal year, but in addition to changing precipitation patterns, contaminants also threaten California’s precious water sources. As pristine underground aquifers are consumed at an increasing rate, water quality—not just quantity—must be addressed.

A team of Livermore researchers with expertise in isotope geochemistry is developing new methods to help characterize California’s underground aquifers. Using naturally occurring and anthropogenic radioactive isotopes, they can determine when the water was recharged from surface water that percolated down through the soil and into the aquifer. This recharge time, or “water age,” is helping Laboratory researchers determine the source of contaminants and the flow of groundwater. Researchers also use the isotopic composition of pervasive pollutants, such as nitrate, to determine the source of contamination.

Past GAMA Special Studies program research focused on gaining a better understanding of the source and transport of nitrate contamination in drinking water aquifers. Current research efforts focus on meeting persistent needs in California water resource management by identifying appropriate areas for managed aquifer recharge in response to the drought and developing new age tracers to permit the use of treated wastewater. Esser’s team of four researchers is developing methods to characterize the different age components in a single groundwater sample. The team also provides groundwater age data to the GAMA Priority Basin and Shallow Aquifer Assessment, a statewide monitoring program led by USGS. The State of California funds these efforts. 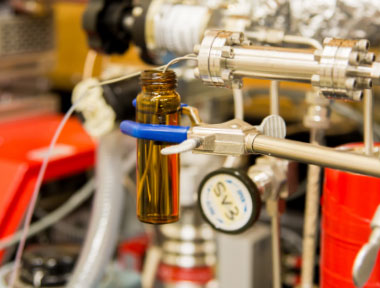 The noble gas membrane inlet mass spectrometer (NG-MIMS) is a simple benchtop instrument developed at Livermore to measure dissolved noble gases in water samples. For instance, NG-MIMS can detect the arrival of introduced xenon to establish the underground travel time of water.

Laboratory researchers can determine the source, history, and likely fate of contaminants in groundwater from factors such as groundwater age and isotopic composition. When studying contaminants such as nitrate, researchers also look for the presence of their degradation products. These measurements indicate whether the contaminant is natural, whether it results from past events or ongoing activities, and whether it is being naturally degraded in the aquifer, for instance. In addition, water age can be used to identify vulnerable aquifers and wells. Younger waters have had less time in the subsurface for filtration and the breakdown of harmful compounds.

Although compounds such as nitrate occur naturally and are essential to life, their intensive use in the modern age has led to the harmful contamination of groundwater. “Post–World War II industrialization of irrigated agriculture and animal operations in California has been a major source of contamination,” says Esser. Younger waters are also more vulnerable because of the dramatic increase in nitrogen loading in California since World War II. The use of synthetic nitrogen fertilizers and the size and number of confined animal feeding operations, such as dairies, increased dramatically in the last half of the 20th century. Therefore, groundwater recharged over this time is more likely to contain anthropogenic nitrogen than is older water.

“Water managers want to know if the water is renewable or nonrenewable, and how vulnerable it is to contamination,” says Esser. “If you are tapping water that is thousands of years old, then you are mining precious, nonrenewable groundwater. If you are using water that is ten years old, then you know it’s recharging and therefore is renewable,” he explains. “On the other hand, younger water is more vulnerable because contaminants are more widespread now than one hundred years ago. So we have to try to determine whether, say, the nitrate we are seeing today is a result of some activity that is happening at the surface now or that happened decades ago.”

Esser explains that water age is a complicated concept because water produced by a well doesn’t have a single age. Large wells may access groundwater from more than one aquifer, and the same well can be fed by both younger and older water sources. The challenge is figuring out how to pull that information apart and use it to determine both the history and the future vulnerability of the water and its contaminants.

California’s Groundwater Ambient Monitoring and Assessment (GAMA) program uses multiple tracers to determine the age of groundwater, including tritium (3H), radiocarbon, radiogenic helium-4 (4He), and krypton-81 (81Kr). Livermore’s GAMA team is also developing krypton-85 (85Kr) as a tracer for dating “modern water” and both sulfur-35 (35S) and xenon (Xe) as tracers for recent recharge, that is, water less than two years of age. Under a project supported by the Laboratory Directed Research and Development Program, the team is also developing sodium-22 (22Na) as a tracer of modern groundwater of intermediate age (2–10 years).

Livermore’s GAMA-related program tests groundwater using a number of tracers that tell how long the water has been in the subsurface. Xenon, a noble gas, and sulfur-35, a radioactive isotope produced naturally, are among the latest tracers that the GAMA group uses to test groundwater that is weeks to months old. Xenon is introduced to a recharge pond or injection well and then detected at a monitor or production well using a noble gas membrane inlet mass spectrometer—a simple benchtop instrument developed at Livermore. The time between introduction and first detection is related to groundwater age. Sulfur-35 is measured in groundwater samples after preconcentration from large-volume water samples using a method also developed at Livermore. The radioactive decay of sulfur-35 can be used as a clock to determine groundwater age.

The team is also developing krypton-85 as a tracer to complement Livermore’s signature tritium tracers, used to determine the mean age of “modern water”—water aged less than 50 years. Tritium, an isotope of hydrogen, is naturally produced in Earth’s upper atmosphere by cosmic rays. In the early 1960s, atmospheric nuclear testing introduced a large amount of tritium into the atmosphere. Today, many public drinking water wells in California produce water with measurable tritium. Water recharged before 1950, however, does not contain tritium. Krypton-85 has a similar half-life to tritium and is released into the atmosphere through the reprocessing of nuclear fuel. Although tritium’s atmospheric concentration has been falling over the last several decades, the atmospheric concentration of krypton-85 has been rising. The use of these tracers can permit the determination of not only the average age of modern water but also the ratio of modern to “pre-modern” water.

The Laboratory is one of two high-throughput noble gas mass spectrometry laboratories in the nation with the capability to measure tritium and noble gases. Through the GAMA Priority Basin program over the last 10 years, USGS and Livermore have provided the California Water Board with thousands of groundwater ages. Esser notes, “We’re just beginning to understand where we are pumping out very old groundwater, which recharges too slowly to be considered a renewable resource, and where the very young groundwater is present, indicating an area suitable for managed aquifer recharge.” 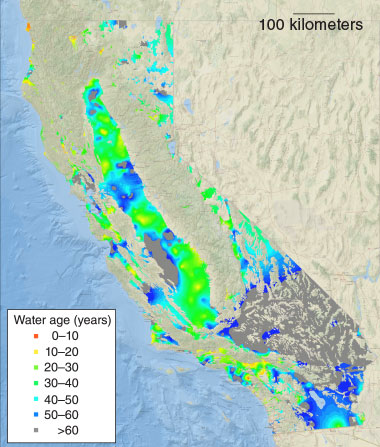 The GAMA program has so far determined the age of over 4,000 California groundwater samples using tritium as a tracer. A map graphically represents the results of 2,589 samples. Of these, 1,630 samples—or 63 percent of the total—had a mean groundwater age of approximately 60 years, indicating California’s reliance on relatively old water that is replenished slowly.

Over the past 15 years, Livermore has been a strong ally to California in managing groundwater resources. In response to the discovery of methyl tertiary-butyl ether—a gasoline oxygenate released into groundwater from leaking underground fuel tanks in California drinking water wells in the late 1990s—Livermore developed Geotracker, a geographic information system database that tracks the proximity of drinking water wells to leaking underground fuel tanks. Livermore proposed that groundwater age could be a simple metric to identify wells that were particularly susceptible. This research led to the establishment of the California Aquifer Susceptibility program, a partnership between the California Water Board, USGS, and Livermore from 2000 to 2003.

In 2003, Livermore’s Laboratory Directed Research and Development (LDRD) Program funded an Esser-led investigation of nitrate biogeochemistry and reactive transport in California groundwater. The Laboratory was an influential force behind the California Water Board’s decision to establish the GAMA Special Studies program in 2003. The tools developed in the course of that program were used in subsequent state-funded Special Studies projects.

Currently, Livermore scientist Ate Visser is leading an LDRD-funded project to track water through the “critical zone”—the thin layer of vegetation, soil, and sediment overlying groundwater aquifers—to assess drought vulnerability. This collaboration between Livermore, the University of California at Merced, and the Colorado School of Mines will develop new tracers and technologies to better characterize the water cycle at the surface and in the subsurface.

“Water is a national security issue,” states Esser. “Both for residential use and for agriculture, we need water to live and to maintain farming systems.” Although California remains the immediate focus of Esser’s efforts, Livermore’s tools and methods are applicable throughout the country and beyond.