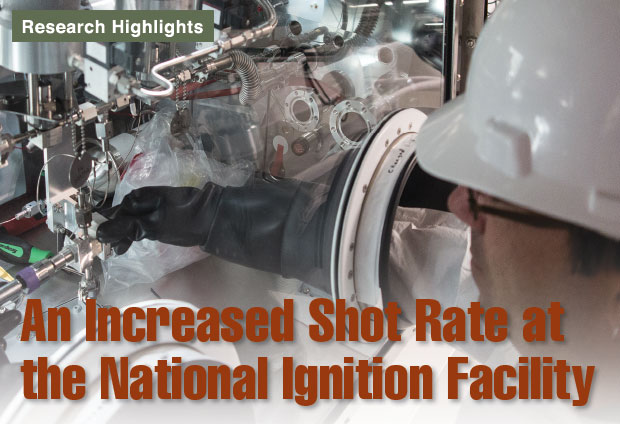 Systems operator Erik Mertens installs a fuel reservoir prior to a cryogenic layered ignition shot at the National Ignition Facility (NIF). A design change using an external fuel reservoir reduces the effort required to prepare the target positioner for these shots.

Nestled against the eastern slopes of the Livermore Valley lies a one-of-a-kind engineering marvel that brings the cosmos to Earth. The National Ignition Facility (NIF) at Lawrence Livermore is a cornerstone of research that maintains the nation’s nuclear weapons stockpile without full-scale testing. With its 192 laser beams, NIF can replicate the extreme conditions inside nuclear weapons, allowing scientists to examine thermonuclear burn in a controlled setting.

In 2012, an appropriations bill passed by Congress mandated that Livermore managers develop strategies to increase the number of NIF experiments, or shots, performed each year. In response, the Laboratory is updating the facility’s operations and procedures to streamline the turnaround time between experiments. The increased shot rate will allow stockpile stewardship research to advance more quickly and will enhance NIF’s utility as a uniquely capable user facility for other national-security applications and high-energy-density (HED) science experiments.

To understand how changes to NIF operations would affect research teams, the Laboratory conducted a series of meetings, conference calls, and site visits to discuss various options. These discussions, part of a 120-day study requested by the National Nuclear Security Administration, brought together 80 experts from Sandia and Los Alamos national laboratories, the University of Rochester, and other organizations involved in HED research. “The engagement from contributors was fabulous,” says NIF Director Mark Herrmann. “I think it’s a testament to how much the community cares about NIF’s evolution. People really took the time to provide valuable feedback.”

The study highlighted several opportunities to increase efficiency throughout the lifecycle of a NIF experiment. One major change targeted the facility’s scheduling approach. “We used to schedule experiments on a shot-by-shot basis, which meant that project teams tried to gather as much information as they could from a single shot,” says Doug Larson, NIF facility manager and a coleader for the 120-day study. “Users wanted to maximize the amount of data they retrieved in every experiment, which meant that designing a single shot and configuring its setup were time- and work-intensive.” Researchers at the University of Rochester’s Laboratory for Laser Energetics recommended that instead of specifying a number of shots for each project, schedulers allot time to a research team. Such an approach motivates team members to design experiments to maximize the scientific output for a given block of time.

Peg Folta, acting director of the NIF User Office, points to this new scheduling philosophy as a major contributor to the increased shot rate. “The new approach gives teams incentives to determine which shots they should match together to optimize their allotted time.” Since different shot configurations demand changes to NIF’s calibrations, pairing shots with similar configurations improves efficiency, which equates to more experiments within the set time. 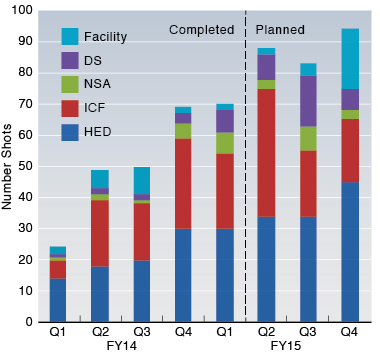 Managers at NIF are also streamlining review procedures for experiments. Because of the facility’s specialized equipment, experiments must be designed to yield the desired data without harming NIF components and diagnostics. “We identified areas where we could make it easier for scientists to work with the facility without reducing the quality of the experiments,” says Larson. Expert groups were established to provide researchers with iterative feedback about target materials, laser energy, pulse shapes, and diagnostic instruments. In addition, the NIF team assembled recommended platforms that researchers can use to scaffold experiments. By implementing one of the standard platforms, project teams sidestep the time-consuming process of evaluating configurations for their experiments.

Workflow tools were also developed to guide teams throughout an experiment, from proposal submission and project reviews to experiment scheduling and data analysis. “We evaluated the entire experimental lifecycle to improve day-to-day activities for everyone,” notes Folta.

Online user forums were launched so researchers can ask questions and provide feedback to each other. NIF managers also communicate administrative decisions via the forums. “We’re increasing the visibility of our choices about NIF’s new capabilities,” says Larson. “We want to improve transparency so users understand why we prioritize certain capabilities at certain times.” To date, NIF has added enhanced diagnostic tools, equipment, target materials, and laser alignments. “We’re also building a third target positioner,” says Larson, noting that another retractable arm for holding targets in place will allow for even faster shot turnaround. 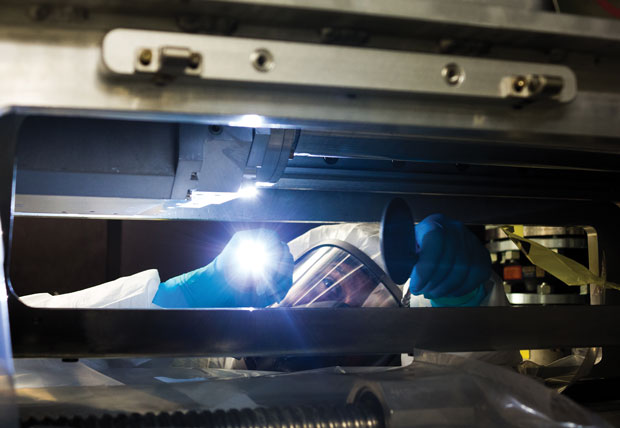 A target area operator wearing personal protective equipment checks the installation of a diagnostic cart for an upcoming NIF experiment. Reconfiguring the target diagnostics is a critical step in setting up experiments. Streamlined operations have helped reduce the turnaround time between shots. (Photograph by James Pryatel.)

In addition to having a third target positioner, the 120-day study team identified a need for more efficient target fabrication. “More shots means more targets,” explains Larson. Experimental success depends on the details of a target’s design and fabrication. As researchers learn from their experiments, they will want not only more targets but also targets with a greater variety of features. The target fabrication team, which includes colleagues from other national laboratories and industrial partners General Atomics and Schafer Corporation, has implemented improvements to increase the efficiency of target design and production.

Designs vary from highly complex and precise cryogenic targets to those for experiments at room temperature. The most complex cryogenic targets require a layer of hydrogen “ice,” which must be grown on a target prior to an experiment. This process takes several days and ties up one of NIF’s two target positioners. Once the third positioner becomes operational, researchers will be able to perform successive room-temperature and cryogenic tests on two alternating arms while waiting for ice to form on targets held by the third positioner.

New facility maintenance procedures also improve efficiency. In conjunction with time allotments for experiments, NIF’s managers schedule two-day maintenance windows each week with specialized teams assigned to maintenance operations. This decision to designate the facility’s focus as “shot mode” or “maintenance mode” mirrors the approach used by the Laboratory for Laser Energetics and by the U.S. military.

A markedly successful innovation was to adopt the Formula One model for the NIF operations team. The team now follows task-driven staging and implementation procedures in much the same way that pit crews work at Formula One car races. With this approach, the NIF team can prepare for the next scheduled shot while experiments are in progress. Operators can thus reconfigure the shot setup between experiments more quickly, which reduces laser downtime. Says NIF Operations Manager Bruno Van Wonterghem, “We’re beginning to see the effects of these improvements in early completion of the shot week. We’ve even had time to complete a few ‘opportunity shots’ beyond those originally planned for the week.” 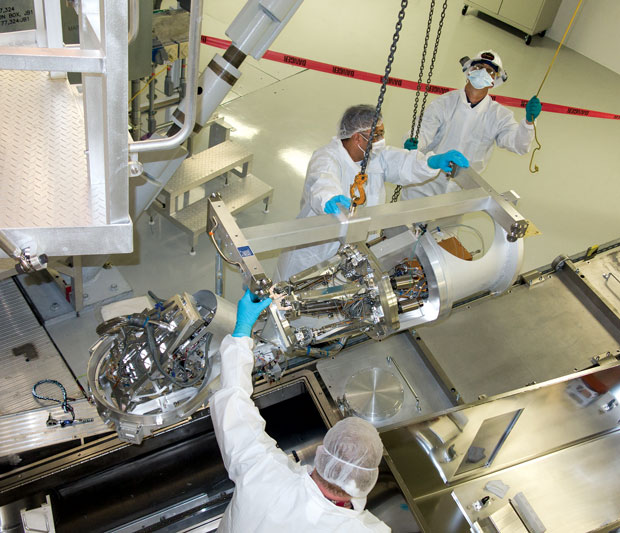 On Target for Success

According to Larson, NIF is on schedule to complete 300 shots in fiscal year (FY) 2015. With the capabilities to be added in the coming year, NIF will likely achieve 400 shots in FY 2016—roughly double the number in FY 2013. Larson notes that the entire staff at NIF is proud of these accomplishments and continues to search for new efficiencies. “We’re pulling out all the stops to increase the value of the facility for our sponsors and to better support stockpile stewardship,” he says.

Mark Herrmann agrees. “NIF can create the extreme pressures and temperatures required to examine the operation of modern nuclear weapons,” he says. “By doing more experiments, researchers can learn at a faster rate and apply those lessons to maintaining the nation’s nuclear deterrent. NIF users working on other national-security applications and HED science experiments will also benefit from high shot rates.”