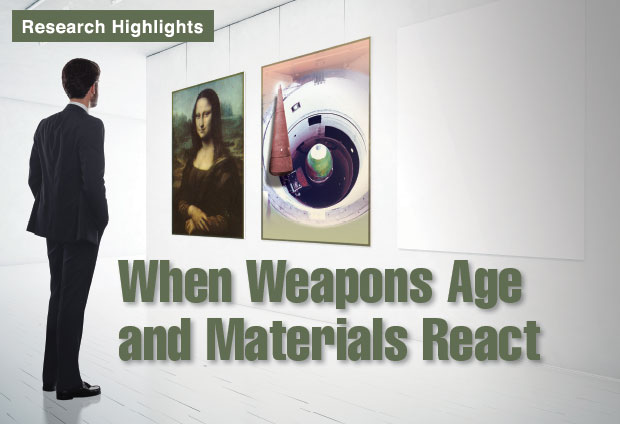 Priceless works of art, such as the Mona Lisa, and nuclear weapons systems rarely have anything in common. But as it turns out, research into how materials in close contact in a sealed environment react with each other and change can be important for both art preservation and stockpile stewardship.

Ensuring a safe, reliable, and secure nuclear deterrent requires scientists to understand weapons performance and the technical issues related to how these systems age. To more closely examine the fundamental chemical transformations that contribute to component aging, Livermore scientists Elizabeth Glascoe, Yunwei Sun, and Stephen Harley have developed a reactive transport model for assessing the compatibility and chemical kinetics of materials inside nuclear weapons systems.

Reactive transport codes are typically used to model chemical reactions and fluid transport through a medium. “Reactive transport is important in any application where materials in contact with one another react and change over time,” says Glascoe. For stockpile stewardship applications, the codes need to model gas sorption as opposed to fluid transport. “In aging weapons assemblies, the chemical compatibility of the materials is an integrated process of outgassing, sorption, mass transport, and chemical reaction kinetics,” says Glascoe.

With funding from Livermore’s Laboratory Directed Research and Development Program, Glascoe and her team have produced a novel computational code and experimental capability that can predict material aging, compatibility, and headspace gas composition for any geometric assembly of materials. “For our purposes, simple diffusion models would have been too rudimentary,” says Glascoe. “We had to develop more advanced mathematical models that incorporate sorption, diffusion, and chemical kinetics to achieve these results.” The team’s model will better predict the long-term behavior of weapons materials and allow scientists to develop more robust system components and nondestructive surveillance capabilities for managing the stockpile. 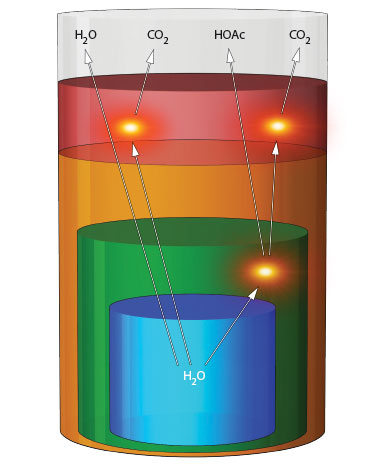 Livermore’s reactive transport model predicts material incompatibilities and material outgassing in sealed assemblies, such as a nuclear weapon. In validation experiments, materials are layered in a sealed vessel and aged. Moisture (H2O) in the base layer diffuses through the assembly, reacting with other materials to produce gaseous products such as carbon dioxide (CO2) and acetic acid (HOAc). (Rendering by Kwei-Yu Chu.)

In any sealed container, including weapons systems, the headspace is the area at the top of the vessel that is not occupied by a solid. If multiple materials housed in the same container begin to react with one another, the headspace can fill with gases produced as the chemicals comprising those materials transform. The new gases may then attack the materials, causing them to degrade more quickly. Over time, what began as seemingly minor material incompatibility could result in substantial damage to the entire system. “Our goal was to develop a predictive model that answered three main questions: where are the gases in the headspace from, why are they there, and are they a problem?” says Glascoe. “By analyzing the headspace gas spectrum, we can identify what are considered normal conditions for a weapons system.”

Using the MATLAB code, the researchers configured their own mathematical and physics models to simulate reactive transport and chemical reaction kinetics while accounting for sorption—how substances become attached to another—and transport—how the materials diffuse through one another. The reactive transport model simulates different sorption mechanisms and incorporates physics-based finite-element models, uncertainty quantification, and sensitivity analysis techniques. One equation is used to model absorption, via Henry’s Law, in which a gas is taken in by another material and fills in that material’s void space. Another equation accounts for Langmuir adsorption, wherein the gas adheres to a material’s surface.

“When the concentration of gas molecules is high, Langmuir or Henry sites may nucleate the growth of larger multilayer clusters that cause the gas molecules to pool,” says Glascoe. “We developed a third equation to model pooling concentrations.” Together, the three equations help the team visualize the contributions of each sorption mechanism and the kinetic exchange between them.

When running the models, the team used a Laboratory-developed software toolkit called PSUADE (Problem-Solving Environment for Uncertainty Analysis and Design Exploration) to perform uncertainty and sensitivity analysis. PSUADE works well for models with a large number of parameters and complex constraints, such as in this study, which required more than 10,000 simulations to determine the optimal parameters and parameter sensitivities for one material. By integrating PSUADE into the model, the team determined the sensitivity of eight parameters, including diffusivity, desorption rate, and porosity for the materials tested.

Three sorption mechanisms (Henry’s Law absorption, Langmuir adsorption, and pooling) dictate the rate of chemical uptake and outgassing in, for example, a silica-filled poly(dimethylsiloxane) material. Understanding these mechanisms is critical to developing a reactive transport model that can predict component aging and material compatibility accurately in a system. (Rendering by Kwei-Yu Chu.)

The researchers conducted experiments concurrently with the model development efforts. “We decided to build the capabilities together so we could ensure a good bridge between experiments and modeling and verify the code’s accuracy as we progressed through the study,” says Glascoe.

Initial experiments characterized such variables as sorption and transport parameters as a function of relative humidity and temperature. The team started with a quasi-one-dimensional (1D) sample material in a temperature-controlled chamber. “We systematically adjusted the relative humidity and monitored the sample’s mass changes over time,” says Glascoe. “If the sample gained mass, then moisture was being sorbed into the material. If the sample lost mass, the process was desorptive.”

Experiments were performed over a wide range of humidities and temperatures. The time-dependent behavior of the material provided information about the sorption and transport properties. With the input, researchers were able to use the physics-based mathematical model to determine the sorption and transport parameters and mechanisms. They then used the parameterized model to predict material response under different conditions and different geometries. Data from the 1D experiments will be extrapolated to build a 3D model.

Results from the validation experiments are being compared to model predictions to ensure the model’s fidelity. For the experiments, the team layered different materials inside tightly sealed vessels. Water was the base vapor because it is an aggressive reactant. Materials were chosen based on their reactivity to water vapor and the time for those reactions to occur. Glascoe says, “We wanted materials that would react with the water vapor in a fairly short time and produce outgassing signatures.”

During the experiments, tiny sensors measured the relative humidity and temperature inside the containers. The parameterized model also simulated the validation experiments. When a model’s predictions match experimental results, researchers have confidence in using the model to examine more complicated assemblies, such as a weapon. “Our preliminary validation experiments showed that we accurately predicted both uptake and outgassing,” says Glascoe. “We successfully developed an advanced predictive capability by executing a coordinated, simultaneous effort of all three aspects of our approach— experiments to characterize materials, model development, and validation experiments.” 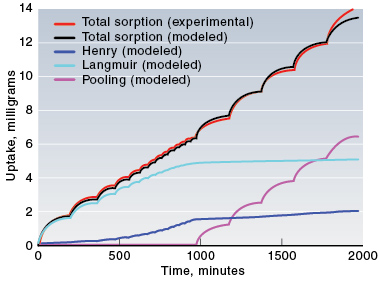 Experimental results are used to parameterize the mathematical model and characterize the mechanisms of sorption.

From Weapons to Art

Accurate predictions of material compatibilities as a function of age are important in various fields, from designing aerospace components and medical devices to preserving works of art. Some chemical reactions between materials in sealed environments may be benign, but many of them will cause damage and loss of material functionality. Glascoe says, “Through this project, we have created an integrated, versatile capability to better analyze headspace gases in different weapons systems.” The team is now working with other Laboratory programs to improve the model and begin using the capability for real applications.

According to Glascoe, the success of this project is another example of what can be accomplished through a multidisciplinary approach to building capabilities. “At the Laboratory, we can collaborate with experts in many fields from physics to engineering to computational modeling,” she says. “Livermore also has the resources and a team approach that is critical to making key advances in many areas of national importance, including stockpile stewardship.”