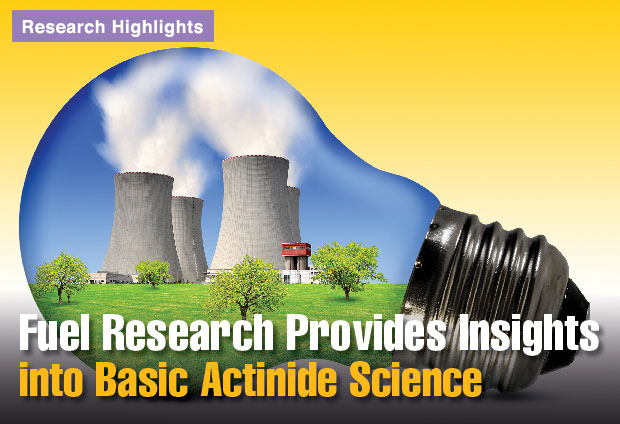 Developing new fuels for nuclear power plants is a dynamic business. Since the first nuclear power plant delivered electric power in the early 1950s, scientists have been searching for ways to improve the performance of fuels so that they burn more completely, thereby reducing radioactive waste and the risk that fuel could be used as a weapon. The March 11, 2011, disaster at the Fukushima Daiichi Nuclear Power Plant in Japan following the Tohoku earthquake and tsunami has increased concerns about the safety of nuclear energy. Nevertheless, it remains an integral part of the world’s energy mix and accounts for 20 percent of the electricity generated in the U.S.

Despite 60 years of experience, improving fuel utilization, or burnup, has progressed slowly. The earliest reactors converted about 2 percent of their fuel into fission energy before the remaining material was identified as spent nuclear fuel. The conversion rate for current nuclear power reactors is at most 4 to 5 percent. Researchers are developing a new class of fuels, known as ultrahigh burnup (UHBU) fuels, to increase the burnup rate at future reactors to 10 percent or perhaps even 20 percent.

Over the last three years, physicist Patrice Turchi in Livermore’s Physical and Life Sciences Directorate has been refining the scientific methodology to accelerate the development of UHBU fission fuels. His team, which is funded by the Laboratory Directed Research and Development Program, includes experimentalists Luke Hsiung, Joseph McKeown, Michael Fluss, Mark Wall, Scott Tumey, and Thomas Brown and simulation experts Jean-Luc Fattebert, Alexander Landa, Vincenzo Lordi, and Per Söderlind. The project builds on Livermore’s expertise in the actinide elements (those with atomic numbers 89 through 103) and focuses on uranium and plutonium. The team’s goal is to understand how the stability and microstructure of these radioactive elements evolve when they are mixed with other materials in both normal and irradiated environments. Such information will help nuclear engineers create mixtures with higher confidence in a new fuel’s performance and longevity.

To date, the project team has worked in various Livermore facilities, synthesizing and characterizing minute quantities of radioactive specimens and exposing them to a process of accelerated aging to study their continued performance. The researchers also used the Laboratory’s high-performance computers to simulate structural changes that occur in the actinide-based mixtures over time. In collaboration with Texas A&M University, they examined more than a dozen actinide–metallic alloys.

A Close Look at Fuels

Top requirements for next-generation power reactors are optimizing nuclear fuel usage and minimizing waste, while making fuels more resistant to proliferation. In commercial reactors, as the uranium fuel burns, it constantly “breeds” plutonium, which is a major component of the spent nuclear fuel. These heavy elements are continuously fissioning, leaving behind fragments of many other elements, which are called fission products. The chemistry of the complex fuel mixture evolves with time, and the concentration of fission products increases. Innovations in nuclear fuels focus on making optimal use of the uranium fuel as well as the plutonium and fission products, burning them up as much as possible to limit the radiotoxicity of the waste produced and reduce the potential for nuclear proliferation.

Inert matrix fuels show promise for improving burnup. These fuels have an actinide fuel kernel (a mixture of uranium with silicon or a metal such as molybdenum, niobium, or zirconium), an inert metallic matrix (such as a zirconium-based alloy), pores, and cladding materials for fuel containment. Experiments to date demonstrate that inert matrix fuels are highly resistant to irradiation and damage effects. The thermal conductivity of these fuels is also higher than it is in oxide-type fuels, which guarantees high heat transfer. Plus they protect against interactions with the cladding. In addition, says Turchi, “Inert matrix fuels represent an ideal system for conducting fundamental science research because each of the fuel’s components can be studied separately.” 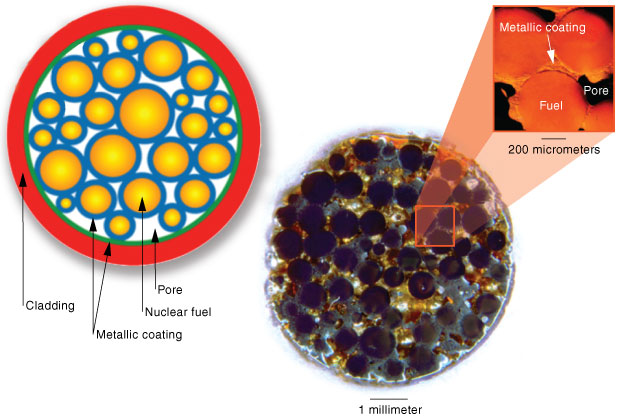 A schematic (left) illustrates the components of an inert matrix fuel rod for nuclear power plants, including the outer cladding, an inert metallic coating, and nuclear fuel spheres. A mock inert matrix fuel (lower right) was fabricated for demonstration purposes using zirconium spheres as a fuel surrogate. The metallic coating is made of a zirconium-based alloy, and a stainless-steel cylinder provides the cladding. A higher magnification image (inset) shows the alloy coating the fuel spheres, which is important for high thermal conductivity, and porous regions, which accommodate fission gas during the reactor’s operation.

As part of the UHBU study, the Livermore researchers worked on developing computational techniques to predict the behavior of the new fuels. In the process, they broke new ground for nuclear materials science. Having a predictive capability is tremendously useful in guiding experiments, which are costly, and in further validating experimental results. Prediction demands accurate models whose results successfully stand up against empirical data. Part of the team’s work, therefore, focused on quantum mechanical modeling—which examines the behavior of electrons—to compare simulated results with data from laboratory experiments.

An early study of zirconium-based actinide fuels, performed with colleagues at the Royal Institute of Technology in Stockholm, Sweden, showed excellent agreement between predicted energetics and experimental data. Later studies on a collection of molybdenum-based fuels, which examined how heat and magnetism influence the alloys, found similar agreement. Subsequent modeling focused on actinides—uranium, neptunium, plutonium, and americium—mixed with each other or combined with metals such as titanium, niobium, tantalum, and tungsten.

Results from the quantum mechanical studies provided input for assessing the mixtures with the CALPHAD (calculation of phase diagram) approach. CALPHAD efficiently describes the thermodynamic properties of all phases in a system. It also predicts the phase diagram of a fuel mixture, producing a graph of temperature versus composition to illustrate the stability of a material’s various solid phases and its liquid and gas states.

Phase diagrams are the basic road maps for designing alloys and understanding their behavior. They provide valuable information for material designers because structure controls a material’s properties and hence its performance. The real power of the Livermore methodology has been in predicting phase diagrams for multicomponent systems, including molybdenum–uranium–zirconium, molybdenum–plutonium–uranium, and even four-element combinations such as aluminum–molybdenum–silicon–uranium.

In experiments with researchers at Texas A&M University, the Livermore team characterized cast uranium–zirconium specimens using various experimental techniques such as x-ray diffraction, scanning electron microscopy, and TEM. Energy-dispersive spectrometry allowed the team to examine the local composition of nanometer-scale phases in each specimen. With these data, the team confirmed the coexistence of two equilibrium phases (alpha-phase uranium and delta-phase uranium–zirconium) at room temperature, representing the first experimental confirmation of this two-phase phenomenon in an as-cast, uranium-rich uranium–zirconium alloy.

The experiments with cast alloys were primarily focused on assessing the thermal stability of the specimens prior to irradiation studies at Livermore’s Center for Accelerator Mass Spectrometry (CAMS). A major challenge in studying the evolution of a nuclear fuel is the years required to irradiate a fuel in a reactor and measure its changes. At CAMS, researchers can emulate the consequences of accumulated fission damage by implanting heavy ions in samples at very high energies. Results comparable to years of irradiation are available in hours or days. In past experiments at CAMS, Livermore researchers simulated the aging of weapons-grade plutonium to determine whether helium bubbles that form over time would affect a weapon’s performance. (See S&TR, September 2011, A Beamline to National Security.) This time, the purpose was to create defects in the alloy by implanting iron ions whose energy is similar to that of a fission fragment emitted by a nuclear power plant. Initial characterization displayed a loss of the material’s well-aligned lamellar, or platelike, microstructure. Says Turchi, “This change may indicate that the alloy loses its dimensional stability, which could affect the fuel’s performance.” 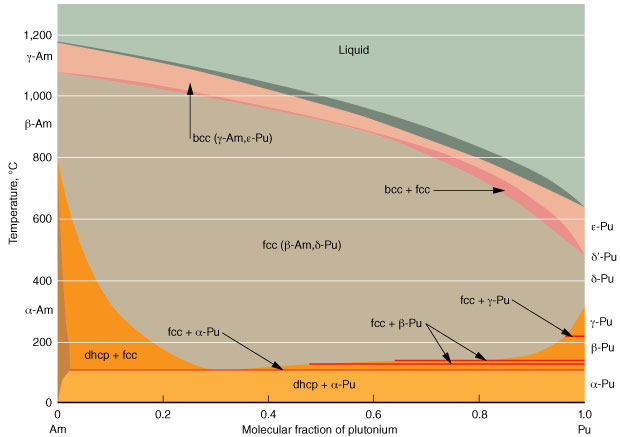 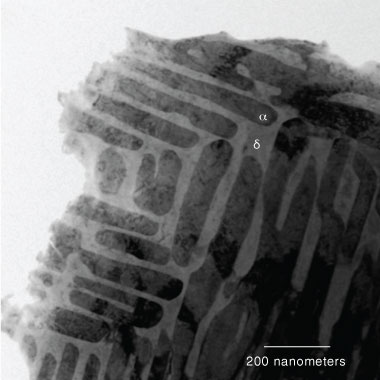 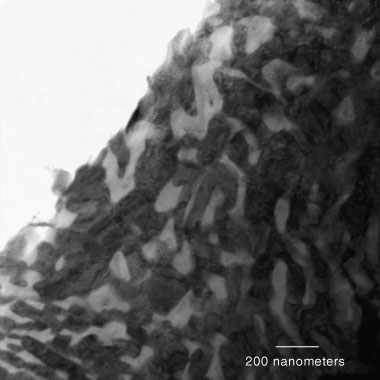 When the uranium–zirconium alloy was irradiated at the Center for Accelerator Mass Spectrometry, it lost its lamellar structure, as shown in this micrograph.

In addition to producing a host of actinide science advances, the UHBU fuel research has led to a number of spin-offs. For example, Livermore metallurgist Adam Schwartz is leading one of the four focus areas for the Department of Energy’s Critical Materials Strategy Initiative, investigating substitutes for rare-earth elements and other critical materials used in clean-energy technologies. The tools developed to study actinides are being applied to examine the rare-earth elements, which occupy the row above the actinides in the periodic table and share many features with that group.

In 2013, Turchi was one of two Americans asked to participate in developing an international database on the thermodynamics of advanced fuels for the Organisation for Economic Cooperation and Development–Nuclear Energy Agency. The goal of the three-year project is to develop a flexible computational tool using CALPHAD to perform thermodynamic calculations on different types of fuels, fission products, and structural materials such as steel and concrete for the next generation of nuclear reactors.

As part of a collaboration between the National Nuclear Security Administration and CEA, the French center for atomic energy, the first CEA fellow to work at the Laboratory arrived in October 2013 for a two-year assignment. Aurélien Perron is modeling the thermodynamics of plutonium alloys that are relevant to stockpile stewardship and advanced nuclear fuels, using this information to carry out kinetic and microstructural studies.

Turchi adds that, although his colleagues never intended to explore conventional nuclear fuels, their findings may prove useful to improving the use of those fuels. The Department of Energy’s Global Threat Reduction Initiative aims to replace highly enriched uranium (HEU) in research reactors around the world with low-enriched uranium (LEU). HEU is much easier to weaponize than LEU and thus is considered a proliferation threat. The team studied a uranium–molybdenum alloy that is a leading LEU candidate, and those results could prove useful to engineers and policy makers who will evaluate the feasibility of converting reactors to an unproven fuel. Transitioning to LEU fuels may expand the number of countries that can host reactors for scientific research and produce isotopes for medical and other peaceful applications.