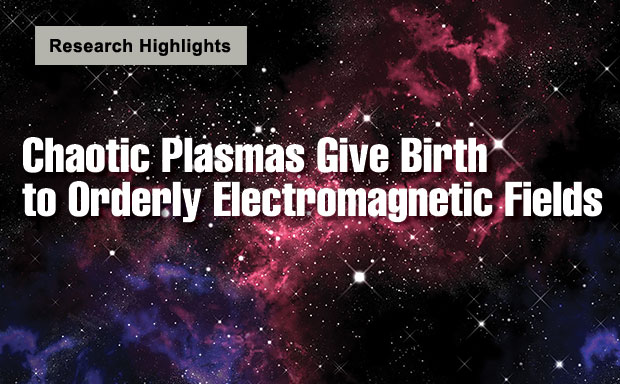 One of the enduring mysteries of astrophysics is how highly organized structures such as vast magnetic fields stretching out for millions of light years can emerge from the frenetic motion of superhot ions and electrons that constitute a plasma. A team of Lawrence Livermore researchers has discovered that streaming plasmas created by powerful lasers appear to give rise to “self-organized” electromagnetic fields similar to those found throughout the universe, such as those that emanate from young stars or supernovae.

Using the OMEGA Extended Performance (EP) laser at the University of Rochester’s Laboratory for Laser Energetics, the team discovered that supersonic counter-streaming (directed at each other) plasmas generate large, stable “structures” of electric or magnetic fields by a mechanism yet to be explained. As revealed in proton radiography images, these structures are oriented perpendicular to the direction of the two plasma flows, have detailed features, and are much larger and persist much longer than would be predicted from the chaotic motions of the plasma ions and electrons.

“What we observed was completely unexpected,” says Hye-Sook Park, physicist and leader of the Livermore team, which includes physicist Dmitri Ryutov and postdoctoral researchers Chris Plechaty, Steven Ross, and Nathan Kugland (formerly of Livermore). “The plasmas we created moved so quickly that we expected them to freely stream past each other without causing the formation of any regular or long-lasting electric or magnetic fields.”

Scientists use the term “self-organization” to describe the process of large-scale structures arising from chaotic, random activity, including the motion of plasma ions and electrons. Self-organization is believed to play an important role in a wide range of astronomical phenomena. For example, it may contribute to the creation of the organized magnetic fields that are critical to star formation and galaxy evolution. Self-organization is visible on Earth in countless ways, from sand dunes and snowflakes to a leopard’s spots. As the Livermore researchers found in their experiments, self-organization also seems to occur when two supersonic plasma streams meet. The brief interactions between charged particles cause energy to be transported from smaller to larger scales. 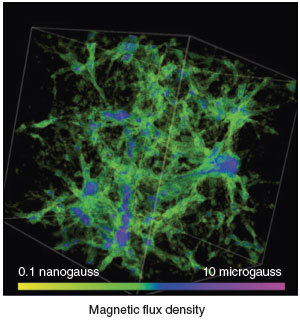 Throughout the universe, self-organization is evident, as in this simulated magnetic field in a cluster of galaxies.

In the Earth’s atmosphere, shocks form when particles collide. In the near-vacuum state of outer space, particle collisions are extremely rare. However, shock waves can occur in outer space when plasma constituents pass by each other at high velocities, largely without colliding. These “collisionless” shocks can give rise to magnetic fields stretching for hundreds of light years. Collisionless shocks appear in a wide array of exotic astronomical settings such as violent solar flares, outbursts from galaxies, and supernova remnants. Closer to Earth, a collisionless shock exists where the solar wind—the stream of charged particles from the Sun—encounters Earth’s magnetic field.

The Livermore team has been conducting experiments since December 2010, first at the University of Osaka’s Institute for Laser Engineering and later at the OMEGA EP laser, an addition to the OMEGA laser facility that provides ultrahigh intensities for x-ray and proton radiography. The experiments focus on investigating whether intersecting plasmas created by lasers can form collisionless shocks and whether these shocks could produce large-scale electromagnetic fields. “When a star explodes, different layers of plasmas move out very fast, and because of their extremely low density, they pass right through each other,” says Kugland. “No shocks should form, but we do see them. Our experiments are intended to answer why they form.”

Kugland notes that laser-generated plasmas initially have much weaker magnetic fields than most astronomical phenomena. In this respect, they are similar to supernova remnants, which exhibit small but well-formed fields that may be either electric or magnetic in nature. “Most astrophysical collisionless shocks can’t be directly measured,” he says. “We look to laboratory experiments to better understand these objects.”

At OMEGA EP, the team uses two 2,200-joule laser beams that generate an intensity of about 3 quadrillion watts (or petawatts) per square centimeter. Each laser pulse, which lasts a mere 3 nanoseconds (or billionths of a second), irradiates a plastic target only 2 millimeters in diameter by 0.5 millimeters thick. The pulses create two plasma flows that shoot toward each other with velocities exceeding 1,000 kilometers per second, the same speed at which many plasmas travel in space. At these velocities, the laser-driven plasma constituents pass through largely without hitting each other, despite their relatively high densities (about 1 quintillion, or 1018, particles per cubic centimeter). 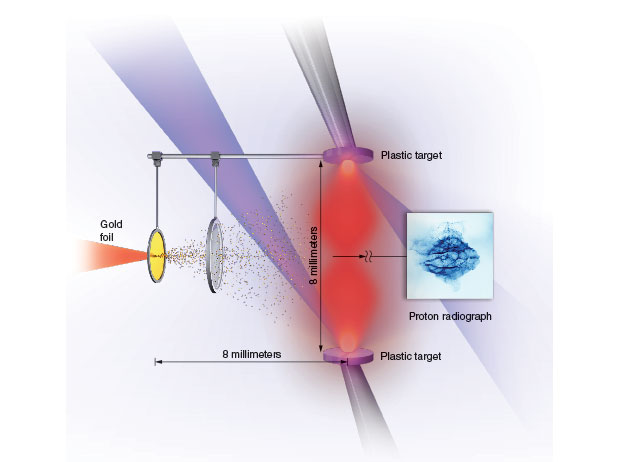 At the University of Rochester’s OMEGA Extended Performance Facility, the Livermore team used two 2,200-joule laser beams for collisionless shock experiments. Each beam (purple) irradiates one of two plastic targets that are 8 millimeters apart. The pulses create two plasma flows (red glows) that shoot toward each other with velocities exceeding 1,000 kilometers per second. The field generated when the plasmas interact was imaged with protons produced by focusing two 250-joule laser beams onto two gold foils (yellow). As the energetic (8.8-megaelectronvolt) protons fly though the zone where the plasma streams intersect, they are deflected by electric or magnetic fields onto a detector, which records radiographs such those shown below. This rendering (by Kwei‑Yu Chu) depicts only one proton stream.

The researchers use proton radiography, the only widely available diagnostic that can capture detailed images of electric and magnetic fields in high-energy-density plasmas. The technique provides images with outstanding spatial resolution (from a few to 10 micrometers in scale) and very good temporal resolution (scaling from 1 to 10 picoseconds, or trillionths of a second).

To generate the proton beams, the scientists focus two 250‑joule, 10-picosecond-long laser beams onto two 2-millimeter-diameter by 50-micrometer-thick gold foils. Either electric or magnetic fields deflect the energetic (8.8-megaelectronvolt) protons created from the gold foils onto a detector as they fly though the zone where the two plasma streams intersect. At first, the proton images (shown below) reveal small-scale (about 10-micrometer-wide) striations oriented in the direction of the plasma flow. A few nanoseconds later, the images begin to show the formation of two joined parallel, “messy” structures perpendicular to the flow, possibly in response to a collisionless shock. The messiness quickly becomes more ordered, and two joined disks, or “pancakes,” appear, each one about 5 millimeters in diameter. They are much larger than the scale at which kinetic plasma instabilities occur and last for about 4 nanoseconds, much longer than the duration of intersecting plasma ions and electrons.

Says Kugland, “We believe we are seeing order rise from disorder, where microscopic processes lead to macroscopic structure. Macroscopic structures emerge from turbulence throughout the universe, and it appears that self-organization can arise from microscopic plasma instabilities on a vastly smaller scale.” The sharp features strongly suggest that organized fields cause the structures to form; small-scale areas of turbulence would only produce small, fleeting areas of blurring on the radiographs.

Ryutov says it is unclear what is producing the images, although they certainly depict either an electric or magnetic field or a combination of the two. “The structures we see on the proton radiographs are robust,” he says. “They are definitely not an artifact of the proton radiographs, but their cause remains a mystery. The structures were a surprise to everyone, and they appear with wonderful regularity.” In several shots, they have the same shape and appear at the same time. To fully understand their origin, however, the researchers need better measurements of velocity, density, and temperature. 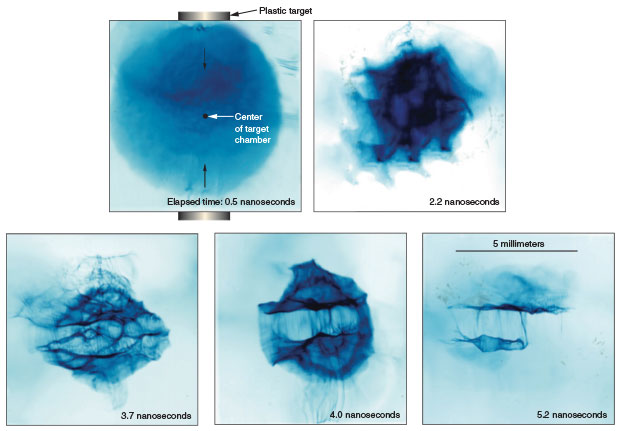 A time sequence of proton radiographs shows the evolution of self-organized electromagnetic fields, as viewed looking down at plasmas flowing toward each other. After a few nanoseconds, the early-time “chaotic” field structures become stable parallel disks, or “pancake” structures. Although this type of self-organization is observed in many astrophysics projects, it is the first one found in a laser experiment.

The team plans to duplicate the OMEGA EP experiments in late 2013 at the National Ignition Facility (NIF) at Livermore to overcome the limitations of the previous plasmas. Earlier experiments at the University of Osaka produced plasmas with relatively low temperature and moderate velocity, resulting in a high number of collisions inside each plasma flow and moderate collisions between the two. The recent OMEGA EP collisionless shock experiment also produced relatively low temperatures and relatively high intrajet (within each stream) collisions, although the plasmas were more energetic.

Park says that NIF is the only facility that can create plasmas with sufficiently high density (greater than 1020 particles per cubic centimeter), high flow velocity (greater than 2,000 kilometers per second), and high temperature (greater than 1 kiloelectronvolt). Under these experimental conditions, intrajet collisions will be truly negligible so that the plasma streams will more closely approximate astrophysical conditions. As a result, the NIF plasmas will be more conducive to self-organization, an environment that was probably barely reached in the OMEGA EP experiments. Ryutov says, “With NIF, we will finally reach scales that determine the underlying physics, allowing us to fully understand the phenomenon.”

“NIF will generate true high-energy-density plasmas,” says Kugland. “We will likely have surprises with the NIF experiments, because we will have different regimes of matter. Another challenge is how to make measurements that are meaningful in this new environment.”

The team’s discovery underscores the usefulness of powerful lasers in studying the physics of plasma interactions, especially the emergence of self-organization and collisionless shocks, under controlled laboratory conditions. “Laboratory experiments using lasers are enhancing scientific understanding of the generation and evolution of electromagnetic fields in space,” says Park. “We believe they will also help scientists address several important questions in astrophysics.”