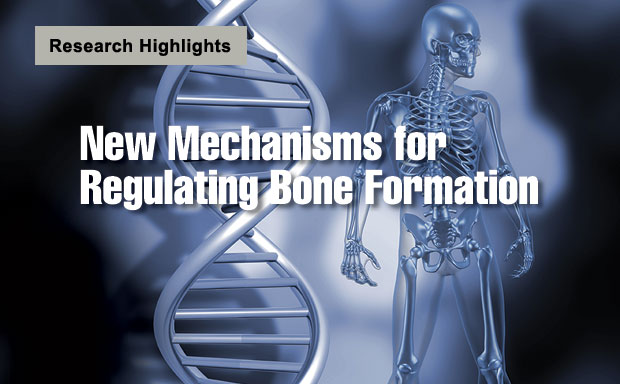 Proteins participate in virtually every process that takes place in a cell, yet the majority of functional elements in the human genome do not code for proteins. Once thought to have no biological function, certain non-protein-coding DNA segments do, in fact, have vital roles in enhancing, suppressing, or modifying the expression of distantly located genes. (See S&TR, June 2005, Mining Genomes; May 2001, The Human in the Mouse Mirror.) “An estimated 95 percent of the human genome is noncoding,” says Gabriela Loots, a biomedical researcher in Livermore’s Physical and Life Sciences Directorate. “Some of these areas act as switches to turn genes on and off. If a switch is broken, it can have just as big an effect as if the protein was mutated.”

Genes must be properly expressed—the right amount in the right place—for biological processes to execute accurately. Even a single nucleotide difference in a regulatory sequence can significantly affect where, when, or how much messenger RNA a gene expresses.

Loots and postdoctoral researcher Nicole Collette led one of the first successful efforts to pinpoint a skeletal disease–associated mutation that alters a long-range regulatory element and replicates a human disease in mice. The study focused on the transcriptional regulation of sclerostin, or Sost, a growth factor that is crucial in regulating bone formation and represents a drug target for the treatment of osteoporosis. Ultimately, researchers want to develop effective nonsurgical treatments for weak or broken bones by manipulating Sost expression. 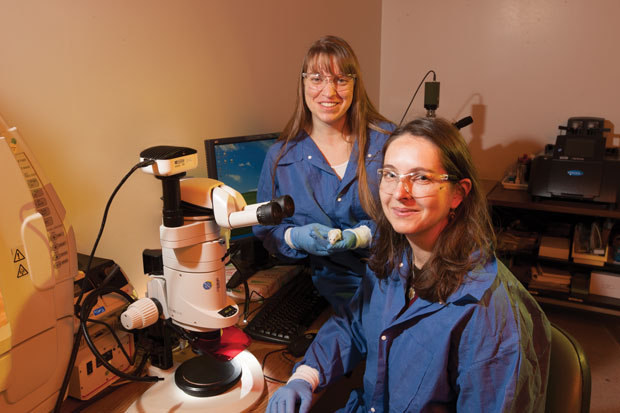 Biomedical researchers Nicole Collette (left) and Gabriela Loots work with genetically engineered mice at Livermore’s animal care facility. Their collaborations with other organizations are helping scientists better understand how gene regulation might be used as a treatment for people suffering from bone-loss disorders.

Bone is a dynamic tissue. It is constantly being refashioned by osteoblasts, cells that make bone, and osteoclasts, cells that break down bone. Osteocytes comprise the bulk of mature bone and are responsible, among other roles, for making Sost. The Sost protein regulates bone turnover through a signaling pathway by which a network of so-called Wnt proteins pass signals from surface-level receptors on a cell to gene expression in the nucleus. This network is involved in many tightly regulated biological processes, including skeletal development and bone metabolism.

Research on human diseases that are triggered by mutations affecting Sost expression have helped scientists understand how Sost and Wnt signaling control bone turnover. For example, sclerosteosis, a disease in which a person’s bones grow to be as much as four times thicker than average, is caused by Sost mutations. These mutations render the Sost protein nonfunctional throughout the organism, which elevates Wnt signaling in osteoblasts and subsequently increases bone formation. Van Buchem’s disease is similar to sclerosteosis, albeit with somewhat less severe symptoms. This rare recessive illness intrigued biologists because of its clear association with Sost expression, despite the lack of mutations in the Sost protein-coding regions.

To more closely examine this mutation, Loots genetically engineered a human transgene to mimic the Van Buchem gene variant. Results from this study, which was funded by the National Institutes of Health (NIH), showed that a 52,000-base-pair segment of a noncoding region located a significant distance from the Sost gene is required to activate human Sost in the skeleton of a mouse. To determine which sequence within the deleted region regulates Sost, Loots compared the human Van Buchem region to the mouse genome and found several highly conserved noncoding sequences. Scientists assume that these segments, called evolutionarily conserved regions (ECRs), have an important biological role; otherwise, the segments would have been discarded as organisms evolved. (See S&TR, April 2005, Finding Genes by Leaps and Bounds.)

In collaboration with researchers at Novartis, Loots introduced these ECRs into osteoblast-like cells and found a 250-base-pair element, ECR5, that behaves as a transcriptional activator and most likely enhances Sost expression. Although ECR5 exhibited enhancer activity, in vitro results did not conclusively show whether the element was essential for Sost expression or whether removing it from the genome would cause Van Buchem’s disease.

Narrowing Down the Possibilities

In multicellular organisms, the transcription of protein-coding genes is regulated by two groups of factors: a promoter and regulatory elements such as enhancers, silencers, or insulators. A type of DNA-binding protein called a transcription factor interacts with regulatory elements to activate gene expression. In previous work that examined patterns of transcription factor binding sites, the Livermore–Novartis collaborators predicted that a family of muscle-specific transcriptional regulatory proteins known as Mef2 (a family of four different genes, labeled Mef2A–D) might be binding to ECR5 and controlling its function. Because Sost and Mef2C were co-expressed in bone cells, the researchers examined whether Mef2C protein can further increase ECR5 activity. They found that Mef2C served as an activator, binding to ECR5 and modulating its activity.

In vitro studies in controlled environments are useful for learning how a protein carries out its function. However, complementary in vivo experiments were needed to confirm the regulatory functions of ECR5 and Mef2C in Sost expression. With new funding from NIH, Loots and Collette teamed up with Aris Economides, a scientist at Regeneron, and Richard Harland of the University of California at Berkeley to study the interrelated roles of Sost, ECR5, and Mef2C in bone.

This study used a combination of ECR5 transgenic mice and so-called knockout mice—those with a gene sequence deactivated. The different strains carried a deletion of either the Sost gene, ECR5, or Mef2C. The mice then mated with each other, generating several knockout–knockout and knockout–transgenic strains. When Collette compared Sost expression and bone phenotypes of the different combinations, she found that mice lacking Sost, its enhancer, or its activator had denser bones than the control mice.

Microscale computed tomography analysis performed by investigators at the University of California at Davis and Regeneron revealed that ECR5 knockout mice had less bone overgrowth than those without Sost, consistent with Van Buchem and sclerosteosis bone parameters. This finding confirmed the researchers’ hypothesis that the ECR5 deletion reduces the expression of Sost and is sufficient to cause the high-bone-mass phenotype observed in those with Van Buchem’s disease.

For the bone parameters measured by the team, osteoblasts without Mef2C were similar to ECR5 knockout mice and humans with Van Buchem’s disease—results that confirmed Mef2C’s critical role in ECR5 enhancement and subsequently in Sost expression. In addition, ECR5, Sost, and Mef2C knockout mice all showed significantly elevated levels of Wnt signaling, additional evidence that the three mouse strains were generating high bone mass through the shared mechanism of reduced Sost expression in bone.

Collette notes that just because a segment has a function does not mean the function is essential. “The genome has a lot of redundancy,” she says. “With Mef2C, we wanted to determine whether removing this transcription-activating protein would have a consequence. We got lucky, and it produced the same results as two high-bone-mass diseases.” According to Loots, this study is the first in vivo demonstration of Mef2C’s involvement in Sost regulation. Previous research had focused on characterizing its role in muscle and cartilage development. 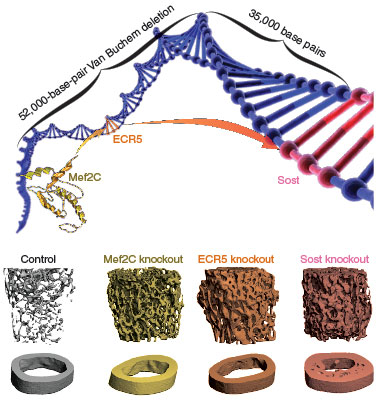 The team’s Sost findings deepen scientific understanding of long-range gene regulation and the life-long cycle of bone remodeling in humans. In addition, this work may help researchers exploit the gene and signaling pathway to treat individuals suffering from bone-loss disorders such as osteoporosis.

By 2020, half of all Americans over age 50 are expected to have low bone density or osteoporosis. Current treatments for osteoporosis simply curtail bone loss. A targeted therapy that suppresses Sost expression could boost bone formation and build stronger bones. With funding from the Laboratory Directed Research and Development (LDRD) Program, Loots is investigating how the interplay between metabolic response and genetic variation might affect targeted treatments to improve bone density.

Collette has also initiated an LDRD project, which will investigate effective Sost-related treatments for traumatic bone injury in patients such as soldiers with severe breaks that might not otherwise heal well. She notes that a quarter of all injuries sustained by U.S. troops are breaks and other bone injuries that require hospitalization, and more than 10 percent of these fracture cases result in permanent disability. Delivering Sost-suppressing antibodies to osteoblasts at the injury site could increase bone formation and reduce recovery time.

Loots and Collette are excited to see their Sost research progressing toward practical solutions for improving human health. Collette observes, “If we understand how something is built, we can figure out how to fix it.”