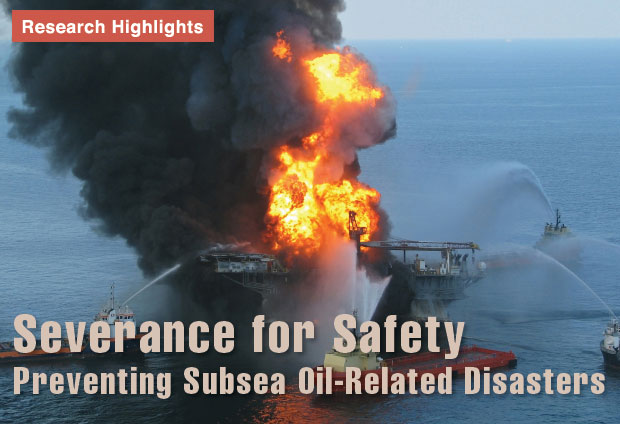 The 2010 Deepwater Horizon oil spill was the largest marine oil spill in U.S. history, releasing millions of barrels of oil into the Gulf of Mexico. The incident, which claimed the lives of 11 crew members, caused catastrophic damage to the Gulf of Mexico and surrounding environments. The oil platform’s blowout preventer was supposed to sever the drill pipe and stop the flow of oil and gas, but it malfunctioned, allowing oil and gas to flow unimpeded into the Gulf. After the Deepwater Horizon event, Livermore researchers evaluated possible solutions to the problem (see S&TR, March 2011, Lending a Hand to an Oily Problem) and considered options for how to prevent such an event in the future.

Shell International Exploration and Production Inc. (SIEP) decided on an explosives-based emergency severance tool that could be activated upon failure of the blowout preventer. SIEP approached the Laboratory to suggest a specific technological solution. Funded by Argonne National Laboratory on behalf of SIEP, a team of Livermore researchers applied advanced simulation capabilities and expertise in high explosives stemming from stockpile stewardship to develop an initial design for a robust emergency severance tool. “The emergency severance tool serves as a fail-safe device,” explains principal investigator Dennis Baum. “It’s comparable to having a fire extinguisher in a home. The home is not expected to burn, but the fire extinguisher is there to fight any fire that may occur.”

The novel technology that Baum’s team created uses an array of six shaped charges that simultaneously detonate on command to sever the connection between the blowout preventer and the surface drilling rig, called the marine riser system. Placed just above the blowout preventer, the emergency severance tool allows the rig to motor away from the well, potentially saving lives and preventing rig damage. Making oil-drilling technology more safe and reliable contributes to Lawrence Livermore’s energy security mission.

The blowout preventer is equipped with multiple blind shear rams—hydraulic devices with twin cutting blades that sever the drill pipe and block the flow of oil and gas escaping from the well. In the Deepwater Horizon incident, the steel drill pipe buckled under pressure, stopping the blowout preventer from fully severing the pipe and sealing the well. Learning from this event, SIEP sought a backup technology that would mitigate the risk of future catastrophic spills.

The backup emergency severance tool had to be extremely reliable, able to withstand remote deep-water conditions, maintain functionality for 12 months (the duration of a drilling operation), and meet strict size, geometry, and weight limitations. Livermore’s design was chosen over those proffered by other institutions. “Similar to a nuclear weapon, this system needs to be very reliable,” says Baum. “Its use of explosives puts it in Livermore’s wheelhouse, where we can tap our vast experience with stockpile stewardship–focused projects.”

Building on a long history of developing special-purpose explosive charges, the emergency severance tool design uses linear-shaped charges—blocks of high explosives in a simple, long, rectangular shape—which are commonly used for construction and demolition projects. Each 15-centimeter-long shaped charge has a copper-lined cavity running down one edge. The explosive is backed by a unique lighting (initiation) system and detonator, a device that converts an electrical pulse into a small detonation that initiates the high explosive. When propagating through the explosive, the detonation wave rapidly squeezes and collapses the copper liner, causing a copper sheet (or jet) to shoot out at very high speed, slicing through the drill pipe. Other charge shapes, such as cones or spheres, are routinely used to penetrate heavy material, but a linear sheet, which acts like a blade, proved most suitable to cutting the steel drill pipes. “Linear-shaped charge arrays are simple, effective, and efficient,” says Baum. “The design developed by our team must operate in a complex, multifaceted environment to accomplish something never done before.”

The Livermore team had to address conflicting design requirements to ensure severance. The charges, each containing a little more than 2 kilograms of explosives, are uniformly spaced and face radially inward within the steel mandrel, whose bore matches the marine riser system. This mandrel mimics the inner chamber (pressurized at 1 atmosphere) that will house the charges subsea. All charges must detonate simultaneously to generate maximum effectiveness and achieve full severance. The copper jets must penetrate four regions defined by the 7.6-centimeter-thick steel mandrel, the fluid within the marine riser, the steel pipe—commonly referred to as the drill collar—and any fluid inside the drill collar. The power of each jet must be sufficient to account for variation that can degrade the force of the jets as they penetrate toward and through the target.

Penetration varies with distance from the target. Inside the riser, the position of the drill collar fluctuates during the drilling operation. The steel pipe is not always centered, and its exact location upon system initiation may be unknown. In a worst-case scenario, the drill collar could be fully eccentric, located farther from some charges than others. Lack of centralization is purported to have contributed to the Deepwater Horizon event. In the proposed emergency severence tool, the drill collar is not subjected to equal destructive force from each charge. The emergency severence tool housing must remain intact while isolating the surrounding environment and equipment from shock waves, debris, and byproducts of the explosion. After severance, the oil rig, equipped with thrusters similar to a ship, can disconnect and maneuver away from the well. Livermore design physicist Kirsten Howley says, “I am encouraged that SIEP has been exploring these technologies to protect the safety of their crew.” 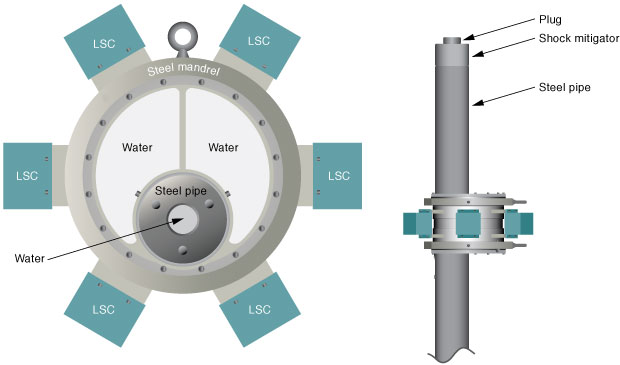 The emergency severance tool that Livermore designed for Shell International Exploration and Production Inc. features an array of six linear-shaped charges (LSCs), which will sever the thick steel pipe in the event of a malfunctioning blowout preventer.

In Agreement: Testing and Simulations

Livermore’s emergency severance tool design was validated through a series of five experiments and numerous simulations. The first two experiments, conducted at the Laboratory’s High Explosives Applications Facility, validated the performance of the lighting system to ensure synchronization of the six separate explosions. The next two experiments, performed at Site 300, tested the behavior of the shaped charges in air—to establish a baseline for charge and jet behavior—and in drilling mud, to allow for subsea conditions. To study the basic behavior of jet formation and performance, the first of these tests was conducted with the jet propagating through air before impacting the target. The bladelike jet of copper created an elongated crater in the target, with complete penetration occurring near the center of the jet. The second test examined jet erosion by detonating the charges in a tank filled with drilling mud. Radiographic data were collected during these experiments so that the results could be compared with simulations of jet speed and configuration. Livermore researchers found that both tests accurately reproduced details of the jet’s structure and performance as predicted by the simulations.

The final Site 300 experiment examined the behavior of the complete array and demonstrated the array design’s potential. Using 72 time-of-arrival flashers (12 in each charge), six time-of-arrival films, and seven underwater optical fibers to measure the jet time of arrival, among other diagnostics, the team recorded and closely analyzed array behavior. As predicted by pre-shot simulations, the experiment achieved 90 percent severance.

The ability to accurately simulate near severance is no easy feat. Through these models, the team has increased confidence in its simulation capabilities to further improve the technology. “I am confident our team is only a design tweak away from making our emergency severance tool fully functional,” declares Baum. “If we replace some of the components with better engineered materials and tailor some design details as indicated by our simulations, I expect we will achieve success.” 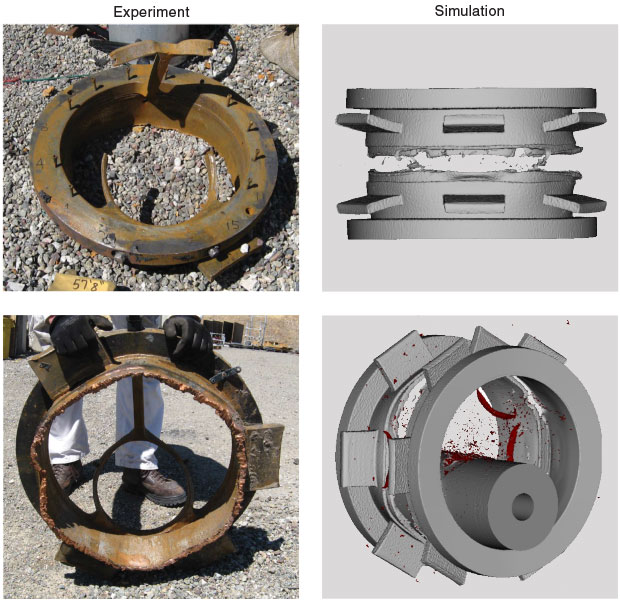 The results of (left) experiments conducted at Site 300 with the full array of explosives agreed well with (right) simulations of the array’s severance function. The LSCs detonated and severed the steel mandrel as expected. These results gave the researchers confidence that their array design will function as intended in the field.

Livermore hydrodynamic simulations also agreed with the experimental results. Going forward, the Livermore team and SIEP can use these models to modify their experimental design, knowing that they would get similar outcomes experimentally. Relying on simulations to guide future enhancements cuts time and cost. “Simulations are most valuable for their predictive capability,” explains Howley. “As a national laboratory, we focus on stockpile stewardship computational tools supported by validating experiments. Therefore, we rely heavily on our computing capabilities to show that we can model energetic and complex events.”

In the future, the researchers will use the simulations to identify design changes that could optimize the current emergency severance tool design to achieve a robust 100 percent severance. They also plan to model and test alternate scenarios, such as different drill pipe sizes and locations within the marine riser system, to understand performance sensitivity to real-world variations in drilling operations. In addition, the team will examine different amounts and distributions of high explosives.

As with so many Livermore projects, this effort marries simulation and experiment to determine design parameters more quickly, efficiently, and inexpensively. Using these capabilities, Baum and his team created a novel device with the potential to transform the safety of oil drilling operations in the interest of saving lives, protecting the environment, and improving energy security.