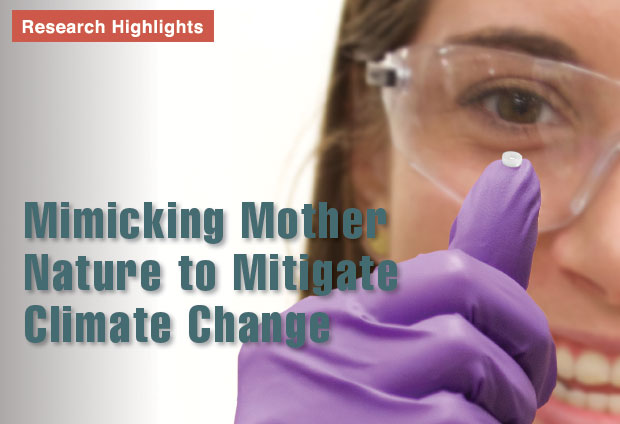 Scientist Jennifer Knipe holds an additively manufactured donut-shaped hydrogel that is being developed to trap methane for conversion to methanol. (Photo by Maren Hunsberger.)

Although carbon dioxide shoulders the majority of climate change blame, methane is the second most prevalent greenhouse gas. In addition, methane is 25 times more effective at trapping heat than carbon dioxide. This heat contributes significantly to Earth’s changing climate, which can influence shifts in economic and agricultural trends and promote erratic weather patterns. (See S&TR, June 2012, Seeking Clues to Climate Change.) To help reduce methane emissions, Livermore scientists Sarah Baker, Joshuah Stolaroff, and their research team are developing an efficient way to convert methane to methanol—a liquid that has a wide range of applications.

Methane is emitted by wetlands, thawing permafrost, and grass-eating animals, and is broken down by soil microorganisms and atmospheric chemical reactions. Today, over 60 percent of the methane in the atmosphere results from human activity, throwing methane’s natural cycle out of equilibrium. The decomposition of human-generated trash, for instance, is often overlooked as a source of greenhouse gases, yet this process releases massive quantities of methane through the degradation of volatile organic compounds and microbial action. Localized and stationary sources of methane such as landfills, natural gas extraction sites, and areas of rapidly thawing permafrost are the emission sources Baker’s team is targeting with its innovative methane-conversion materials. 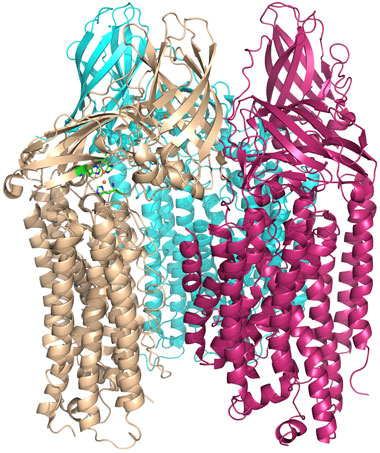 Particulate methane monooxygenase (pMMO) is an enzyme that methane-consuming bacteria called methanotrophs use to metabolize methane into methanol. Livermore researchers are focusing on pMMO as part of a scheme to trap methane as it is emitted from landfills and convert it to methanol. (Rendering by Edmond Lau.)

Traditionally, most landfill methane is emitted into the atmosphere or is “flared off”—burned for energy­ in a process that releases carbon dioxide. “Obviously, this is not an effective solution to the climate change problem,” comments Baker. More recently, several government agencies have recognized landfill emissions as greenhouse-gas sources that can be easily identified and reduced. In response to increased political pressure, some large landfill sites are building methane-recapture plants. These operations capture emissions and convert them into energy that is used onsite or sold to outside companies. However, the cost and complexity of these systems have limited their adoption for a majority of landfills and natural gas extraction sites.

When considering options for creating a less expensive, more feasible methane mitigation approach, Baker turned to nature for inspiration. “Converting methane to methanol, which is the liquid form of gaseous methane, requires less energy than purifying and condensing methane gas,” she explains. “The liquid is also easier and more efficient to transport, and methanol can be used in manufacturing and as fuel.” However, no commercially viable small-scale chemical methods exist to convert methane to liquid fuel. The most mature technique, called the Fischer–Tropsch process, requires many complicated steps, making it inefficient and costly. Other methods use traditional stirred-tank bioreactors, which are slow and energy intensive—the process occurs in batches, after which all equipment must be cleaned and all organic substances separated out for reuse.

To make a smaller scale process more commercially viable, the research team looked to bacteria. “We see methanotrophs—bacteria that consume methane as their energy source and turn it into methanol—performing exactly what we want to do,” notes Baker. “They know how to perform this conversion, so let’s learn from them.”

Methanotroph contain an enzyme called particulate methane monooxygenase (pMMO), which the organism uses to convert methane to methanol. This enzyme is embedded in folded lipid membranes that increase the surface area exposed to methane gas. Because pMMO is stored in a cell membrane, it is easy to extract and use. A partner research team at Northwestern University provided the pMMO for the Laboratory’s experiments.

“Once we decided on this method of conversion,” explains Baker, “the next step was to identify a more efficient way of introducing methane to the enzyme.” Instead of forcing the gas into an enzyme-containing liquid, similar to the process used in conventional stirred-tank bioreactors, the team embedded pMMO in a hydrogel—a highly absorbent polymer made mostly of water—allowing them to increase the contact area between the enzyme and methane. Embedding pMMO in a printable hydrogel allows the team to mimic the bacteria’s structure and also presents the possibility of using additive manufacturing to create the materials.

Jennifer Knipe, a postdoctoral researcher at Livermore and an expert in hydrogel formulation, was charged with finding the optimum hydrogel structure for methane–enzyme interaction. “The consistency of the hydrogel polymer we’re using, called polyethylene glycol, is very similar to a brittle contact lens,” says Knipe. “We’ve been studying the literature on fluid–gas exchange in contact lenses to better design our polymer. The problem is that the hydrogel on its own behaves a bit like jello in that it can’t be disturbed too much or it will fracture—so we tested plastic matrices that would act as scaffolding to give it more strength and structure.”

The team tested several structural designs for the matrix and found that a silicone mesh structure was effective but only when very thin. The methane–enzyme interaction is limited by diffusion and takes place within a few micrometers of the mesh’s outside edge. The team also tested a hydrogel polymer without a matrix. Through their experiments, the team found that by making the polymer donut shaped, they could maximize its surface area and therefore increase methane conversion. “We’re working on incorporating a silicone component into the donut-shaped polymer to keep it structurally sound,” says Knipe. “The exciting part is that we’re applying additive manufacturing to print the silicone matrices and the hydrogel quickly and simply, which could make this approach viable on a large scale.” 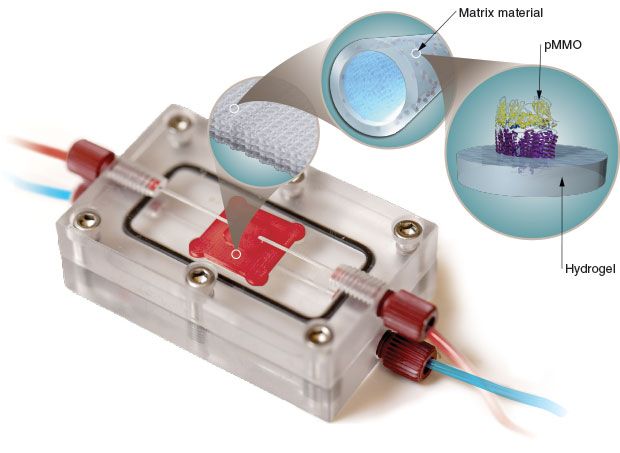 In the conversion process, the enzyme pMMO is embedded in a hydrogel—a highly absorbent polymer—which is then formed into a matrix with a microstructure designed to maximize the enzyme’s effectiveness in converting methane and oxygen to methanol, which can be readily upgraded to fuels or other chemicals. 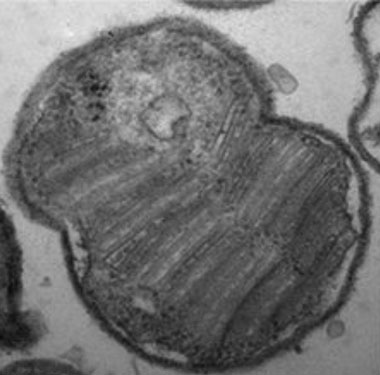 The methanotropic bacterium Methylococcus capsulatus (Bath strain) provides Baker and her team with a source of pMMO to use in their methane capture and conversion approach.

The Future of Methane Conversion

Baker’s team has already presented its findings on methane-to-methanol conversion at scientific conferences, and they plan to test other hydrogel polymers to determine whether any are less expensive and at least as effective as polyethylene glycol. Baker adds, “We also need to find an alternative to our cofactor,” referring to an “assistant” molecule required for the enzyme to function properly in a laboratory setting. When the pMMO is removed from inside the bacteria, the molecules that naturally assist its function no longer surround it. The team used a reduced form of nicotinamide adenine dinucleotide (known as NADH) for their experiments, which is an expensive substance. Knipe notes, “Another limiting element is the enzyme itself. It breaks down after a certain period of time, and then we have to add a fresh batch. We’re looking into why this breakdown occurs so we can preserve the enzyme’s lifespan.”

Although the process still needs to be refined and scaled up, the researchers are optimistic about its possible applications. “An efficient process could give industry more tools and incentives to reduce methane emissions,” states Baker. The team will continue to draw inspiration from nature in its pursuit of mitigating one of the world’s most potent greenhouse gases. 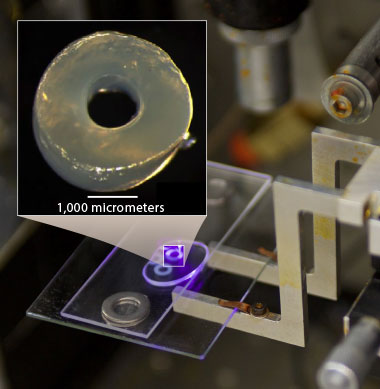 A donut-shaped hydrogel is the most effective structure for trapping methane. Additive manufacturing can be used to fabricate the shaped hydrogel. The structure is then cured using ultraviolet light. (Photo by Maren Hunsberger.)