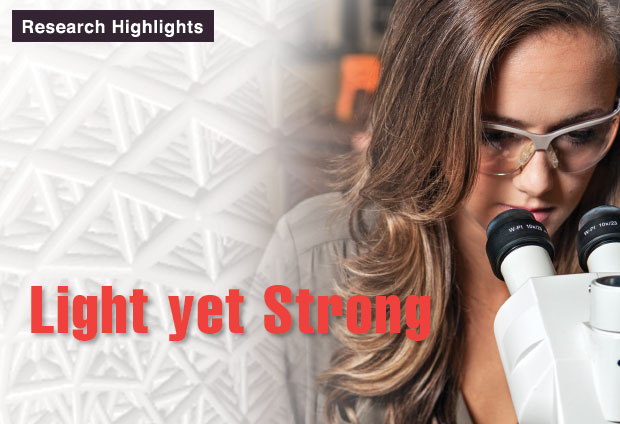 Mechanical engineer Julie Jackson examines an engineered test structure that is smaller than a match head but contains hundreds of tiny, repeating octet truss elements. Using these trusses as building blocks, Livermore and Massachusetts Institute of Technology researchers have created low-density materials that are remarkably strong and stiff. (Photograph by George A. Kitrinos.)

Mechanical properties such as strength and stiffness depend on the base material of which a structure is made, how the material itself is structurally organized, and how dense it is—that is, the ratio of solid to empty space. As density decreases, so does strength, sometimes dramatically so. For most solids, halving the density will reduce strength to one-quarter (quadratic scaling) or one-eighth (cubic scaling) of its previous value. However, by engineering how a material is structurally organized, researchers can improve the scaling of strength to density. To give a macroscale example, a bridge built with lattice or truss supports will be both stronger and stiffer for a given weight than a basic beam bridge because the trusses increase the structure’s rigidity and distribute the bridge’s load over a much larger area, enabling the bridge to stretch or compress rather than bend and potentially buckle under loading. Similarly, I-beams, staples of modern construction, achieve a strength-to-weight ratio superior to that of solid beams by apportioning mass to the very top and bottom of a beam, where strains and stresses are greatest.

Livermore researchers are innovating techniques to create lightweight yet strong materials with features engineered at the micro- or even nanoscale. These scientists and engineers have taken a cue from architects and structural engineers, despite working at vastly different scales. “The inspiration for our work is architectural constructions made of metal trusslike structures that are designed to be lightweight and yet sustain a lot of weight,” notes engineer Xiaoyu “Rayne” Zheng. “It’s civil engineering at the micro- and nanoscale.” Zheng is developing engineered, additively manufactured structures with hierarchical, architectural microscale features, while materials scientist Monika Biener is creating randomly structured, self-assembled materials with nanoscale features. Both approaches offer avenues to explore the relationship between mechanical properties, structure, and density at several scales and to even create materials with previously unattainable combinations of properties. 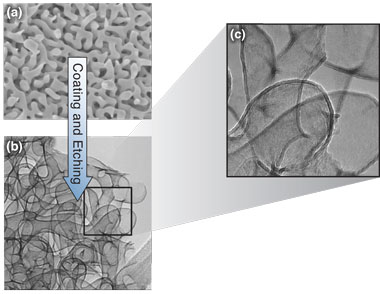 These electron microscopy images show how a stiff, lightweight titanium oxide foam is created. (a) A spongelike nanoporous gold structure is the starting point. (b) The structure is coated with titanium oxide, and the gold is etched away to reveal a transparent, highly uniform material with excellent mechanical properties. (c) The foam’s hollow tubes are only 2 nanometers thick.

A Template for Success

Using the design element of interconnected, hollow, nanometer-scale tubes, Biener and her colleagues have produced porous structures with the lightness and high surface area of aerogels, a type of extremely low-density foam, but 10 times stronger and stiffer. In fact, these materials achieve quadratic scaling of stiffness with density, thought to be the best achievable for structures, such as foams, that bend under stress. “Ligament connectivity gives the foam a favorable strength-to-density ratio,” explains Biener.

Synthesis of these materials begins with a gold–silver alloy structure. The scientists apply an acid to remove the silver, leaving behind a fine network of gold ligaments. Notes Biener, “Nanoporous gold is built by a self-organization process, which gives it a very unique spongelike structure and special features, such as a narrow pore size distribution. It also coarsens when exposed to heat, which gives us a way to tune the material.” Depending on the temperature to which the gold is heated, the team can adjust the pore size between 30 nanometers and 4 micrometers while preserving its characteristic shape.

Even the gold itself serves as a template for other materials. These have so far included aluminum, titanium, and zinc oxide, but the flexible synthesis process will eventually be extended to other metal oxides and maybe even other kinds of templates. To coat the gold’s surface with thin, uniform layers, the researchers use atomic layer deposition (ALD), a gas-based technique that enables atomic-level control of film thickness. Once coated, the material is shielded from further heat-induced pore size growth. ALD also enables some customization of density: The more layers applied, the denser the final material will be.

The gold is etched away, leaving a metal-oxide foam that has inherited the gold’s structure. The strong and stiff foam features two separate but interwoven networks of tubular pores—one where the gold originally existed and the other formed by the silver’s removal. Biener’s team can create foams up to several millimeters in diameter and with tube walls as thin as two nanometers.

Laboratory researchers have begun to explore potential applications for these nanotubular metal-oxide foams. For example, their combination of ultralow density and high stiffness makes them ideal candidates for x-ray backlighters, which produce x rays to investigate the physical phenomena that occur in the extreme environment of a target bombarded with laser energy. During tests at the Omega Laser Facility in Rochester, New York, nanotubular titanium-oxide foams have yielded up to 17 times more x rays than standard titanium-doped silica aerogels. Biener and her colleagues are also investigating how the foams’ high surface area and customizable structure, composition, and density could benefit other applications that currently use aerogels, such as filtration, catalysis, and energy storage. 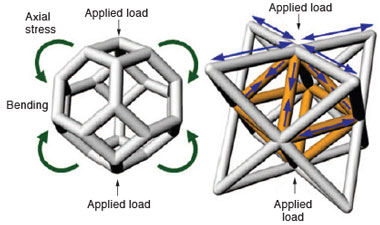 A joint team of researchers assembled from Livermore and the Massachusetts Institute of Technology (MIT) and led by Zheng, Livermore additive manufacturing expert Chris Spadaccini, and MIT’s Nicholas Fang has developed a micro-architectured material with the same weight and density as aerogels but 10,000 times the stiffness. “These lightweight materials can withstand a load of at least 160,000 times their own weight,” says Zheng. “The key to this ultrahigh stiffness is that all the microstructural elements in this material are designed not to bend under applied load.” The team has demonstrated both linear and quadratic scaling of strength to density, depending on the lattice geometry they select. Linear scaling—a slower loss of stiffness as mass is reduced than with quadratic or cubic scaling—is not achievable with randomly organized structures such as aerogels.

Octet trusses serve as the basic building block for the stiffest and strongest structures. “We used the octet truss for our designs because it has an optimized geometry that is stretch dominated and relatively isotropic, which means that forces applied in different directions produce a similar response,” Zheng explains. A honeycomb structure, by contrast, is much stronger and stiffer in some loading directions than in others.

The lattice structures are created with projection microstereolithography, an additive manufacturing technique that uses ultraviolet light to imprint, layer by layer, a photosensitive polymer resin with a complex three-dimensional (3D) image. (See S&TR, March 2012, Materials by Design.) A 3D model of the object is broken up into two-dimensional slices, which are projected onto a digital photomask. An ultraviolet light–emitting diode illuminates the miniature display, which reflects the image slice through a series of optics and onto the liquid resin, which hardens in the image’s shape. Next, the sample is coated with more resin, and the next slice of the model is projected and imprinted on the material. Once the full pattern has been applied, excess resin is removed, leaving behind the completed object.

The efficient process can create objects up to a few centimeters in diameter and with features between 10 to 500 micrometers in only a few hours or less, depending on the size of the object and the complexity of the features. Notes Fang, “Now we can print a stiff and resilient material using a desktop machine. This allows us to rapidly make many sample pieces and see how they behave mechanically.”

Microstereolithography is only compatible with a few materials, so the team has developed several postprocessing techniques for creating metal and ceramic lattices. Solid ceramic lattices can be made by mixing nanoparticles into the resin and then using a heat treatment to remove the polymer from the finished structure. Ultralight ceramic or metallic lattices with hollow struts are produced by coating a polymer lattice using electroless plating or ALD and then melting or etching away the polymer core. Regardless of the material, the resulting structures exhibit ultrastiff properties across a broad range of densities. “Our micro-architected materials have properties that are governed by their geometric layout at the microscale, as opposed to their chemical composition,” says Spadaccini.

The researchers’ next goal is to discover the smallest possible feature size achievable with the largest possible span, using a new Livermore-developed lens for the microstereolithography system. The lens will enable fabrication of parts up to 15 centimeters in diameter, an unprecedented size for this technique. “We are also embedding multiple levels of hierarchies into a material,” notes Zheng. “Instead of making the material out of a single hierarchy and length scale, we are developing processes to make polymer, metallic, ceramic, and composite materials with multiscale features architected at successive length scales, from centimeters down to tens of nanometers.” For example, the team produced a hierarchical lattice material made of nickel and having more than four levels of hierarchy, with features as small as tens of nanometers. These fractal designs are allowing the researchers to build lighter, stronger, and larger objects than ever before, with exponentially larger surface areas. Ultimately, the team hopes to see their lattices adopted by transportation, electronics, aerospace, and other industries interested in ultralight products with maximum fuel efficiency and functionality, without sacrificing strength. 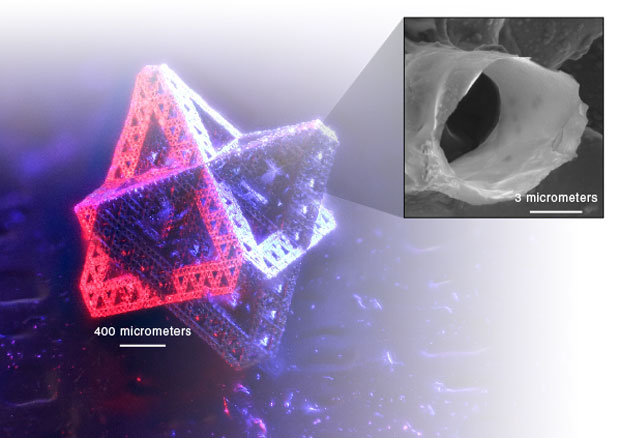 Employing their own design tools and an additive manufacturing technology called projection microstereolithography, along with postprocessing techniques, Livermore engineers have created objects made of hierarchical, architected materials. This object is an octet fractal unit cell made of nickel and having hierarchical features across more than four orders of magnitude in length scale. (Images courtesy of John Vericella and Xiaoyu “Rayne” Zheng.)

While superior strength and stiffness are often desirable properties, sometimes other property pairings are called for, such as strength and compliance, that is, deforming slightly in response to, say, a workpiece being held in place. Mechanical engineer Howard Rathbun and his colleagues in the Defense Technologies Engineering Division were using another AM technique, selective laser melting (SLM), to build a series of heavy, high-density steel parts when they realized that their supporting jig was too stiff. The rapid cooling undergone by SLM parts during fabrication produces residual stresses, which were causing parts to distort and sometimes even break. Using SLM, they built a jig composed of macroscale bend-dominated lattice structures that was strong enough to support a part but had fewer and more compliant connections to accommodate distortions and prevent part damage. “In this situation, we were able to gain control by ‘letting go,’” explains Rathbun.

The key, as Laboratory researchers have found, is designing the right material for the right application. “We’re not limited to one design,” adds Zheng. “We can create different architectures with diverse property combinations. We offer properties tunable by design, including energy absorption, ductility, conductivity, and strength.” Work by Zheng, Biener, Rathbun, and others is introducing greater flexibility into the material design and synthesis processes by aiding researchers in understanding how to decouple properties that usually go together, such as strength and density, and bring together properties that are usually exclusive, such as temperature resistance and ductility. These efforts, supported by Livermore’s robust design, manufacturing, and mechanical testing capabilities, will help scientists and engineers to tailor materials more precisely to a wide range of scientific and technological applications.