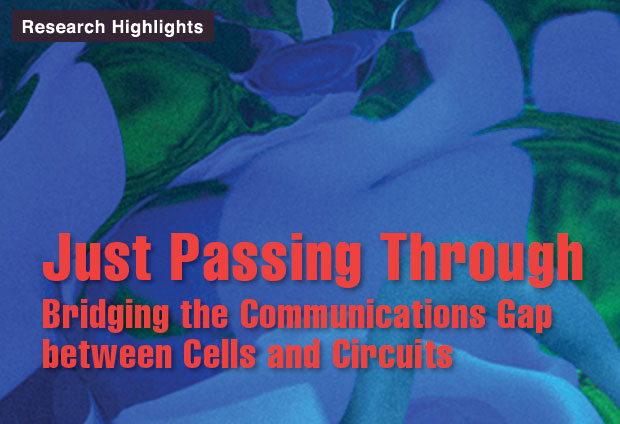 Nature and scientists have both come up with clever and efficient ways to move information around in their respective systems. Whereas living cells use ion fluxes moving across cell membranes to transmit instructions and other information, electronic devices, such as computers, use electrons moving through wires. Both signal-passing methods depend on charged particles: Ions are either positively or negatively charged, while electrons carry a negative charge. Livermore scientist Alex Noy leads a team of researchers exploring innovative ways to connect the two “charged” worlds of living biology and electronic circuits by developing synthetic analogs of the ion channels found in biological membranes. Such a communications bridge could open new possibilities in synthetic cells, targeted drug delivery, and biosensing. Beyond that, this research could also lead to devices that are reflexive—responding as do nerves, muscles, and brains—using circuits that speak the signaling language of our cells. 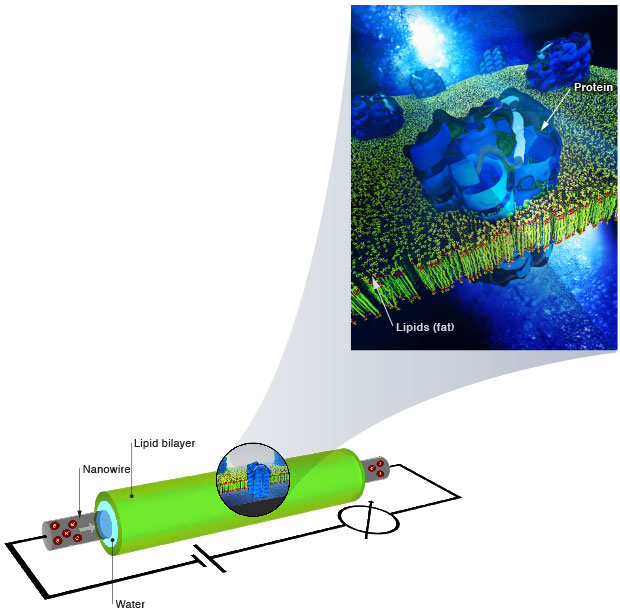 To join the worlds of biology and electronics, a team at Lawrence Livermore developed a sensing device (bottom) that mimics (top) a cell and its membrane—in which proteins act as a conduit through the membrane’s lipids—“translating” the ion fluxes of the biological world into the language of electrons spoken by electronic devices. In the device, a silicon nanowire (gray) surrounded by a film of water (blue) is coated with a lipid bilayer (green). Ions entering through an ion channel change the pH of the water, inducing a change in the wire’s current. This current change is a signal that can be detected and translated into useful information. (Bottom rendering by Ryan Chen.)

Biological cells communicate in many ways, but in most cases it comes down to controlling the flow of ions such as calcium and potassium from outside to inside the cell or vice versa. Because the environment inside a cell must be well controlled even when conditions outside the cell are fluctuating, a cell has a gatekeeper, the cell membrane. Embedded in the cell membrane is a system of pores, pumps, and shuttles that actively or passively transports specific ions and molecules through this natural barrier. (See the box below.)

Noy and his team, including Livermore’s Ramya Tunuguntla, Jia Geng, Huanan Zhang, and Kyunghoon Kim, are focusing on the electrical aspect of transmembrane communications. “What we want to do is tie the worlds of electronics and biology together,” explains Noy. By no means a trivial matter, bridging this gap required an innovation to “translate” the language of ions into that of electrons. The technique that Noy and his team chose for this daunting challenge is a system based on a lipid-coated nanowire. A silicon wire measuring only 80 nanometers in diameter is surrounded by a thin film of water or other fluid, over which a lipid bilayer is deposited, creating a tubular shielding made out of the same material as a cell membrane. “Lipid bilayers are virtually impermeable to ions and large molecules and have limited permeability for water and small, uncharged molecules. Thus, they form a highly efficient nanoscale barrier system,” Noy explains. The lipid-coated device is then placed in solution, and the current flowing through the wire is measured with electrodes attached to both ends. (See S&TR, April/May 2010, Unique Marriage of Biology and Semiconductors.)

This lipid-coated nanowire provides a versatile platform to which Noy and his team attach smaller structures. Just as one pokes a plastic straw into a juice box, Noy’s team can insert hollow structures—designed to transport specific types of ions—from the exterior, through the lipid membrane, and into the fluid-coated nanowire “cell.” The structures allow ions to pass from the interior into the surrounding solution, changing the interior fluid’s pH. This pH change then alters the conductance of the nanowire’s surface, varying the current flowing through the wire—a change detected by the electrodes. In short, the lipid-coated nanowire functions as a sensing device that the team can use to translate ionic signals into electronic ones. Thus the team has begun “cracking the code” of living cells. 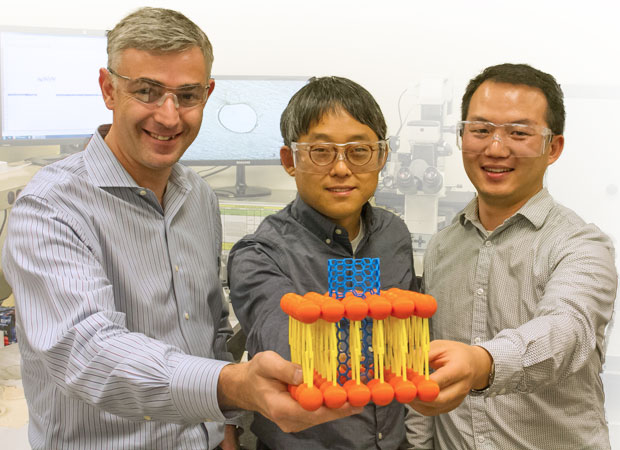 Livermore scientists (from left to right) Alex Noy, Kyunghoon Kim, and Jia Geng hold up a model of a carbon nanotube that can be inserted into live cells, an achievement with potentially revolutionary applications in medicine and other fields. (Photograph by Julie Russell.)

With the sensing device in place, the team’s next step was to create synthetic analogs to the protein channels that regulate the flow of molecules through the cell membrane. Noy explains, “These protein channels are quite amazing. They operate with high efficiency and exquisite selectivity. In membranes, they form pores that open and close, work as pumps, and even act as voltage-gated ion channels.”

The same basic approach as the nanowire sensing device was also used in designing a new way to transport large molecules into a cell. In ongoing projects funded by Livermore’s Laboratory Directed Research and Development Program and DOE’s Office of Basic Energy Sciences, Noy and his team are developing and testing artificial, inorganic ion channels comprising nanometer-scale tubes of carbon—carbon nanotubes. Their collaborators include researchers from the Molecular Foundry at Lawrence Berkeley National Laboratory, the University of California’s Merced and Berkeley campuses, and Spain’s University of Basque Country.

The inner channel of a carbon nanotube is narrow (approximately 1.5 nanometers across), hydrophobic, and very smooth—all properties that mirror those of biological pores. “We start with commercially produced carbon nanotubes that are tens of micrometers in length and use a special technique based on sound-wave energy to cut them into pieces about 5 to 15 nanometers in length, which is close to the thickness of the lipid membrane,” says Noy. Earlier experiments and simulations indicated that a carbon nanotube of such a length would self-insert into the membrane to form what is essentially an artificial pore. “Our focus was to see if these carbon nanotubes, or nanotube porins, as we call them, could be used for membrane transport,” adds Noy. The team showed that nanotube porins did indeed spontaneously self-insert into the lipid bilayer, at an angle perpendicular to the membrane plane, and did the job they were intended to do—transporting ions successfully in and out, just like actual protein-based cell pores do.

The researchers measured transport rates of individual porins as well as porin ensembles. They placed porin-pierced liposomes (small spheres of lipid bilayers) in a high-salt solution. “The concentration gradient creates a driving force for diffusion,” explains Noy. In single-pore experiments, the porin transported single-stranded DNA at a speed compatible with nanopore sequencing. In this type of sequencing, a narrow nanotube forces a coiled nucleic acid to unravel, transporting the nucleotides in single file. Each nucleotide changes the ion flow and affects the current differently, generating a signal that reveals the DNA sequence. If achievable with porins, this revolutionary new sequencing technique would require minimal sample preparation and be less expensive and faster than other techniques, making it possible to sequence bigger genomes in a practical length of time.

In addition, the team demonstrated that these synthetic pores can also spontaneously insert into the membranes of live mammalian cells and perform the same functions as protein pores. Using the patch-clamp technique, which records the currents of single or multiple ion channels in cells, they found that porins that self-inserted into the membranes of living cells have the same conductance dynamics as laboratory-produced lipid-bilayer membranes. This work suggests the potential to reproduce biological functionality in a synthetic platform that would be integrated with living cells, such as replacing damaged natural pore channels with man-made “spare parts.” 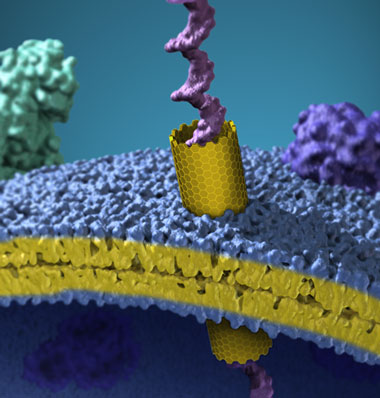 In this artist’s view, a carbon nanotube has been inserted through the plasma membrane of a cell, forming a strawlike tunnel through which molecules can pass into the cell. The image shows a single long strand of DNA passing through that tunnel, illustrating one of many possible ways of using these artificial “pores” to deliver drugs or other molecules into targeted cells. (Image courtesy of Xavier Studios.)

A Wired Future for Bio

Looking to the future, Noy sees many possible applications for this seamless meld of living cells and electronic systems. Short of the science-fiction possibilities of a direct brain-to-computer connection, possible applications in biosensors and medicine include delivering drugs to specific tissues and treating the many human diseases that involve ion-channel defects, such as epilepsy, cardiac arrhythmia, and cystic fibrosis. In addition to DNA sequencing, carbon nanotube porins could also further research in nanosensors and synthetic cellular interfaces. A “kit” of pores could be assembled in different ways in Lego-like fashion, to form custom biological circuits. “We have a system and device that are biocompatible, robust, and small,” says Noy.

For the near future, the team plans to explore the integration of carbon nanotube porins with biological organisms. Beyond that, the sky is the limit for these tiny devices that enable cells and circuits to speak the same language.