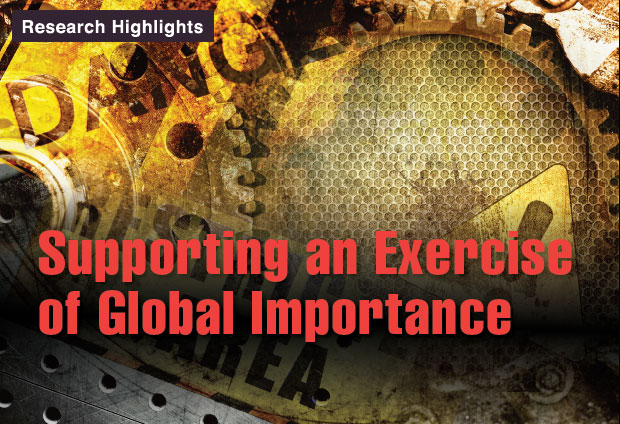 Somewhere in a remote part of the world, the ground trembles with terrific force. The underground rumbling awakens a sensor network that measures the seismological, radionuclide, hydroacoustic, and infrasound qualities of the event. The sensor-captured information also triggers a globally coordinated investigation to confirm whether the source of the tremor is an illicit nuclear explosion.

In 1996, the United Nations opened for signature the Comprehensive Nuclear-Test-Ban Treaty (CTBT), which bans any kind of nuclear explosion anywhere on the planet, including nuclear test explosions. Until the treaty is ratified by all required states and comes into full force, the Preparatory Commission for the CTBT Organization (CTBTO) is provisionally operating the worldwide monitoring network. Based in Vienna, Austria, CTBTO is also developing an overall verification regime for when the treaty enters into effect.

When requested by a CTBT member state, a CTBT executive council will review the findings of monitoring activities (see Seismic Research Making Waves) and determine whether further investigation is warranted for a suspected treaty violation. When the council deems that an investigation is justified, a team of 40 inspectors will be granted a small window of opportunity—only 140 days—to conduct a rigorous on-site inspection (OSI) in the area of interest. In this allotted time, the team must search a 1,000-square-kilometer area to find the suspect site. Fortunately, the team has at its disposal a wide range of technologies to narrow down the geographic area and identify any relevant materials. Some of these systems can capture or detect the radioactive materials and gases that provide the best evidence of whether a nuclear explosion has indeed occurred.

With support from the National Nuclear Security Administration’s (NNSA’s) Office of Nuclear Verification, Livermore scientists and engineers took part in CTBTO’s Integrated Field Exercise 2014 (IFE14). An event of unprecedented scale—involving more than 200 participants—IFE14 was hosted in Jordan and simulated nearly all the steps of an OSI, from the initial request for inspection to the return of all equipment and personnel to their home bases. Several years in the making, the exercise tested the current state of OSI capabilities and demonstrated how seamlessly a set of techniques could be integrated into a comprehensive system to detect the signatures of an underground nuclear explosion. Livermore technologies that identify radioactive isotopes and collect subsurface noble gas emissions featured prominently in the exercise, and Laboratory scientists participated as subject-matter experts and role players. The five-week exercise provided insight into the execution of an OSI and the functionality of the technological assets to deploy during an actual inspection. 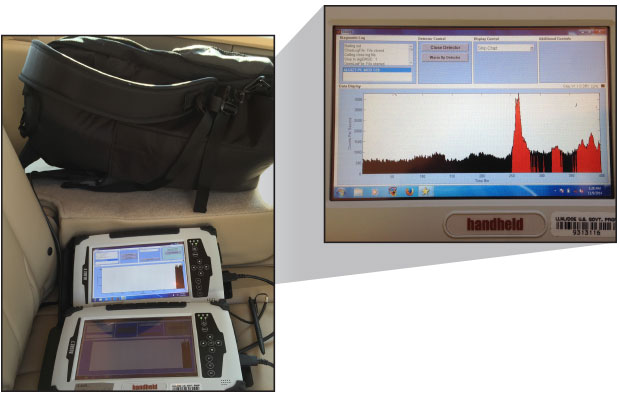 During the Integrated Field Exercise 2014 (IFE14) of the Preparatory Commission for the Comprehensive Nuclear-Test-Ban Treaty Organization (CTBTO), car- and backpack-transportable radiation detectors developed at Livermore were used to validate the performance of similar technologies used by the inspection team. The detectors are based on Livermore’s Adaptable Radiation Area Monitor, winner of a 2005 R&D 100 Award.

To be suitable for an OSI, a technology must be reliable, robust, mobile, and operable by inspectors who, although cross trained in many techniques, may not be experts in that specific technology. It must also effectively separate background radiation emitted by benign sources, such as medical isotopes used in hospitals or those that occur naturally in the environment, from radiation related to a nuclear explosion. “Our goal is to detect and characterize relevant radiation sources that could trigger an international assessment of whether there has been a treaty violation,” explains Steven Kreek, a Livermore radiochemist and leader of the Nuclear Detection and Countermeasures Research and Development Program in the Laboratory’s Global Security Principal Directorate. “No one technology can do it all,” adds Kreek. “It’s about using an array of techniques to first reduce the search area and then make specific, localized measurements to pinpoint a possible detonation site.”

Lawrence Livermore’s portable radiation detectors were used in the setup stage of the exercise. These sodium-iodide-based gamma-ray detection devices were either carried in a backpack to survey rough terrain or deployed by automobile to search for anomalies indicating a possible hot spot. The devices were used in the OSI exercise to quickly detect buried radiation sources and to experimentally validate the anticipated performance of other similar technologies used by the inspection team. Kreek, who served on the IFE14 control team, explains, “Our tests with these detectors during the setup phase of the exercise helped to validate whether the CTBTO inspection team could observe what the control team wanted them to observe.” The detectors were based on Livermore’s Adaptable Radiation Area Monitor, winner of a 2005 R&D 100 Award. (See S&TR, October 2005, Detecting Radiation on the Move.) The highly efficient, easily transportable device, also a sodium-iodide-based system, was initially developed for first responders, who typically have limited expertise in operating radiation detectors.

Sodium-iodide-based devices have low energy resolution, which limits their use to finding and localizing radiation anomalies rather than characterizing the radiation sources in great detail. During the inspection, higher energy-resolving germanium-based instruments were used to detect, identify, and quantify surface-deposited radionuclides and characterize specific sites. Previously, the application of solid-state germanium-based gamma-ray detectors was hindered by their need for cryogenic cooling, usually with hazardous, difficult-to-transport liquid nitrogen. A decade ago, however, Livermore scientists made these instruments more field deployable with a portable, battery-powered, integrated electromechanical cooling system.

Livermore’s electromechanical cooling system has also been incorporated into several other Laboratory-developed and now commercially available gamma-ray detectors, some of which were featured at IFE14. For example, ORTEC’s Detective, a portable gamma-ray detector, was used to quickly and accurately survey areas of hundreds of square meters and identify sources of interest. “It is important to note,” says Kreek, “that many of these gamma-ray detectors were loaned to CTBTO by different countries for the exercise. Such widespread adoption illustrates the far-reaching impact Livermore’s detection technology and its electromechanical cooling approach have had in making high-resolution gamma-ray spectroscopy field portable.” ORTEC has broadly adopted the cooling technology for its high-purity germanium detectors, including the model loaned by Idaho National Laboratory for IFE14. 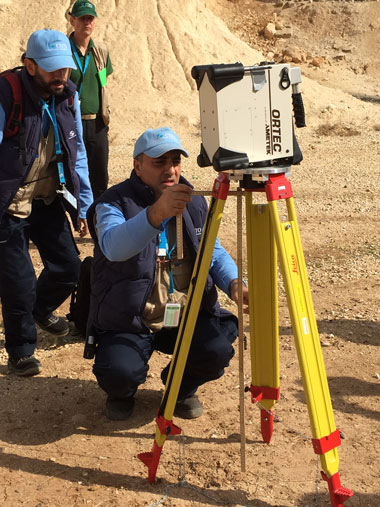 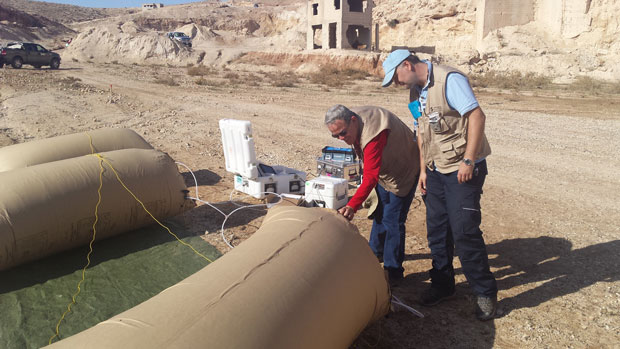 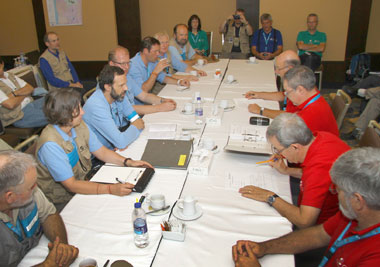 At the end of IFE14, members of the CTBTO inspection team (left, blue shirts) meet with members of the inspected-state party (red shirts) to deliver the preliminary findings.

Detecting significant levels of radioactive noble gases in the soil provides the highest level of certainty that an underground nuclear explosion has recently occurred. In fact, specific isotopes of xenon and argon are considered the “smoking gun” for a nuclear explosion. Livermore geophysicist Charles Carrigan explains, “We can extract these gases from the subsurface to get a better idea of what has happened underground.” In 1996, Carrigan was the lead author of a seminal scientific paper that demonstrated for the first time how the presence of noble gases, specifically isotopes of xenon and argon, could be used as fingerprints of a nuclear explosion. (See S&TR, January/February 1997, A Powerful New Tool to Detect Clandestine Nuclear Tests.) The soil-gas-sampling techniques used for that work have since provided the basis for some OSI protocols and have resulted in the development of Livermore’s Smart Sampler, which autonomously captures subsurface gas from locations suspected of containing enhanced levels of noble gases. (The Smart Samplers used in IFE14 were provided by NNSA’s Office of Proliferation Detection.)

The Smart Sampler collects samples by either extracting gases directly from a sampling tube inserted to a shallow depth—3 to 10 meters—in the subsurface or from a coil of perforated tubing laid out on the ground and covered by a tarp or plastic sheet to prevent atmospheric infiltration. A single Smart Sampler can draw gases from five such sampling locations simultaneously. Computer-controlled flow meters and valves route the gases for sample collection and transport back to a laboratory for analysis.

Tracer gas studies had previously demonstrated that atmospheric pressure fluctuations strongly influence concentrations of surface-collected gases from an underground explosion. Carrigan and other Laboratory scientists, however, were the first to show that the efficiency of collecting noble gases might also be dramatically improved by triggering collection to rising subsurface radon concentrations. Radon is a noble gas produced by the decay of naturally occurring underground uranium. Says Carrigan, “We can potentially use radon as a natural tracer gas, observed in real time by the Smart Sampler, as an an indicator of higher concentrations of the far more difficult-to-measure argon and xenon gases we really care about.” Existing at higher concentrations below the surface, radon is also a good indicator of whether the sampling tube is collecting gases only from the subsurface or also from infiltration from the atmosphere, which would be indicated by a precipitous drop in measured radon levels.

When aboveground barometric pressure drops below subsurface pressure, the resulting pressure gradient allows subsurface gases to flow out more freely. “Bad weather, including snow and thunder storms, are often associated with such barometric pressure drops,” says Carrigan. “The resulting conditions on the ground can pose serious health and safety risks to anyone manually operating the equipment at the time when gas collection is best.” The Smart Sampler solves this problem with its capability to automatically begin sampling according to atmospheric pressure or radon levels. “When the system senses a fall in barometric pressure or an increase in radon level, it begins sampling and can take several two-cubic-meter gas samples a day,” states Carrigan. Another advantage of this device over manual sampling systems is that it can monitor its own power supply and lower power consumption to prevent damage to the batteries until recharging. The Smart Sampler even has sensors to detect when tampering occurs—an important feature in a potentially hostile environment.

During IFE14, the Smart Sampler collected gas samples from several sites for analysis at the inspection team’s base of operations. “Although I was involved in the scenario in the role of the inspected-state party, I was also available to help make sure the systems were running properly,” says Carrigan. “At one point, the inspection team thought the equipment was being tampered with by the inspected-state party, and I was able to show that the systems were simply operating as deployed by the inspectors.” As the scenario played out, one of the sites provided subsurface noble gas samples consistent with a simulated underground nuclear explosion. Should the need arise in the future, the Smart Sampler can thus be a valuable tool for providing nearly irrefutable proof of a treaty violation.

IFE14 provided an opportunity for CTBTO and its technical support teams to further develop and evaluate their on-site verification process and to test the capabilities for when the treaty enters into force. For Livermore and other organizations that develop detection technologies deployable by CTBTO, the exercise also demonstrated how their technologies could work in concert to collect evidence of a nuclear explosion. The results were highly encouraging.

Nuclear security is a paramount responsibility and an ever-increasing challenge faced by the global community. Lawrence Livermore has a long history of studying nuclear debris and developing radiation detection technologies and other diagnostics, stemming from decades of research and experience with nuclear weapons design and explosive testing. Today, Livermore’s expertise in this area is leading to innovative technologies that are improving our detection capabilities for present and future applications, including a reliable inspection toolkit for the global community’s nuclear nonproliferation efforts.