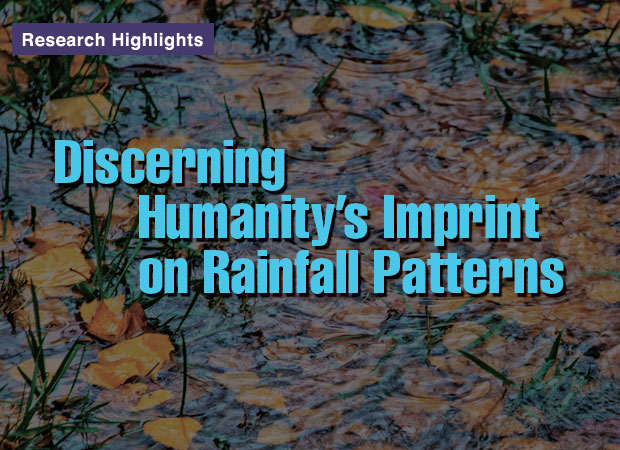 It's the perfect storm. At a time when global demand for water is rising rapidly due to population growth, urbanization, industrial activities, and expanded use of crop irrigation systems, climate change may be altering the timing, location, and amount of rain and snow that fall on large swaths of the planet. Computational models indicate that increases in global surface temperatures will redistribute rainfall in two ways. First, warmer air, which holds more water vapor, will intensify existing precipitation and drought conditions. That is, more rain will fall in wet areas, and evaporation will increase in drier areas. Second, shifts in atmospheric circulation patterns will push storm paths and subtropical dry zones toward the poles.

Satellite records for the past few decades show that rainfall patterns worldwide are changing. If the observed trends continue, they could magnify existing problems with water scarcity, food shortage, and possibly even political instabilities, thereby transforming an environmental concern into a global security issue. Are these changes indicative of global warming, as predicted by models? Are the pattern shifts caused by naturally occurring fluctuations or human-induced (anthropogenic) forces, such as greenhouse-gas emissions and ozone depletion? Determining the answers to these questions may help policy makers develop strategies for mitigating or adapting to the changes. However, extracting this information from global precipitation data can be challenging.

The models that scientists use for climate predictions are generally poor at simulating the exact location and magnitude of Earth’s major precipitation features. Because of these inaccuracies, the changes that individual models project in rainfall intensity and atmospheric patterns may be canceled out when results from several models are averaged together. In addition, “noise” from short-term climate fluctuations can drown out potential evidence of more permanent changes.

Livermore physicist Kate Marvel and climate scientist Céline Bonfils have developed a straightforward method for detecting trends in both the location and intensity of global precipitation and ascribing causes to these trends. Their study was funded by Livermore’s Laboratory Directed Research and Development Program and an Early Career Research Grant awarded to Bonfils by the Department of Energy. Results from their research show for the first time that certain changes displayed in the observational record of global precipitation patterns most likely result from human activities rather than from natural climate variability.

Marvel and Bonfils, who work in Livermore’s Program for Climate Model Diagnosis and Intercomparison, began by examining monthly rainfall data compiled from rain gauges and satellite observations as part of the Global Precipitation Climatology Project (GPCP). Because Earth’s major circulation patterns undergo a seasonal north–south migration, the researchers focused on a single season—winter in the northern hemisphere—to prevent the cyclical behavior from muddying evidence of longer term trends. They compiled rainfall data for the winters of 1979 through 2012 and applied a smoothing technique to filter out the noise from small-scale precipitation patterns. They then averaged precipitation results at a given latitude over all longitudes and identified the wettest and driest regions.

Data from each winter displayed three peaks and two troughs in precipitation. The peaks represent the rainfall in the equatorial tropics and a band of storms at the midlattitudes in both hemispheres. The troughs correspond to subtropical latitudes where many of the world’s deserts are located. Bonfils and Marvel used the inflection points for these five features to gauge the approximate width of the rainy and dry zones. In reducing 32 winters of rainfall data to 32 sets of peaks, troughs, and inflection points, they defined two indicators: a dynamic indicator measuring changes in the location of wet and dry regions, and a thermodynamic indicator measuring the amount of precipitation in those regions. 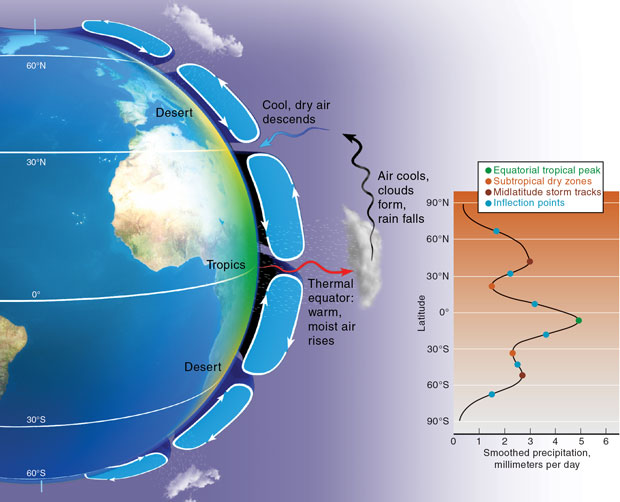 (left) Wind circulation patterns in each hemisphere help transport moist equatorial air toward the poles. These loops are driven by such properties as Earth's size, rotation rate, atmospheric depth, and heating. (right) A smoothed map of satellite data reveals distinct zones of wet and dry land produced by the circulation patterns. Livermore researchers used this information to detect changes in the location and intensity of global precipitation over the past three decades. (Rendering by Kwei-Yu Chu.)

Spotting location and intensity trends in the satellite data was merely the first step. “Climate science is somewhat like detective work,” says Bonfils. “It’s not enough just to find the crime—we also want to identify the culprit. We want to know what is causing the observed changes.” Establishing a unique response pattern, or fingerprint, for precipitation changes would help researchers compare model results with GPCP data and determine causes for the observed trends. (See S&TR, June 2012, Seeking Clues to Climate Change.)

While performing the smoothing and peak detection procedure on the data sets, the researchers noted significant differences in where individual models located precipitation extremes. Bonfils says, “We decided to focus on the patterns—peaks, troughs, and inflection points—and the relative changes to those patterns, rather than on the exact latitude of the events.” Tracking location shifts in these features rather than the latitude identified in the satellite observations allowed the researchers to bypass model location inaccuracies. Then they used a statistical technique called principal component analysis to examine correlations between the different data sets and formulate a characteristic spatial pattern that explained most of the similarities. This pattern served as the precipitation fingerprint for climate change.

Of primary interest was the simulated behavior of the El Niño Southern Oscillation (ENSO). One of the largest natural contributors to climate variability, ENSO is characterized by sporadic and prolonged alterations in surface temperatures in the tropical Pacific Ocean—fluctuations that can affect atmospheric circulation and rainfall patterns over much of the globe.

The team’s modeling results indicate that during El Niño events, the wet tropical region becomes wetter, and atmospheric features shift toward the equator. El Niño’s counterpart, La Niña, pushes circulation patterns toward the poles but does not intensify existing rainfall patterns. These findings verified the utility of the precipitation fingerprint. Individually, rainfall intensification and poleward circulation movement are consistent with natural variability. Taken together, those trends allowed the researchers to distinguish human-induced global warming from natural climate behavior.

Next, the researchers established that, per the observational data, the wettest latitudes were becoming wetter and the driest latitudes drier, while the storm tracks and subtropical dry zones had shifted toward the polar regions—findings that were consistent with theoretical and model predictions. The fingerprint is present in the observational data, and the two are increasingly correlated over time. As anticipated, ENSO patterns did not match the fingerprint. These results indicate that the changes in the GPCP data for precipitation intensity and location were likely caused by external factors rather than internal climate variability.

Further confirmation was needed to ensure that the upward trend was not a coincidence and that GPCP data patterns were not simply a product of natural variability. Using more than 25,000 years of data from the preindustrial control simulations, Marvel and Bonfils established that the observed trend was very unlikely to result from internal climate variability alone.

Although they had eliminated a potential explanation for the observed trends, other possibilities remained. Human activities, natural events, or a mix of natural and human factors could be responsible for the precipitation changes. Results from a CMIP5 model incorporating only natural external influences did not match the fingerprint nearly as well as results from models with human influence included, suggesting that the observed trends result from human activities.

“This finding makes sense, based on our understanding of physics and atmospheric science,” says Marvel. “Volcanic eruptions and solar fluctuations certainly affect precipitation patterns, but only anthropogenic factors are likely to result in a pattern that matches the fingerprint.” She notes that the natural external influence scenario simulated only 26 years of climate behavior, a briefer span than other scenarios considered. “With the shorter period, we can’t entirely rule out natural effects,” she says, “but the evidence is strong that the pattern change is due to human activities.”

As a final step, the researchers used the fingerprint to investigate the roles of specific human activities in precipitation changes. They found that the release of chlorofluorocarbons and other gases that deplete the ozone layer helps explain some of the observed poleward shift in atmospheric circulation features. However, greenhouse gases are likely the largest contributor to recent precipitation trends. 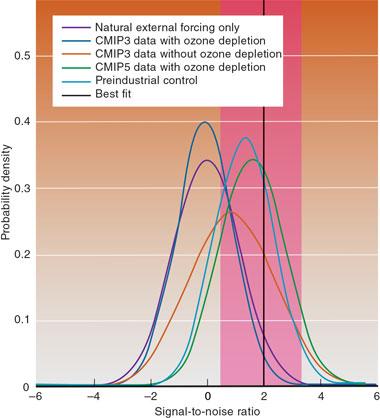 This graph shows the probability distributions of signals (that is, the similarity to the fingerprint) arising from various sets of climate simulations. The preindustrial control and natural forcing distributions are centered around zero because climate noise (from internal and natural variability) is not expected to resemble the human fingerprint, except by chance. The observed signal (black line) is outside and incompatible with those distributions at the 95-percent confidence level. The observed signal is, however, located near the mean (pink bar) of the forced distributions that include both natural and human-caused external influences, indicating that human activities are likely contributing to the two effects incorporated into the Livermore-defined fingerprint. CMIP3 and CMIP5 refer to the third and fifth phase of the Climate Model Intercomparison Project.

From Rainfall to Clouds

By narrowing their study to two climate mechanisms for precipitation changes and widening their outlook to the global scale—where confidence in model accuracy is higher than it is at the local level—Marvel and Bonfils showed that the changes observed over the past few decades of satellite data are external in origin and most likely a result of human influences. Their study builds on the work of Livermore scientists Benjamin Santer and Karl Taylor, who pioneered techniques for studying and comparing climate models and using fingerprints to evaluate the relative importance of various climate change drivers. The CMIP5 archive has served as an important resource for this project and others. In fact, the CMIP5 results used by Marvel and Bonfils formed the scientific backbone for the Fifth Assessment Report of the Intergovernmental Panel on Climate Change, which planners and policy makers will use to help prepare for and respond to climate change.

Marvel is now applying the same methods to study cloud patterns, the leading source of model uncertainty. Clouds are a vital part of the climate change equation because they can either mitigate or accelerate warming, depending on their height. Bonfils is incorporating findings from the precipitation project into her broader effort to understand the precursors to drought. “The precipitation study has helped me develop a more complete picture of what will happen in the future,” says Bonfils. “I find that being able to highlight simple patterns in a complex ensemble, as we did here, is the most interesting part of a project.”