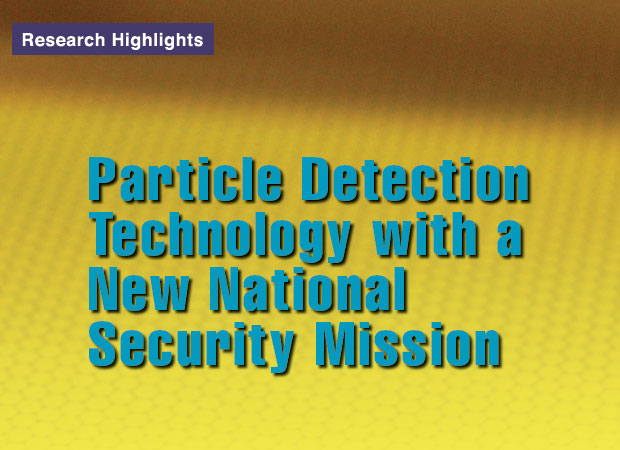 Since the 1970s, time projection chambers (TPCs) have been valuable tools for high-energy physics research, especially for tracking and identifying particles produced in accelerator experiments. TPCs are gas-filled devices that measure the trajectory and energy of charged particles in motion. This established technology is being further advanced to resolve a significant challenge in nuclear physics.

Lawrence Livermore scientists are leading a collaboration, called the Neutron Induced Fission Fragment Tracking Experiment, to develop a TPC for improving the accuracy of nuclear cross-section measurements—essential data for stockpile stewardship and commercial nuclear reactor design and operation. The collaboration, which includes several national laboratories and universities, is funded by the National Nuclear Security Administration through Livermore’s Campaign-1 Science Program in the Weapons and Complex Integration Principal Directorate and previously by the Department of Energy’s Office of Nuclear Energy.

Nuclear cross sections are a measure of the probability that two particles will react. Precise measurements are notoriously difficult to obtain for neutron reactions on actinides, specifically plutonium-239 (239Pu). Fission chambers, the traditional technology for this application, have achieved accuracies within 2 to 3 percent for neutron energies below 14 megaelectronvolts. “The fission TPC measures the energy-dependent neutron-induced fission cross section of the major actinides, 239Pu in particular, to an uncertainty of less than 1 percent,” says Livermore physicist Mike Heffner, who leads the collaborative effort.

The significant improvement stems from a TPC’s inherent ability to record the ionization track of a charged particle in three dimensions. (See S&TR, April/May 2009, A Time Maching for Fast Neutrons.) As a result, scientists can substantially reduce systematic errors and more accurately identify particle type. They can also measure target and beam nonuniformities and quantify neutron flux rates, all of which help improve data fidelity.

Standard TPCs were designed to measure particle energies exceeding many gigaelectronvolts. At these high energies, only a portion of the ionization track can be recorded because the particle exits the chamber before it comes to a stop, thus leaving a low density of ionization in the chamber. The fission TPC is designed for the opposite extreme—examining highly ionizing particles that result from fission reactions. The inaugural demonstration of these capabilities is being conducted at the Los Alamos Neutron Science Center (LANSCE) at Los Alamos National Laboratory in experiments with 239Pu. The fission TPC will reduce measurement uncertainty in 239Pu cross sections by at least a factor of 3. It also has the potential to record other neutron-induced charged-particle reactions with high precision. 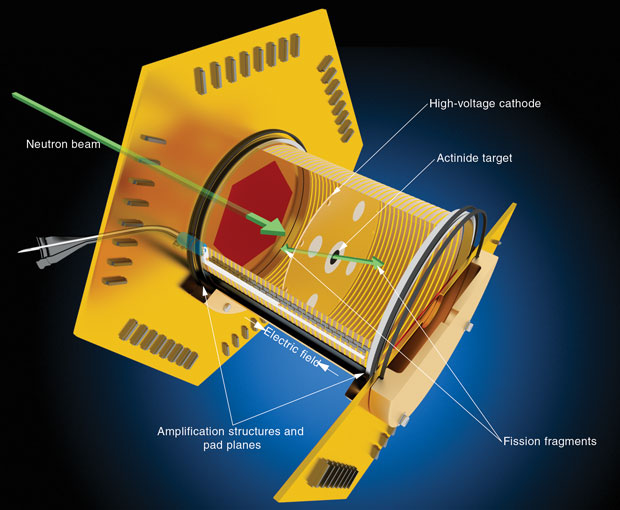 Inside a fission time projection chamber (TPC), neutrons induce fission reactions in a thin actinide target at the center of the device. The resulting fission fragments exit either side of the target, leaving an ionization track that is recorded using a micromesh gaseous amplification structure and electronics at the ends of both chambers. (Rendering by Ryan Chen.)

During a fission reaction, an incoming neutron excites a nucleus that splits into smaller, lighter nuclei, called fission fragments, which can be measured by gas ionization detectors such as fission chambers and TPCs. Fission chambers measure only the total energy deposited in the gas. TPCs, on the other hand, record the charged particle trajectories in the active gas volume in three dimensions (3D). “In simple terms,” says Heffner, “a TPC is like a digital camera that takes a 3D ‘picture’ of an ionization event.”

The fission TPC is a compact (15-centimeter-diameter), two-chamber device with an actinide target in its center. A neutron beam aimed orthogonally at the target induces fission in the target material. Fission fragments exit either side of the target and ionize the gas, separating atoms from their electrons along the path of the fragment. An electric field prevents the ions and the electrons from recombining. Instead, it forces the electrons toward sophisticated gaseous electron multipliers and electronics at the ends of both chambers. The amplification structures contain about 6,000 hexagonal pads that collect the electrons and measure their combined charge.

Amplifier and data-acquisition systems connected to the pads acquire a two-dimensional set of coordinates for each cluster of amplified electrons. “The drift speed of the electrons is approximately 5 centimeters per microsecond,” says Heffner, “and the fission TPC records the time that ionization occurs. With that information, we can project back in time to get the spatial (third) dimension, hence the name time projection chamber.” The 3D image of the ionization track provides the particle’s trajectory and ionization energy loss, which are used to identify the particle type and the position of the nuclear interaction. With this more complete information, researchers can assess systematic errors with better accuracy. Using one device to acquire all of this information greatly improves measurement precision, reducing uncertainty to less than 1 percent. 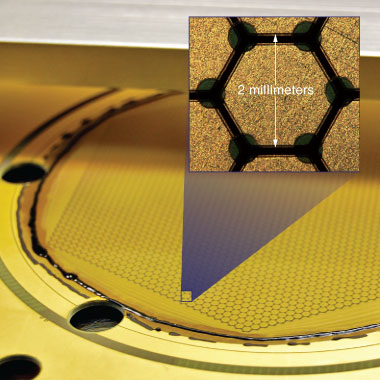 Each of the two amplification structures contains about 3,000 millimeter-sized hexagonal pads (inset) that collect electrons and record their charge. 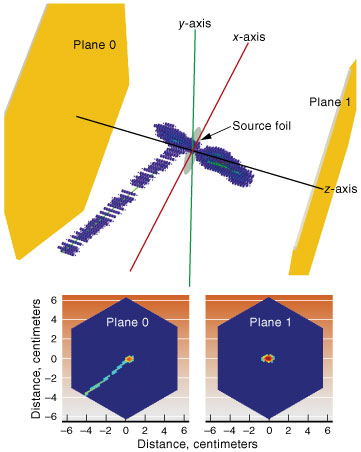 Data from a TPC test show measurements for a single fission event. The top diagram illustrates the fission event and the resulting ionization tracks. The bottom plots are a projection of the same event as recorded on each amplification pad plane. Colors indicate the amount of charge, where blue is sparse and red is dense.

Resolving data uncertainties will improve the design and operation of nuclear reactors and help maintain the nation’s nuclear weapons stockpile. “The greatest sources of error are particle species differentiation, target and beam nonuniformity, and the cross-section uncertainty of the reference material,” says Heffner. The fission TPC dramatically reduces these uncertainties by quantifying the known and suspected systematic errors in fission chamber measurements.

Fission chambers record only the total amount of energy that a fission event deposits in the chamber. Unfortunately, different types of particles—fission fragments, alpha particles, and neutrons scattering off the target chamber—can produce events with similar energies, skewing the data. The fission TPC records both the deposited energy and the length of the ionization track, which depends on each particle’s mass and charge. Heavy fission fragments lose energy quickly and thus leave short ionization tracks, while alpha particles have longer trajectories. When track ionization is plotted as a function of distance, those for alpha particles have a pronounced spike, or Bragg peak, which indicates an increase in energy loss. The ionization information for each particle, including Bragg peak data, enables the fission TPC to distinguish particle type.

Target and beam nonuniformities also affect measurement uncertainty. Target mass is typically recorded by alpha counters outside the diagnostic instrument. Once a target is placed inside a fission chamber, nonuniformities cannot be corrected with precision. The fission TPC measures where each alpha particle is emitted from the target, providing a map of the target’s thickness. With this method, the target can be characterized to within a few hundred micrometers because the ionization tracks point back to precise locations on its surface.

The fission TPC also measures neutron beam profiles by tracking another kind of interaction—ions recoiling from the neutrons that scatter on the drift gas. In this reaction, a neutron collides with a hydrogen atom in the gas, causing a proton to recoil at an angle as it is knocked away from its electron. The proton continues to ionize the gas, leaving its own ionization track. “The fission TPC allows us to use one device to measure the uniformity of the target and beam at the same time and as a function of neutron energy,” says Heffner. With the target thickness map and the beam profile, researchers can directly compute the cross section, reducing the effect of systematic errors in fission chamber measurements.

Up to New Tricks

Data collected from the LANSCE experiments will demonstrate the ability of the fission TPC design to measure nuclear cross sections and its efficacy as a replacement for fission chambers. Acquiring more precise and accurate cross-section data is key to the Laboratory’s missions and improving nuclear security both in the U.S. and abroad.

The collaboration’s work also serves as a model for reengineering established technologies to address other challenges. For more than four decades, TPCs have been an effective particle detection device for basic scientific research. Now, they are being applied to other issues of global importance.