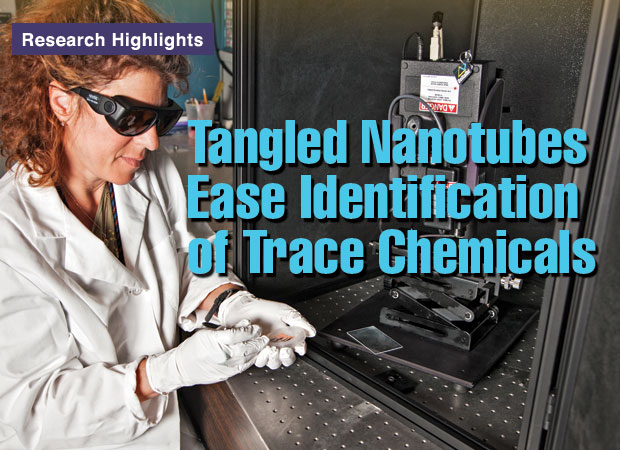 When identifying trace amounts of biological and chemical toxins in the environment—whether for homeland security, forensics, or medical applications—the smaller the amount that can be detected the better. A sensitive and reliable ideal detector would also be cost-effective and portable. A Lawrence Livermore team led by Tiziana Bond of the Engineering Directorate has been exploring various solutions to this challenge. In collaboration with Ali Altun, Hyung Gyu Park, and others from the Swiss Federal Institute of Technology (ETH) in Zurich, the Livermore team has developed an innovative method to create tangled forests of double-coated carbon nanotubes that improve the sensing capability of existing devices, making it possible for researchers to detect a single molecule.

Looking for an Elusive Signal

These easily reproducible nanotube structures are a result of research conducted by Bond and others directed at raising the sensitivity of surface-enhanced Raman spectroscopy (SERS) techniques used for nondestructively identifying trace substances. Early research efforts began with funding from Livermore’s Laboratory Directed Research and Development Program. (See S&TR, July/August 2011, Going Smaller, Raising Sensitivity.) With Raman spectroscopy, molecules of a material are first illuminated by fixed-frequency light (visible light limited to a single frequency). In response, these molecules exhibit inelastic scattering closely related to their vibrational and rotational modes, emitting light in the process. The emitted light includes frequencies that differ from the fixed frequency of the irradiating light, producing a frequency pattern, or fingerprint, unique to the material. Such fingerprints help detect and identify substances such as biological and chemical toxins that could be used in a terrorist attack. The smaller the amount of a substance, the weaker its signal. However, some toxic materials can be deadly even in minuscule amounts, so detecting their weak signals is especially important.

With SERS, a metallic surface is used to amplify the signal, which is then recorded by a spectrograph. Many researchers, including Bond and her colleagues, have been searching for ways to improve the ability of the SERS technique to amplify weak signals in detector systems. A class of SERS-based detectors use substrates of vertically oriented, carbon nanotube “trees” coated with metal and assembled into densely packed miniature “forests.” However, in this configuration, the strength of the signal emitted by the surface is weakened when charges are quenched at the interface of the nanotubes and the metal. As a result, the signals are strong enough for detection only when a significant quantity of the material is present.

Breakthrough to a Stronger Signal

Bond and her colleagues solved this conundrum by depositing a layer of hafnium dioxide (hafnia) near the active surface of the carbon nanotubes and then a layer of gold. The hafniacreates a dielectric barrier between the gold outer layer and the carbon nanotube, reducing the loss of photons down the shaft of nanotubes. “The hafnia layer also encourages the nanotubes to bunch up, similar to a tangled forest canopy,” says Bond. This bunching generates a high density of deep holes or open spaces beneath the tips of the nanotubes. The randomly arranged, nanometer-sized holes, or “hotspots,” allow scattered light to pass through. Having multiple metallic nanocrevices leads to the extreme amplification of very weak signals.

The team arrived at this configuration after first experimenting with various substrates, coatings, and processing methods. The researchers eventually developed a technique to grow the dense, tangled forests of micrometer-long carbon nanotubes in a uniform and controlled manner. “One of our goals is reproducibility,” says Bond. “We now have a process that reliably creates a wide distribution of metallic nanocrevices, resulting in the intense and reproducible signal enhancements that this method requires for many applications.” In laboratory tests conducted with the Livermore–ETH sensors, the team detected the organic species 1,2-bis(4-pyridyl)ethylene in a concentration of a few hundred femtomoles (10–15 moles) per liter. 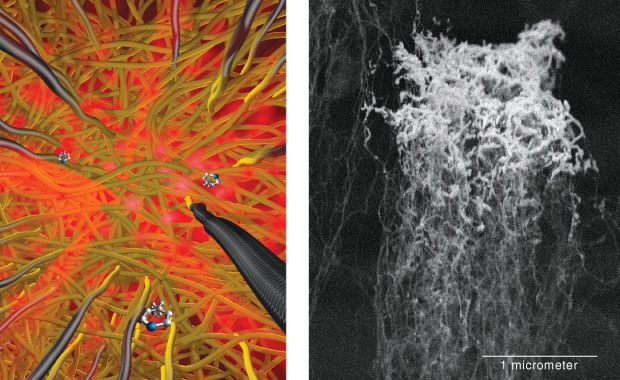 (left) A simulation and (right) a scanning electron micrograph show how the tips of the carbon nanotubes bend, touch, and tangle, forming gaps in their configuration. These gaps, or "hotspots," allow Raman-scattered light to pass through for detection. Hafnium dioxide (hafnia) forms a dielectric layer that prevents coupling between the electron energy levels of the gold outer layer and the carbon atoms in the nanotubes. (Micrograph courtesy of the Swiss Federal Institute of Technology Zurich.) 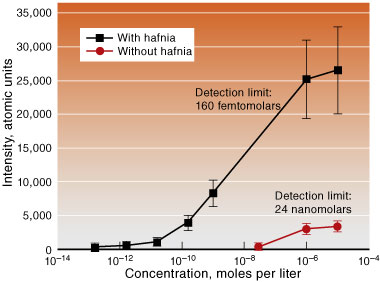 A 2.5-nanometer-thick layer of hafnia inserted between a carbon nanotube and a 21-nanometer-thick gold outer coating increases the detection capabilities of SERS. The spectra show results for a femtomolar sample of 1,2-bis(4-pyridyl)ethylene in methanol with and without the hafnium layer. 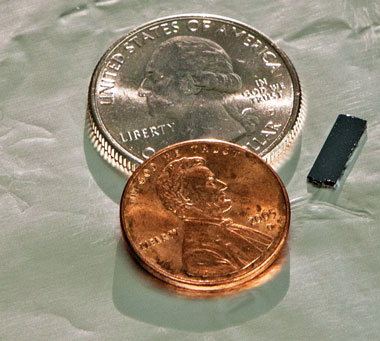 The tiny SERS sensor has many potential uses, including portable detectors for military and law-enforcement applications. (Photograph by George A. Kitrinos)

Applications Beckon from Forensics to Medicine

Bond notes that many applications are possible for a highly sensitive, reliable, and cost-effective device that can detect and identify molecules in the tiniest of concentrations. “Eventually, sensors based on this technique could be used in portable devices to analyze pollutants or pharmaceutical residues in the environment,” she says. “They could also be used by the biomedical industry for real-time point-of-care monitoring of physiological levels, such as searching in nanogram-per-liter levels for THC [tetrahydrocannabinol] or aflatoxin, which is vectored by spores that thrive in nuts, seeds, and legumes. In other applications, the sensors could offer a rapid drug-screening process for law-enforcement agencies or provide the military with early detection of chemical or biological weapons.” Bond also believes the production process itself could be used to create ultracapacitors and batteries of the future. “The resulting structures are thin and lightweight, and they contain a large surface area in a small space,” she adds.

Meanwhile, the team continues to improve the technique. The next step is to enhance the sensitivity of the sensors even further and create a portable system for field deployment. “It is a very simple system at heart,” says Bond. “I can envision a system with a sensor, a small laser to provide the fixed-frequency light, and perhaps a smart phone with a camera integrated with a portable spectrometer to capture the resulting spectrum.” That vision could become reality in the not-too-distant future. The team’s sensitive detector may be small in size, but it is large in possibilities.