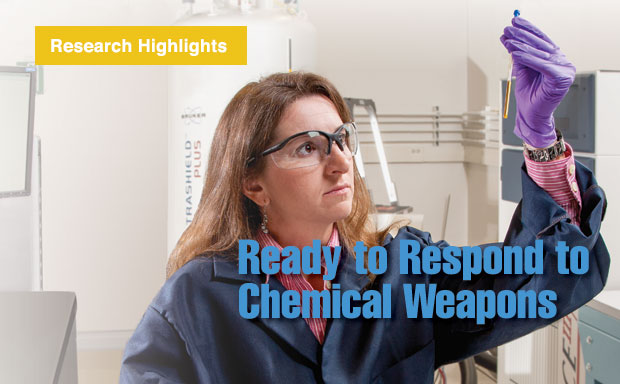 Lawrence Livermore’s Forensic Science Center (FSC) is one of just two U.S. laboratories accredited by the Organisation for the Prohibition of Chemical Weapons (OPCW) to analyze samples from suspected chemical weapon production facilities. Maintaining accreditation requires the successful completion of complex, fast-turnaround proficiency tests to identify the contents of samples spiked with unknown chemical compounds. Staying on top of this game—in which the tests get more difficult with every passing year—pushes the FSC staff to continually extend the center’s capabilities in analytical chemistry.

In force since 1997, the Chemical Weapons Convention (CWC) has been ratified by 188 countries, including the U.S., and is administered by OPCW in The Hague, Netherlands. The CWC prohibits the development, production, acquisition, stockpiling, and use of chemical weapons as well as the transfer of chemical weapon–related technologies.

Chemical weapons are easily and affordably manufactured and provide a route to inflict mass casualties. In 1988, Saddam Hussein infamously killed 5,000 Iraqi citizens with chemical weapons, and in 1995, the Japanese cult Aum Shinrikyo released the nerve gas sarin in a Tokyo subway, killing 13 people and sickening nearly 5,000.

The Challenge of Certification

Years before the CWC was ratified, the international community began to develop procedures that could be used to verify the presence of chemical weapon agents. A series of round-robin tests in the 1980s and 1990s, involving Lawrence Livermore, Edgewood, and laboratories in other countries, served to determine such protocols as how to size samples, how much to spike them, appropriate testing criteria, and chain-of-custody requirements. Livermore scientists prepared the samples for one round-robin in 1993. Chemist Armando Alcaraz, who has led the Laboratory’s OPCW work for many years, says, “Once the community was confident in its procedures, proficiency tests could begin. They began even before the treaty was ratified.”

Today, proficiency tests are held semiannually. The tests that led to FSC’s initial accreditation in 2003 occurred in November 2001, April 2002, and October 2002. To maintain certification, all OPCW-designated laboratories must maintain a three-year rolling minimum average of at least two “A” and one “B” grades.

To date, the samples examined by certified laboratories have been those prepared specifically for proficiency tests and exercises. No samples have been officially collected from an actual or suspected chemical weapon site. The proficiency tests involve analyzing and characterizing environmental samples that contain extremely dilute amounts of chemical warfare agents, precursor chemicals, and degradation materials. Other substances are always included to complicate the analysis. For each test, one OPCW-designated laboratory formulates the test samples, and another certified laboratory grades the findings. “The laboratory preparing the samples often makes the problem as difficult as possible,” says Brian Mayer, a Livermore expert in nuclear magnetic resonance (NMR) spectroscopy.

A test begins when OPCW announces a scenario. Each laboratory then has 15 days from receipt of the samples to complete the test. Samples may include soil, water, laboratory residues, or other material containing evidence of chemical weapon–related activity. “Just to make things interesting,” says Mayer, “a sample may or may not contain any evidence at all. We also cannot make any assumptions about the contents of the samples based on the scenario.”

Sarah Chinn, another NMR expert at the Laboratory, says that all other FSC activities essentially shut down for the duration of a test. A conference room is turned into a “war room.” Documentation and chain-of-custody requirements are rigorous. In the short time available, the team must execute all analyses quickly, flawlessly, and with perfect documentation.

However, the process does not always go as planned. In 2010, the FSC team received a “C” on a proficiency test. The grade was not because the team’s analysis was wrong but because of document-reporting errors, procedural problems that the team quickly corrected. However, the center’s certification was suspended for a time. Alcaraz notes that only 8 of the 22 designated laboratories have never been suspended, and just one laboratory, in Finland, has consistently received “A” grades. After passing three tests—in October 2011, April 2012, and October 2012—with “A’s,” Livermore’s FSC was recertified in early 2013.

When the 15-day countdown for a test begins, FSC chemists first divide the samples into dozens of individual batches, many of which are further processed using classical chemical techniques such as solvent extraction or chemical derivatization. “Preparing the samples for analysis concentrates the targeted compounds without obscuring or destroying them,” says Alcaraz. The prepared samples are then analyzed with an array of instruments and techniques to identify and semi-quantify their compounds. Some of these techniques are the same ones used by other facilities to detect performance-enhancing drugs in urine and pesticides in nutritional supplements.

Gas and liquid chromatography (GC and LC) coupled to various element-specific detectors are the workhorses for chemical separation and suspect-compound screening. GC and LC coupled to a mass spectrometer can detect ultratrace quantities of organic compounds weighing one-billionth of a gram or less. Because of their trace sensitivity and associated searchable chemical databases, GC and LC mass spectrometry are typically used as the initial tools to identify some of the suspect compounds.

OPCW requires that at least two analytical techniques be used for positive identification. However, the Livermore team strives to obtain confirmation from three or four methods, which may include GC mass spectrometry with chemical ionization, GC infrared spectroscopy, or NMR spectroscopy. Each instrument provides a unique set of data about the sample.

Until recently, the FSC team used NMR primarily to screen for the presence of common spiking chemicals. During the April 2012 test, the researchers were challenged when they could not identify a phosphorous-containing molecule found in the test sample. The unusual molecule did not show up in any of the GC or LC databases. Phosphates frequently appear during OPCW tests because many of the identified chemical weapon agents, including VX, soman, and sarin, are organophosphorus compounds or close relatives.

Solving this mystery required the researchers to use more sophisticated analytical technologies, and FSC’s recently purchased, top-of-the-line NMR instrument proved its mettle. It is significantly more sensitive than existing NMR instrumentation. Finding a solution with earlier equipment would have proven considerably more difficult in the required short time frame.

The team discovered that the test sample was loaded with a “red herring” phosphate molecule, which obscured the OPCW-reportable phosphorous compounds. “The sample contained almost 10 times more of the red herring than of the reportable substances,” says Mayer.

“Sometimes the instrumentation does not provide a solution,” says Alcaraz. “Then we fall back on ‘old-school’ know-how. At these times, intuition based on years of analytical experience often solves the puzzle.”

Once the FSC scientists are satisfied with every detail of a test, they must prove that the sample contains what they claim by cross-referencing their data against data from reference materials. The team purchases the reference compounds commercially, if they are available. If not, FSC’s organic chemists synthesize the precursors, pure toxin, red herrings, or degradation products, as necessary—all within the 15-day test period. 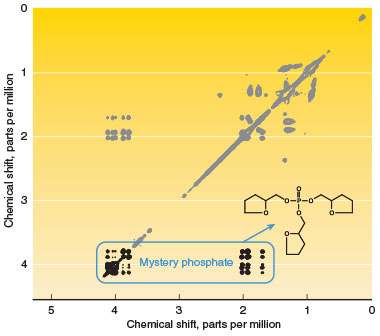 FSC scientists use complex NMR spectra such as the one shown here to identify unknown compounds in test samples. This spectrum highlights the structure of tris(tetrahydrofurfuryl) phosphate and one piece of chemical data used to characterize a mystery compound during the Laboratory’s proficiency test for recertification by the Organisation for the Prohibition of Chemical Weapons.

Because phosphate molecules appear so frequently during the tests, Mayer, Chinn, and other Laboratory scientists have made NMR even more valuable by developing a new method to zero in on organophosphorus compounds. It combines two techniques—heteronuclear single quantum coherence (HSQC) and diffusion-ordered spectroscopy (DOSY)—to edit out all proton signals except those coupled to phosphorous nuclei. A direct relationship is then established between the remaining resonances and their respective diffusivities. HSQC–DOSY has been used for carbon-13 analysis, and HSQC and DOSY have been applied individually to phosphorus-31. However, FSC is the first to combine the two techniques to not only isolate molecules containing organosphorus groups but also identify unknown degradation products. In the OPCW tests, identifying a compound’s degradation products is required as well as identifying the agent itself.

FSC scientists are also exploiting their analytical techniques for other chemical forensics programs. For example, NMR was recently applied to a proof-of-concept experiment for using cyclodextrin molecules as a means to capture tetramethylenedisulfotetramine, or TETS. This lethal neurotoxin is commonly used in China as a rodenticide. Accidental poisonings have caused hundreds of human deaths in China. TETS can be easily manufactured and is persistent in the environment, which could make it attractive for illicit activities. FSC scientists Mayer and Carlos Valdez used NMR spectroscopy to identify the real-time interactions between TETS and cyclodextrin. According to Mayer, “Our research establishes a methodology for assessing cyclodextrin candidates as a potentially powerful tool for removing TETS from a contaminated water source.”

The OPCW-certified laboratories want to be sure they have the full range of analytical capabilities that might be needed should a chemical attack occur. All of the tests to date have been on environmental samples such as soil and water. “However, if a chemical attack were suspected to have occurred, we would want the capability to test the victims’ blood or urine,” says Alcaraz. “The OPCW will need proof that an attack actually happened.” The certified laboratories, including FSC, are working together to develop appropriate protocols applicable to clinical samples, just as they did for environmental samples before the CWC was ratified. Preparedness is key to prevention and deterrence of a chemical attack.