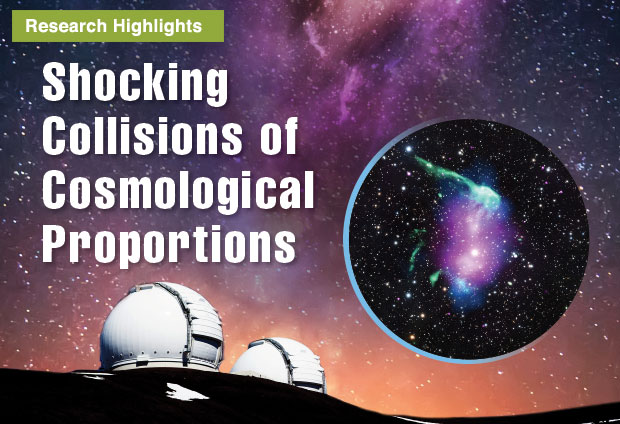 A composite image shows the “Toothbrush Cluster” with a radio relic (green). The radio relic stretches over 6 million light years in its longest dimension. Visible light data captured with the Subaru telescope appears in white. Diffuse x-ray emissions observed using the Chandra X-Ray Observatory are shown in purple. The distribution of dark matter in the cluster, inferred by gravitational lensing, is shown in blue. (Image courtesy of NASA.)

The universe works in mysterious ways, but little by little, researchers from Lawrence Livermore and other institutions are uncovering the physics behind many of today’s cosmological puzzles. One such conundrum involves the formation of radio relics (diffuse synchrotron radio sources) in merging galaxy clusters—events in which two of the universe’s most massive bound objects, each containing thousands of galaxies, collide. These radio-emission sources are millions of light years across and filled with gas or plasmas superheated to 10 to 100 million kelvins. (For comparison, the Sun’s core is about 15.7 million kelvins.)

Radio relics were initially thought to result from electrons being accelerated to relativistic speeds by shocks created when galaxy clusters collide. Observational evidence, including x-ray data, further suggested that the shocks were responsible for delivering these huge energy “kicks” to electrons. An international team, including Lawrence Livermore researcher Will Dawson, recently undertook a study to explore radio relics and the story behind their creation. What the researchers found was a one-two punch of truly cosmological proportions, involving particles being spewed from their orbits around supermassive black holes before being fast-tracked by the shocks created from the merging galaxy clusters.

Although radio relics have been observed for years, they are not well understood. Dawson explains, “Galaxy clusters are not densely packed. Just as empty space exists between planets and stars in our own galaxy, mostly empty space is found between galaxies in the clusters. So, galaxy cluster collisions look more like two objects passing through each other.” The empty space is filled with a diffuse intracluster medium of high-energy particles moving at a few thousand kilometers per second. Aside from the Big Bang, galaxy cluster collisions are the most energetic events in the universe, releasing up to about 1057 joules on gigayear timescales—more than a trillion times the expected total energy output of the Sun over its 10-billion-year lifetime. Most of the energy released during cluster collisions is converted into thermal energy and turbulence in the medium, resulting in enormous shock waves that can be likened to a plasma “sonic boom.”

Once these shock waves are formed, they propagate, compressing the magnetic fields and hot, x-ray emitting gases. As the shocks travel forward, they encounter other particles, including electrons, which get trapped in the shocks’ magnetic fields. Once captured by a field, electrons begin to spiral around, accelerating and emitting synchrotron radiation. A plausible rationale for the phenomenon was that the shock waves were causing nonrelativistic electrons to be “kicked” into relativistic regimes. However, the shocks alone were not enough to account for the observed accelerations. “We had many questions about this process,” explains Dawson. “How could the shocks possibly accelerate initially nonrelativistic particles to relativistic speeds? Could the theory be wrong? Or, were we missing a key piece of the puzzle?”

One possible theory involved “fossil” relativistic electrons, whose lifetimes in the intracluster medium are relatively short, about 100 million years. After losing most of their energy, these electrons would be invisible to radio telescopes, no longer radiating within the observable band of radio frequencies. Fossil electrons could, in theory, be efficiently re-accelerated by shocks and eventually produce bright radio relics. One theory postulated that the fossil electrons may originate from active galactic nuclei (AGNs)—compact regions in the center of galaxies emitting radiation far higher than normal. Such radiation, which can come from any part of the electromagnetic spectrum, likely results from the accretion of matter by a supermassive black hole at the galaxy’s center.

To determine whether the electrons accelerated by the cosmic shocks might have their beginnings in AGNs, the research team, which comprised scientists from 17 organizations, including Lawrence Livermore, the Harvard–Smithsonian Center for Astrophysics in Massachusetts, the University of California at Davis, Stanford University, and the National Centre for Radio Astrophysics in India, set out to find as many merging galaxy clusters as possible. Drawing from available radio-survey data from the Giant Metrewave Radio Telescope in India and the National Science Foundation’s Karl G. Jansky Very Large Array, the team began looking for evidence of shocks from merging galaxy clusters by their radio relic signature. “We started with radio data since it’s less expensive to survey large fields of view compared to the previous methods relying on x-ray plus optical surveys,” says Dawson. The team uncovered 27 cluster mergers with evidence of merger shocks, then zeroed in for more detail using optical data from the Hubble Space Telescope and the Keck and Subaru telescopes in Hawaii, as well as x-ray data from NASA’s Chandra X-Ray Observatory. Using the multi-wavelength data, the scientists discovered that several cluster galaxies contained AGNs with supermassive black holes. In particular, merging galaxy clusters Abell 3411 and Abell 3412 in the constellation Hydra (about 2 billion light years from Earth) had all the elements the team needed for the next step in their analysis. “This merger had everything we were looking for,” says Dawson. “Evidence of the clusters merging, radio relics, and supermassive black holes with accompanying jets.” 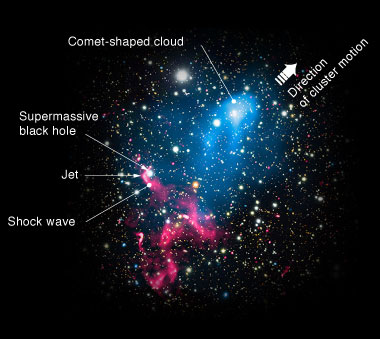 Combining radio (red), x-ray (blue), and optical (background field of galaxies) data, astronomers discovered what happens when a jet-like eruption of particles from a supermassive black hole is swept up in the collision of two galaxy clusters. The particles, initially ejected at relativistic speeds, slow down over millions of years before being re-accelerated by the shock waves of the merging galaxies. The comet-shaped x-ray-emitting cloud (top of image) indicates the hot gas of one cluster plowing through the hot gas of the other. (Image courtesy of NASA.)

The supermassive black holes feed off stars and gas, sucking in all materials, including photons, that come within their crushing gravitational fields. Accretion disks of gas form around the black holes, circling, heating up, and throwing off powerful x rays. Dawson explains, “Under certain conditions, a black hole can also produce a rotating and tightly wound magnetic ‘funnel.’ Although it may seem counterintuitive, the intense electromagnetic fields associated with these funnels can actually eject some of the particles from the accretion disks.” These particles spew out in two intense, high-velocity gas jets, perpendicular to the accretion disk.

The ejected gas particles move at relativistic speeds.As they lose energy over cosmological stretches of time, their energies decrease to the point of no longer being detectable. When these particles—pre-excited and still very energetic—tangle with the shock waves created from merging galaxy clusters, they get a second boost and are re-accelerated to relativistic speeds, resulting in the swirling radio relic structures observed near the shock fronts. 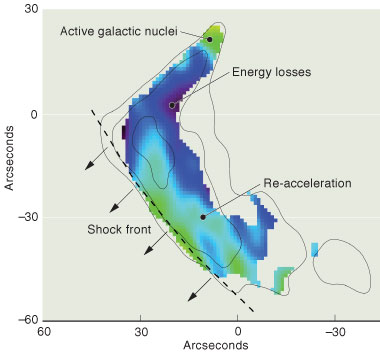 Radio data of Abell 3411 illustrate areas (purple, dark blue) where particles are losing energy as they age after being ejected from the vicinity of the black hole. At the leading edge of the shock front (green, light blue), particles are re-accelerated, creating radio relics. (Image courtesy of Reinout van Weeren.)

Dawson and the team’s research marks the first time that all of the puzzle pieces surrounding radio relics and merging galaxies were available and fit together. The research confirms and links the collision of two galaxy clusters, the ejection of relativistic particles spiraling around supermassive black holes in these clusters, the re-acceleration of particles from the shocks created by the collisions, and the formation of radio relics as a result of this process. The moment of discovery was serendipitous. “Consider,” says Dawson, “the clusters were accelerating towards each other for more than 2 billion years, with the collision occurring about 1 billion years ago from the observed state. From our Earth-bound perspective, it has taken about 4 billion years for the light from the event to reach us. This event is comparable to seeing one single frame from a very long movie that was recorded cosmological eons ago. Luckily, here on Earth, we were in the right time and place to see it.”

Many questions remain, among them, the origin of the large-scale magnetic fields in the shocks and how particle acceleration processes operate in these dilute, cosmic plasmas. To gain further insights, Dawson and others are turning to Livermore’s National Ignition Facility (NIF), which is no newcomer to this type of research. (See S&TR, December 2016, Laser Experiments Illuminate the Cosmos.) As part of a NIF Discovery Science Program study, researchers are exploring the formation and structure of collisionless shocks produced by large-scale, laser-driven plasmas. Ideally, data from these experiments will provide information about the role collisionless shocks play—if any—in generating and amplifying magnetic fields while accelerating particles.

Dawson stresses that the team’s findings would not have been possible without astronomers with expertise in different areas joining forces to interpret data from diverse data sets—radio, optical, and x ray. “By aligning the different expertise of individuals within our team, we were able to understand the importance of the complex events we were observing in the biggest particle accelerators of the universe.”