Separate but related events led to the United States’ cessation of nuclear testing and the development of the Stockpile Stewardship and Management Program. The first was the end of the Cold War—the Berlin Wall was destroyed in the fall of 1989 and the Soviet Union formally dissolved on December 8, 1991. In October 1991, the Soviet Union announced a moratorium on nuclear testing, nearly one year after its final test. The United States’ last nuclear test was conducted at the Nevada Test Site on September 23, 1992, as the Hatfield-Exon-Mitchell Amendment worked its way through Congress.

Signed into law in October 1992, the new legislation imposed a 9-month moratorium on U.S. nuclear testing and forced significant constraints on any future tests, including a maximum of 15 tests in a 4-year period. The weapons laboratories wanted to explore a wide variety of issues, the Department of Defense (DOD) stressed a focus on stockpile tests, and Congress emphasized safety. A number of senior-level meetings ensued, including an extensive classified meeting hosted by Department of Energy (DOE) Secretary Hazel O’Leary. I (Miller), then the Laboratory’s associate director (AD) for the nuclear weapons program, was the leading technical briefer. The Clinton administration took office in early 1993, extended the testing moratorium, and indicated it would seek a comprehensive test ban to eliminate all future nuclear testing.

Laboratory Director John Nuckolls had already begun preparatory steps in 1991 to develop a strategy for the nuclear weapons program in what looked to be an era of greatly reduced budgets and limited (if any) nuclear testing. My deputy AD, Wayne Shotts, and I were heavily involved in the process, as was Nuckolls’ advisory committee, which included luminaries such as Condoleeza Rice, John Deutch, and Johnny Foster.

In the spring of 1993, when the Clinton administration’s direction on nuclear testing became clearer, a small group—including the two of us, Shotts, Larry Woodruff (former AD for Military Applications), and Bill Lokke (AD for Computation)—held several meetings to lay out a tractable nuclear weapons program for the future. Toward this end, we developed a focused “Letter to the President” that encapsulated our thoughts on the matter.

In general terms, our group accepted the no-testing paradigm, acknowledged the expected decrease in resources (but nothing like what actually occurred), understood the necessity for capturing the archival history and wisdom from weapons scientists and engineers, and realized the importance of laboratory-scale experiments combined with high-performance computing (HPC). Overall, we gained substantial insight into future program scenarios—including the need for a modernized, much smaller production complex—but underestimated how radical a transformation would be required to create a politically and technically acceptable nuclear weapons program. Fortunately, Vic Reis, in his role as the new DOE Assistant Secretary for Defense Programs, provided the imagination and political acumen to guide the transition to what became known as science-based stockpile stewardship.

Reis’ genius lay in positing the general solution to the challenge of stockpile stewardship and then working backwards with different groups to acquire their input, gain support, and develop the details of the program. His major premise was that the core of any long-term stewardship program was a set of world-class scientific and technical laboratories with expertise and activities that would ensure their continued competence in all aspects of nuclear weapons. He held a two-day meeting with the weapons and science program leaders from Livermore, Los Alamos, and Sandia national laboratories to develop what the idea meant in practice.

Dick Fortner, then AD for Physics and Space Sciences, and I (Miller) were the two representatives for the Laboratory. The group concluded that the best approach in a non-nuclear-testing environment was a science-based Stockpile Stewardship Program. The goal of the program was to understand the nature of the nuclear explosive process in enough detail to evaluate and fix any problems that would arise during the lifetime of the weapons in the stockpile. Our common vision represented a shift from a nuclear-test-based confidence model to one of validated simulation. 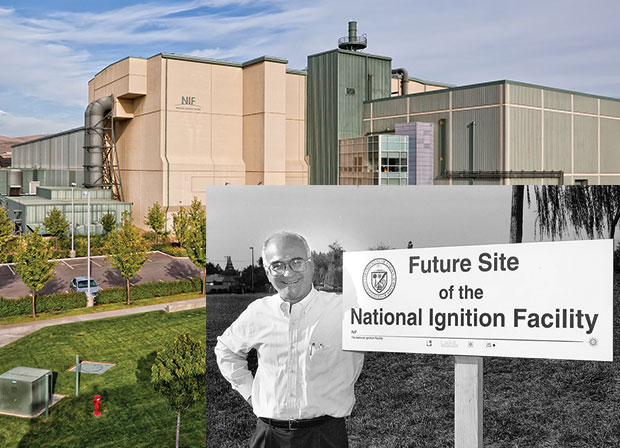 (top) The completed facility is a cornerstone of the Stockpile Stewardship Program. (bottom) Vic Reis, then Department of Energy Assistant Secretary for Defense Programs, visits the proposed construction site in 1996 for the National Ignition Facility.

Each of the three weapons laboratories would undertake a major project that was required to strengthen the science base and help maintain the vitality of the weapons program and the expertise of the people working in it. For Livermore, the project was the National Ignition Facility; for Los Alamos, the Dual-Axis Radiographic Hydrodynamic Test Facility (they would also extend their neutron scattering center to assess the possibility of accelerator production of tritium); and for Sandia, the Microsystems Engineering Sciences Applications Complex. In addition to endorsing and refining the general weapons program outline, the laboratory directors, who were brought into the next iteration of planning, helped achieve concurrence on a price tag of about $4.5 billion per year for 10 years.

Reis discussed the plan at a major town-hall meeting with more than 100 people from the national security and policy world, including DOD, the National Security Council, the Office of Science and Technology Policy, and academia. Despite some skepticism over the proposed elimination of all testing, the science-based Stockpile Stewardship Program had reasonably broad support, and meeting participants strongly endorsed the need for a major increase in HPC capabilities.

Reis and the senior members of the laboratories spent much of the next year engaging individuals and groups from the town-hall meeting to acquire additional input and gain support for the program. For example, Reis met individually with luminaries such as Harold Brown, James Schlesinger, and Brent Scowcroft; and I (Miller) had numerous discussions with DOD personnel, including an extensive session with U.S. Secretary of Defense Bill Cohen. These activities were vital in developing a broad support base for the future Stockpile Stewardship Program.

The effort reached a pivotal point at the “Confidence Conference” held at Strategic Command in June 1995. The meeting was attended by senior people from DOE and DOD including O’Leary; DOE Undersecretary Charlie Curtis; Reis; the STRATCOM Commander Hank Chiles; and Harold Smith, DOD’s lead official for nuclear matters. The general theme of the conference was whether stockpile confidence could be maintained without nuclear testing, and a particular focus was on the possible role of low-yield nuclear tests. Mike Anastasio, then Livermore’s B-Division leader, gave the principal talk and presented the technical pros and cons for various options. The summary session did not result in consensus, but all the issues were clearly delineated, as were the views of the various participants.

In mid-July the laboratory directors, Curtis, Reis, and Anastasio (the technical briefer), had sequential meetings with General John Shalikashvili, Chairman of the Joint Chiefs of Staff, and Anthony Lake, the National Security Advisor for President Clinton. As Laboratory director, I (Tarter) attended the meeting with Shalikashvili, which was intense and explored all of the technical and policy matters in depth. Shalikashvili seemed impressed by the level of effort and thoroughness that had gone into planning the Stockpile Stewardship Program. Afterwards, Los Alamos Director Sig Hecker noted the curious fact that among the three laboratory directors and Shalikashvili, I was the only native-born American involved in the conversation. 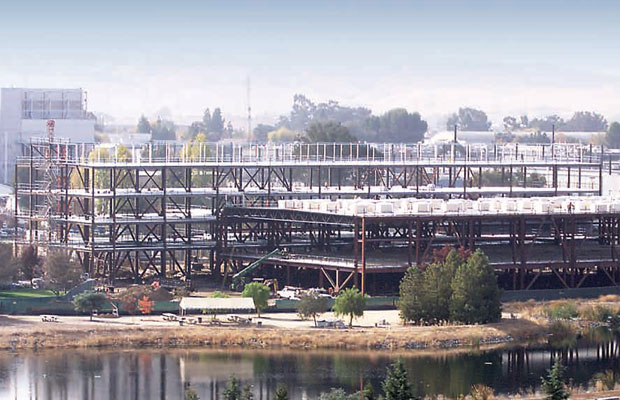 Early in August, Curtis called each of the laboratory directors individually for a lengthy classified discussion. He wanted to know whether our respective laboratories could accept the challenge of a comprehensive nuclear-test ban and if there were any conditions to such an acceptance. I said that Livermore would welcome the challenge, but I was concerned that the resource level not be reduced and that we be treated on an equal basis with the other two weapons laboratories (in contrast to the recommendation of the Galvin committee). We talked about many other issues, and he thanked me for my input. Incidentally, it was the only time in my career that I entered the Laboratory without a badge. I was called back (to the Laboratory) from a doctor’s appointment and told not to go home first to get my badge—I was just waved through!

On August 11, 1995, President Clinton announced his decision to seek a zero-yield Comprehensive Nuclear-Test-Ban Treaty. An extremely important component of this announcement was his inclusion of six safeguards upon which the treaty was conditioned. The first two safeguards mandated a strong Stockpile Stewardship Program and strong nuclear weapons laboratories and facilities (explicitly mentioning  outstanding staff). The next three dealt with readiness, treaty monitoring, and intelligence gathering. The last, known as Safeguard F, spoke to the possibility of failure. It stated that if confidence in the safety or reliability of a weapon type critical to the deterrent could no longer be certified, then the U.S. president would recommend withdrawing from the treaty for the supreme national interest.

On September 25, President Clinton further issued a signed directive stating: “To meet the challenge of ensuring confidence in the safety and reliability of our stockpile, I have concluded that the continued vitality of all three nuclear weapons laboratories will be essential.” At that moment stockpile stewardship was launched, with Livermore as a full partner, and as is often said, the rest has become history.