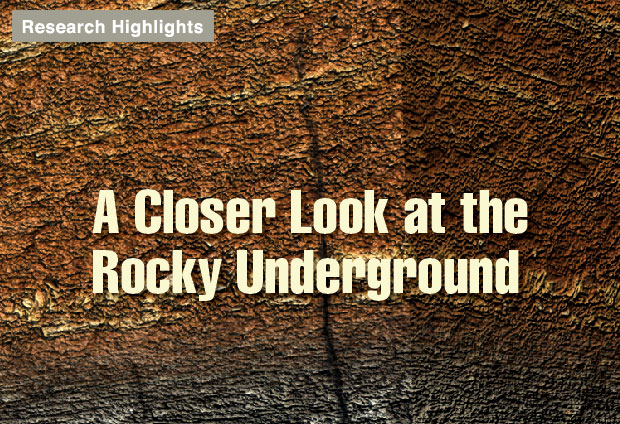 Over the last several years, the U.S. has begun tapping its enormous domestic reserves of shale gas and oil using hydraulic fracturing techniques. In fact, just a few months ago, the U.S. surpassed Russia as the largest supplier of natural gas in the world. Hydraulic fracturing, also known as hydrofracturing or fracking, promises to provide the nation with an inexpensive and abundant source of energy that is significantly cleaner to burn than coal, the most widely used energy source today.

In conventional hydrocarbon deposits, oil and gas fill a spongelike trap in rock, making extraction relatively easy. In contrast, shale oil and gas reside in extremely tight rock that must be broken up so the fluids trapped within can flow. A hydrofracturing well travels vertically to the depth of a shale gas deposit and then proceeds horizontally for many kilometers. A combination of water, chemicals, and sand is pumped through the well bore and into the rock at engineered intervals. Under very high pressure, the mixture forces open small fractures in the rock, with the sand acting as a collection of tiny wedges—known as proppants—that keep the fractures open.

This “stimulation” process succeeds when the pressure of the injected materials exceeds the minimum horizontal stress of the rock. Hydrofracturing greatly increases both the rate and total amount of oil or gas that can be extracted. The method was developed in the 1940s, but it was rarely used until American geologists became aware of the huge volumes of gas-saturated sandstones with permeability too low for economical recovery. Modern fracturing matured in the 1980s and 1990s through several joint industry–Department of Energy projects. Use of hydrofracturing grew rapidly in the late 1990s when energy companies learned how best to stimulate the extraction of shale gas from the Barnett Shale in north Texas. Today, underground deposits previously considered difficult or even impossible to access are being extracted because their permeability has been enhanced through hydraulic fracture stimulation.

One challenge, however, is that well operators generally have limited information about the fractures they are creating. They cannot predict which fractures will develop or how a fracture will perform. Developing geologic simulation tools for oil and gas extraction is extremely difficult, given the complex physical processes at work in the reservoir and the range of temporal and spatial scales involved—from seconds to years and micrometers to kilometers. Uncertainty about a reservoir’s properties or the stress conditions within the rock at a distance from the fractures adds to the complexity. For conventional oil and gas extraction, industry typically depends on simulations based on extensive field experience. This method works extremely well when the operation is mature with an accompanying large database. However, an operation in a new locale presents significant challenges, with engineers having to fall back on trial and error.

“Livermore experts are addressing these challenges,” says Ryerson. “With our decades of experience in underground nuclear testing, the Laboratory is well acquainted with the best means of analyzing the aftereffects of high-pressure underground activity. We have a great deal of knowledge about how rocks break.” GEOS code authors Scott Johnson, Randolph Settgast, Pengcheng Fu, Stuart Walsh, and Joshua White have combined Laboratory expertise in geomechanics, seismology, and high-performance computing to examine fluid-induced rock fracture propagation in the shale gas setting. Their aim was first to understand the dominant mechanisms and sensitivities involved and then to provide practical, real-time guidance for optimizing extraction operations. The team’s three-dimensional GEOS code can simulate subsurface fracture networks in a variety of geologic settings.

The oil and gas industry has taken note, and several companies are partnering with the Laboratory to use GEOS, which is a more expansive and higher fidelity code than current commercial codes. To date, Baker Hughes, ION Geophysical, Shell Exploration & Production, and ExxonMobil have partnered with Lawrence Livermore. 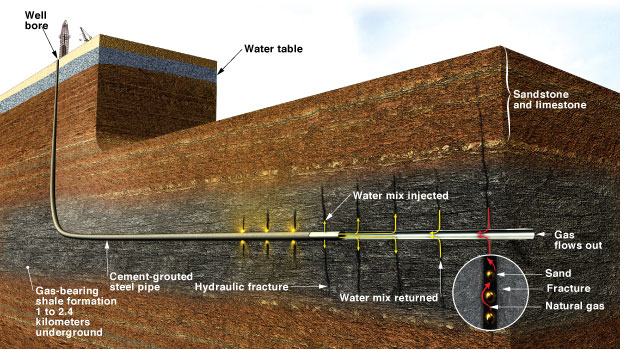 Oil and gas production in shale and other low-permeability rocks requires the hydraulic stimulation of vertically oriented, radial fractures that emanate from a horizontal well bore. Natural gas flows from the fractures in the shale into the pipe and to the surface. (inset) Proppants, typically sand or ceramic spheres, hold the fractures open. (Rendering by Kwei-Yu Chu; not to scale.)

Johnson likens a successful geomechanics simulation code to a pair of video cameras that have different lenses and can speed up or slow down the frame rate as the situation changes. One camera is kept on time-lapse mode to survey long-term overall behavior. A high-speed camera zooms in on an area of interest when something starts to happen, and its feed is then synchronized with that of the time-lapse camera. Together, they provide a more complete view of a scene, eliminating the need to observe the entire scene at high spatial and temporal resolution. Simulations can be performed in a similar way by splitting operations over different temporal and spatial scales and by applying different physical models at each scale. This type of adaptive scaling is an essential feature of the GEOS computational framework.

Coupling between physics models occurs in a similar manner. Most of the time, the hydraulic behavior of rock with preexisting joints and fractures is governed by slow flow through the rock’s natural porosity. When the reservoir is being stimulated under pressure, the temporal scales are dramatically reduced, and faster fluid-driven fracture propagation replaces the slower behavior. The microseismic events that happen when a fracture occurs are passed off to a wave propagation code for predicting ground motion. Similarly, an asymmetric permeability tensor, which defines fluid flow direction, can be passed off to fluid and thermal transport codes for longer-term production estimates.

The only way to “see” where fractures are occurring in shale is to locate the microseismic events that accompany each fracture. Each such “earthquake” is typically comparable to the energy of a milk jug falling off a table. Every microseismic event—whether from a new fracture or caused by changes to an existing fracture—must be tracked. But rather than incorporate the real geometry of each microcrack, continuum damage mechanics allows for GEOS to predict the statistical average response of cracked solids. In this way, GEOS can translate fine-scale cracking effects to larger scales.

GEOS also applies uncertainty quantification to predictions of reservoir stimulation. Uncertainties include operational parameters as well as a range of uncertainties about the reservoir’s geologic model. Livermore has been a pioneer in the development of solvers for handling uncertainty in a system. The work began with quantifying uncertainties in nuclear weapon systems and has since spread to global climate research and other disciplines. The GEOS team has linked the code with the Laboratory’s PSUADE code, a suite of uncertainty quantification modules that addresses high-dimensional sampling, parameter screening, global sensitivity analyses, optimization, and other important factors. In summary, says geologist Roger Aines, “GEOS accounts for all the physics we know, in three dimensions.” 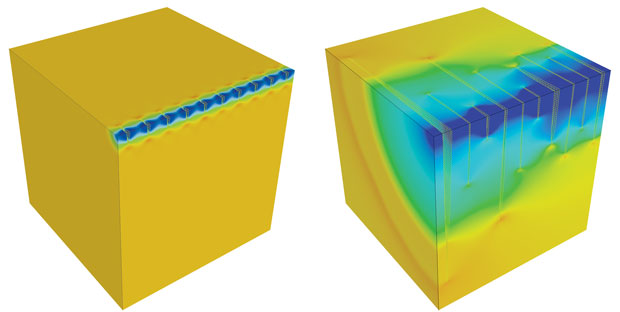 (left to right) Two snapshots of a GEOS simulation illustrate the growth of 10 simultaneously pumped, hydraulically driven fractures in shale.

Since the shale gas boom began, the price of natural gas has dropped, which is in sharp contrast to the soaring price of gasoline. If heavy trucks—which now run largely on imported diesel fuel—could be made to run on compressed natural gas, the savings would be enormous. Yet, despite the benefits that may accrue from replacing coal and gasoline, including more than a 50-percent reduction in carbon dioxide emissions, shale gas extraction faces environmental opposition. Hydrofracturing uses large quantities of water that must be trucked to a well field. Disposing of used water and chemicals by pumping them into the subsurface has caused noticeable seismic activity.

As part of the Laboratory’s larger efforts to increase fracturing efficiency and decrease environmental impacts, researchers are also looking at ways to replace sand proppants. Sand is heavy and requires heavy “goo” to transport it. If a light proppant could be developed, clean water alone could be used to transport proppants to the subsurface, without the added chemicals. The clean water could be returned to the surface, eliminating the need to pump used goo underground for disposal.

The Laboratory’s additive manufacturing team is developing a lightweight proppant microcapsule with a shell made of the same material as the heat-resistant spatulas used in kitchens. This creative team has also taken an experimental sample of actual rock, imaged it, and printed an exact duplicate in clear plastic so they can watch in real time how new proppants behave. Livermore’s multidisciplinary team of scientists and engineers is thus working to increase the efficiency and reduce the environmental footprint of the nation’s domestic oil and gas production from hydraulic fracturing techniques.